American medals for the Bulge 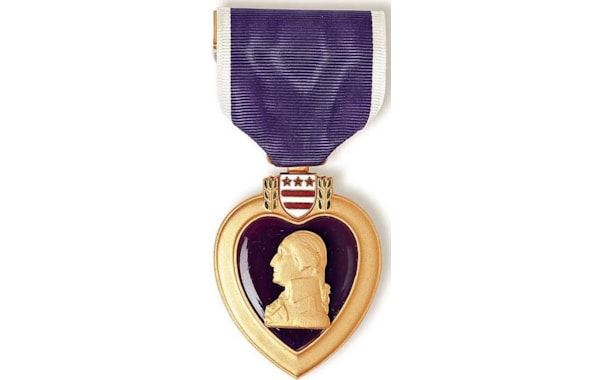 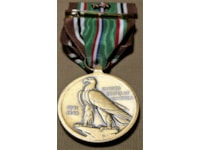 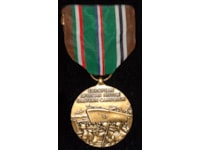 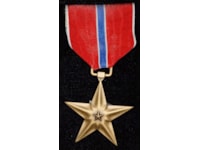 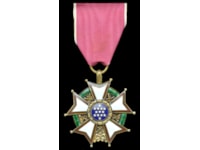 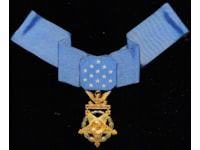 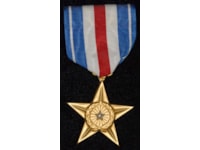 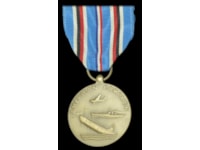 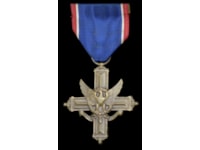 Peter Duckers looks at the range of US army medals awarded for fighting in the Ardennes region.

The Battle of the Ardennes, or Battle of the Bulge as it came to be known, was the greatest land battle waged by the US Army during the World War II, generating their heaviest casualties; of approximately 600,000 US troops engaged, nearly 90,000 became casualties, with approximately 9,000 killed. It should also be remembered that the battle also involved over 55,000 British and Canadian forces.

Contrary to the received wisdom that the Americans tend to create medals fairly freely, their actual campaign awards for World War II were surprisingly very limited. Apart from the American Campaign medal, largely awarded for service in the US and across its sea borders, the United States awarded only two general medals for all theatres of the war: the Asiatic-Pacific campaign medal for the Pacific Islands, Chinese, Philippine and mainland campaigns in the Far East, and the European-African-Middle Eastern Campaign medal, which, remarkable as it seems, covered service all US operations in the West, including North Africa (eg Operation Torch), Italy, North-West Europe (including D-Day and the Ardennes) and other areas. Unlike the US award for the Western Front for 1917-18, no distinctive campaign or battle clasps were awarded, so that no soldier of the Ardennes battles of 1944-45 wears anything to distinguish that service.

The European-African-Middle Eastern Campaign medal was authorised on 6 November 1942 by order of President Roosevelt. Initially awarded just as a service ribbon which could be worn in uniform during the war, it was not until September 1946 that the actual medal was designed, and the first sample was completed in July 1947. Its first recipient was General Eisenhower, in recognition of his service as Supreme Commander of the Allied Expeditionary Force during World War II.

The medal was made of bronze, a standard 13/8in width. The obverse was designed by Thomas Hudson Jones and based on General Eisenhower’s request that the medal should include an invasion scene. It depicts a landing craft, with troops coming ashore under fire, with an aeroplane in the background, below the words ‘EUROPEAN AFRICAN MIDDLE EASTERN CAMPAIGN’. The reverse, designed by Adolph Alexander Weinman, is identical to that carried on the Asiatic-Pacific medals and shows an American bald eagle between the dates 1941-1945 and the words ‘UNITED STATES OF AMERICA’.

Ribbon emblems were awarded with this medal. Small bronze stars or Battle Stars were granted to those who participated in one or more of 16 designated major operations (like D-Day) or in three general service areas, such as air combat, and more than one emblem could, of course, be worn. The fighting in the Ardennes was one such designated campaign.

Apart from this small range of general campaign awards, the US, of course has its own well-established system of decorations for its Army, Navy, Marine and air personnel covering all types of gallantry, distinguished and meritorious service. One of the best-known of these is the Purple Heart, given to those who are wounded or injured on service. Although originally instituted as early as 1782 by George Washington himself, the award lapsed until it was revived in 1932 under the auspices of General Douglas McArthur and was made retrospective for WWI. It is believed that over a million were conferred for WWII and the medal is still conferred.

In terms of Army gallantry awards, the most high ranking and well known is the Medal of Honor (sometimes referred to as the Congressional Medal of Honor, since it is awarded by the President in the name of Congress). It was initially founded in 1861 during the Civil War as a Navy award, and in 1862 as an Army version. Like the British Victoria Cross, it is conferred only for the highest level of gallantry in action and has been awarded to approximately 3,500 different recipients to date. A total of 461 were awarded for WWII and of these no fewer than 17 were conferred for the Battle of the Ardennes, all to the Army and some posthumously.

The recipients of the U.S. Medal of Honor for the Ardennes were:

The citations reflect the courage and achievements of their recipients but as space does not allow the publishing here of details of all their actions, perhaps one example will suffice to show the extraordinary degree of gallantry and devotion to duty which the Medal of Honor exemplifies. Since the fighting at Malmedy is famous amongst the actions of the Ardennes – and infamous for the massacre there of US prisoners of war – the citation for Sergeant Francis Currey of the 120th Infantry might stand as an example. Only a few days after the beginning of the German onslaught on 16 December: ‘[Currey] was an automatic rifleman with the 3rd Platoon defending a strong point near Malmedy, Belgium, on 21 December 1944, when the enemy launched a powerful attack. Overrunning tank destroyers and anti-tank guns located near the strong point, German tanks advanced to the 3rd Platoon’s position, and, after prolonged fighting, forced the withdrawal of this group to a nearby factory. Sgt. Currey found a bazooka in the building and crossed the street to secure rockets, meanwhile enduring intense fire from enemy tanks and hostile infantrymen who had taken up a position at a house a short distance away. In the face of small-arms, machine-gun, and artillery fire, he, with a companion, knocked out a tank with one shot. Moving to another position, he observed three Germans in the doorway of an enemy-held house. He killed or wounded all three with his automatic rifle. He emerged from cover and advanced alone to within 50 yards of the house, intent on wrecking it with rockets. Covered by friendly fire, he stood erect, and fired a shot which knocked down half of one wall. While in this forward position, he observed five Americans who had been pinned down for hours by fire from the house and three tanks. Realizing that they could not escape until the enemy tank and infantry guns had been silenced, Sgt. Currey crossed the street to a vehicle, where he procured an armful of antitank grenades. These he launched while under heavy enemy fire, driving the tankmen from the vehicles into the house. He then climbed onto a half-track in full view of the Germans and fired a machine-gun at the house. Once again changing his position, he manned another machine-gun whose crew had been killed; under his covering fire the five soldiers were able to retire to safety. Deprived of tanks and with heavy infantry casualties, the enemy was forced to withdraw. Through his extensive knowledge of weapons and by his heroic and repeated braving of murderous enemy fire, Sgt. Currey was greatly responsible for inflicting heavy losses in men and material on the enemy, for rescuing five comrades, two of whom were wounded, and for stemming an attack which threatened to flank his battalion’s position.’

Just below the Medal of Honor in status is the Distinguished Service Cross, created in 1918 and awarded to Army personnel for ‘extreme gallantry and risk of life in actual combat with an armed enemy force’. Actions that merit the Distinguished Service Cross must be such that they rise above those required for all other US combat decorations but do not meet the criteria for the Medal of Honor.

The Cross is made of bronze, 2in high and  113⁄16in width, carrying an eagle on the centre with a scroll below, bearing the inscription ‘FOR VALOR’. On the reverse, the centre of the cross is circled by a wreath and has a space for engraving the name of the recipient. During World War II, just over 5,000 awards were made and a few recipients received two or even three medals. One of the multiple recipients of the DSC who fought in the Battle of the Bulge was Lieutenant-Colonel Creighton Williams Abrams, Jr. who became one of the heroes of the battle.

Commanding part of the spearhead 4th Armored Division, Abrams was ordered by General Patton, commanding the US Third Army, to ‘drive like hell’ to relieve elements of the 101st Airborne Division, famously besieged at Bastogne. But held up by the German 5th Fallschirmjäger (Parachute) Division, along with landmines, shell craters, snow, fog, and icy roads, his column made little progress and, when still five miles short of its goal, was down to 20 tanks, enough for just one more assault. His dilemma was whether or not to risk a direct rush for Bastogne, regardless of the strength of enemy opposition, or wait for further reinforcements to arrive. Seeing waves of Douglas transports parachuting supplies into Bastogne, Abrams decided to take the risk and continue forward; from his Sherman tank, Thunderbolt IV, he ordered an immediate advance, with his famous order, “Let ’er roll!”

As artillery fire pounded the immediate objective, the village of Assenois, Abrams’s battalion rumbled forward through woodland, with half-tracks filled with infantrymen following the tanks. Shortly before 5pm, they reached the Bastogne perimeter and shook hands with the defenders. Thus were the ‘Battered Bastards of the Bastion of Bastogne’ relieved.

Abrams’ many decorations included two Distinguished Service Crosses, two Silver Stars and the Legion of Merit and, after further high commands in Korea, Germany and Vietnam, he rose to become Army Chief of Staff in 1972, two years before his early death.

Other high-ranking US Army gallantry awards include the well-known Silver Star and Bronze Star. The Silver Star (officially the Silver Star Medal) was authorised in 1942, ranking below the DSC in the US system of awards and was granted ‘for singular acts of valor or heroism’ over a brief period, such as one or two days of battle. It actually comprises a gold five-pointed star, with a small silver star superimposed in the centre. Its plain reverse has a space for the engraving of the recipient’s name, below ‘FOR GALLANTRY IN ACTION’. The ribbon consists of stripes of red, white and blue, reflecting the colours of America’s flag, Old Glory. Second and subsequent awards are denoted by bronze or silver oak leaf clusters on Army and Air Force awards.

The lower-ranking Bronze Star was established by on 4 February 1944. Like the Silver Star, it was designed by Rudolf Freund (1878-1960) of the jewellers Bailey, Banks and Biddle, who designed a number of other US awards, like the Legion of Merit. The 38mm bronze star has, at its centre, a superimposed smaller bronze star and its reverse carries the inscription ‘HEROIC OR MERITORIOUS ACHIEVEMENT’, with space to engrave the name of the recipient. Its ribbon has stripes of white, scarlet and white, with a centre of ultramarine blue, then again white, scarlet and white.

Since the Star can be awarded for a range of services, a V device is worn on the ribbon to denote gallantry – ‘participation in acts of heroism involving conflict with an armed enemy’ – and oak leaf clusters identify additional awards in the Army or Air Force.

Most US awards below the level of Medal of Honor are easily and cheaply available on the collectors’ market. However, contrary to general opinion, many higher-ranking US awards are officially named, generally in a range of engraved styles, and such awards, especially where they are accompanied by official award documents or original papers, can command very healthy prices. Those for the arduous Ardennes fighting are no exception.

Read the full story of the Battle of the Bulge here.

Read about collecting the uniforms of the Panzer crews here.