A member of an unknown King’s Royal Rifle Corps battalion. He is clearly showing his regimental title, rank and his function as a bomb thrower

David Bilton looks at some of the many different shoulder titles used by the British Army in World War I.

Around 1881, the British Army began using metal shoulder titles, initially however, only on officers’ tropical uniforms. At the same time as khaki drill uniforms were issued in 1885 to troops serving in India, other ranks also began to wear them but, in Britain, other ranks’ tunics continued to have the regimental title stitched into the strap in white thread - some would be cut out in 1914 to provide unit identity for Kitchener battalions. When a new service dress was introduced in 1902, a cloth shoulder title replaced the metal numeral: this was short-lived but continued to be worn by some Territorial units up to and during the war. In 1908 they were replaced with a metal shoulder title which was worn until war-time economy necessitated a change to cloth. Only the Guards, in 1914, reverted to cloth titles, but some still wore metal titles and some even wore both. 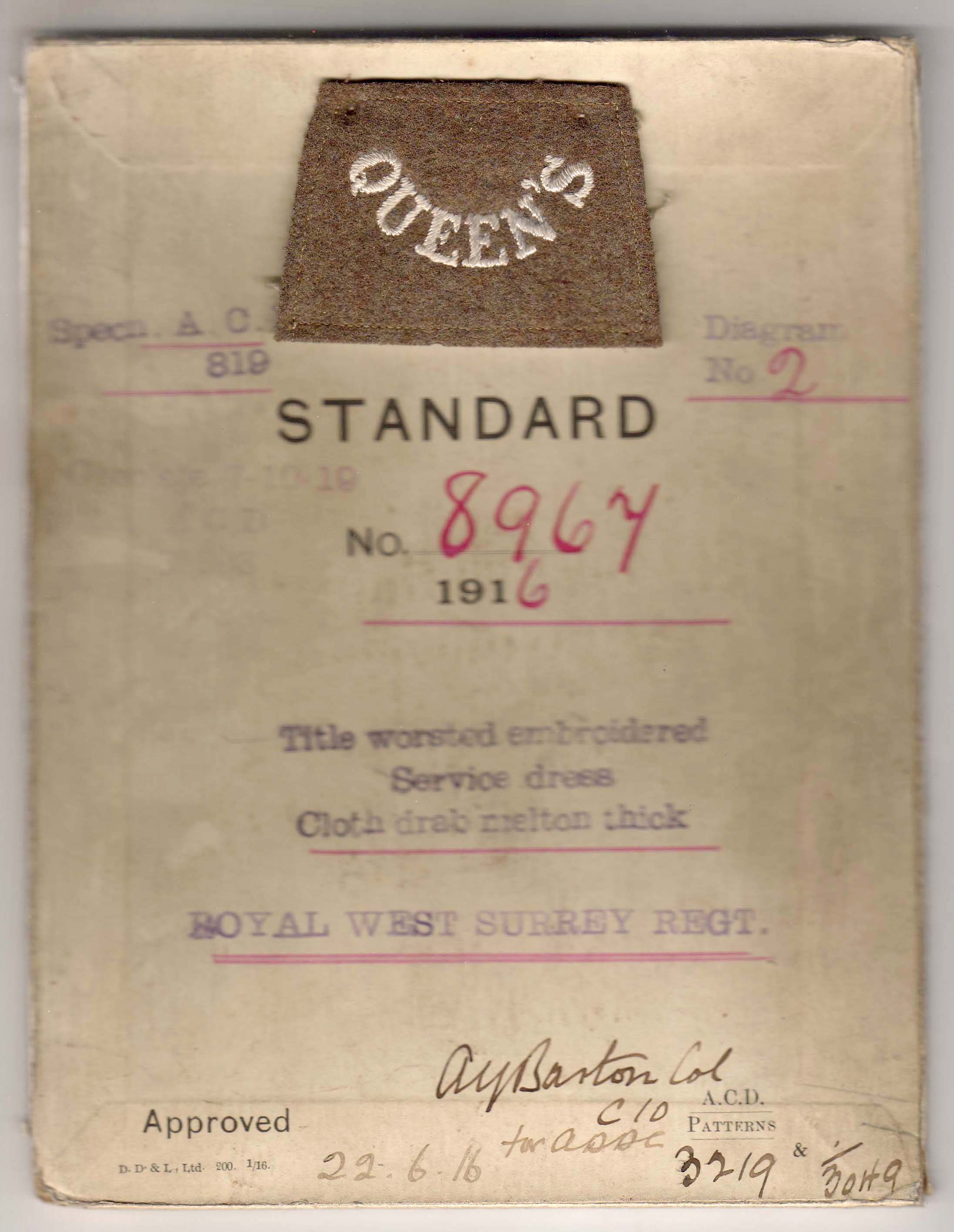 LEFT: Each new cloth badge was approved and sealed. This is how they were stored and described. Although sealed there are often variations on each badge

The clothing regulations stated that they were to be worn on both straps, the lower edge being ½in above the seam joining the strap to the sleeve. Where a badge was also worn, the lower edge was to be ¼in from the seam. They were to be worn on service dress, khaki drill jackets and greatcoats. This was in a peacetime army. When looking at Great War soldier photographs now we can see how many of them matched the regulation distance and how many wore them on greatcoats. There was nothing in the regulations to stop them being used as collar badges when wearing Kitchener blue uniforms – cap badges were in short supply – or for an officer to wear them. It was normal in the King’s Royal Rifle Corps for officers to use a blackened version of the standard KRR shoulder title as a collar badge. 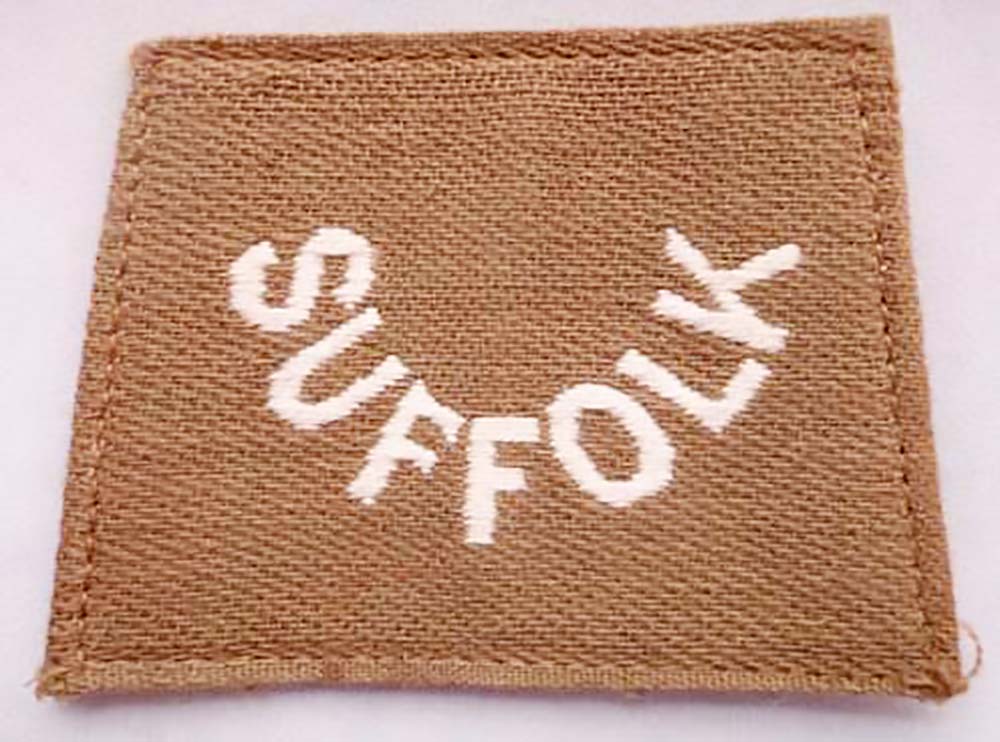 RIGHT: This Suffolk Regiment title was worn by troops stationed in warmer climates; it was not a sealed pattern

In 1914 the British Army went to war wearing regimental cap badges and shoulder titles as did the Territorials. However, they all wore their own unique titles, which showed their regiment as well as their battalion number. As new battalions were raised at home, most wore the badges of the regulars, but some were granted the right to wear special shoulder titles to reflect their origins. These became the sign of a veteran as the war progressed because new men were issued the standard title. 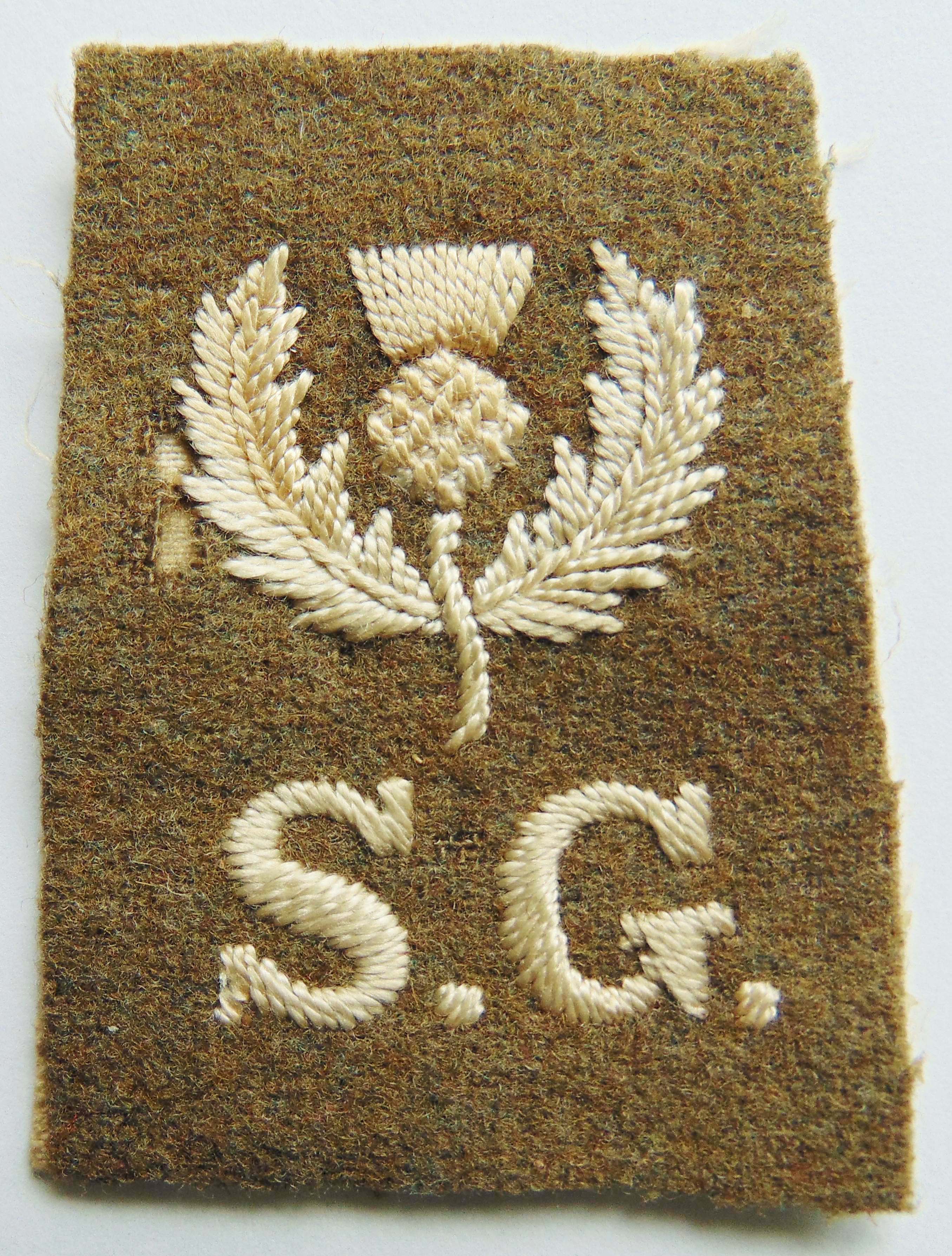 LEFT: Some cloth shoulder titles were stitched in place like that of the Scots Guards

The war placed a tremendous strain on men and resources, particularly metals. As a result, the first casualty was the cap badge which, after March 1916, was made only of one metal. This was followed just months later by sealed patterns of cloth shoulder titles in white thread on Melton cloth, all of which were obsolete by 1922, thus dating them to the Great War. During the occupation of Germany, battalion and divisional signs quickly fell into disuse and the cloth title at the top of the arm was sufficient identification. For many men, they were not good enough and every effort was made to keep their metal title and, if necessary, to buy one when supplies became available. 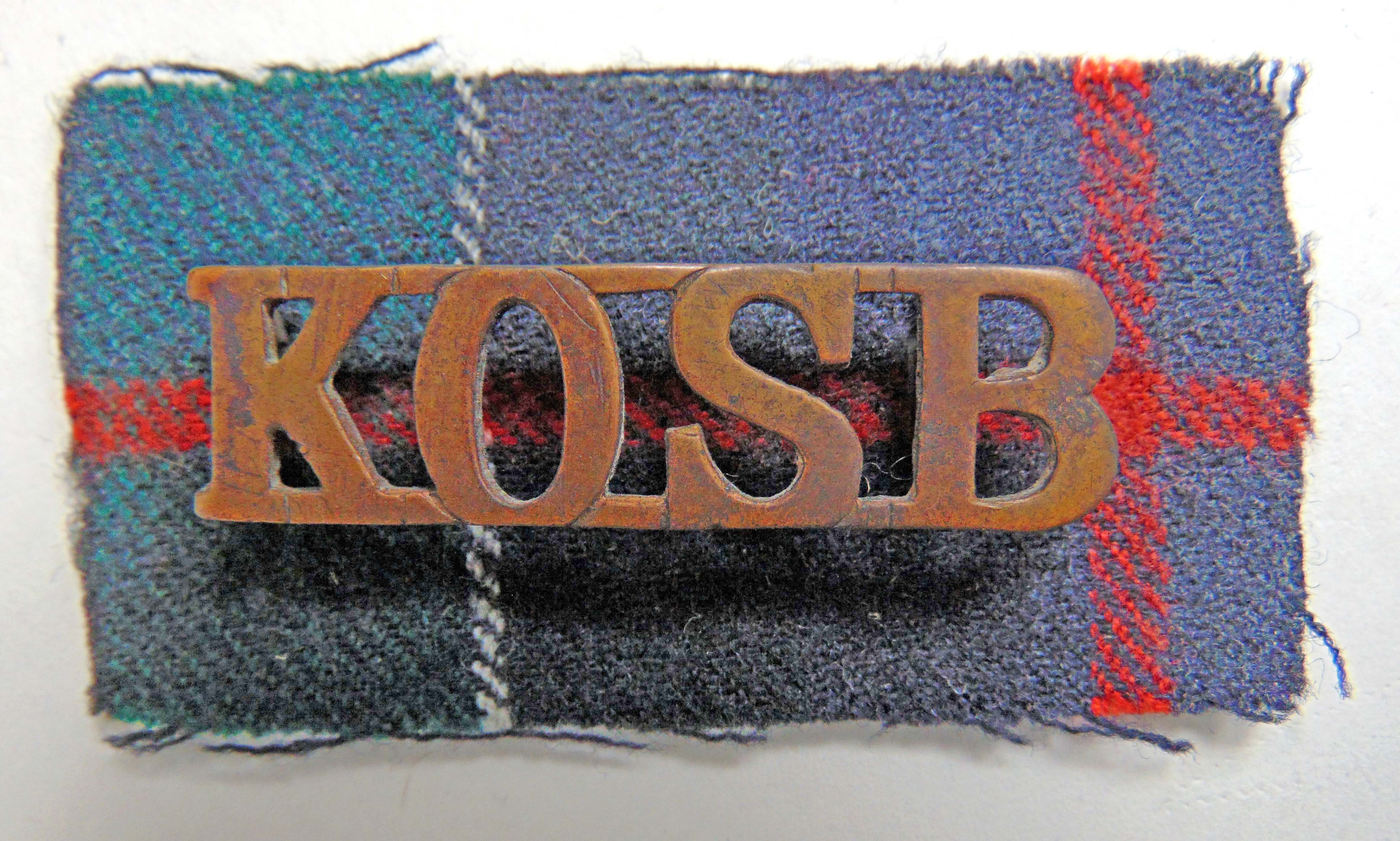 LEFT: The 7/8 Battalion King’s Own Scottish Borderers wore their identifying badge behind the shoulder title

Although technically sealed, this did not stop a wide range of manufacturing varieties appearing during the course of the war that were made with different cloths and lettered in different styles: some explained by the theatre of wear and manufacture. The many variations make collecting them more interesting than metal titles, which are usually identical to each other. An added collecting interest is the reverse, there were many different types of loop used to hold them on the strap and some had one loop, others two.
Like their metal counterparts, they were for wear on the shoulder straps, but this did not stop them being worn on the upper sleeve, like 12th Manchester Regiment which made it part of their battalion badge. Indeed, it became common to stitch it at the top of the arm leaving the shoulder strap empty. The cloth title had two advantages over metal. Firstly it did not need to be cleaned and secondly it did not glitter in the sun and give away the wearer’s position. 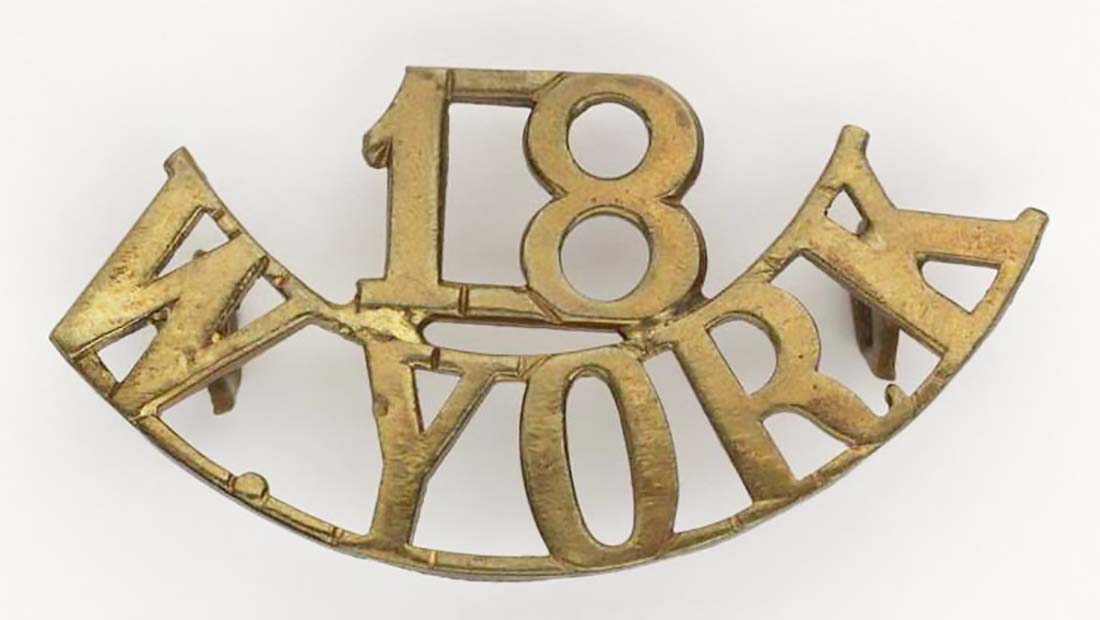 While Territorials had worn their own specific metal titles their manufacture had quickly been reduced, with most wearing standard numerals, as the titles were known, by the end of the war. Indeed, wearing a three-tier title had quickly proved to be a hazard with the ‘T’ at the top catching on webbing straps and often getting ripped off. Some men removed the Territorial title altogether, relying on their cap badge for identification and the single letter ‘T’ on their shoulders. While no Melton cloth titles were authorised for Territorial battalions this did not stop them wearing them. They were especially common among the London Regiment, with most having a cloth arc and cap badge to identify them from the other London Battalions in the division. 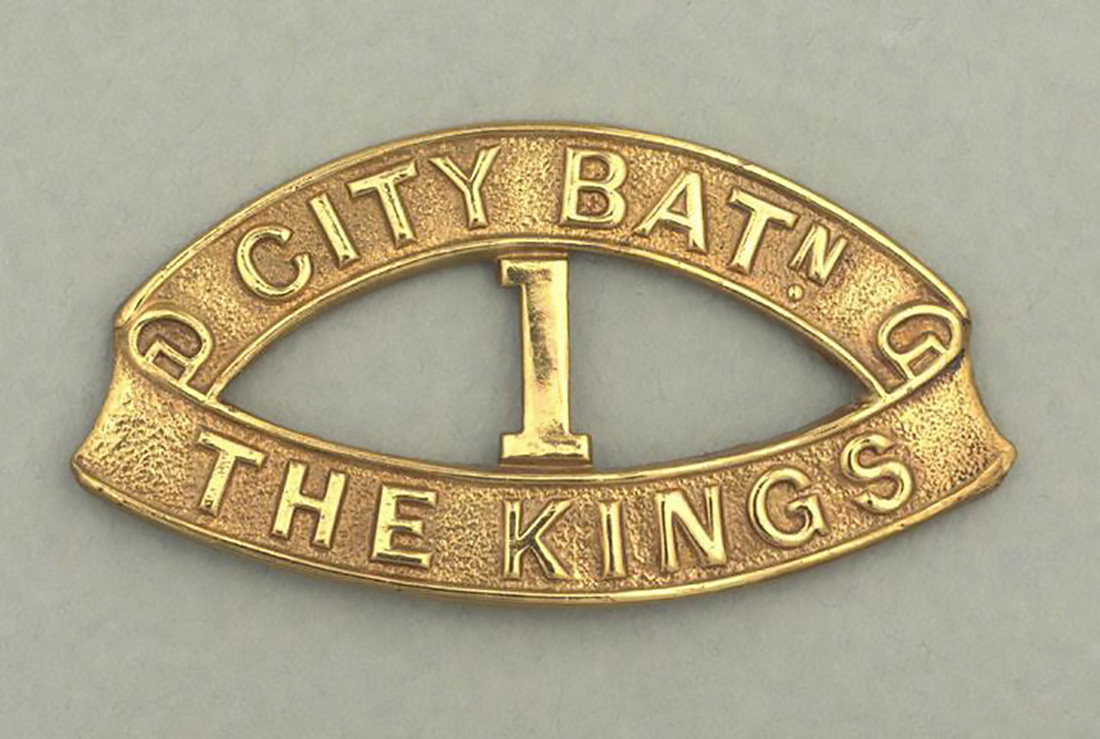 The Guards wore both metal titles and cloth numerals to show their battalion or a cloth arc with numerals. While such titles are not common among standard infantry some battalions did wear a specific battalion title like 6th Royal Scots Fusiliers or 11th Border Regiment. Two Irish battalions simply wore their number on the shoulder strap without a title.
When the war was over, regiments quickly returned to the use of brightly polished metal titles as soon as they became available.

COLLECTING
Metal shoulder titles are one of the most readily available badges on the market. Unfortunately unless it is a war-only special, it is not possible for the most part to say that it is definitely from the Great War. Many were manufactured from 1908 up to the introduction of Staybrites. As a result most sell at pocket money prices. Territorial badges, which were worn for a much shorter period, are more collectable and command higher, but still affordable, prices.

As the unique titles were only produced for a short period and many are buried on the Western Front, genuine items are difficult to find and can be very expensive.
Melton cloth titles were produced in the thousands and, even recently, come on to the market looking brand new and in large bundles. Standard titles are at pocket money prices, but the more unusual regiments like the Yeomanry command quite high prices, as do titles to Territorial battalions. 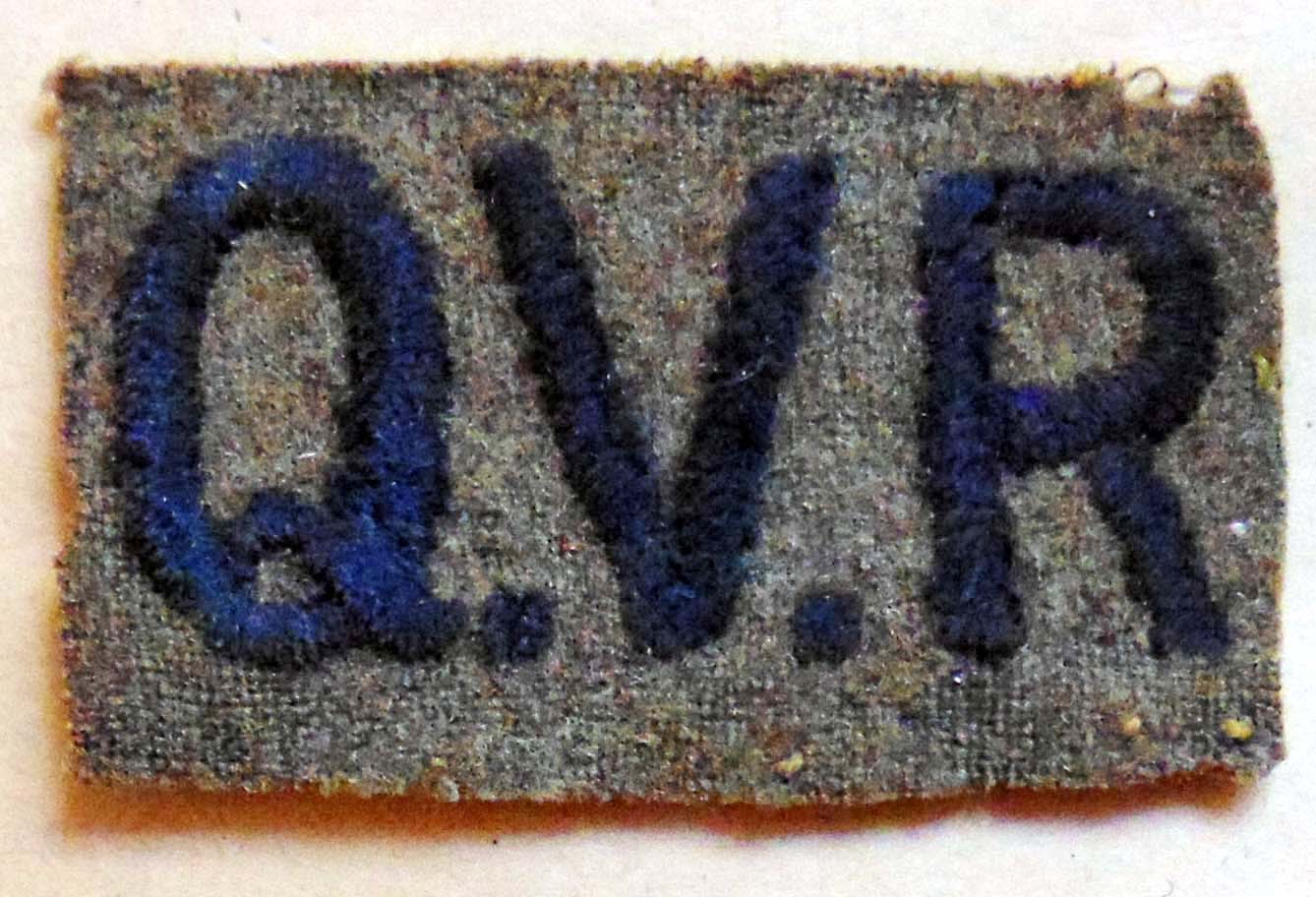 LEFT: Many of the London Regiment battalions wore a cloth badge. This black on khaki rectangle was worn by members of the 9th (County of London) Battalion, Queen Victoria’s Rifles