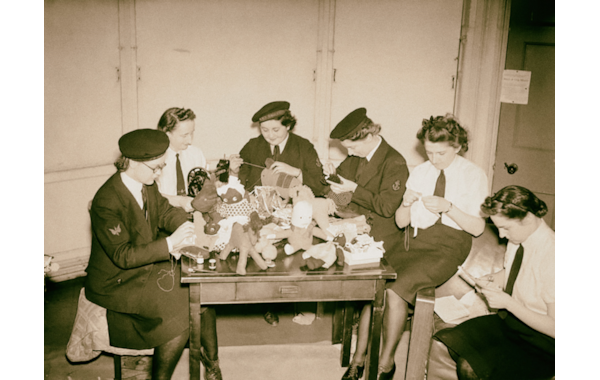 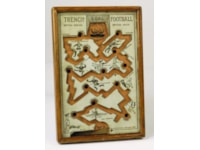 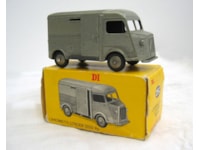 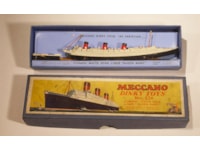 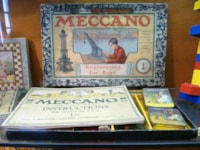 George Prescott describes how both world wars influenced toys and their manufacture.

During wartime, manufacturers of non-essential and luxury items faced significant production problems, having to compete for materials and factory space with the more important wartime industries.

This was particularly true of the toy industry, with many toy companies also finding more profit in turning to essential war work, which limited the number and quality of toys available to retailers.

In WWI, this did not present a major problem. Children from rich families could still have toys if their parents were willing to pay for them and those from poorer families were little affected because they had always made their own toys. More importantly, air raids and civilian casualties were not a significant feature of the Great War and efforts to bolster morale in Britain were usually confined to government manipulation of the media aimed at the adult population, with children not really being a part of the propaganda equation.

However, things were quite different in 1939. Children in the major cities soon began to be subjected to almost nightly bombing and they needed toys and games both as a distraction and morale booster. Consequently, Sir William Stephenson, chairman of Woolworths and also head of Aircraft Production for Churchill’s government was instructed to find a source for materials to increase toy production. He went to his boss, Lord Beaverbrook, then publisher of the Daily Express, and asked for his help in supplying paper pulp that could be turned into toys and games. Beaverbrook agreed but only on condition that Woolworths held the price of their toys at sixpence (2½p) for the duration of the war. Stephenson accepted those terms and toys Woolworths were able to produce and sell included: a cardboard boxing game which pitted a super-strong Winston Churchill against a rather feeble Adolf Hitler, a selection of Lumar patriotic jigsaw puzzles and a number of popular card games. These cheap cardboard and paper toys became increasingly important as the war progressed because, from 1942, the toy industry was not allowed to use metal. Consequently this marked the end of war production for companies such as Meccano (Hornby), Dinky and Britains and saw the absence of their newer products from the shelves of retailers like Woolworths and Hamleys.

Woolworths was not the only toy retailer operating during WWII but as fighting went on, pre-war stocks began to be depleted and, with toyshops beginning to find it hard to refill their shelves, children turned increasingly to their own devices. One way in which these shortages were alleviated was by swapping unwanted toys for something more desirable and children were also very clever at making their own playthings. One individual, who was just five in 1942, remembered, “Toys were virtually non-existent, so we had to make our own. Stilts were popular. They were two long pieces of wood with footrests screwed three or four foot from the ground. Another toy was the sword. Two kids would put their pocket money together and buy a broom handle. Then they would cut it in half. Each would whittle one end down to a blunt point. Four inches from the top, nail on a tee bar and, with a lid from a dried milk tin, make a guard.”

While toys with some wartime provenance are collectable, unless they were, for example, the property of some well known figure, prices vary little from similar, pre-war products.

As might be expected, military toys such as guns, vehicles and especially toy soldiers were amongst the most popular items with children during both wars, although many of the toys of this type which are encountered have a pre-war origin.

Serious commercial production of military figures, soldiers, horses and even equipment began in Britain during 1893, when William Britains patented a process for hollow casting toy figures which reduced costs and so increased their popularity. Britain’s soldiers and farm sets became increasingly popular, becoming the industry standard until well after WWII, although production had to cease in 1941, when the factories began making munitions.

William Britains’ lead soldiers from both conflicts are plentiful, although not cheap, reflecting their extreme popularity with collectors. Other manufacturers include Hanks Bros. and John Hill and Co (aka. Johillco).

All values listed in each section are for toys in good condition, although values will also depend upon provenance and the quality of the packaging.

Individual figures or equipment from WWII: £2-£10

Military vehicles were another popular toy both during and between the wars. Dinky toys, a subsidiary of Meccano, was the major British manufacturer of tinplate and die cast vehicles during this period, although the first vehicles in the Meccano Dinky toys range, introduced in April 1934, were cast in solid lead. Later models were die-cast and so were cheaper and more authentic. Dinky managed to continue toy manufacture until 1941 producing, amongst other vehicles, light and medium tanks, an anti-aircraft gun and a light Dragon tractor complete with limber and 19 pounder gun. It also made ships and aircraft, including a model the Supermarine Spitfire. As well as Dinky toys, Woolworth’s sold a selection of military vehicles made from tinplate and still priced at sixpence, although in order to achieve this saving, their buyers had been forced to open a factory in Japan to manufacture tin-plate toys for import into America and the UK - a trade which ended abruptly on 7 December 1941. Model aircraft and ships were also popular, commercial examples usually being carved from a single piece of wood. Although FROG made the first models kits from moulded cellulose acetate in 1936, injection-moulded plastic kits did not become popular until after WWII, and before this period both flying and static models tended to be hand-made out of balsa wood from plans supplied by magazines such as Aeromodeller, which began publication in 1935.

Dinky toys in particular have an avid collector following these days and early examples fetch staggering prices, although some of these older vehicles suffer from a form of metal fatigue called zinc pest and care should be taken to look for signs of this on any prospective purchase.

Woolworth’s products are also popular but tend to be scarce, their flimsy construction meaning that they did not survive the rough handling they received at their original owner’s hands.

Meccano is a model construction system created by Frank Hornby in 1898. From 1914 until 1974, Meccano was produced in a purpose-built factory in Binns St, in Liverpool and from here Meccano also began producing clockwork trains under the Hornby tradename in 1920. These were Hornby’s main product until 1938, when its OO scale 12v electric trains were introduced under the name Hornby Dublo. Locomotives were diecast metal, with carriages and wagons generally made of tinplate and using Hornby’s third rail electrical system with the track built on a pressed, tinplate base. The range was expanded quickly in response to demand, but Hornby and Meccano production were both cut back from 1940, with production being completely suspended in 1942. Production of both lines resumed after the war but did not reach full capacity until 1948 due to labour shortages.

Both vintage Hornby trains and complete original Meccano sets are sought after by collectors, with prices dependent upon quality and completeness.

The clockwork Hornby sets tend to be more expensive than even the early electric trains.

Cap pistols and rifles, pop guns and water pistols were all popular during WWII, although American makers tended to dominate this market in Britain and these imported toys soon gave place to more important war materials. As well as the guns their fathers were using, uniforms were also very popular with boys, although apart from a US infantry helmet sold by Woolworths, in the UK uniforms seem to have been homemade for the most part.

Cap guns do not seem particularly good survivors, probably because of the corrosive nature of the ammunition used in them although they have a huge collector following.

Cap guns: Difficult and largely dependent upon maker, condition and presence of box - £20-£250

Toys for girls were not so closely influenced by the two world wars as those of their male counterparts. Tea sets, dolls and stuffed toys still dominated this market, although nurses uniforms were also popular. A number of teddy bear firms were also involved in war production and although soft toy makers tried to continue making their products during WWII, a lack of materials meant that even teddy bears had to get slimmer. Consequently, the general shape of teddy bears and other soft toys began to change with limbs and muzzles becoming shorter and necks lacking joints, so these may be useful characteristics for identifying later wartime toys. Another popular toy amongst little girls were cutout paper dolls and these are still readily available as templates on the Internet.

Children's uniforms are not very often seen at auction and when they do appear, they are usually the province of the specialist clothes collector rather than those interested in antique toys.

Teddy bears and dolls have a considerable following amongst collectors and this is another area where prices can become astronomical to the point of silliness.

Board and card games also followed a wartime theme during both conflicts, with board games like Kill Kiel, Battleships and Snakes and Ladders becoming popular in WWI. Card games such as Snap and Happy Families were also produced with a wartime theme, soldiers, sailors and airmen such as Jack the sailor’s son taking the place of the more usual figures like Mrs Bunn.

Similar games found favour in WWII, and one popular board game, Monopoly, had quite an interesting wartime history. Patented by Charles Darrow in 1935 as the well-known property trading game, in 1941, the British Secret Intelligence Service had John Waddington Ltd, the licensed manufacturer of the game in Britain, create a special edition for POW camps. Maps, compasses, real German money and other objects useful for escaping prisoners were hidden inside these games, which were distributed to Allied POWs by fake charity groups created and run by the British secret service.

Board games also have huge collector interest, the rules about value being simply: Old, obscure games in good condition fetch most. An exception to this is Monopoly, so many versions of this having been made that even wartime editions are quite common, although clearly the specialist POW version would probably be an exception.

Pricing is difficult and the best advice is: look around and pay what a game is worth to you as a player. These are particularly difficult to assess as an investment unless the buyer is very experienced.

Vintage board games and other toy related memorabilia