Fate of the Figureheads 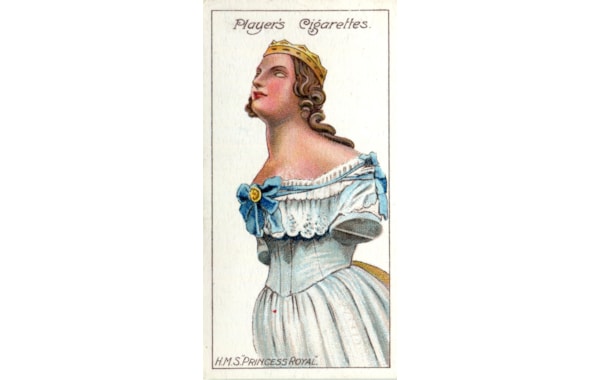 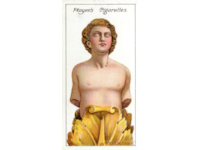 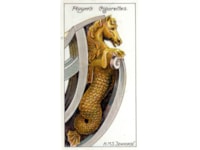 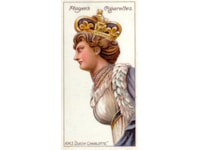 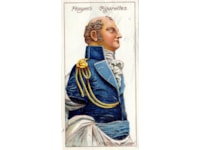 Richard Hunter discusses what happened to the Figureheads featured in the November 2018 issue of The Armourer.

The 1912 set of Figurehead cards shown in the November 2018 issue of The Armourer, was followed by a second set published by the same company in 1931.

This time it had larger sized cards and focused on Figureheads while still on the bow, with reference taken from surviving models. Of the two sets, the 1912 has a greater interest as the vast majority of the figureheads illustrated could still be seen within the United Kingdom, on public display. Unfortunately by the end WWII many had been lost, with a few rare exceptions.

1. HMS PRINCESS ROYAL. The Figurehead illustrated on this card was from a much later vessel, built in 1853, as a 91gun second rate. The Figurehead was destroyed in the Blitz of 1941.

2. HMS QUEEN CHARLOTTE.  Built in 1810 as a first rate ship on the line, this figurehead survives at HMS EXCELLENT the British Naval Command Headquarters, on Whale Island, Portsmouth.

3. HMS COLOSSUS. The reference for this illustration must have been taken from a surviving model, as a subject bears a remarkable resemblance to card 11, HMS Leader.

4. HMS SEAHORSE. Another Figurehead taken from a model.

5. HMS ROYAL WILLIAM. This vast Figurehead was in fact taken from HMS Royal Frederick of 1860, originally ordered in 1833 as HMS Royal Sovereign, work was not completed until 1860, by which time the name had changed to Royal William. For many years this Figurehead was still in the entrance to the original Portsmouth Dockyard Museum, together with that of HMS Royal Sovereign, card number 22. Both Figureheads moved to the Store establishment HMS St Vincent in Gosport last seen in the 1940s, believed to have to destroyed in 1957.

6. HMS BELLEROPHON. As seen in the illustration, only the head and neck of this 1786 Figurehead has survived. It is now in the Museum of the Royal Navy in Portsmouth’s Historic Dockyard.

7. HMS ROYAL ALBERT. For many years this vast figurehead of Prince Albert stood in the grounds of the Admiralty buildings in Portsmouth Dockyard. It was last recorded in the early 1920s with photographs of its original location in the 1930s show no evidence of the carving.

8. HMS ST VINCENT. Originally built in 1815 as a first rate ship of the line, this illustration may show the Figurehead while still on the bow. Used as a naval training ship from 1862 onwards until she was broken up in 1906, it is believed that the original Figurehead used as reference was lost in 1946. A concrete replica can be found at HMS Collingwood, Hampshire, and a second wooden replica was last seen in the USA in private hands.

9. HMS DUKE OF WELLINGTON. By any standards this figurehead was of a monumental size. Built in 1852, she was broken up by Castles ship breaker of London, in 1904, the figurehead going to its Baltic Wharf site. By the early 1930s the fabric of the carving had deteriorated to such a degree that only the vast head could be saved. This was taken to the Head office building on Millbank and displayed inside, until the building was destroyed during World War II.

10. HMS SYBILLE. This beautiful figurehead from 1847 has survived and can be seen with other Naval Figureheads in Plymouth, she will become part of the new Museum complex in the city known as the Box. This will be the flagship building for the Mayflower 400 commemorations in spring of 2020.

11. HMS LEANDER. A fine looking figurehead for the 4th rate vessel of 1848, broken up by Castles in 1867 this figurehead was on display on the outside wall of the companies Head Office in London. He was the only intact Figurehead to survive the war and was moved to the gate of HMS Collingwood in Hampshire.

12. HMS EDINBURGH. This and card No. 13, HMS Formidable, also come from the original Castle Collection of Naval Figureheads removed by the company and placed on display at a number of its yards around the south coast. Fortunately both Figureheads were bought by the Mariners Museum in Newport News, Virginia, USA, and arrived at the museum before the onset of World War II .If this had not been the case both carvings would have been lost.

13. HMS FORMIDABLE. Now in the collection of the Mariners Museum at Newport News, Virginia, USA.

14. THE TERRA NOVA. Surprisingly the only merchant Figurehead in the set, taken from a famous vessel with associations to the 1910 Antarctic Expedition. For many years this Figurehead stood in the grounds of Roath Park, Cardiff, until given to the National Museum of Wales in Cardiff.

15. HALF MOON. Another Figurehead taken from a ships model.

16. HMS WARRIOR. A historic carving from an historic ship. When the Warrior was taken out of service and used as a depot ship, her figurehead was removed and taken to the Naval Dockyard in Portsmouth. For many years it stood just inside the main gate, before being moved to the Home Fleet Headquarters in Middlesex. By the early 1960 it was found to be beyond saving and was destroyed. For the restoration of the vessel a new Figurehead was carved by Jack Whitehead and Norman Gaches. This magnificent replica can be seen on the bows of the vessel, in Portsmouth.

17. HMS VICTORY. This is the only card Players got wrong. The story of the Sailor and Marine as supporters to the Shield and Crown on the Figurehead, has been proven to be incorrect.

18. HMS SHANNON. A fine looking bust Figurehead from the vessel of 1806. In 1844 she was presented to a member of the Broke family after the vessel was broken up in the Naval Dockyard at Chatham in 1859. This carving has survived and for many years could be seen in the Suffolk home of a Broke’s descendent. However it is now in private hands in the USA.

19. HMS MARLBOROUGH. This truly vast figurehead has survived, removed from the vessel as late as 1924. He was given to the shore establishment HMS VERNON in Portsmouth. Now closed the area is now a large residential and retail centre, re-named the Gunwharf. Marlborough stands looking out over the Portsmouth Harbour.

20. HMS AJAX. Another large and impressive figurehead, from the Ajax of 1809. Built as a 74 gun third rate vessel, broken up in 1865. For many years this Figurehead stood in the Royal Naval Barracks in Devonport, South Devon, until he was given to the newly established National Maritime Museum at Greenwich London in 1936. A very good move as a number of Figureheads left in the yard, where lost during World War II.

21. HMS GIBRALTAR. Another Figurehead removed by the ship breakers Castles in 1889, and displayed in its yard in London. Built in 1860 as a first rate ship with 101 guns, like most of the Castles figureheads he did not survived the war.

22. HMS ROYAL SOVEREIGN. A figurehead with a complicated history. Originally laid down as a 121 gun First Rate ship of the line in 1857 she was converted while still on the stocks to a Turret Ship, with no room on the bow for such a vast carving. She was placed in the entrance to the small Dockyard Museum in Portsmouth Naval Yard, together with her companion figurehead HMS Royal Frederick (card No. 5, incorrectly named HMS Royal William) in the 1930s. With the closure of the Museum, both Figureheads moved over to HMS St Vincent the newly formed Naval Training establishment in Gosport. The Royal Sovereign Figurehead was lost in around 1946 while the Royal Frederick lasted a few more years, until the late 1950s when he too was found to be beyond saving.

23. HMS EURYDICE. A Figurehead with a truly tragic history. Salvaged from the vessel of the 1843 she was used as a Naval Training ship and lost in 1878, with only two people surviving from a crew of 319. Salvaged from the wreck, her Figurehead acted as a memorial to the lost. First in the old Dockyard Museum, she can now be seen in the Museum of the Royal Navy in Portsmouth.

24. HMS CALCUTTA. For many years after the vessel was broken up in 1908, this figurehead stood in the grounds of Kilverstone Hall near Thetford Norfolk, the home of the First Sea Lord, Lord Fisher, and given to him on his retirement from the Admiralty, after a long restoration project, he was finally presented to the Museum of the Royal Navy in Portsmouth.

25. HMS BLACK PRINCE. Very much a companion figurehead to HMS Warrior (card No. 16) this impressive Figurehead was removed from the vessel in 1923 and placed within the old Dockyard Museum in Devonport. A number of photographs have survived showing him in a good condition inside the museum. However by the 1930s he had disappeared from the list of surviving Naval Figureheads in the United Kingdom and his fate is still a bit of a mystery .

Of the 25 cards in this set published in 1912, almost half still survive today, with two still held within Naval establishments numbers 2/11, seven are held in British and American museums numbers 6/10/12/13/14/20/24, with one still on private property within the United Kingdom number 19 and one in a private collection in the USA number 18, some 11 in all.

Richard Hunter is a Figurehead historian and has the world’s largest, private archive of Figurehead related material. Details of his work and archives can be found at www.figureheads.co.uk.

23 January 2020
Tweets by The Armourer Magazine