Food and drink for the forces The Navy, Army and Air force Institute, abbreviated to (NAAFI) was established by the British government in 1921, to make sure goods were supplied to members of the armed forces and their families at reasonable prices. However, the actual history of the NAAFI goes back much further in time than the 20th Century.

On the 6 January 1645 during the English Civil War parliament began the foundation of what was to become the British army. It was founded with Sir Thomas Fairfax as its commander and, on paper, consisted of 22,000 men, including 11 regiments of cavalry with 600 men in each, with a total of 6,600 men, 12 regiments of infantry with 1,200 men with a total of 14,400 men and one regiment of 1,000 dragoons. In reality the total was some 4,000 men down due to desertion. Logistically, this was a huge army and it was supplied by commissaries with bread and cheese only, so victuallers must have made a small fortune supplying everything else that the individual soldiers required. 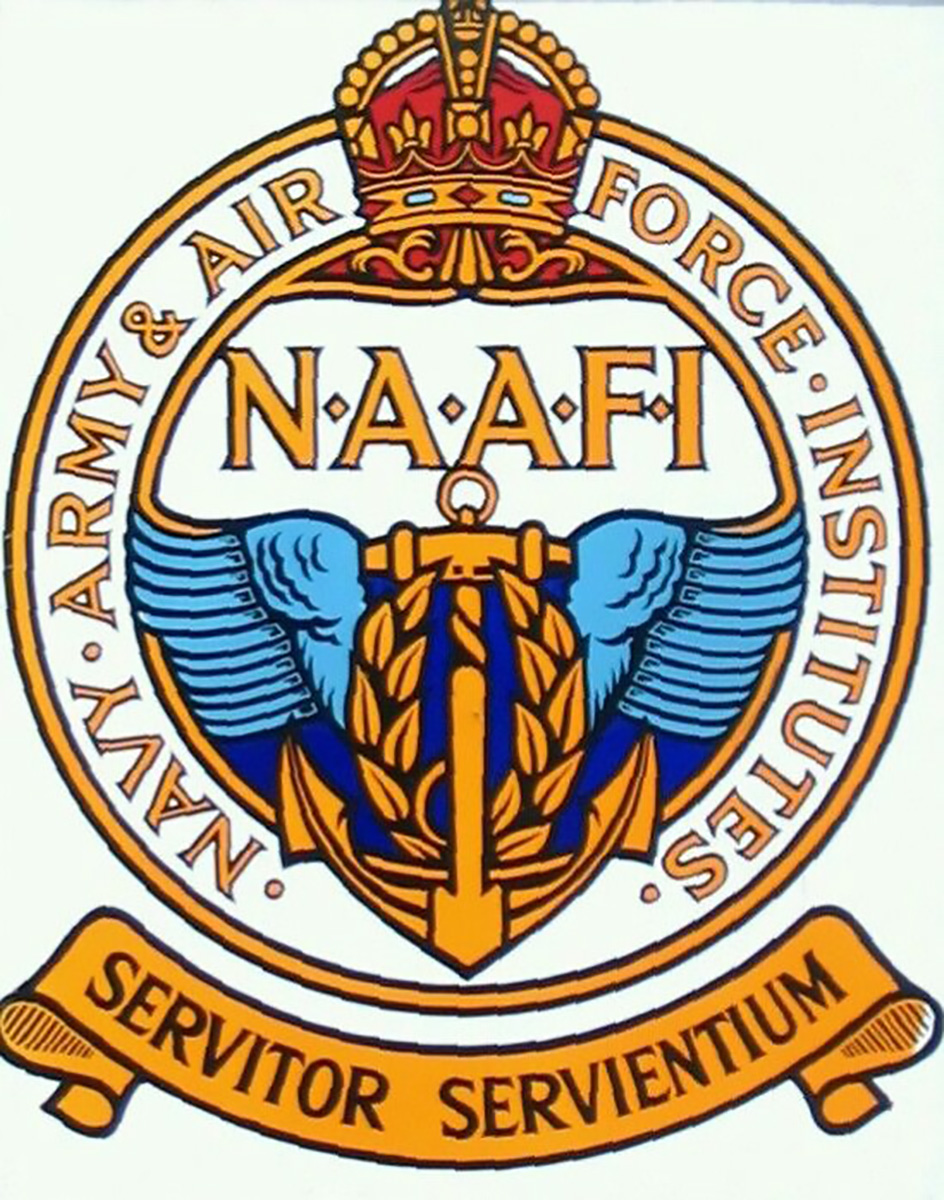 In 1689 John Churchill the Earl of Marlborough took charge of the British army in France, which consisted of some 8,000 men and began to remodel the army to how he wanted it to be, by purging the ranks and promoting officers that would be loyal to him. By 1702 bread was supplied by commissaries and licensed Sutlers (a Dutch word for someone who does dirty work) supplied everything else. However, these men were not popular and the very name Sutler does imply that these men were far from honest. Each regiment had a Grand Sutler and each company had its own licensed Lesser Sutler. Furthermore a staff officer with the rank of Major was meant to control the weight and measure of sold goods, but unfortunately it appears that the price was not controlled, so Marlborough’s remodelling was not for the benefit of the British soldier at all. In 1714 Britain acquired more territory in America and the administration back in England struggled to deal with the problem and consequently the average British soldiers or sailors’ lot was not improved greatly until the later part of Queen Victoria’s reign.

Under the old system a regiment belonged to its commander, normally with the rank of Colonel, while troops and companies were the property of their Captains. It was up to them to decide exactly what the men could be supplied with, which included the sale of alcohol to the soldiers in the regiment. This old and unfair system was finally abolished in 1871 and after that date a soldier’s lot slowly improved. 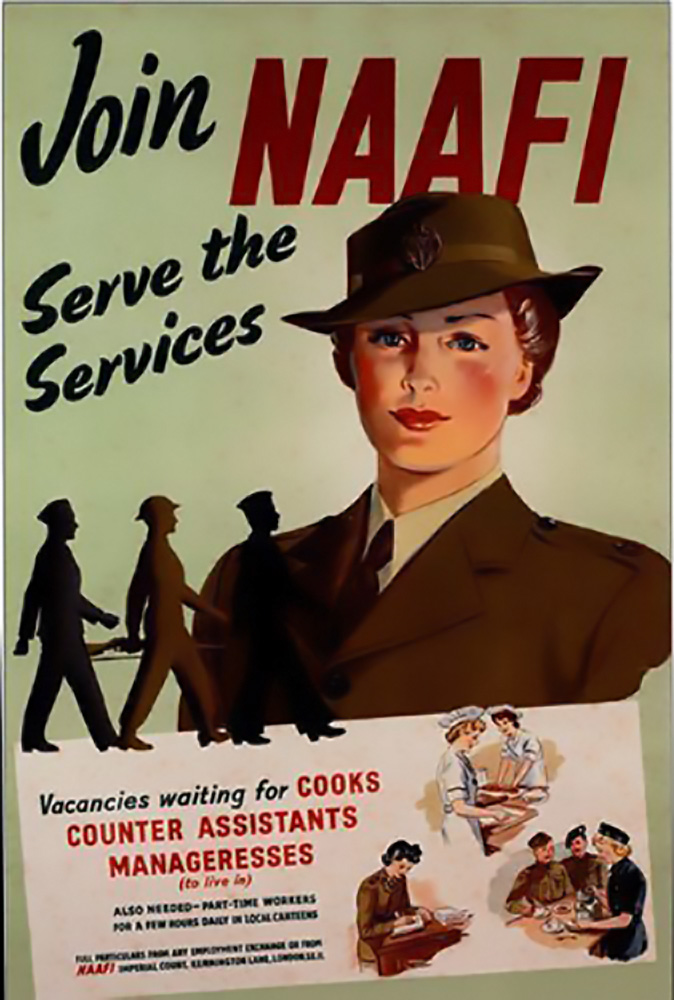 The Army & Navy Co-operative Society was formed by a group of serving British army officers in 1871, in order to supply its members with essential goods at lower prices than standard high street stores. The business continued to grow and stores were built all over the country. By 1900 there were three stores in India. However, events in Europe in 1914 affected the business in a negative way and sales dropped. Luckily the War Department contracted the Society to supply goods directly to the British armed forces and it managed to survive the crisis. By 1934 the Society became a limited company known as the Army and Navy Stores. Despite being hit hard again during WWII the business continued to grow and although it is now part of the House of Fraser it is still in business to this day.

In 1892 during the latter part of queen Victoria’s reign, a senior member of the armed forces, the (Captain) Honourable Lionel Henry Dudley Fortescue, canteen President of the 17th Lancers (born on 19 November 1857 at Castle Hill in Devon) became very concerned with corruption and dishonesty amongst the staff of the, then privately run, mess canteens and he established a system where the till remained locked until the canteen was opened for business in order to prevent theft. An able and honest member of his staff, Sergeant John Gardner, was put in charge of the canteen and he continued to handle the funds after Fortescue was killed in action on 11 June 1900 at Diamond Hill in the Boer War, right through WWI.

In 1894 the Canteen and Mess Co-operative Society was founded by the Hon. Lionel Fortescue and Major Harry Crauford of the Grenadier Guards. This improved the situation somewhat as the Society purchased goods directly and sold them on to regimental canteens. 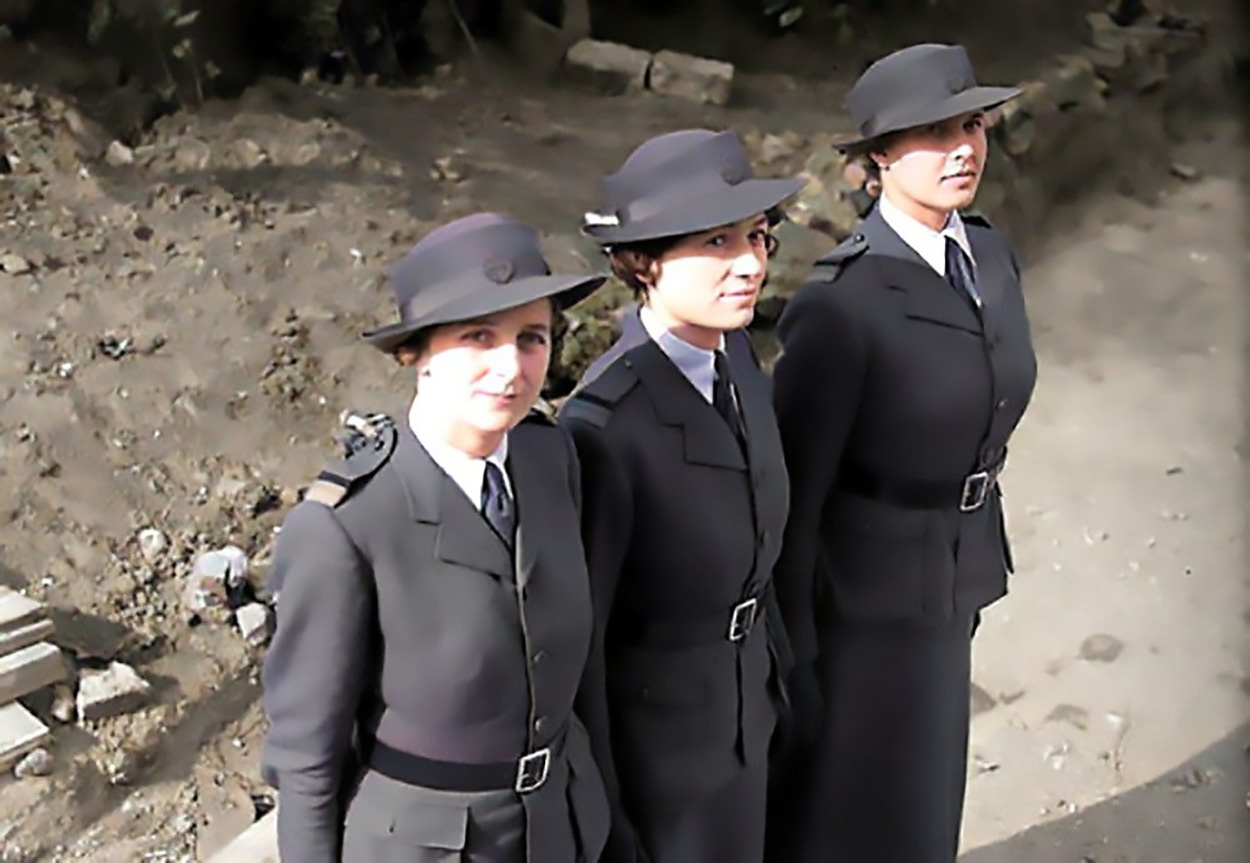 The Great War demands
When WWI broke out in 1914 and the BEF was sent to France, the War Office struggled to supply goods to the troops, dishonesty became a problem again. So, early in 1915 a board of control was established to keep things honest. In January 1917 the founder of the Canteen and Mess Co-operative Society, along with the largest canteen contracted company Richard Dickenson & Co, united to form the Army Canteen Committee and it was registered with the Board of Trade as a non-profit making company.

In June 1917 the Royal Navy also became part of the Army Canteen Committee and the name was changed to the Navy and Army Canteen Board. By 1918 the newly established RAF canteens were also absorbed.

In early 1920 Winston Churchill set up a committee to decide what should be done with the profits that were made between 1914 and 1918 - the unanimous decision was to establish one organisation to supply all three branches of service, during peace time and during conflict. Thus, on the 6 Dec 1920, the Navy, Army and Air force Institute (NAAFI) was established and it started trading in 1921.

A branch of the NAAFI was opened in St James Kavlier, Valletta, Malta in 1921 which annoyed local traders at the time. However, during WWII, providing supplies reached the island it must of been a lifeline for the military personnel and civilians alike. By 1928 troops stationed overseas could buy exactly the same items sold in NAAFI stores at home. 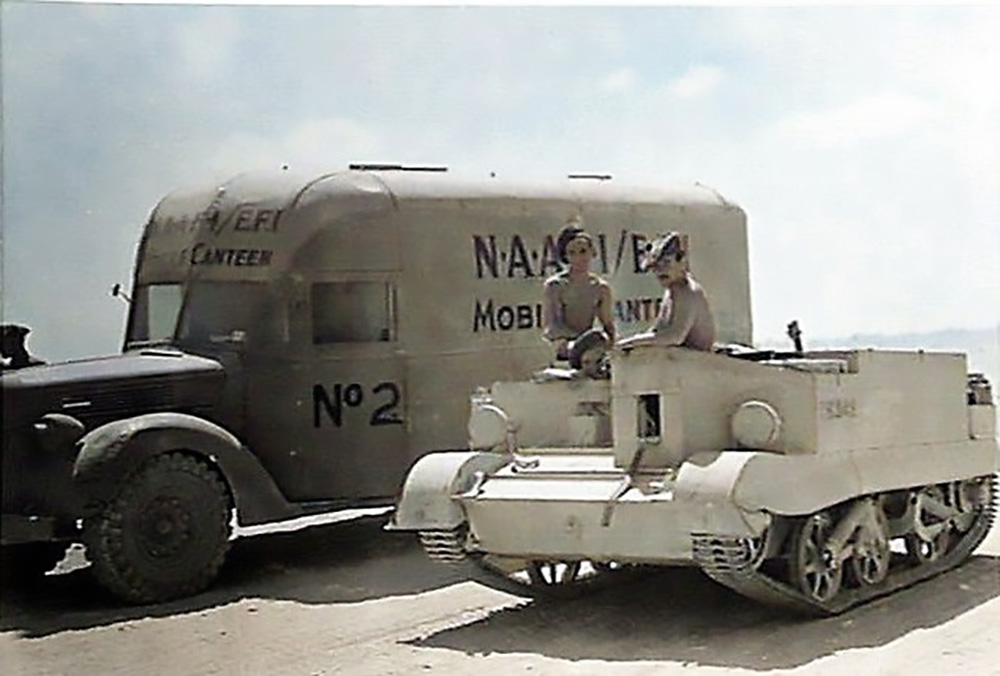 perial Court at Kennington Cross was built in 1836 in order to house the Licensed Victuallers School, but upon the foundation of the NAAFI it became the headquarters of the organisation up until 1992.

The NAAFI made a very notable contribution towards keeping the morale of the troops up during World War II. During the war years the Chief Executive Officer and Chairman was Sir Lancelot Royle. Before the war started in 1939 the organisation had fewer than 600 canteens and 4,000 personnel. However, by 1940, during the Battle for France, the organisation had nearly 3,000 personnel and 230 canteens just to supply the BEF in France with food, drink, cigarettes, combs and other essential items. 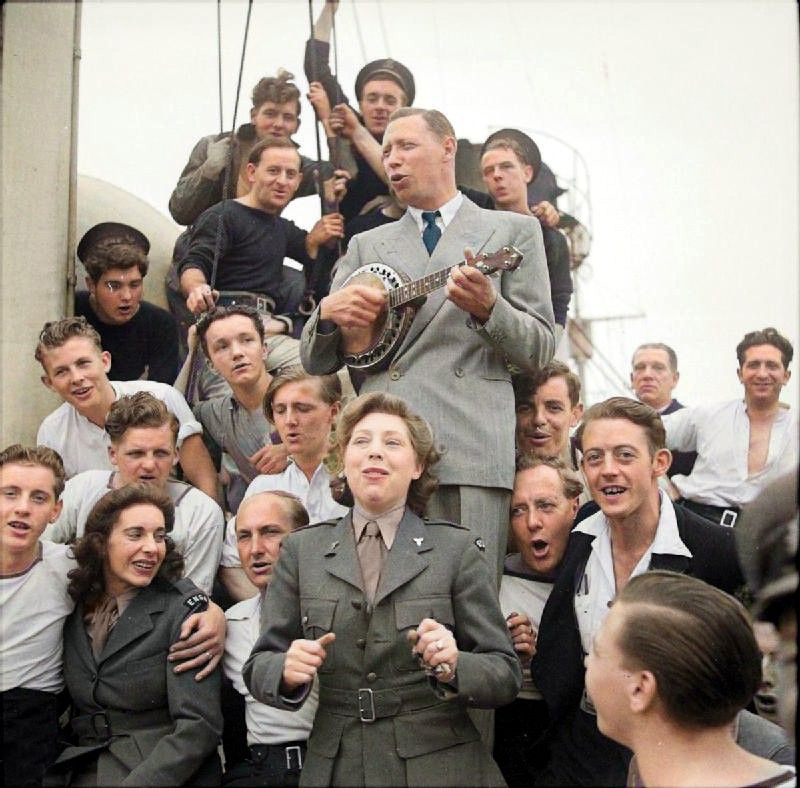 By April 1944 the NAAFI maintained 7,000 canteens and had 96,000 personnel. The organisation also controlled ENSA, the forces entertainment organisation. During the build up to D-Day in 1944 the NAAFI sent mobile canteens to the army camps on a daily basis. Obviously this was very low key at the time as the planned invasion had to be kept secret.

The Entertainments National Service Association (ENSA) was an organisation set up in 1939 by Basil Dean and Leslie Henson in order to boost morale and provide entertainment for British armed forces personnel during World War II.

The first big wartime variety concert organised by ENSA was broadcast by the BBC to the Empire and local networks on 17 October 1939 at from RAF Hendon in North London, where Adelaide Hall sang, ‘We're going to hang out the washing on the Siegfried Line’. This was an very popular song during the Phony War period, before the German Blitzkrieg attack in 1940. Many wartime entertainers performed for ENSA at home and overseas during the war years and post-war. 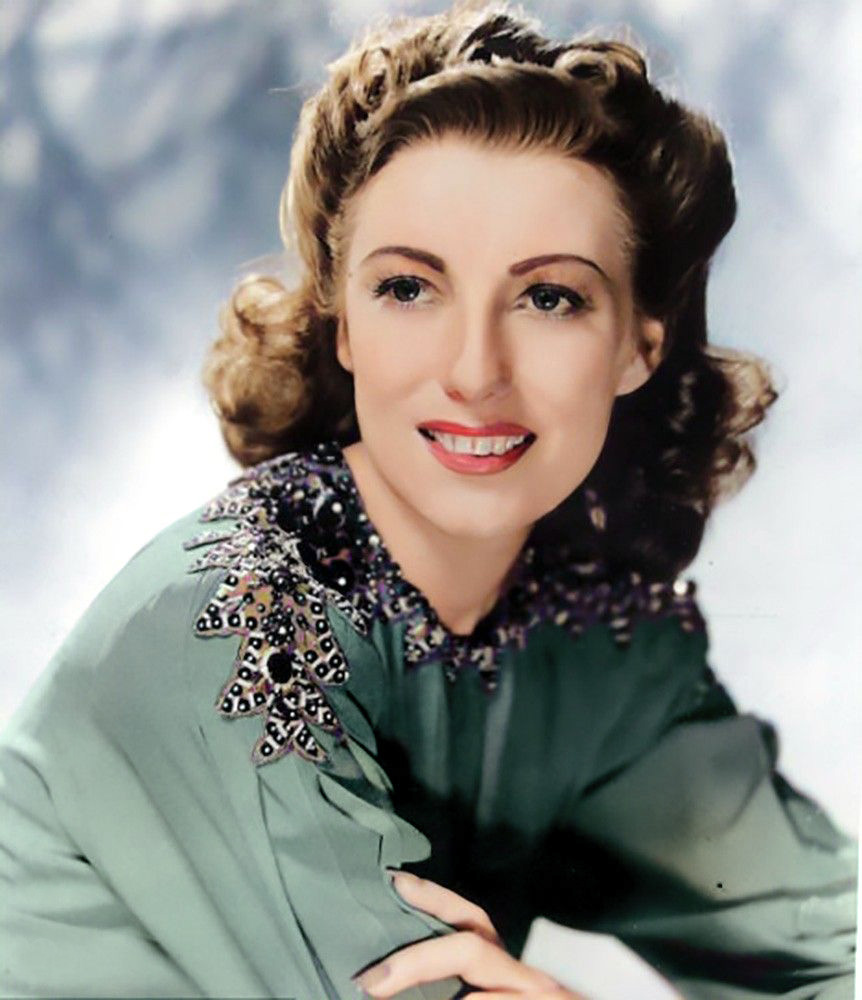 Dame Vera Lynn ‘the Forces sweetheart’ performed live at many ENSA concerts for the troops on leave at home and overseas in Egypt, India and Burma, her songs are still popular to this day. Other popular entertainers included Flanagan & Allan, Gracie fields and George Formby.

During the post-war years the NAAFI continued to grow and serve the armed forces wherever they were stationed, be it on land or sea. During the Falklands war, on 21 May 1982, the Argentinean Air Force attacked HMS Ardent and, after the last member of the gun crew was killed, NAAFI ships canteen manager John Leeke, who was an ex-soldier, went up on deck and manned one of the anti-aircraft guns. He was awarded the Distinguished Service Medal for his brave action on that day.

In 2010 NAAFI tea went on sale to the general public - prior to that date it was exclusively sold to members of the armed forces.

However, the NAAFI’s days are now numbered, as the Army is being reorganised. The organisation is, according to NAAFI chief executive Reg Curtis, “No longer cost effective.” So, after nearly 100 years of service, all the shops, clubs and recreation centres will be closing down for good. This will reportedly save £2m pounds. 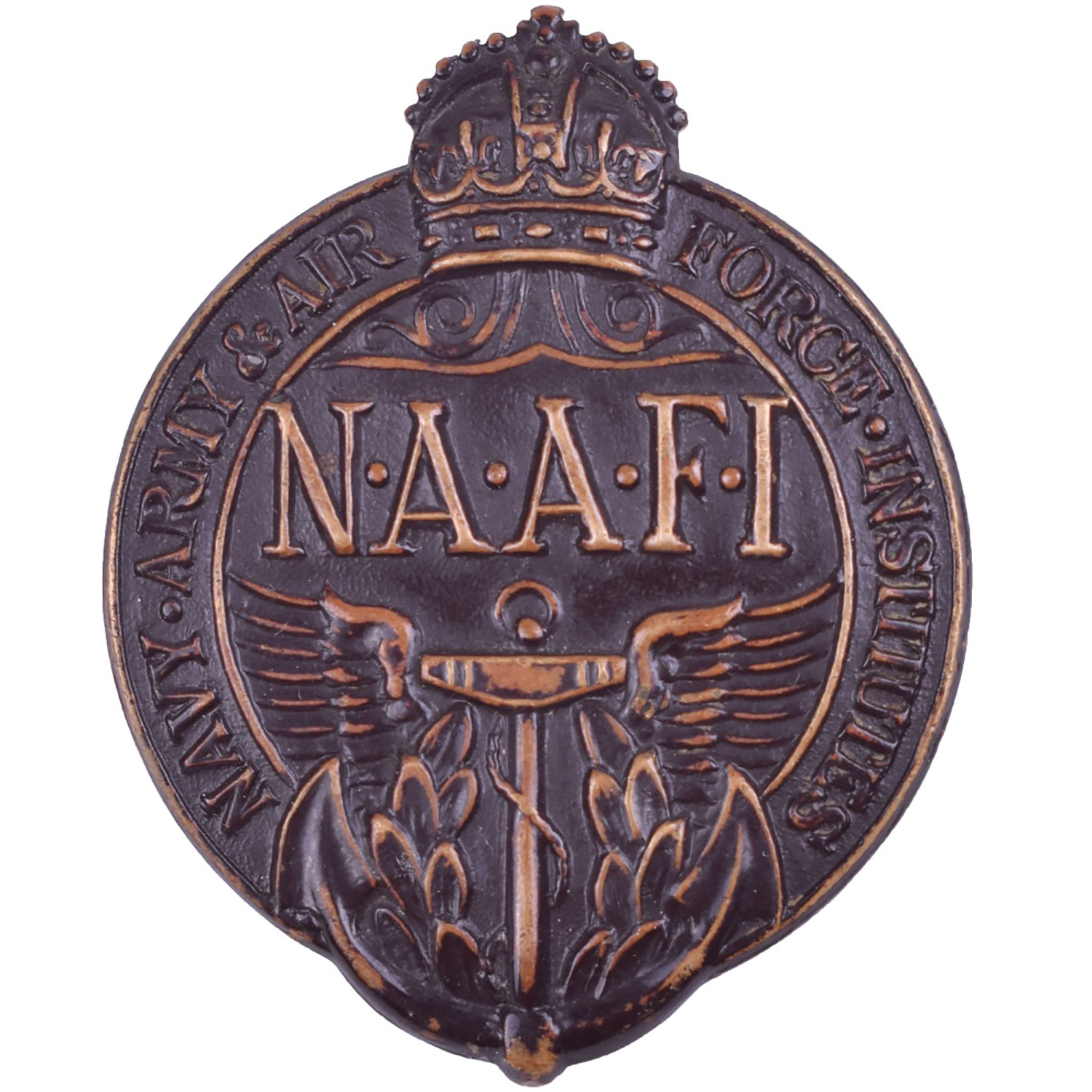 Collecting NAAFI Items
It is not easy to find many NAAFI items from WWII for sale and it would take dedication to build a large collection of items from that period. However, many post-war items and some wartime items can be found on eBay. Also some militaria dealers do get interesting NAAFI items. The canteen-issued tokens are probably the most common items to find for sale and these can be found manufactured in plastic, brass and other materials. It is also a very good idea to check auction houses for NAAFI items. Currently prices start from just £2 so it can be an affordable area to get started in.

For new collectors it’s advisable to start on the Militaria Mart website and go through the dealer lists. Whilst this might take some time to undertake, it is worth checking the various site links on the page for NAAFI items. Some Numismatics sites get NAAFI tokens from time to time and it can also be worth carrying out a search on the net. Scarce NAAFI enamel building signs sometimes turn up for sale and prices start from £80, up to nearly £400.  These are the place to look online: War Department Militaria, Home Front Collection, Sentimental Journey, JC Militaria and eBay.co.uk.