Jamie Cross looks at the medals awarded by Hitler for the annexation and occupation of neighbouring countries.

Hitler had bluffed his way into the Rhineland, re-united Germany with the Saar, and now, he turned his gaze to other areas where ethnic Germans lived. The largest of these was Austria, and it was to here that Hitler's next gamble took place in 1938. Hitler knew France would do nothing, as before in the Rhineland. England was trying to appease Germany and now Italy was on his side. Also there had been strong support from people of all backgrounds, in both Austria and Germany, for a union of the two countries, for a number of years.

This was aided by the National Socialist, Heim ins Reich movement to bring ethnic Germans outside of Germany into the Greater German Reich and Austria, with its large ethnic German population, was the next target. Hitler’s troops crossed the border of Austria with much cheering as bands played, people sang and women threw flowers. This was the first of the so-called flower wars, where not a shot was fired, and the first medal in a series of three. 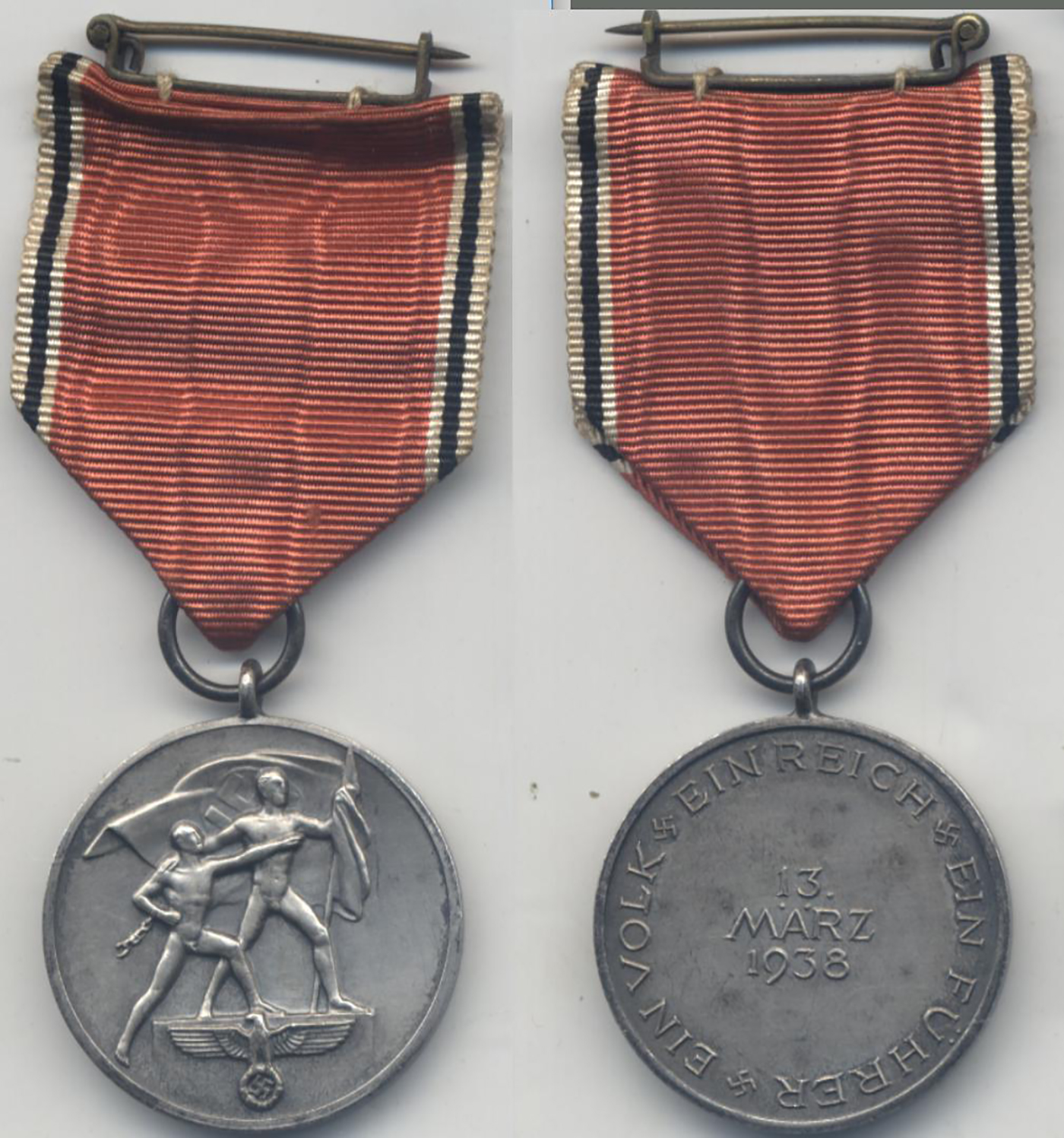 The design of all three of these medals is the same, except the colours, which includes the ribbon colours as well as the layouts, this will be expanded later on in the article.

At least two designs were considered for this award. The first was designed, manufactured, but never approved or adopted. This rare prototype has, as its main design, Adolf Hitler’s head and the wording, ‘Ein Reich, Ein Volk, Ein Fuhrer’ around the edge of the award. The design was made by Richard Klein and was based on the election day badge from 1933. It is stated that the award was to be bronze and had, to the reverse, the date ‘13th March 1938’, with a German eagle and swastika. Apparently some were issued, but the Fuhrer rejected the design, going instead with Professor Klein’s second design, which was also to be used on the rally badge for the Reichspartag of 1938.

This shows a German on a podium with a flag, being joined by another ethnic German who has broken his bonds of slavery and is joining his German brother. The reverse of the medal has the slogan ‘Ein Volk, Ein Reich, Ein Fuhrer’ and the date ‘13 Marz 1938’ to the centre. The award hangs from a thin, white, black, white, then thick red centre coloured ribbon with again, white, black and white edge strips. The round medal comes in a nice hard red case, with a gold blocked eagle and swastika to the lid. This is opened by a push stud and has a white silk top liner and a red base compartment to accommodate the ribbon and medal.

The award was bestowed on all persons, both military and civilians who had helped in the unification of Austria with Germany. Over 315,000 awards were given, with the last being made on 31 December 1940. When presented, an award document has the name and sometimes the man’s unit entered onto it. The award was manufactured from a silver-plated heavy brass alloy, though sometimes a bronze one may be found. It was to be worn on the left breast, behind any military decorations and could be worn on a ribbon bar, if so wished. 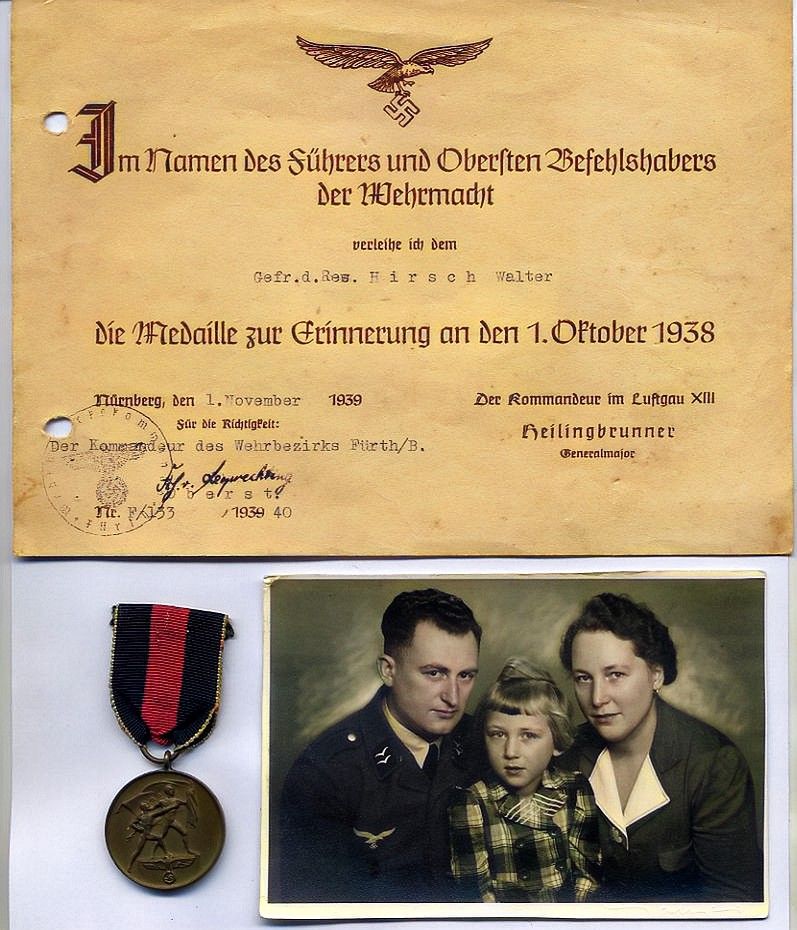 The next in line is the former Austrian territory of the Sudentenland. This award as previously mentioned, is the same obverse design as the Austrian award, with a few design tweaks. The first was the date, ‘1 Oktober 1938’. The second is the award in bronze. Finally, the ribbon colour was changed to a thin white edge, a wider black red and black strip and then a thin white edge. Infamously, this award was the result of Chamberlain’s, “… piece of paper” and “… peace in our time” talks with Hitler. With British acquiescence, Germany marched into the Sudentenland and the troops were again showered with flowers as German marching bands plaid music etc. This medal was also designed by Richard Klein and close to 1,170,000 awards were issued.

This bar was instituted on 1st May 1939 as a reward to those people who had helped in the creation of the German protectorate of Bohemia and Moravia. It was to be given to those who had already qualified for the Sudentenland medal, and had continued to stay in Czechoslovakia. The remaining troops occupied Bohemia and Moravia five months later. The final act was that Slovakia was made a German satellite state a day later, ending the independence of Czechoslovakia.

The clasp, or bar, is bronze in colour and shows the design of a Prague castle overlooking the rest of Prague. The bar was affixed to the ribbon of the Sudentenland award, about half way up, with two wide prongs.  The total number awarded was approximately 135,000. Awarding ceased on 31 December 1940. The award came in a paper packet or card box. More often than not, it was attached to the ribbon of the 1 October medal and came with that in a brown, hard two-piece case of award. Both the Sudentenland and Prague Castle bar were awarded with a presentation document 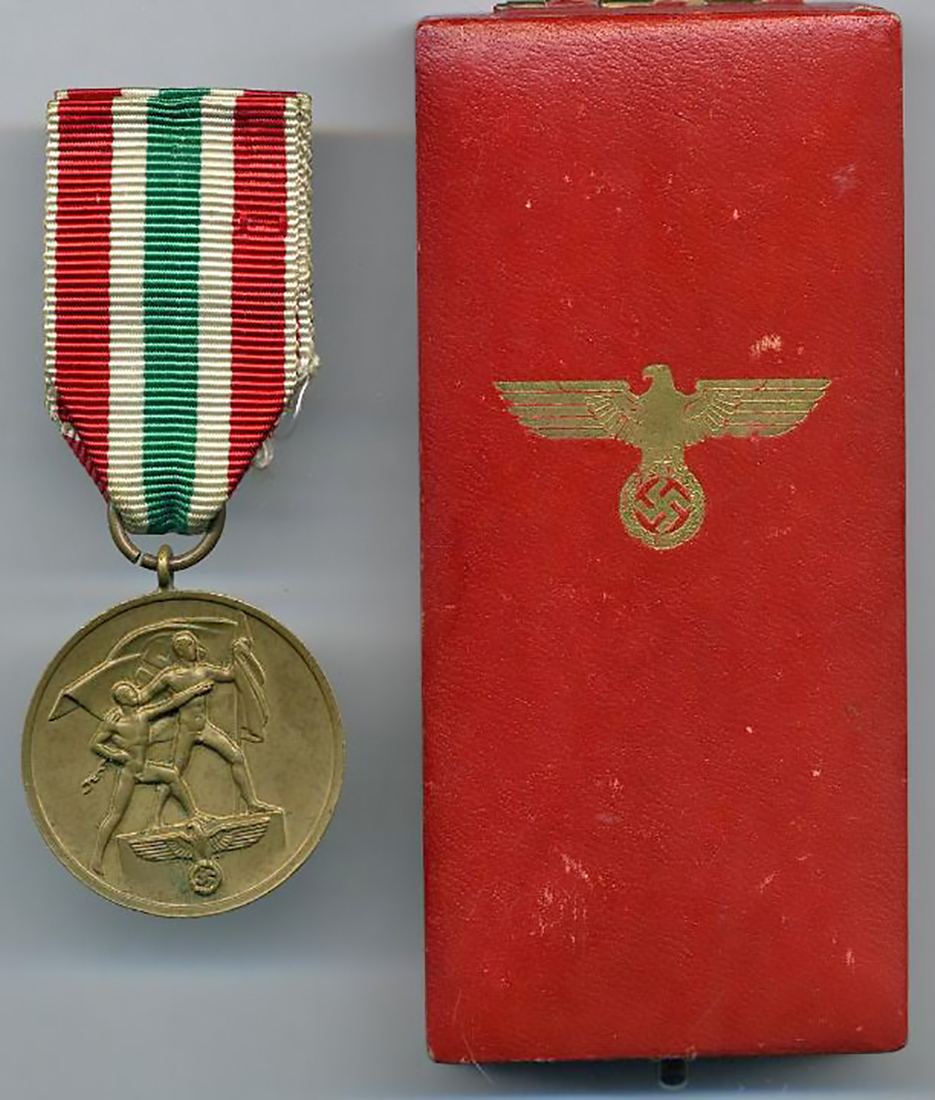 Historically, this award is memorable for a number of reasons. Firstly, the medal ribbon for this award is for the colours of Lithuania, red, white and green. The award, although it follows the same obverse with the design of the 1938 Reichspartag badge as used by Klien, has the inscription ‘Zur Erinnerung an die Heimkehr des Memellandes 22. Marz 1939’ on the reverse. In English this translates as, To commemorate the return of the Memel District 22. March 1939.  This replaced the proceeding wording of ‘Ein Reich, Ein Volk Ein Furhur’ with either dates of ‘13. Marz 1938’ or ‘1. Oktober 1938’ to the centre.

Adolf Hitler made the demand to Lithuania on t20 of March 1939 and, unaided by the League of Nations, Lithuania  had no real choice but to give in and handed back the area of Memel to Germany. Two days later saw German troops arriving by boat to another flower war welcome, as Memelland came home to the Reich.

The medal comes in two main types and this has caused a lot of concern for collectors with one type being condemned, by some, as a fake. This classification is due to the A on the Marz date with some being higher than others, eg a small ‘A’ and a large ‘A’. For years, some collectors believed that the larger ‘A’ types were fake, and many are, but so too are many of the smaller ‘A’ types, so unfortunately this cannot be used to authenticate an award. Contemporary catalogue pages clearly show both types of ‘A’ on original awards. 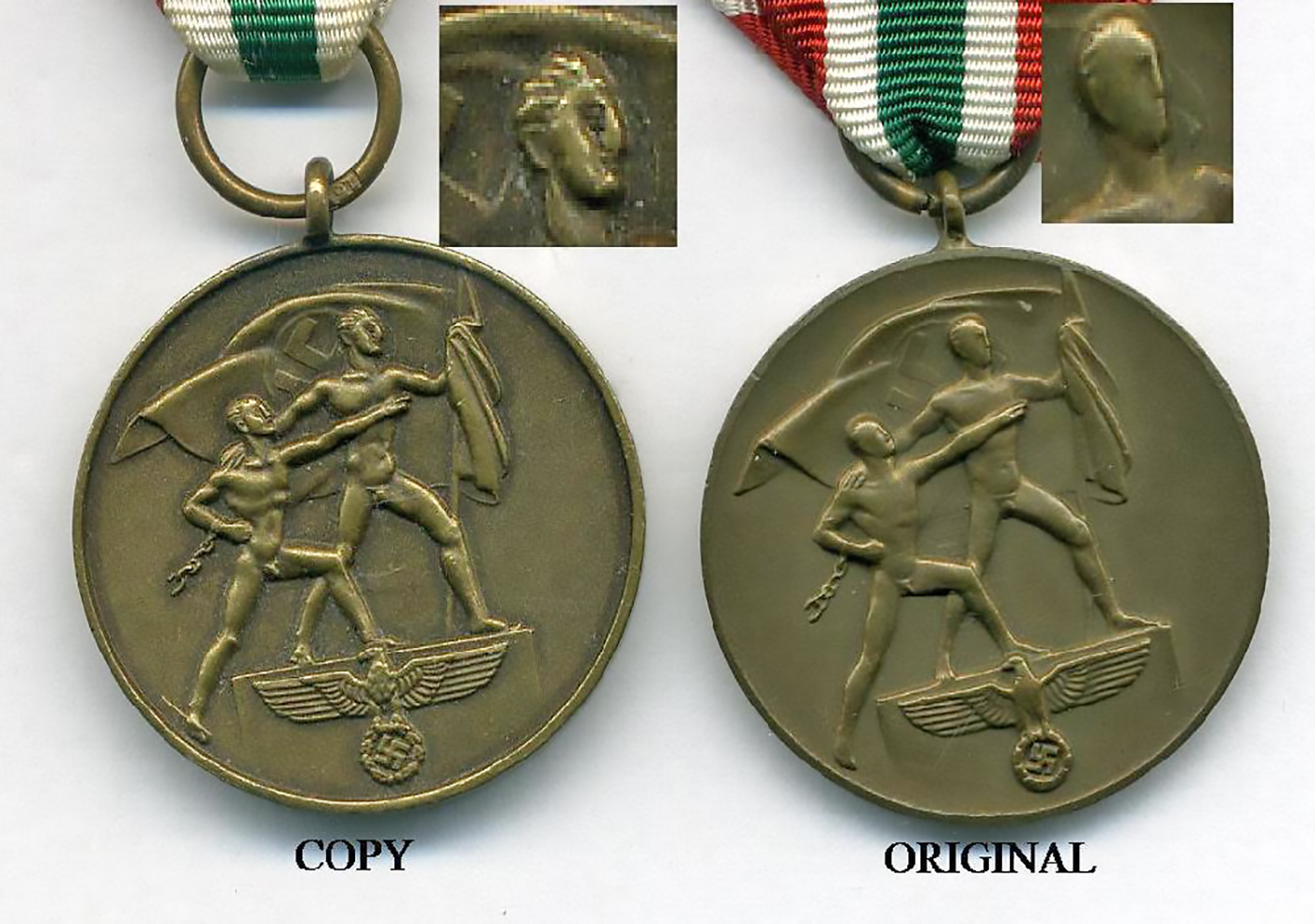 One clear type of copy though can be identified, and this is the type with the mask on the two men to the front of the award. This award is made and sold as a copy in England, but due to the scarcity of the award, with less than 32,000 issued, many of these copies have been passed off as originals. This type of front also identifies copies of both the Sudentenland and Austria medals. Other copies show clear cast lines around the edge and these should also be avoided.

The medal when worn was often issued in a red, hard two-piece case, with the award and ribbon segmented in the base with the ribbon having a pin attached. To the lid of the case is a gold blocked eagle holding a swastika, So far, through the cases, paper packets and catalogues encountered, I have identified the following makers: No. 1, Deschler & Sohne; No. 4 Steinhauer & Luck; No. 30, Hauptmunzamt Wein & Otto Schinckle. There are undoubtedly more, but these are ones I have seen to date.

When awarded, a citation was given and a notation was made in both the Soldbuch and Wehrpass.

The history of the Memel district follows other German territories being transfered to other countries after her defeat in WWI. Memel, which was originally a part of East Prussia and still having a large German ethnic population with over 55% being counted as German, was ceded to Lithuania following the Memel convention of 1924.  During the preceding years to 1939,  some of these ethnic Germans, like many others in other lands, formed their own political party and shown here is a rare example of the civil lapel badge for the Memel-German Culture Union, a pro-German group that used to spread propaganda among the Volksdeutsche of Memel and its surrounding district.

These ethnic German party badges rarely turn up nowadays because, as with most of these places, they were overrun by the USSR and the remaining German populous were deported and sent to labour camps. Holding on to a pro-German badge would not have been a good idea in such chaotic times, making such items rare in collector terms, today.

Here is what you can expect to pay for this range of flower war medals.