Look, Duck and Vanish on the Home Front As the German army poured into the Low Countries in May 1940, the military authorities in Britain began discussing the formation of a force of volunteers for local defence against parachute and glider-borne attacks, such as those that had captured the Belgian border forts at Eben Emael. It was quickly agreed that a wireless broadcast by General Sir Walter Kirke, Commander-in-Chief of the Home Forces would announce the formation of this force which, on 12 May, was named the Local Defence Volunteers. 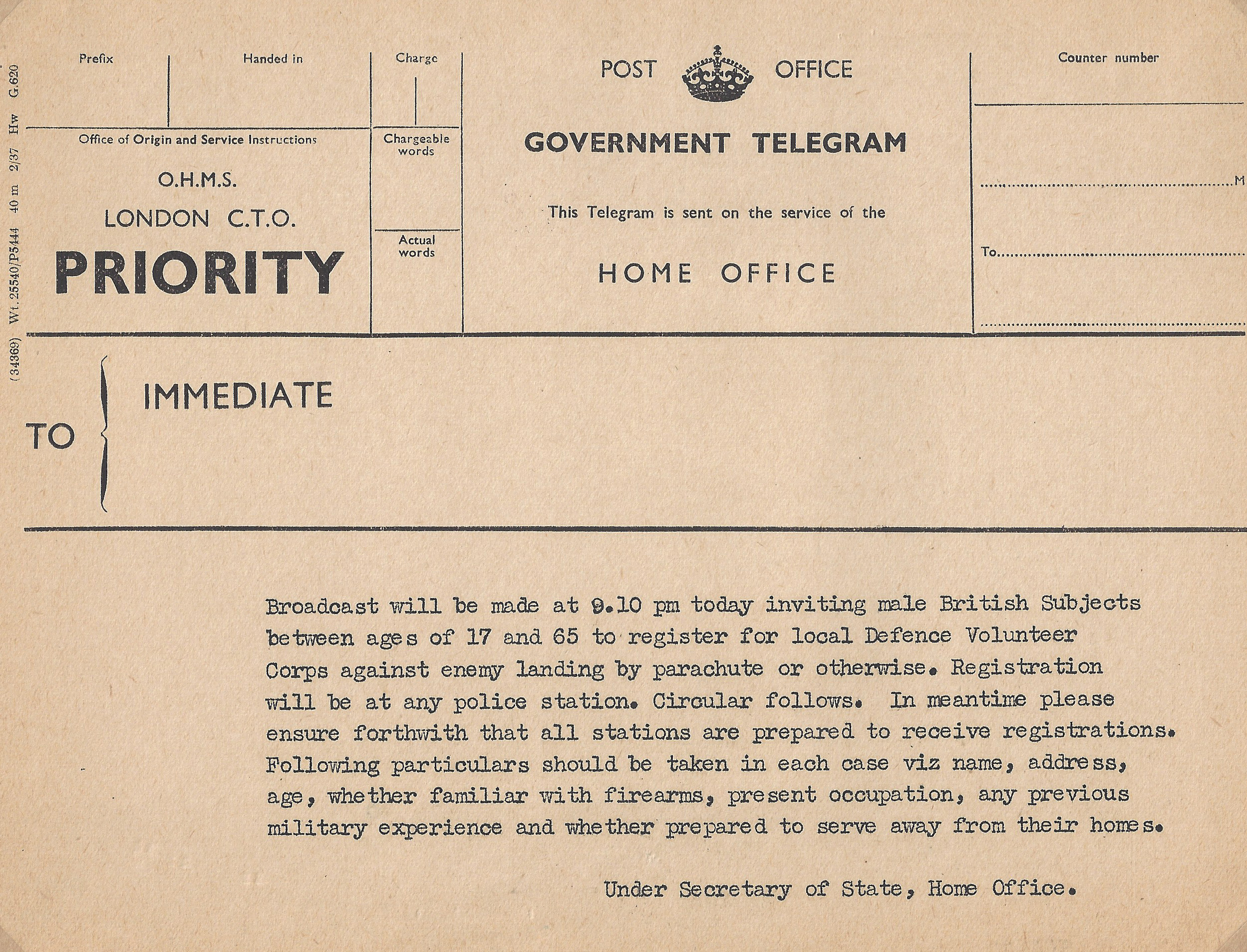 Right: The Home Office telegram which alerted the Police to Mr Eden’s broadcast asking for volunteers for the LDV

As Winston Churchill had been calling for the establishment of a defence force of men over 40 since October 1939, he arrived in Downing Street as Britain’s new Prime Minister, on 10 May, eager to see it formed. Four days later his new War Minister, Anthony Eden made a radio appeal which would launch one of the largest civilian volunteer forces in British history. Those willing to serve in it – who had to be between 17 and 65 and capable of free movement were asked to register at their local Police station which, although warned by telegram that an appeal would be broadcast, were soon overwhelmed by the response, some volunteers arriving before Mr Eden finished speaking. As the Police took down names and addresses, discussions began as to how this new force would be dressed, identified and equipped, the full details of its formation and purpose announced in the House of Common on 22 May by Sir Edward Grigg, Joint Under Secretary of State for War.

The Local Defence Volunteers said Sir Edward were being formed to reinforce the Army’s home defence battalions, freeing soldiers from local defence tasks by patrolling and protecting vulnerable spots. Their second function, described by the already popular name nickname parashootists or parashots, was to deal with enemy parties landing from the air, events in other countries having demonstrated the importance of organising immediate local action against them. The LDV was to observe and provide early information on enemy landings, help prevent their movement by blocking roads, denying access to transport and hemming them in as soon as they landed. Their role in observing and reporting the arrival of enemy troops quickly saw the letters on the volunteers’ armbands interpreted as Look, Duck and Vanish. 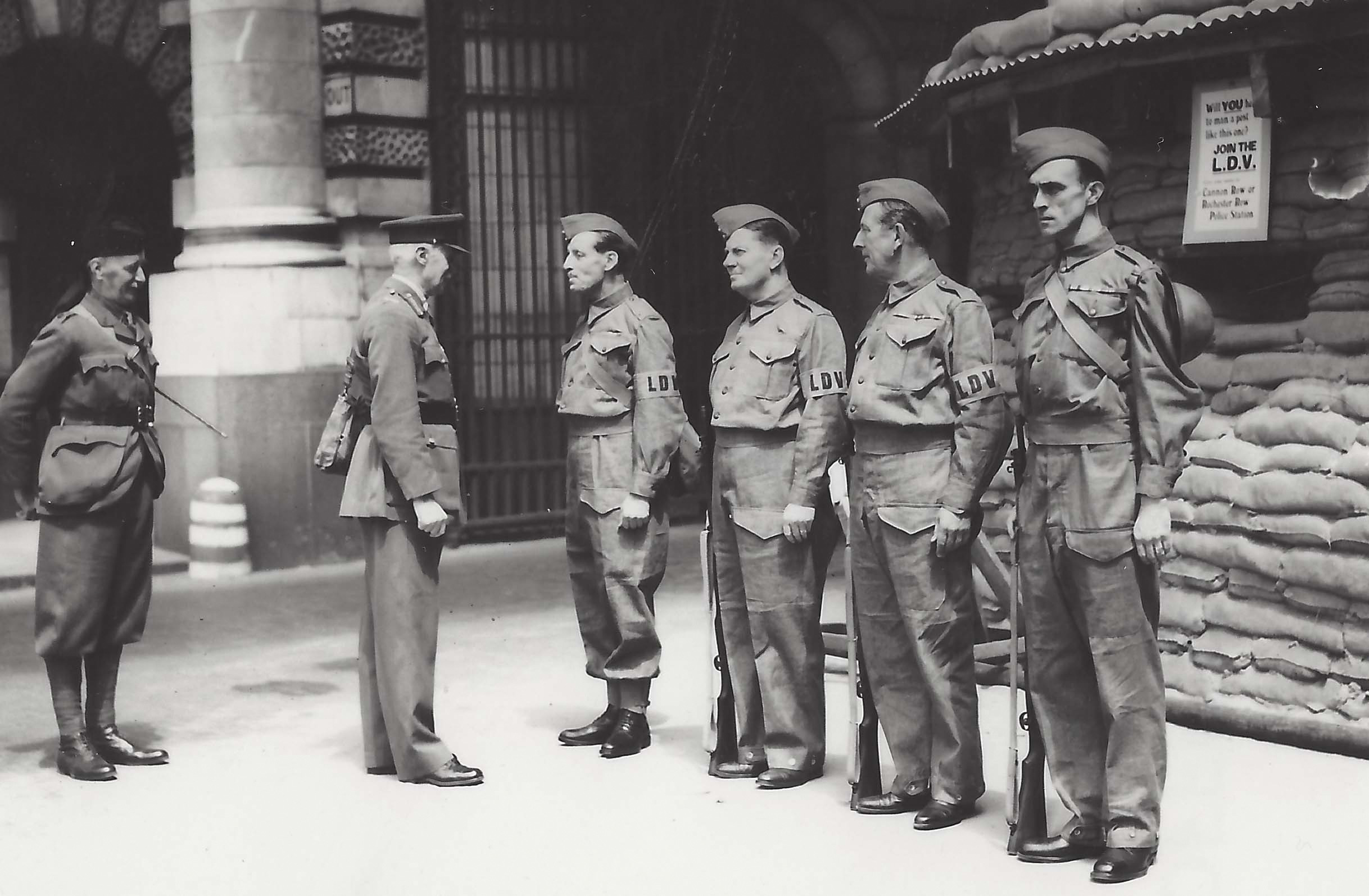 Essential for cooperation with the Army if invasion came, the LDV’s operational structure was based on Britain’s military Areas each being sub-divided into Zones which covered a county, then divided into Groups with local battalions structured as infantry. As the only organised body on which they could be based, the layout of Zones and Groups often followed police force boundaries. London LDV’s S Zone, for example, covering the same north London area as S Division of the Metropolitan Police.

Whilst the number of volunteers was impressive, between 300,000 and 400,000 by the end of May, they had few weapons, their absence noticeable in most LDV photos. A small number of .303 Lee Enfield service rifles were made available, a Welsh unit reported having six for 400 men. Despite orders placed for World War I vintage rifles from Canada and the United States, the majority of the LDV were armed, like Exeter LDV’s early patrols, with shotguns, a weird variety of revolvers, and last but not least a good hefty stick. Although supplies of weapons improved, as late as August 1943 150,000 men still did not have their own rifles.

Although Mr Eden’s broadcast had promised uniforms for the volunteers the War Office knew by the next day that the best it could manage immediately was an armband stencilled with ‘LDV’. 13 days later a contract for 250,000 was placed with The Brook Manufacturing Company, Northampton-based makers of ladies’ skirts and blouses, further orders in June and July increasing the requirement to one million. 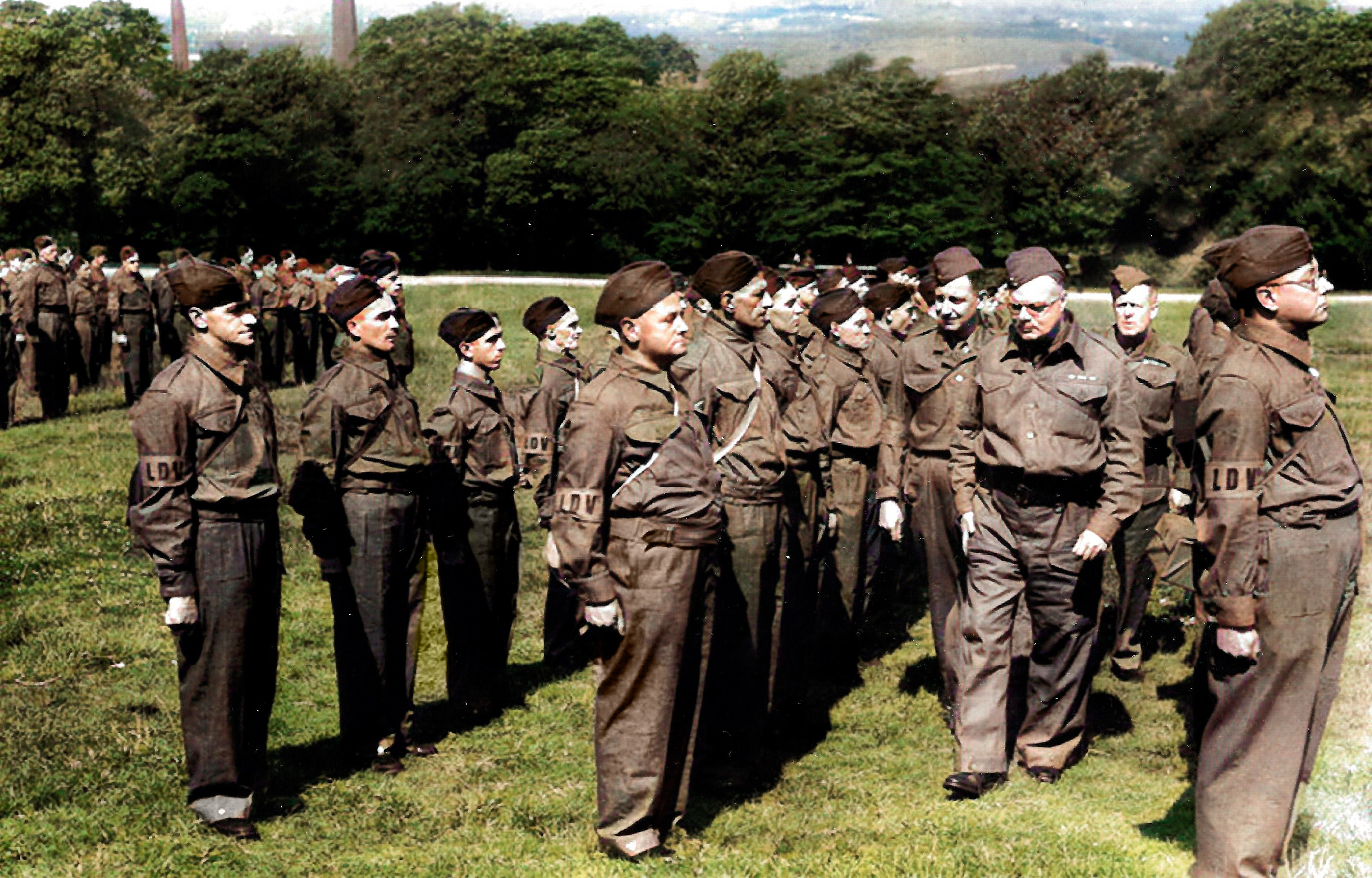 Although told on 6 June 1940 that units would receive one armband for each volunteer, which was to be worn securely stitched to the right arm of uniform or civilian clothing, supplies were slow to arrive. By the time the War Office acknowledged in July that deliveries of official armbands were haphazard, improvisation and local purchase had already compensated for lack of an official item. A Buckinghamshire unit noted that: ‘Volunteers ... attended the first parade wearing LDV armlets made from puttees worn in the last war by their Section Commander, with sewn on tape letters’. In Devon: ‘Various colours were at first donned until Captain Moore RN obtained some fawn coloured cloth which a Ladies Working Party made into brassards with white tape lettering’. The resulting variety of what contemporary sources refer to as armlets, armbands or brassards had LDV printed, embroidered or sewn in black, white or red letters to backgrounds of khaki, white, red, and in one case tartan, some incorporating the name of the area where the unit was raised or the name of the organisation raising it.

These home-made efforts were soon replaced by semi-official versions provided by the County Territorial Army Associations which, with GHQ, Home Forces fully occupied rebuilding the army to repel an invasion, were taking charge of this new force having lost its role administering local TA units when war broke out. By July, Greater Manchester units wore armbands with a crown above ‘LDV’ with letters identifying the Zones and Groups into which the new force was organised. Denied the right to use established military ranks, the appointments of LDV senior ranks appeared on their armbands. Sussex wore ‘Comp Commander’ above ‘LDV’, armbands with ‘Group Commander’, ‘Ass. Group Commander’ and ‘Section/Leader’ recorded in Yorkshire, ‘Platoon Commander’ worn in Rotherham. 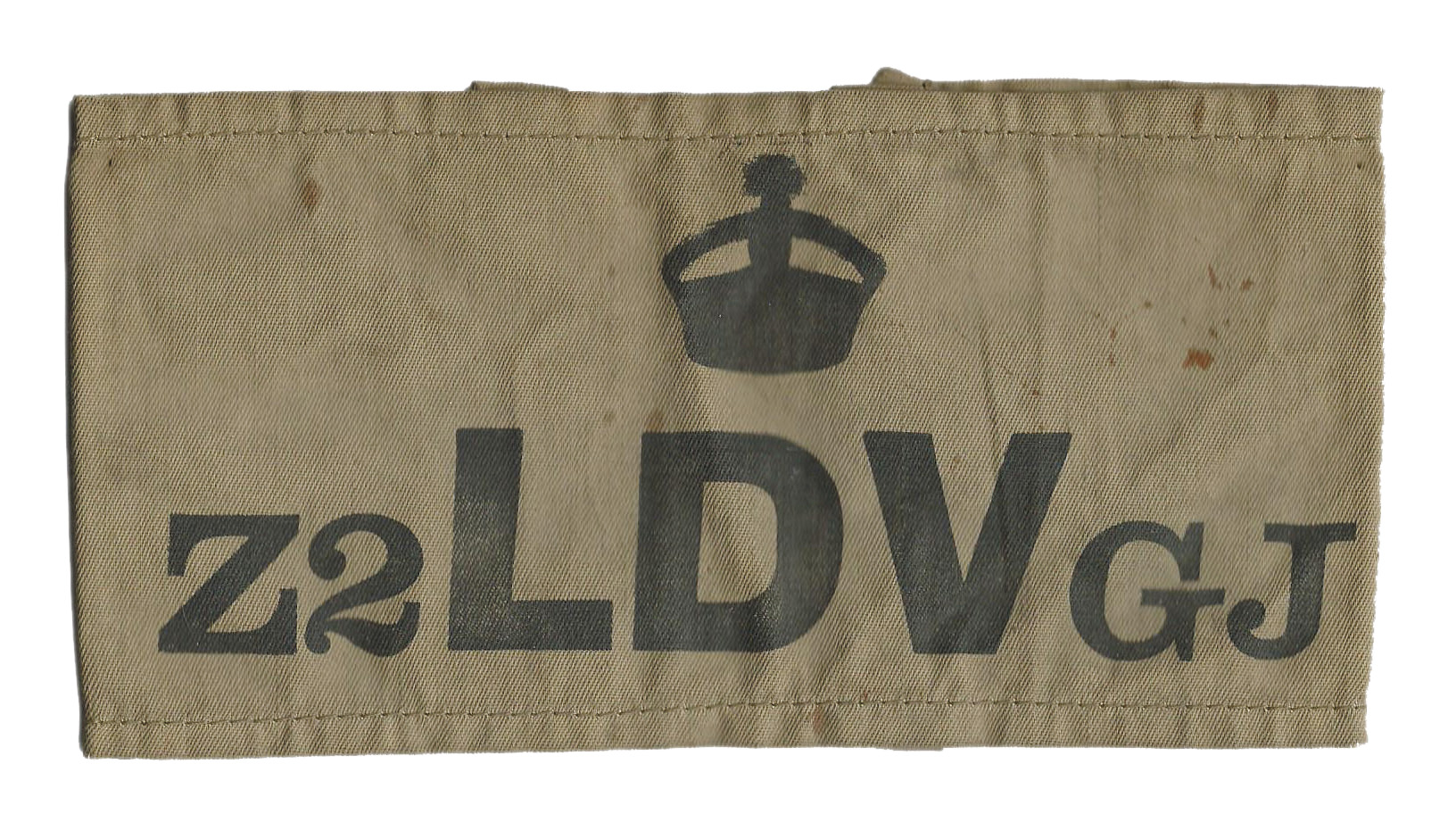 Left: A Manchester armband with unofficial crown and Zone and Group markings

As both local and official armbands had ‘LDV’ stencilled on the khaki material’ then widely used for overalls’ were thought easy to forge, the back was often certified as official using an inked rubber stamp similar to those used on letters and invoices in offices. Once enough were available for every volunteer, the backs of armbands in Manchester carried the wearer’s National Registration number. The armbands of General Post Office units which, to maintain essential communications would be more mobile than most units, were stamped with the GPO logo.
Without official uniforms, additional evidence of LDV membership was provided by identity documents, supplementing the National Registration Identity Card carried by all Britons since September 1939. Most were simple printed cards, although some added the bearer’s identity card number and description, that issued by the Liverpool Post Office Company in August including a photograph.

The day after Mr Eden announced that volunteers would receive uniforms 87,000 sets of denim overalls were hastily despatched to the Army’s Home Commands. By the time it was announced on 22 May that linen overalls would constitute the dress of the LDV, 90,000 sets had already been issued. Introduced to the Army in 1939 two-piece, denim overall suits were issued to protect a volunteer’s civilian clothes. Limited initial supplies meant they were held at LDV posts, each man wearing them on duty then passing them to his successor, prompting one unit to note that: ‘the size worn by the last man to arrive on duty was comical in the extreme’.

Denims appear to have been issued first to units in those areas of Britain most threatened by imminent invasion, a Kent unit receiving theirs on 25 May. Elsewhere they were slow to arrive, Southern Railway’s units complaining on 24 June that they had been issued just 327 uniforms for 12,000 volunteers, London District reporting in early August having only one suit for every nine men. Even when received there were complaints, the most common that they only came in two sizes - too large or too small - and that buttons and the split rings which fastened them to the jacket were issued and accounted for separately. The arrival of a jacket with shoulder straps prompted enterprising badge makers to sell unofficial slip-on ‘LDV’ shoulder titles.

By 6 July there was a firm commitment to issue denims to every volunteer, 200,000 of the 500,000 suits available issued to units by the middle of the month. At the end of August it was announced that denims were only a temporary issue and would be replaced by Army serge battle dress for cold weather although only at present for those not already in possession of denims. Although a decision was made on 4 November to replace all denims with battle dress the changeover took six months and replacements proceeded throughout the winter of 1940/1941. 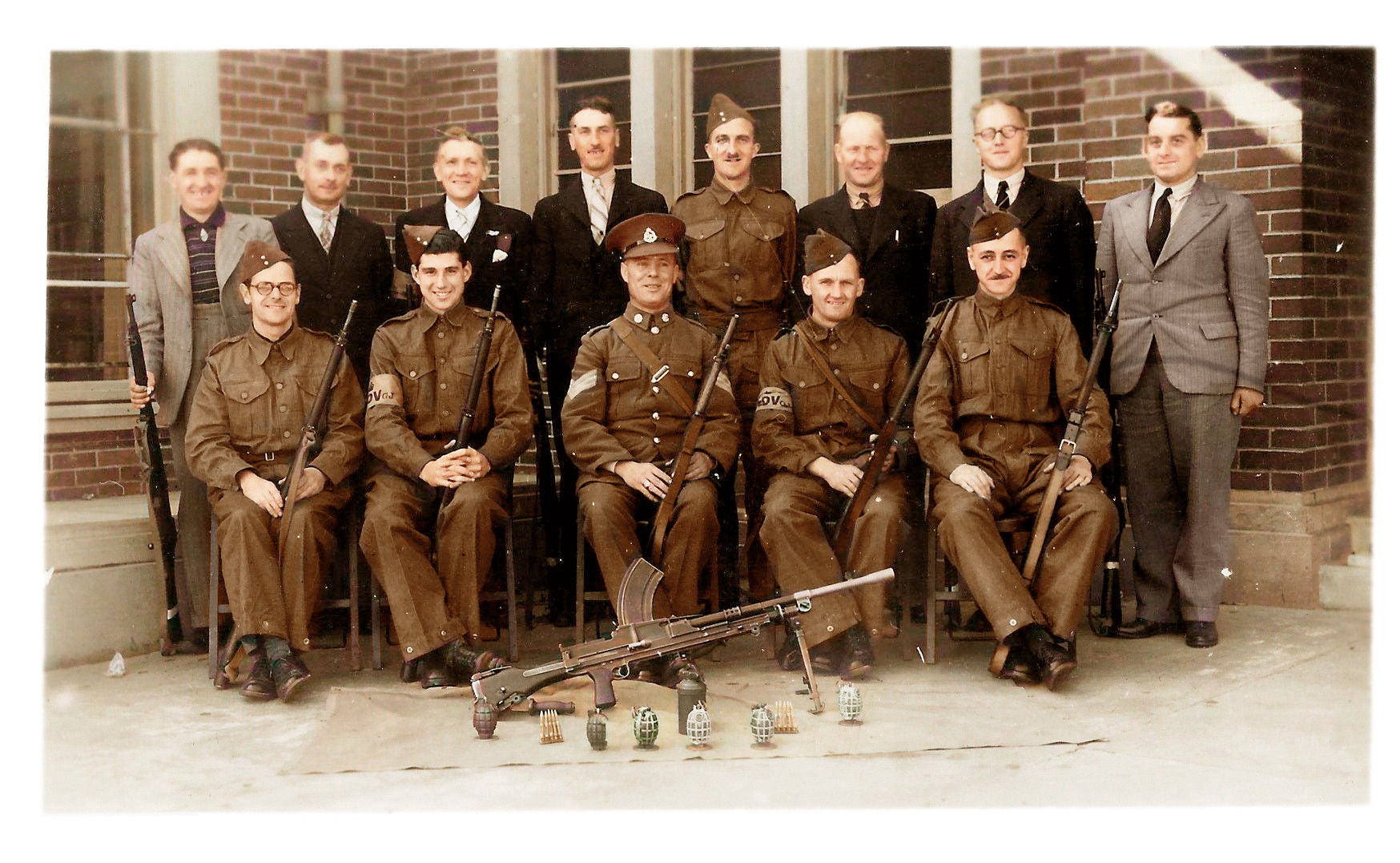 Right: A Lancashire LDV group, only two men having armbands, the Bren gun and grenades probably on loan

The headdress worn by most of the British Army in 1940, the field service cap was established as official LDV head-dress by Mr Eden’s May announcement and as they were available in quantity they arrived quickly, a Kent battalion receiving theirs by 25 May. As a result photographs of LDV in civilian clothes wearing just an armband and a cap are common. An initial shortage of larger sizes was not remedied until mid-August but by January 1941 nearly two million had been issued, Quartermasters told to issue them one size larger than the volunteer’s normal hat to get a correct fit. All ranks received Other Rank pattern caps although before clothes rationing many officers bought superior quality versions from military tailors at their own expense, some like Captain Mainwaring preferring a smarter but unofficial peaked service dress cap.

Although LDV head-dress was issued with no thought of a badge for it, cap badges were approved on 22 June, the War Office left to decide whether these would be Army regimental badges or a specifically LDV pattern. Clearly intended as a cap badge and fitted with a slider, a white metal badge with LDV in a rectangular tablet surmounted by a crown has been recorded. It was 3 August 1940 before a WO letter stated clearly that: ‘The Home Guard will wear the badge of the County regiment’ with County being the location of the unit’s HQ.
After the LDV was renamed the Home Guard at Winston Churchill’s insistence, units were told on 23 July that to avoid wasting existing armbands, short strips of cloth marked with ‘Home Guard’ had been prepared to sew over the LDV lettering. Many of the million patches ordered from Brook Manufacturing on 9 August are still to be found sewn over LDV armlets.

The newly-renamed Home Guard served in the defence of Britain until stood down in November 1944, by which time the appearance of its members in battle dress and steel helmets was far removed from the days of an armband and a cap.

Given that over a million were manufactured, the issue LDV armband can still be found for around £40, those with the added Home Guard patch fetching a little more. Locally issued armbands in different materials and colours or with added lettering sell for at least £100 and often fetch considerably more. Be aware of the many reproductions available. Original early-dated denim overalls are scarce and will cost over £100, early dated side caps to go with them fetching over £70. LDV paper work is not common; War Office instructions can be found from £20, permits, passes and identity documents from £40 upwards. 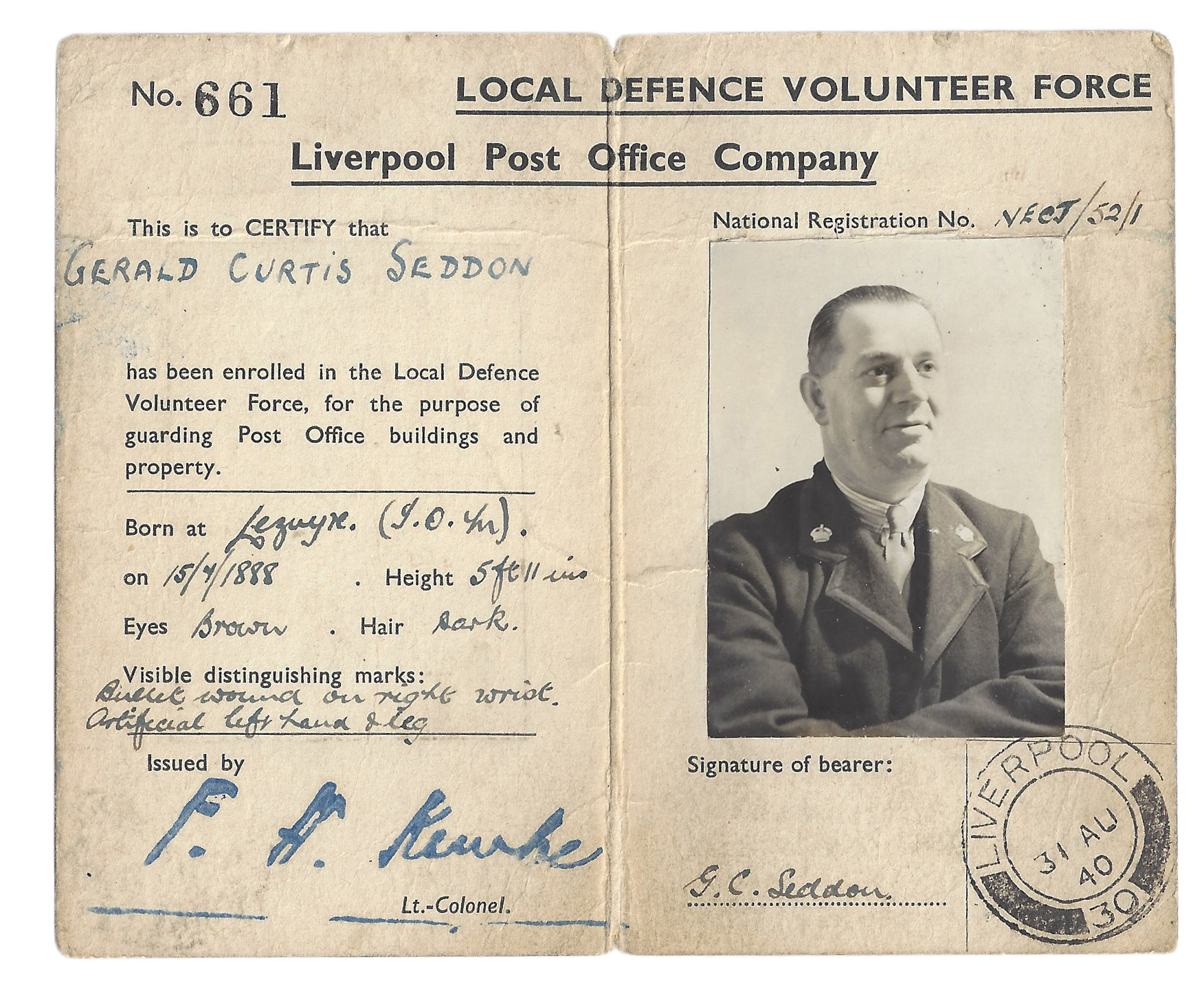 Left: A pass with photo issued by the Liverpool Post Office LDV