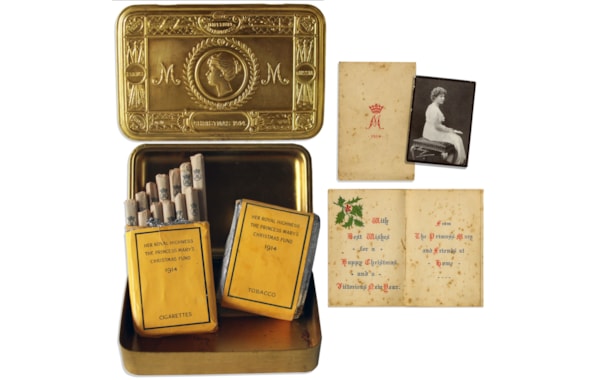 This box contains the specially printed yellow cigarette and tobacco packets, the picture of Mary and the Christmas card 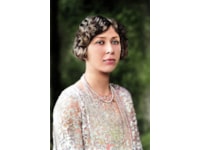 Gerald Prenderghast reveals the story behind the Christmas gift for Britain’s loyal troops at the start of WWI.

Mary, Princess Royal and Countess of Harewood (April 1897-March 1965) was the only daughter of King George V and Queen Mary. Having two elder brothers, Edward and George, it was unlikely that she would ever inherit the throne and so her education and upbringing followed the usual pattern for well-born girls of the period. She had a number of governesses who educated her alone, but with some occasional lessons with her brothers. However, she was unusual, becoming fluent in both French and German before making her first public appearance at her parents’ Coronation when she was 14, in 1911.

During WWI, she visited hospitals and similar establishments with her mother, Queen Mary, participating in projects intended to help British servicemen and their families. One of these was Princess Mary’s Christmas Gift Fund, which was intended to ensure that every British serviceman had a gift on Christmas Day. In order to raise enough money to finance the Gift Fund, in October 1914 Mary launched an appeal, asking the public to contribute money to ensure that every member of the armed forces received their Christmas Box. The Fund was still in need of money at the beginning of December 1914 but the 17-year-old Mary refused to be beaten and, shortly before Christmas 1914, advertisements were placed in British newspapers asking for donations to the Soldiers and Sailors Christmas Fund, which resulted in the collection of £152,691.

The Christmas Box
The gift box which arrived in the trenches was of two types: a silver box for officers and one in brass for enlisted men. The surface of the lid was stamped with the head of Princess Mary in the centre, surrounded by a laurel wreath and flanked by the ‘M’ monogram on both sides. At the top, a decorative cartouche contained the words ‘Imperium Britannicum’ with a sword and scabbard on either side. On the lower edge, another cartouche contained the words ‘Christmas 1914’, which was flanked by the bows of battleships forging through a heavy sea. In the corners, small roundels housed the names of the Allies: Belgium, Japan, Montenegro and Serbia; France and Russia were at the edges, each superimposed on three furled flags or standards.

The tins usually contained monogrammed cigarettes in a specially produced yellow packet, tobacco, also in a yellow packet, and a cigarette lighter, together with a Christmas card and photograph of Princess Mary. Non-smokers were given a similar tin with the picture and Christmas card but with sweets or lemon drops, a khaki writing case and a bullet pencil instead of cigarettes and tobacco. Nurses had a special brass tin which contained chocolate, while Indian Army personnel had a smoker’s box supplemented with a packet of spices.

Originally intended for every sailor afloat and every soldier at the Front on Christmas Day 1914, eligibility was almost immediately extended to anyone wearing the King’s uniform on Christmas Day. Although over 400,000 boxes were delivered by Christmas 1914, distribution was not fully completed until 1920, by which time estimates suggest that over 2.5 million boxes had been distributed to British servicemen.

Princess Mary’s later war work
After the success of the Gift Fund, Mary turned to other charitable work in the later stages of the war. During WWI she participated in promoting and encouraging the Girl Guide Association, the Voluntary Aid Detachment and the Land Girls, and in June 1918 she began a nursing course at Great Ormond Street Hospital, during which time she worked in that hospital’s Alexandra ward for two days every week.

She married Henry, Viscount Lascelles in 1922 and they had two sons, George and Gerald, before her husband’s death in 1947. In 1926, she became Commandant-in-Chief of the British Red Cross and during WWII she was Commandant of the WRAC and Princess Mary’s Royal Air Force Nursing Service, which still carries her name today. After WWII, she was appointed Chancellor of the University of Leeds in 1951, and in 1965, ignoring the attitude of her family, she visited her brother, the Duke of Windsor, while he was recovering from eye surgery in the London Clinic. She died of a heart attack later that year, aged 67, while walking with her eldest son at Harewood, where she was buried. 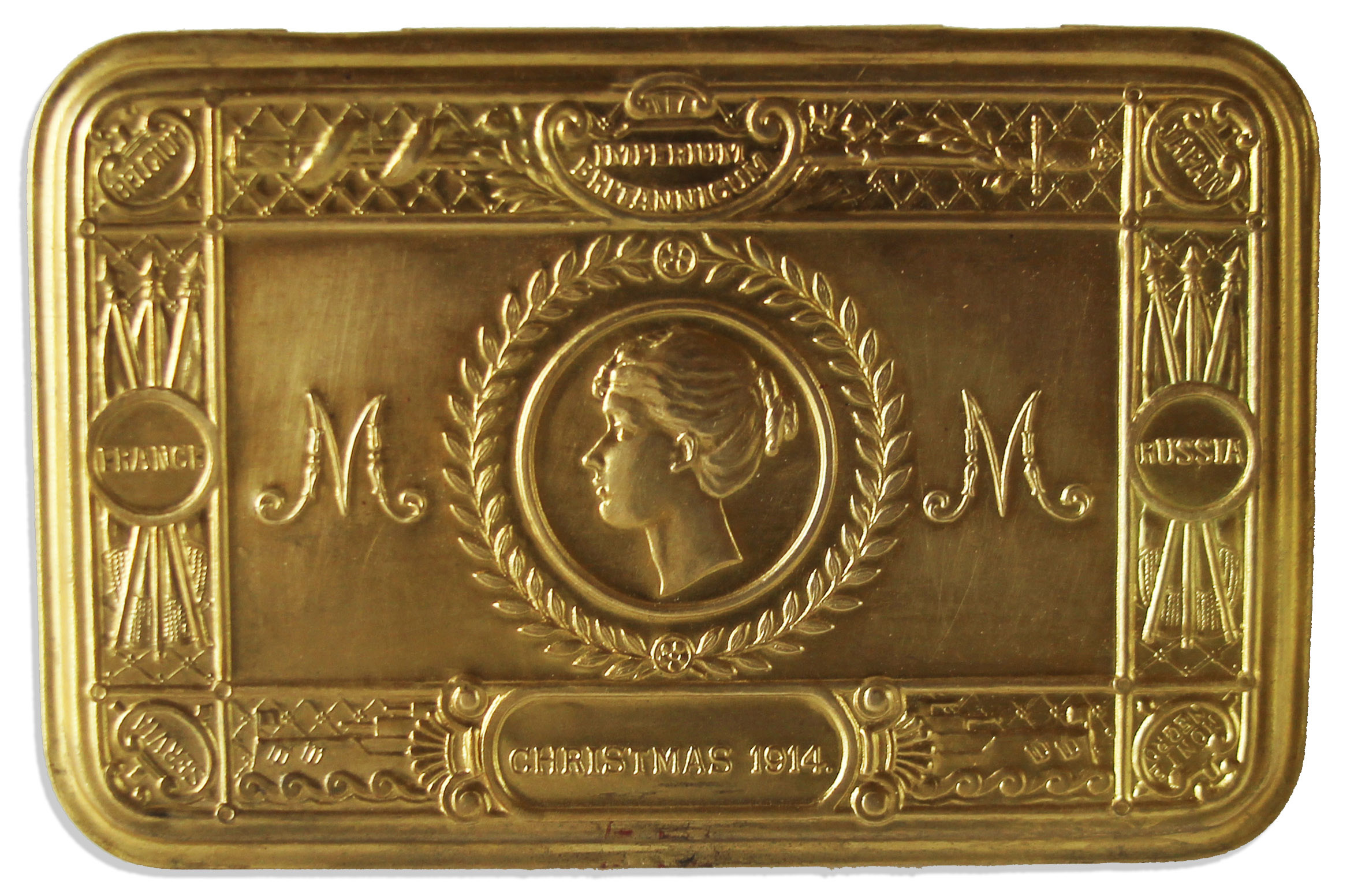 Collecting Princess Mary Christmas Boxes
There are five types of box available to collectors and their price varies considerably depending upon how much of the original contents remain intact:

The officer’s silver box: These are very rare and do not appear at auction very frequently. Empty box – £200, with contents – up to £500.

The enlisted man’s brass box: These are much more common than the silver boxes and appear frequently at auction. Empty box – £30-£50, with contents – up to £150. 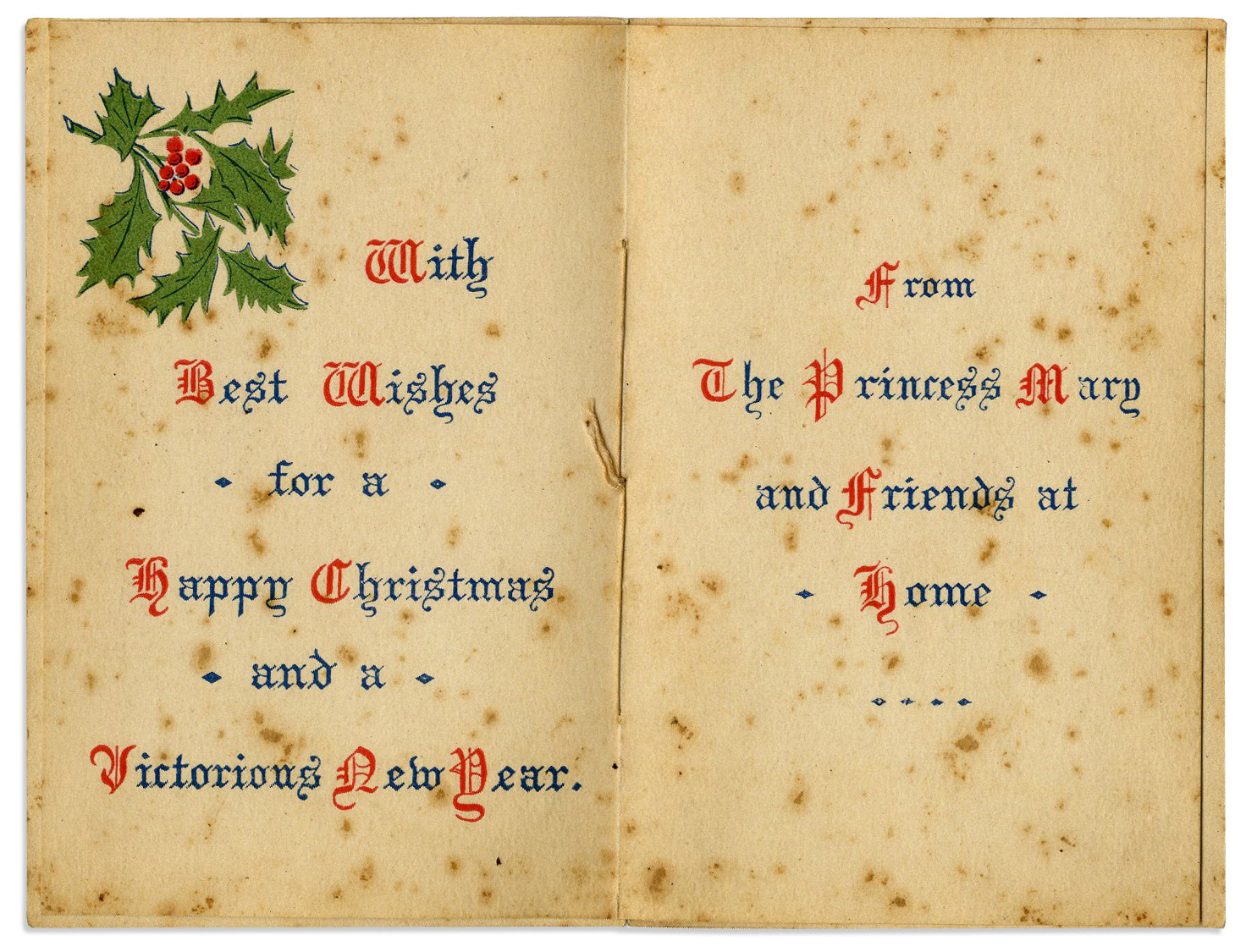 Replicas
Replicas of these boxes are freely available and sell for much less than the genuine article, costing between £4 and £8. Genuine boxes tend to exhibit considerable wear, which differentiates them from replicas, but this is not always the case and care in purchasing should be exercised.

21 January 2021
Tweets by The Armourer Magazine