Adrian Roads discovered a tired flintlock at auction and reveals its history.

In 2000 I attended an auction and was fortunate enough to come away with a tired but intact example of a British flintlock Sea Service Pistol. Its price was well below what one would expect to pay for such an item because, besides being in poor condition, its lock lacks a crowned GR royal cypher and ‘TOWER’ marking. However, the lock does bear a crown over ‘2’ inspector’s mark, in addition to crowned inspectors’ marks to barrel breech and stock. As a collector of early British military issue smallarms this was satisfying to me, and so it earned a place in my collection, at least until a better, affordable, example came along.

The pistol dates to the early 19th century, a time when England, and much of Europe, was embroiled in the Napoleonic Wars, which culminated in the Battle of Waterloo in 1815. It was not unusual for the Board of Ordnance to supply its forces with arms from the commercial market when the situation required it, such as in times of war when its own stores were depleted. Such arms were examined and stamped with an inspector’s mark, a crown over a number, if accepted into store. Such, it was assumed, was the history of this pistol. Some restoration was required, and the barrel retaining pins, jaw clamp screw and belt hook are replacements; the belt hook is a restored original Board of Ordnance example. Rust removal and very minor stock repairs were also needed, but the pistol did not require much work to upgrade it from below average to reasonably good condition, even retaining its original ramrod.

The Flintlock Sea Service Pistol has a 12in (306mm) barrel of .56in calibre. The lock face is stamped with the aforementioned crown over ‘2’ and engraved with the maker ‘W BROWN’, while the lock rear is stamped with a small ‘M’ and also a faint ‘W’. The barrel breech is stamped with the London Gunmakers Company proof and view marks: a crown over entwined ‘GP’ and a crown over ‘V’. There is also three crown over ‘S’ stamps, their font size and detail indicating a different stamp being used for each. The underside of the barrel has a small ‘S’ stamp and numerous assembly marks. There is also a mark below the barrel tang resembling a ‘T’. The stock is marked with a large crown over ‘S’ in at least two places and there are two smaller crowned inspection marks with an indiscernible number/letter. All parts have lightly chiselled assembly marks and there is a modern six-digit number stamped on the trigger-guard. 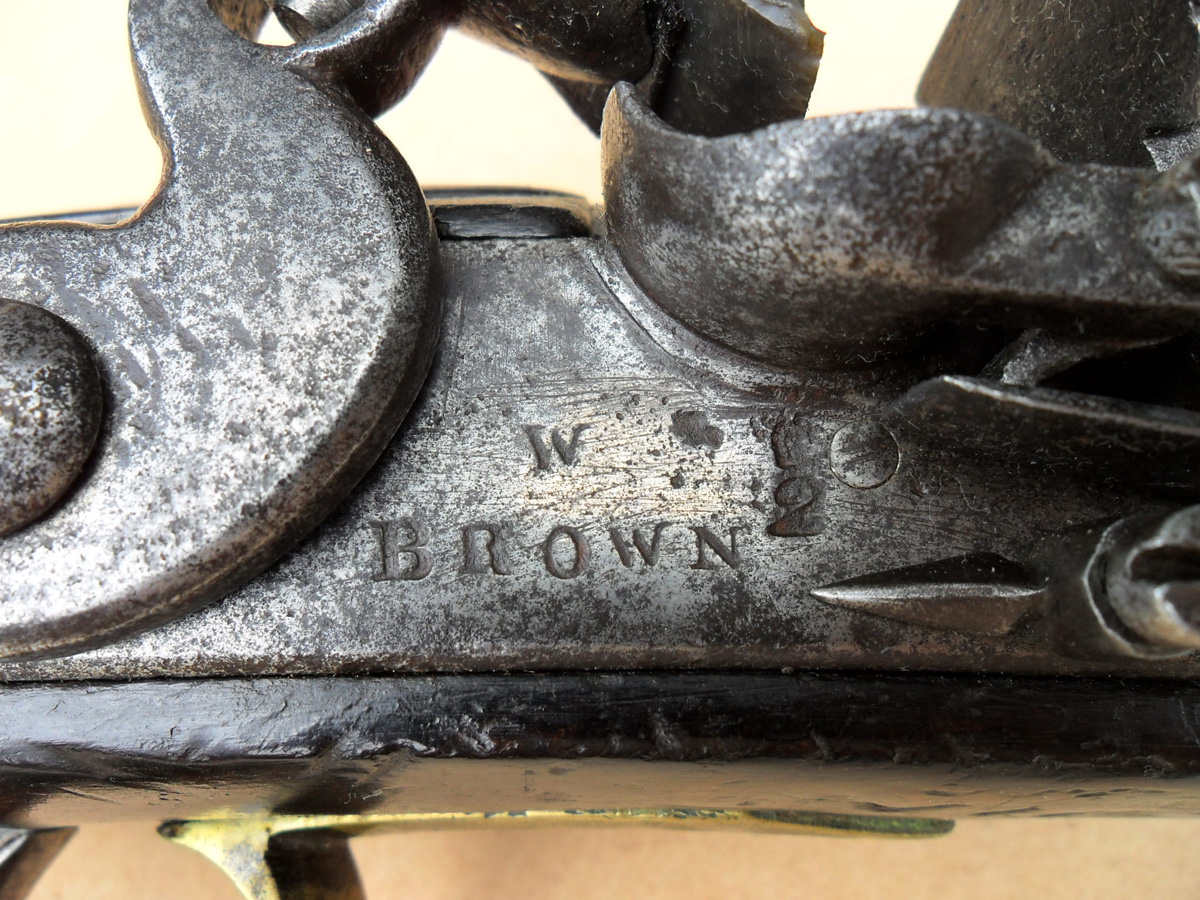 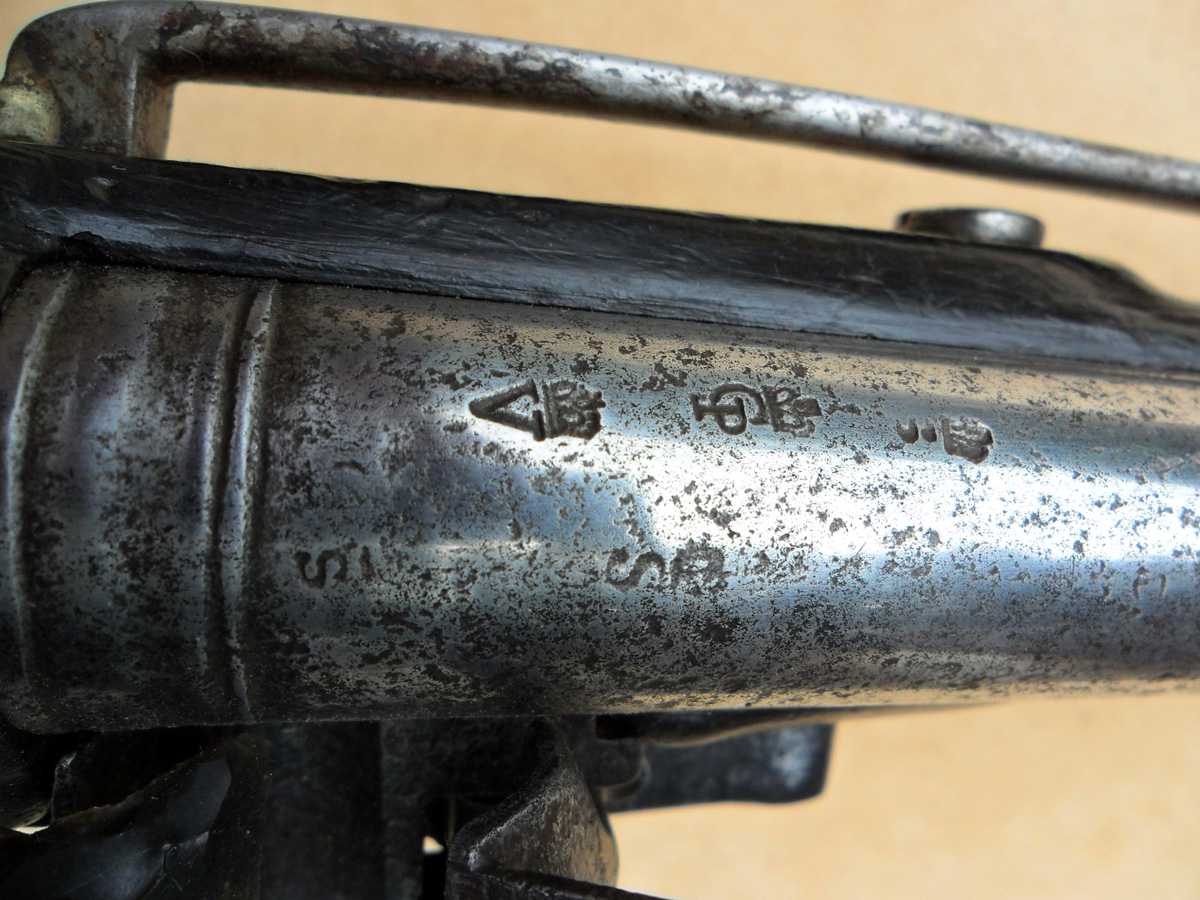 So the pistol remained until very recently when a fellow collector, with an interest in flintlock pistols and a soft spot for Sea Service Pistols in particular, examined it during a visit. He noted various differences, particularly in the brass fittings, between this and a regular Ordnance issue Sea Service Pistol, as is expected with an arm made for the commercial market and not to an Ordnance pattern. After his visit he recommended referring to David Harding’s excellent An Introduction to East India Company Smallarms c.1775-1851, which is a distilled version of his epic four-volume set on the same subject, and with some new information added as well. Comparison of this pistol with examples in Harding’s section on Ship’s Store Pistols shows that it exactly matches those depicted and that the detailed descriptions provided are also entirely accurate for all elements of this pistol. Harding notes that the several stamps, the crown over '2' on the lock and the several crown over 'S' stamps on the breech and stock are East India Company inspection stamps.

Shipping was central to the EICo’s (East India Company) existence and although the Company owned a varying number of ships they relied mainly upon contracting privately owned armed merchant vessels to move their trade goods across the oceans. To ensure that these goods were adequately protected against privateers etc. the Company stipulated that each ship had to furnish itself with a list of smallarms, a list that included 30 pistols. The Company inspected each ship’s arms and ammunition before it set out on a contracted voyage, stamping each arm with a crown over 'S' to signify that it passed; the initial inspection received a crown over a number to the lock plate. Ship owners would have sought their arms from gunmakers who knew what the EICo wanted to ensure that they were of correct specification and quality. It was also usual for the ship’s name to be engraved along the top of the pistol’s barrel.

Harding shows a specific example that has its ship’s name, Thomas Grenville, engraved along the top of the barrel. Looking closely at the example under study one can detect the distinct remnants of an engraved name on the barrel, which had previously not been noticed. Had this been noticed, however, it would have been of little use, as too little remains readable without some form of reference to direct an investigation. Turning to the internet, specifically a forum frequented by fellow collectors and researchers of pre-20th century British military firearms at http://britishmilitariaforums.yuku.com, fellow forum members provided a link to a list of East India Company ships and offered digitally to enhance images of the barrel engraving to enable a better chance of detecting any letters. Fortunately a few letters could be made out and, referencing this against the list of 1,718 EICo ship names, it was a straightforward, if time-consuming, matter of seeing which ship names matched both the date range of approximately 1790–1830 and included the few discernible letters and parts. Eventually, and perhaps quite incredibly, it narrowed down to only one suitable candidate: the ship Tottenham. 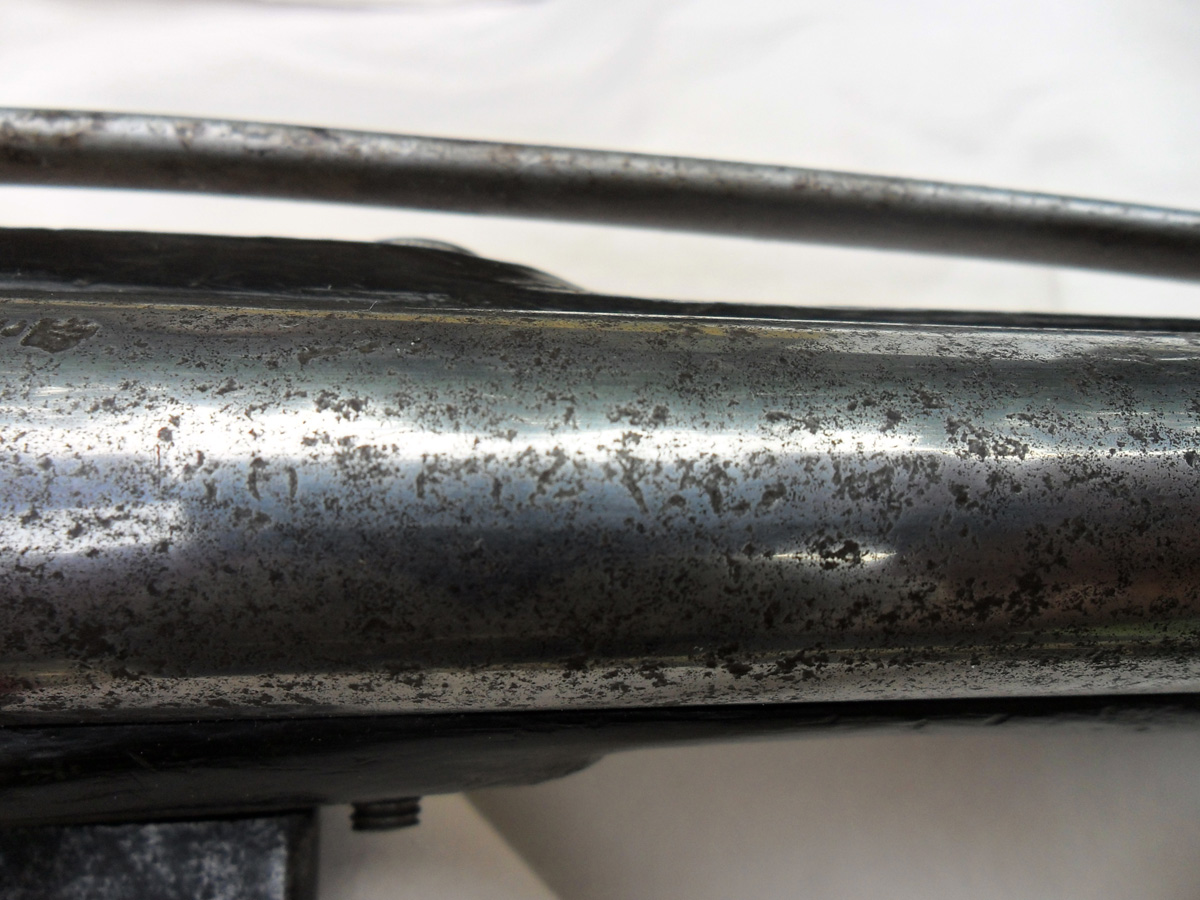 Tottenham was built for a London ship owner, Robert Wigram, by Thomas Haw at Stockholm in 1802. Her built tonnage was 517 tons, though some records show figures varying up to 557 tons, and she was 102½ft long with a breadth of 31ft. A three decker of the second class and ship rigged, she was armed with 16 guns and had a crew of 50. The EICo contracted her for six voyages at £14 per ton of freight. A summary of these voyages follows:

Most of these voyages were made while England was at war with France and her ally Spain. An account survives of Tottenham, along with other merchant ships and whalers, being escorted by HMS Urgent and fleeing from four enemy ships, believed to be Spanish.
After the sixth voyage for the EICo the Tottenham was sold for use as a transport ship. On 1 February 1818 she sailed from London for Botany Bay, Bengal and Madras. She had on board 200 convicts bound for Botany Bay and 34 soldiers drawn from the 46th and 48th Regiments under the command of Lieutenant Mitge, acting as guards. 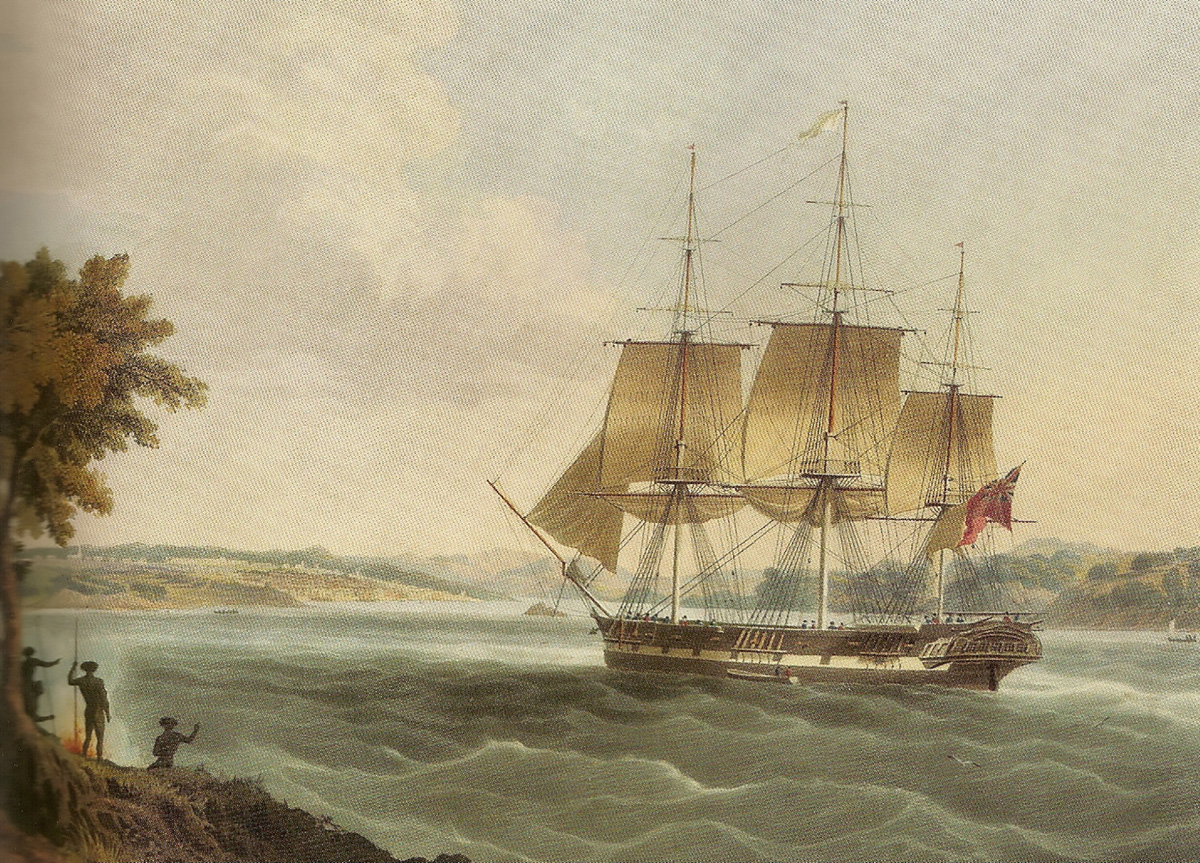 The journey was not without incident; she struck on a reef on virtually the first day, requiring some refloating and several repairs, along with subsequent departure delays until 27 March. During the long, particularly arduous voyage her convicts and guards developed scurvy, requiring the ship to take on fresh supplies at Rio de Janeiro. By the time she arrived at Botany Bay on 14 October 1818 there had been much illness. A total of 211 men had been on the sick list, one guard had fallen overboard and drowned, ten convicts had died and many men were ill. The surgeon was highly praised for his work in such difficult circumstances. The ship had also experienced unrest, with rumours of a mutiny by the convicts, though nothing came of it. On one occasion a warning shot was fired by a guard when convicts attempted to extinguish his light. Tottenham departed Botany Bay on 3 March 1819. Her captain, who had become ill, died in Botany Bay; this and adverse winds had delayed the departure for the next stage of her journey. This was to be Tottenham’s final voyage; she returned to London on 30 March 1820 and in that same year she was sold to be broken up.

The numerous EICo inspector markings on this pistol show that it accompanied the ship on most, if not all, her voyages while contracted to the East India Company. One can speculate that when she was sold as a transport that possibly her smallarms, including this pistol, were sold with her, but that remains unknown. Certainly the interest in this particular pistol has increased, with a value now of over $2,500AUD (£1,463); it was both a challenge and a pleasure to unveil its history.