The Cross of Honour of the German Mother 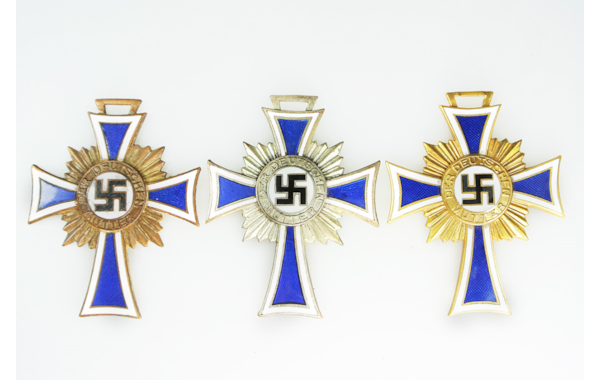 The three grades of the medal 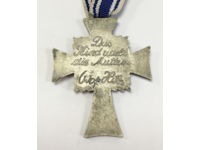 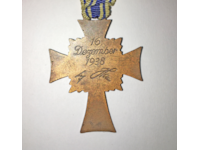 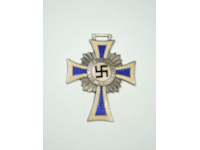 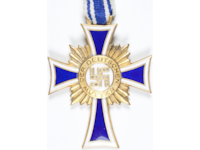 Duncan Evans takes a look at the civil award in Nazi Germany that encouraged larger families for Hitler’s expanding state.

It was Adolf Hitler’s joint experiences of witnessing the manpower losses on the Western Front in WWI and deaths in his immediate family that were the behind a desire to encourage German mothers to have large families.

Three of Adolf’s siblings died as children and even his mother, who he doted on, died when he was just 18. By the time the National Socialists gained power Hitler had already formulated plans for expansion in the east with Lebensraum, or living space. The army, as well, would need those large families to provide a stream of new recruits. The honouring of motherhood was also another way of encouraging traditional German values to counter what Hitler, and many saw as the decadence of the more liberal, roaring ‘20s and early 1930s.

The result was a civil award that recognised the contribution of German mothers to the nation. The Ehrenkreuz der Deutschen Mutter, translated as the Cross of Honour of the German Mother, or as it more informally known, the Mother’s Cross, was instituted by statutory order on 16 December, 1938 by Adolf Hitler. The Cross was originally to be awarded on the second Sunday in May, or Mother’s Day, but as some three million German women were already eligible this was extended to include other important national occasions. It did mean that the first awards weren’t given until May 1939. The Mother’s Cross came in three grades, as follows:

There was also a miniature version of each Cross, measuring 2cm, with a ribbon bow, designated for everyday wear only. The bow could also be worn on its own. The miniature was not awarded in itself, it could be purchased from authorised suppliers on the high street or directly from approved medal makers. Other, related items such as brooches were not officially sanctioned.

Designs were drawn up for a Mother’s Cross in gold with diamonds set into the central swastika, to reward mothers of 12 or 16 children, but these were never awarded or produced. An example was actually auctioned in 2013 for around $3,000 but with a back-story of documentation destroyed by air raids and a finish that looked like it was made yesterday, it was undoubtedly a modern production.

Originally the award was to mothers from Germany only (Reichsdeutsche) but was later extended to cover ethnic Germans from Austria and Sudetenland (Volksdeutsche) after those countries were incorporated in the Reich. As it was intended to reward and promote motherhood it had both rigorous qualification criteria and also provided benefits to a mother so awarded.

To start with, both parents had to be of pure German blood heritage and that their parents were not Jewish or from other foreign origins. A signed declaration from the mother was sufficient for this, unless there were doubts about her background. Then, the mother had to be worthy of the award, which meant no genetic abnormalities, a reputable moral standing and no prior convictions. Finally, all the children had to be live births, free from defects and that the parents were bringing them up to be respectful and devoted members of the State.

The benefits of being given the award included preferential treatment in shops and using public service, respect in society and being assigned help from the local government, in the form of a nurse or nominated individual, in the morning, to help with the children.

Find out more about the the design of the cross, how to spot fakes and valuations inside the May 2018 issue of The Armourer.