Reichsarbeitsfuhrer Konstantin Hierl, leader of the RAD. Holder of the Golden Party Badge

The RAD as it was finally called, underwent a number of name changes throughout its history.  Originally called the Deutscher Arbeitsdienst (German Labour Service), Freiwilliger Arbeitsdienst (Voluntary Labour Service, FAD), or The National Socialist Labour Service (NSAD), the organisation was set up by Konstantin Hierl who was a WWI and Friecorps veteran. Hierl’s idea pre-dated his association with Hitler’s National Socialist party. Whilst in the German Reichswehr, he proposed the establishment of a labour service for fit males between the ages of 17 and 35. This was put forward not only to help Germany get back onto her feet, but to help with social reform of moving Germany beyond the class based structure, held together by traditions from the past, using peoples’ abilities to the best advantage. 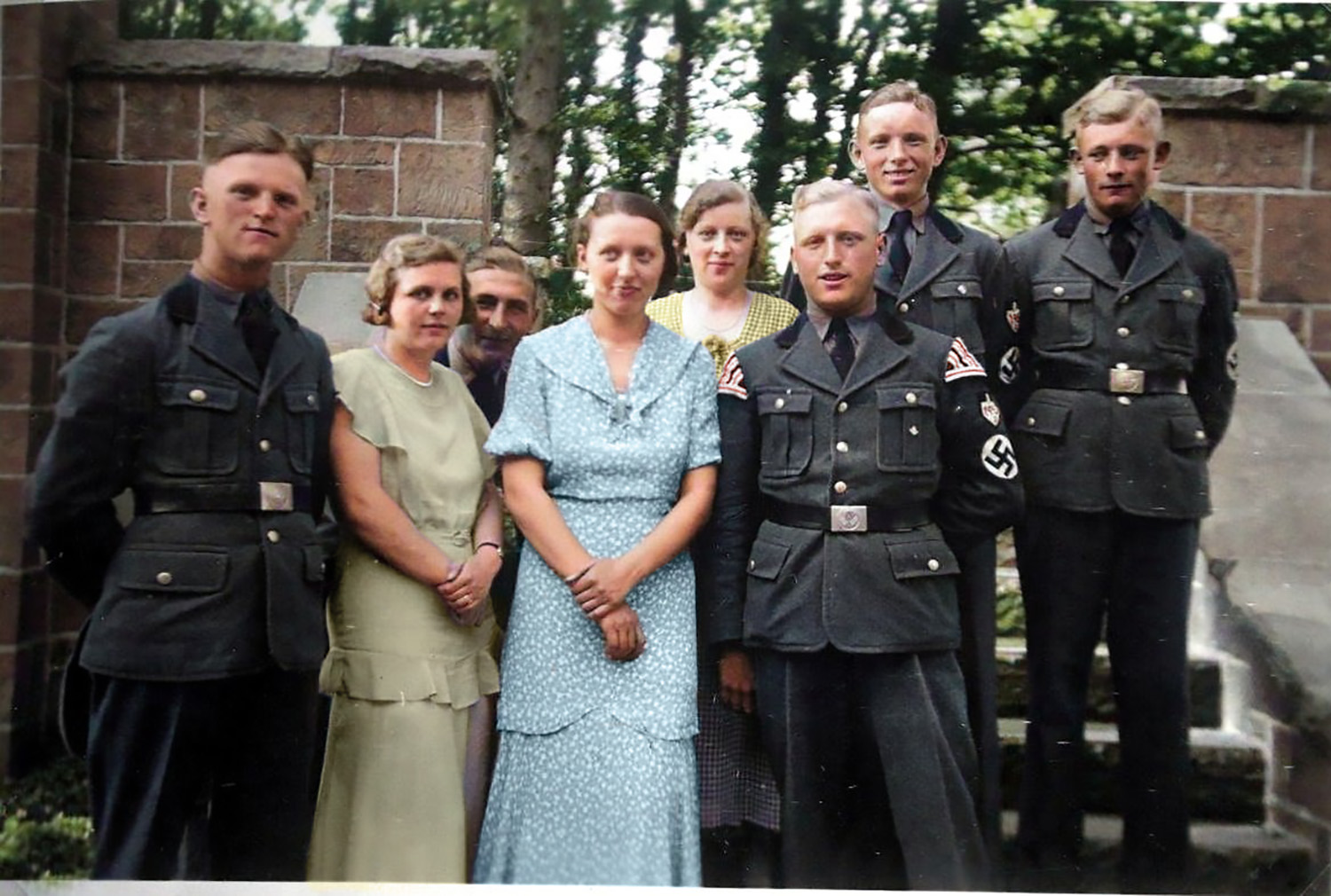 Dissatisfied with the Reichswehr, he retired in September of 1924 and joined his comrade General Ludendorff when he founded the Tannenberg Bund in 1925. Hierl became the organisational leader for South Germany but, once again, his Labour Service plans were not advocated. So he left, joining Adolf Hitler and the NSDAP on 20 April 1929. Hitler was well aware of Hierl’s military and organisational skills and put him in charge of the party’s Organizationsabteilung II (organisation department) , with an office in the Brown House in Munich and was commissioned to come up with a working Arbeitsdienst Plan (labour service plan). This is indeed what he did. Hierl was also elected to the Reichstag as a National Socialist Deputy in 1930 where he put forward his state labour plan. This benefited from Germany, like much of the world, slipping into the Great Depression of the 1930s. The then-German Chancellor Bruning, envisioned these labour camps as only temporary to help the unemployed. Some German states used the labour service for farming, others construction. All service in this organisation was voluntary, hence the title Friwilliger. The Treaty of Versailles had banned any compulsory labour service because it feared that it would have military training elements involved.

As time went on, these camps became state-wide and state funded, with leadership courses, training and research camps set up throughout Germany.
With Hitler becoming Chancellor in 1933, the RAD started to absorb all the other labour services, both local and state run. Also, by this time, a uniform had come into effect with its own distinct hats, insignia and ranks. Young men were now being conscripted into the RAD to serve for a six month period, after reaching the age of 19. Young women were also eligible to enrol and many did. The Womans Labour Service (Frauenarbeitsdienst FAD) then being incorporated into the RAD, as the RADwj in April of 1936. They too were given their own uniforms and insignia.

The RAD first took part in the 1934 Annual Party Rally at Nuremberg where 50,000 members paraded, with the RADwj following on in 1937.  Membership was expanded in 1938 to Austrians and ethnic Germans in Sudetenland and Memelland. 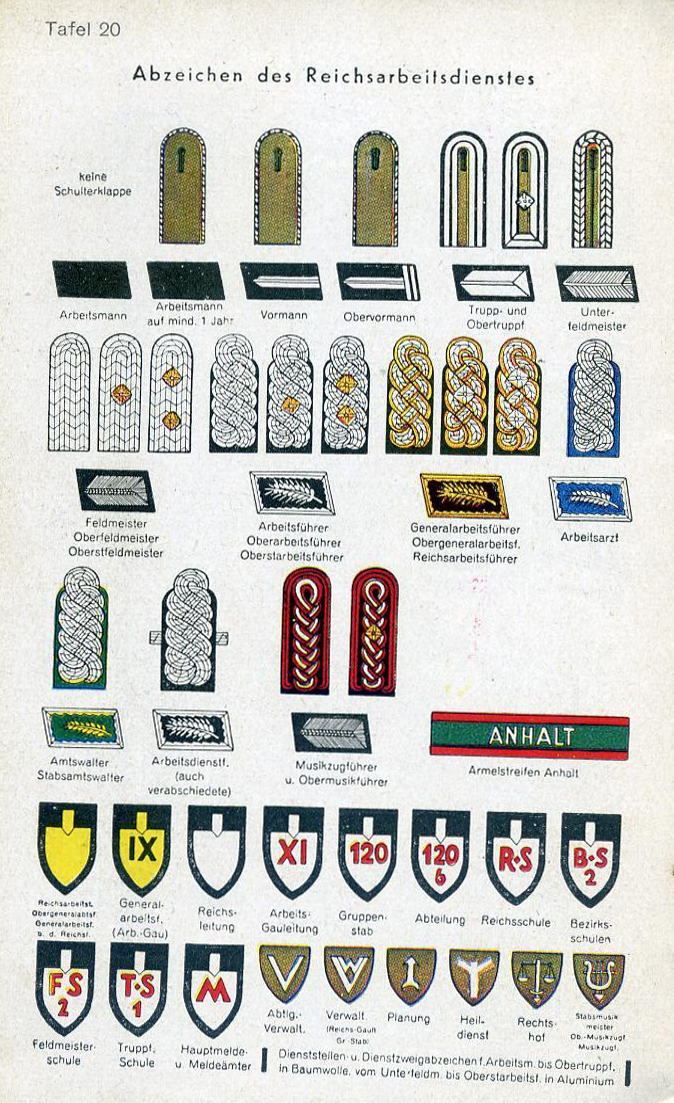 Right: A colour plate of RAD insignia, taken from a Luftwaffe diary from 1943

The organisation was set up along semi-military lines, with members from the RAD serving in a combat capacity before the end of the war. Members of the RAD could be highly trained, with many courses open to people with ability. The RAD was used within Germany and the occupied territories on a number of projects, and members could be found building runways, repairing roads, trains, cars and other vehicles, as well as farming, ditch digging, anti-tank trap construction, working as fireman, forestry workers, and other emergency relief projects. One project of which the membership of the RAD took part was the German Siegfried Line, with the 2nd award of the German Defence Wall Decoration, (West Wall Medal as is often called in collectors circles) being given to Reichsarbeitsfuhrer Konstantin Hierl, just after Dr Fritz Todt, Minister of Armaments on 23 November 1939.

Originally, The RAD members were unarmed, but as the war progressed, members of the RAD found themselves in many war zones so, by 1943, military instruction was made part of the RAD training. Young recruits from the age of 16 years six months were taught how to shoot, lay minefields, use both grenades and anti-tank weapons as well as taking part in flak gun service. During the course of World War II, members of the RAD were awarded the rare Knights Cross of the Iron Cross. The leader and founder of the RAD Reichsarbeitsfuhrer Konstantin Hierl, was awarded the very rare Golden Cross of the German Order with Oakleaves and swords, one of only 10 of these awards given during WWII. At the end of the war Reichsarbeitsfuhrer Konstantin Hierl was taken prisoner. He along with his RAD members had no indictments against them. As such the service was not banned or declared a criminal organisation like the Waffen-SS, NSDAP or the Gestapo.

The German Labour Service like many of Germany’s semi-military groups, had its own insignia and badges, as well as long service awards and decorations that members would strive to achieve. Here are some of them. 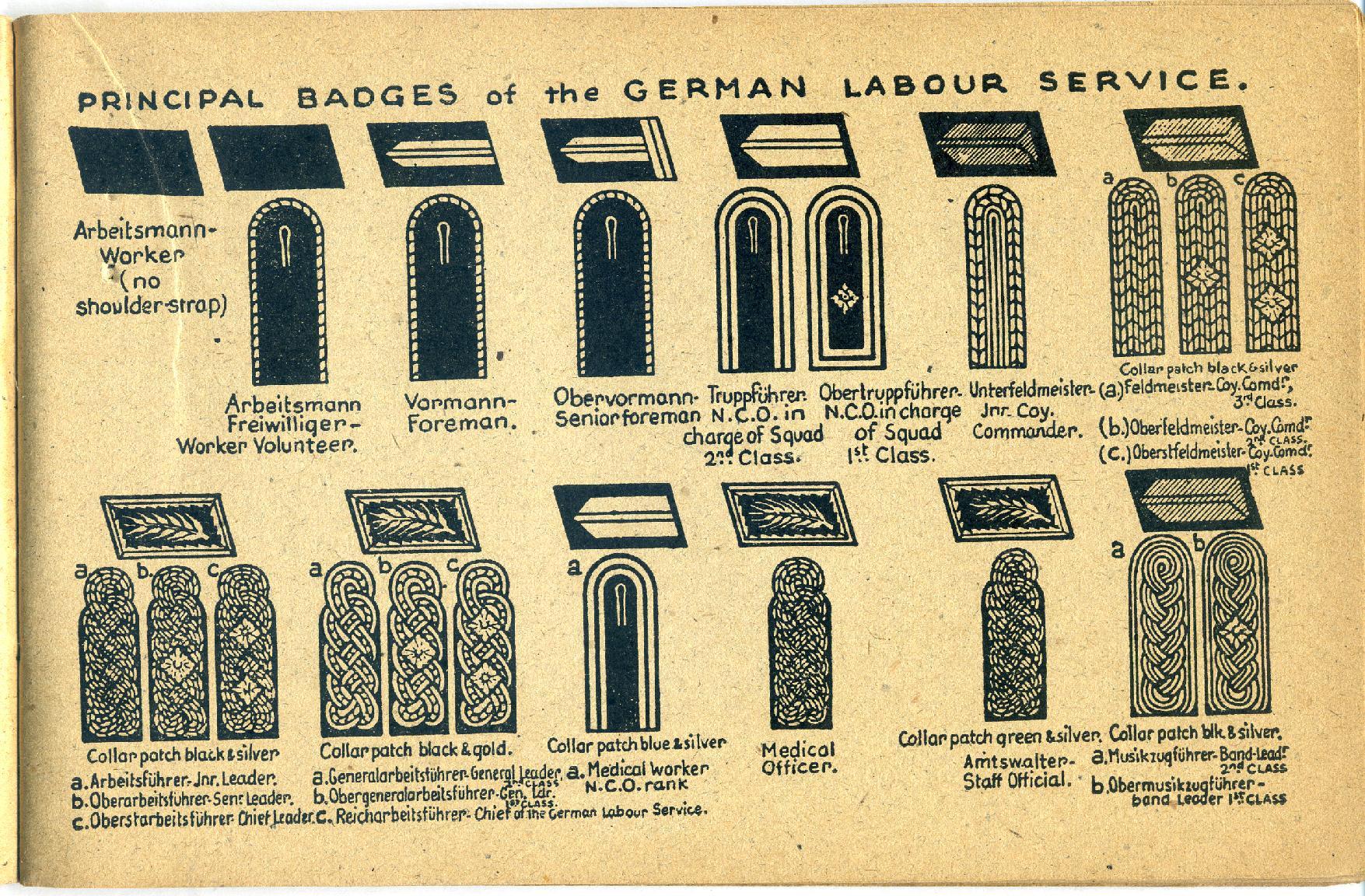 Left: The principle badges and collar patches of the Labour Service 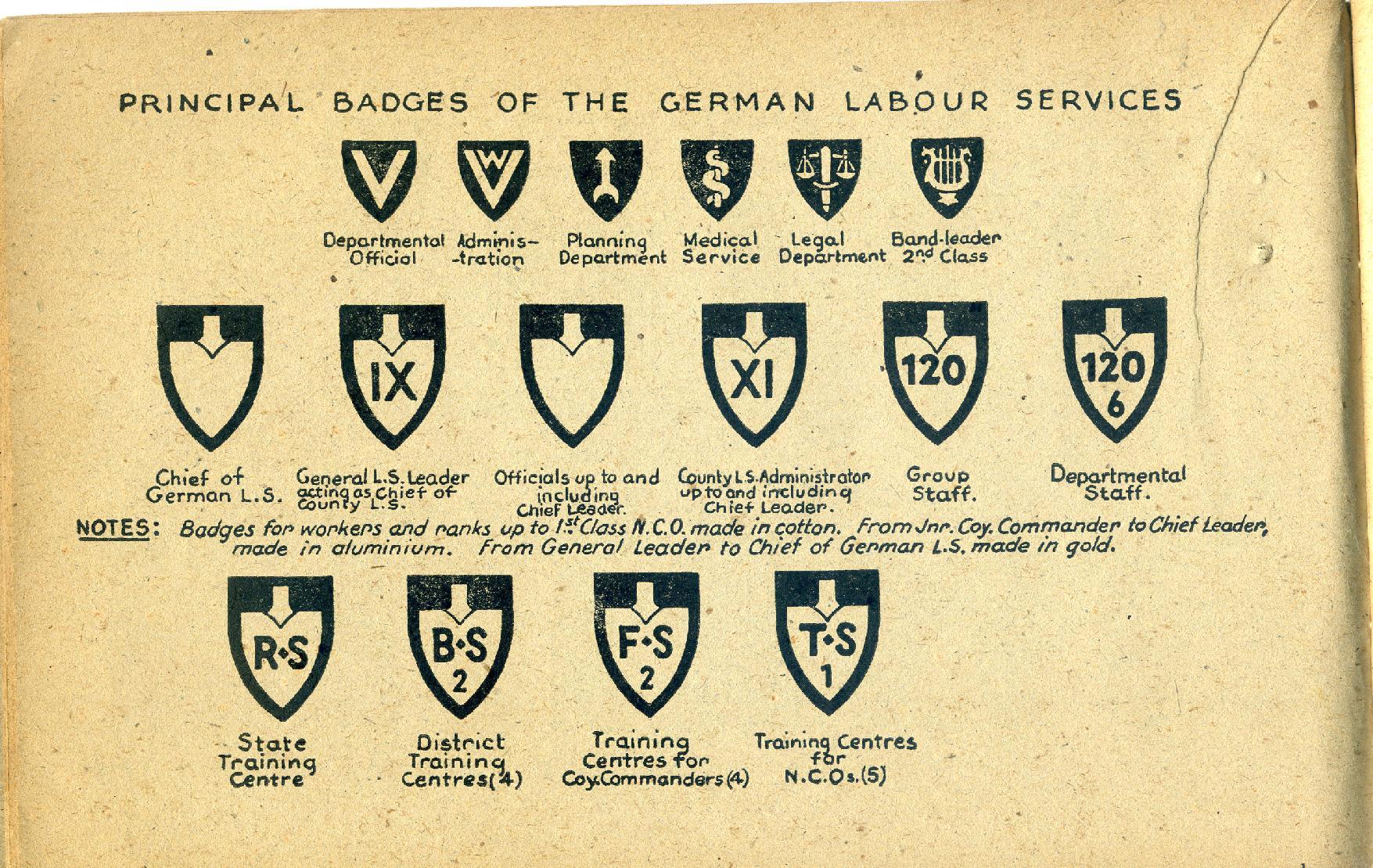 Long Service awards
Instituted on 30 January 1938. These oval medals show, to the centre, the RAD designs of the cap badge, for both male and females members.

The men’s award has an upwards-pointing spade with a swastika to the centre, flanked by two ears of corn. The women’s award has just a swastika and two ears of corn. These awards come in bronze for four years service and were worn on a plain blue ribbon. Next came a silver award for 12 years of service, again worn suspended on a plain blue ribbon. Then there is another silver award for 18 years of service, this time with the national eagle and swastika in silver on the ribbon. Lastly, the 25 year service award came in gilt with a gilt eagle to the blue ribbon. Conscripted labour did not qualify you, for this award and as such, these awards are now hard to find.

The bronze four year and silver 12 year awards come in a brown card box and the 18 year and 25 year awards come in a nice brown, hard two-piece hinged case with the years printed to the lids. Female awards can be found mounted on a bowed ribbon and, on the whole, are much rarer than the mens’ award. The 25 year service awards are very hard to find whether male or female.  It is worth pointing out that all the awards are the same size, but you will find some are made from heavy tombak and plated, while others are of a coupal manufacture and these are very light.  When worn, only one medal could be worn at any time, even if you held a lower grade example.  So you would wear your silver 12 year award and not the four year bronze award with it. There was also a rare ribbon emblem, that was only around for three months, that is in the shape of the RAD male medal centre or RAD female medal centre. This was worn over the left breast pocket on military and semi-military tunics. 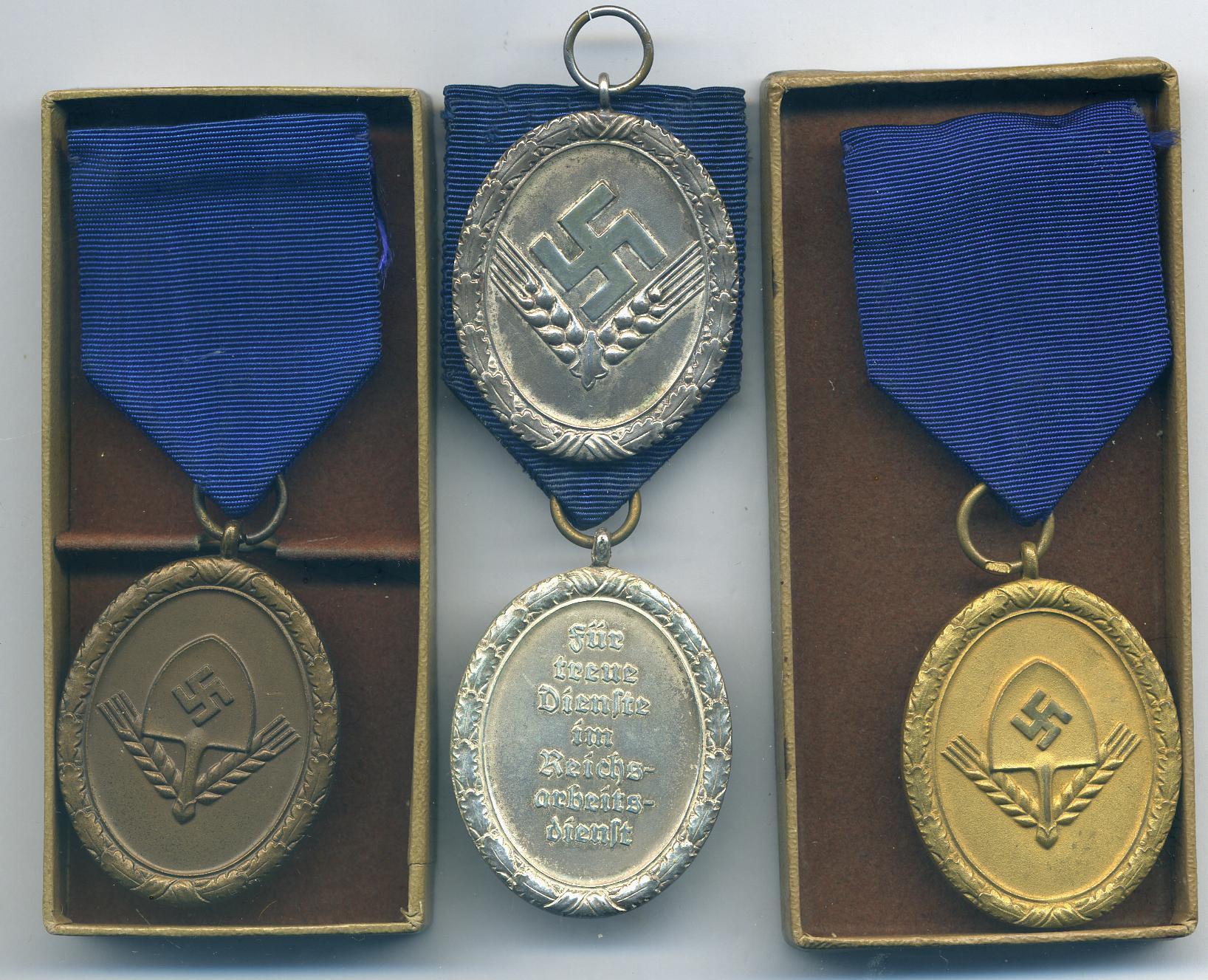 Left: RAD Service awards in bronze, silver and gilt for both men and women 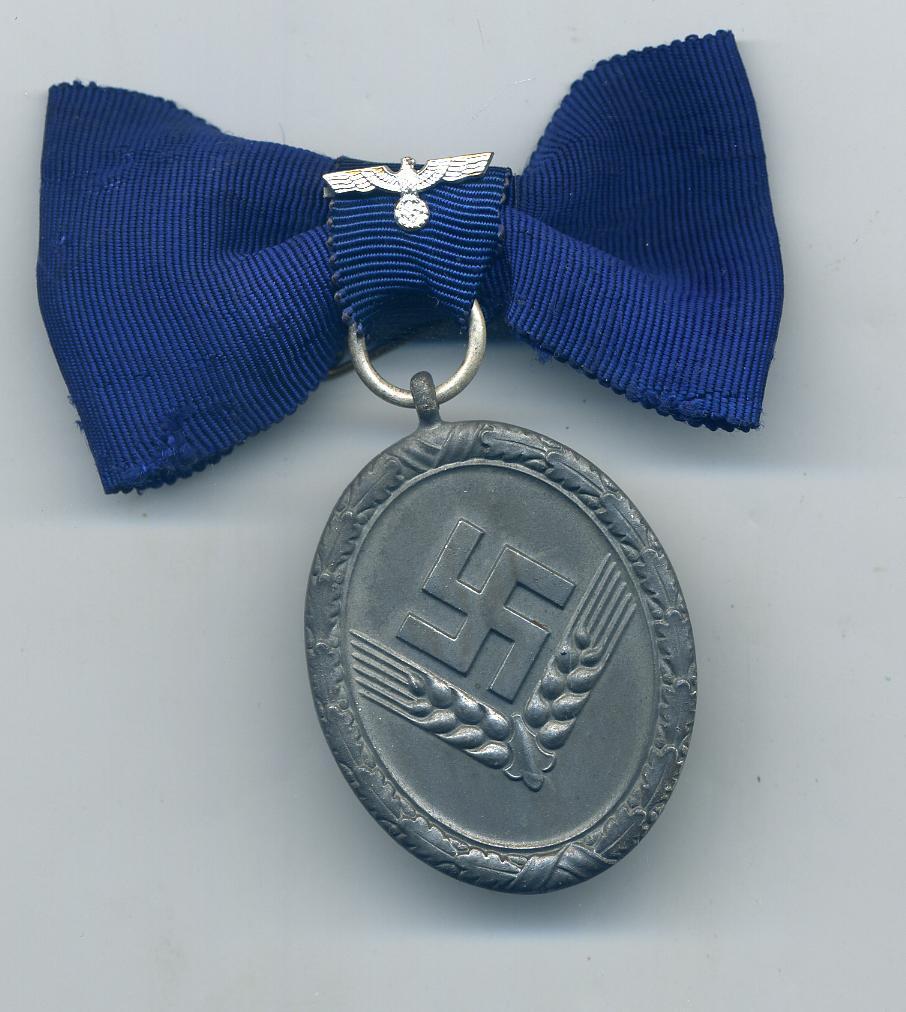 RAD Badges
The RAD cap badge follows the same design as the medal centres with an up-turned red-edged spade with a white centre and black swastika for men and a plain swastika and ears of corn within an oval wreath for the women. The mens’ cap badge is sometimes found in enamel and these are often maker marked.
The females in the RADwj also had a service and rank badges, that often turn up on the collector’s market. These awards are designed by Egon Jantke, who was also responsible for the RAD Long Service Awards, along with the Rad Hewer (dagger) and a lot of the Service insignia. These rank and service awards are round with, to the centre a swastika above the ears of corn and, around the edge,  a plain or raised border. These badges came in four colours of iron, bronze, silver and gold and then they are split into three by the edge border of either a plain, or a raised circle or a rope. These badges can often be found in iron and bronze, but are harder to find in silver and gold.  The next rank badge in the series is oval, with the swastika again to the centre and a stylised rope border. These awards are of silver zinc metal. 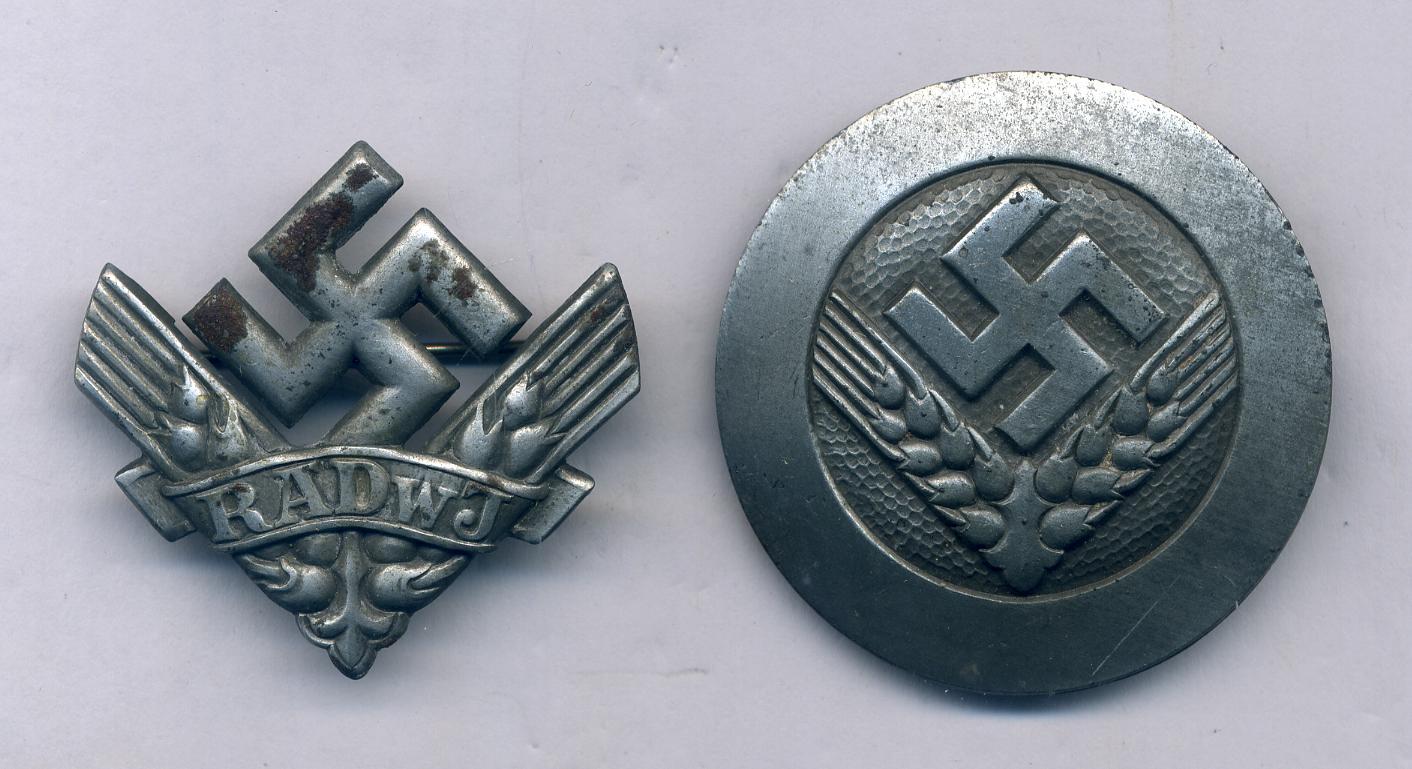 Other female RADwj badges are worth mentioning. The War Volunteer Service Badge is like the other service badges but has the swastika and ears of corn with a scroll along the base, along with the letters ‘RADwj’. This badge is quite common and can be found without too much difficulty, unlike the next two female RAD brooches which will take more searching. 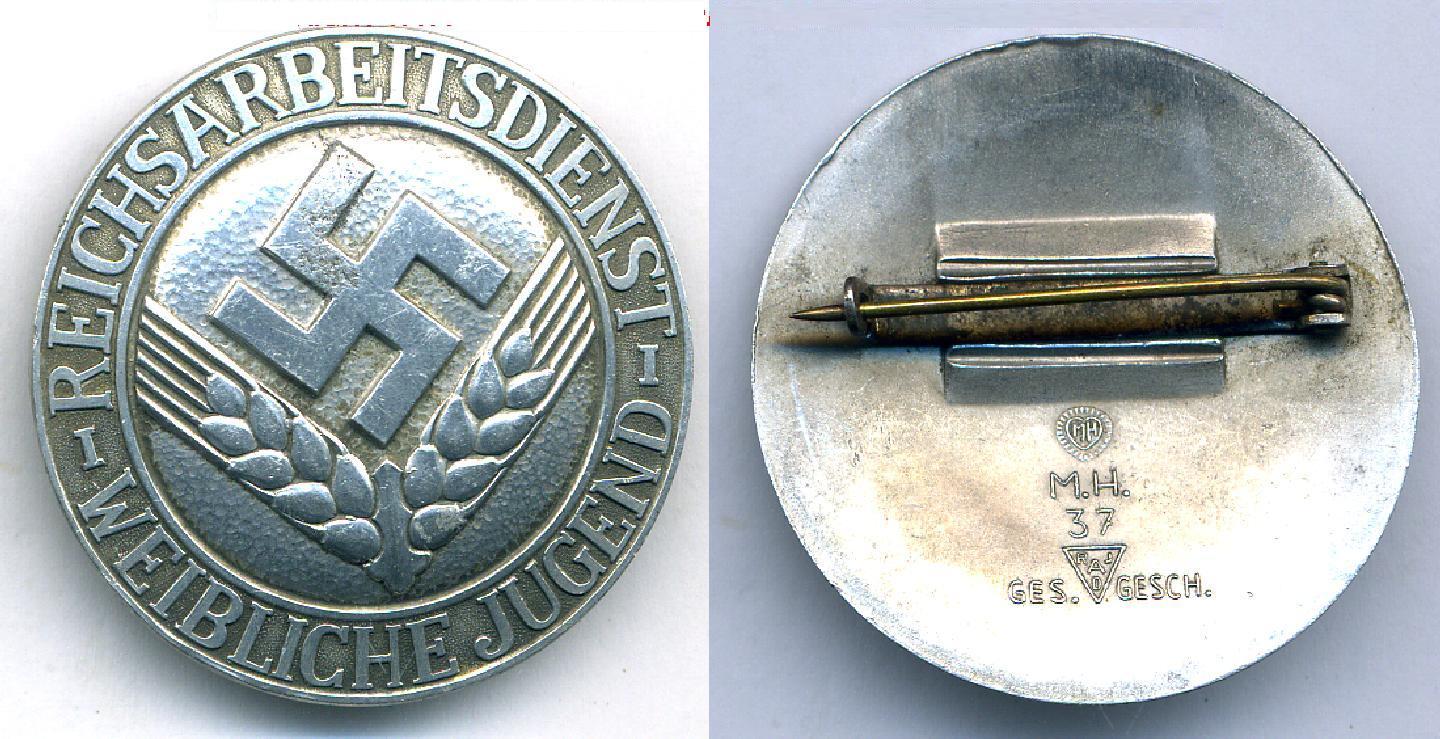 Right: Female service badge with the words, ‘Reichsarbeitsdienst – Weibliche Jugend’ around the outside

Both are again round and both have a swastika to the centre.  Around the edge in German is the wording ‘Work for our people work for ourselves German Womans Service’. This badge is often numbered. The other is also a round badge with the wording around the edge ‘REICHSARBEITSDIENST REIBLICHE JUGEND’ which was given for one year’s service. All these awards were worn at the throat.
As stated earlier, male and female members wore a uniform unique to the RAD, along with insignia. The men wore, on their sleeve, a down-turned spade with either a combination of letters, numbers or both, and the women also wore a shield with their emblem and either letters, numbers or both, on them.

Often worn on the Robin Hood caps by members of the RAD were unit tradition badges. These colourful badges can be found on the right side of many of the caps. Designs vary from unit to unit and most relate to the area that they came from. These badges being semi-official range in quality and construction.
Other occupied countries even copied the same structure as the German State Labour Service and, as such, you can sometimes find rare awards and badges that mirror these German counterparts. 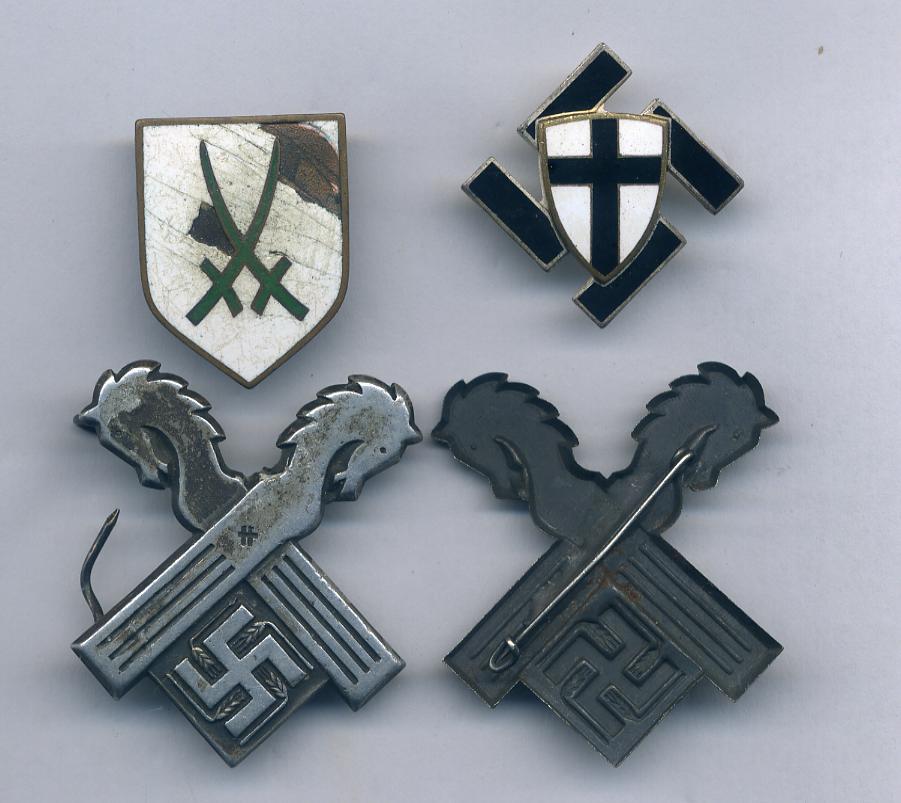 This is only a brief look at the German State Labour Service to give you a rough overview on the items of insignia and awards from this organisation. For an in depth study, the reader is invited to read Labour Organizations of the Third Reich by JR Angolia and David Littlejohn.