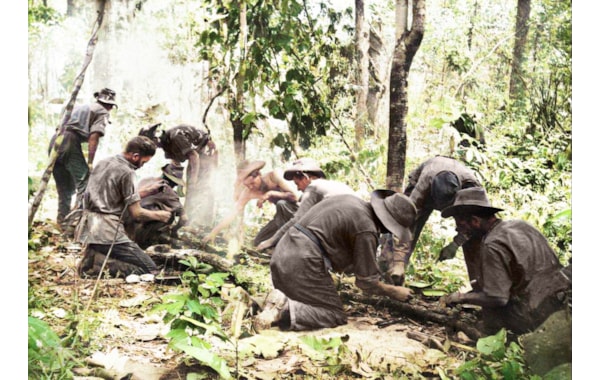 Chris Duffill explains how U.S. emergency food packs ended up with British and Indian troops in the jungles of Burma.

First introduced by the United States Army in World War II, the now infamous K-ration pack was a daily ration intended for mobile forces such as tank crews and airborne troops. Comprised of three individually boxed meals covering breakfast, lunch, and supper, the packs were small enough to fit into a soldier's pocket. Just two years following the initial development of the K-ration, their efficacy would be fully tested in active jungle warfare, not by U.S. troops but by a combined British and Indian force known as the Chindits. 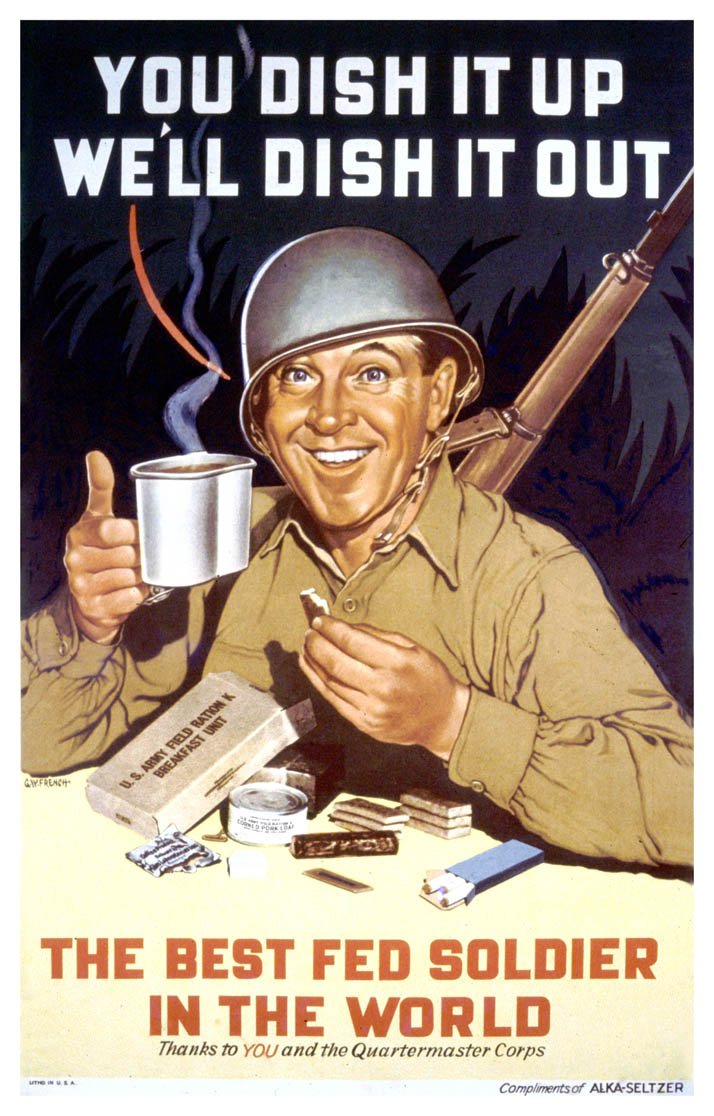 The story of the K-ration pack began in 1941 when Doctor Ancel Keys, a physiologist from the University of Minnesota, was asked by the U.S. War Department to come up with a non-perishable meal that could be used for short-durations. Due to their limited size and calorie content the resultant K-ration packs were essentially regarded as an emergency ration. On the face of it the 2,830-3,000 calories provided by the packs seemed reasonable for such a lightweight and portable food supply. However, U.S. troops who were first issued with these Type K provisions were supposed to use them for no more than 10-15 meals before replacing or supplementing them with the more rounded nutrition from A or B field rations.

The packs had been tested in the Panamanian jungle over just three days. Paratroopers alongside the Panama Jungle Test Platoon chose to march just 18km per day over flat terrain and accessible roads, each man carrying just one K-ration per day, their weapon, and other lightweight supplies. By the end of the three-day test the men were weighed and no significant weight-loss was recorded. The K-ration pack was deemed a success. 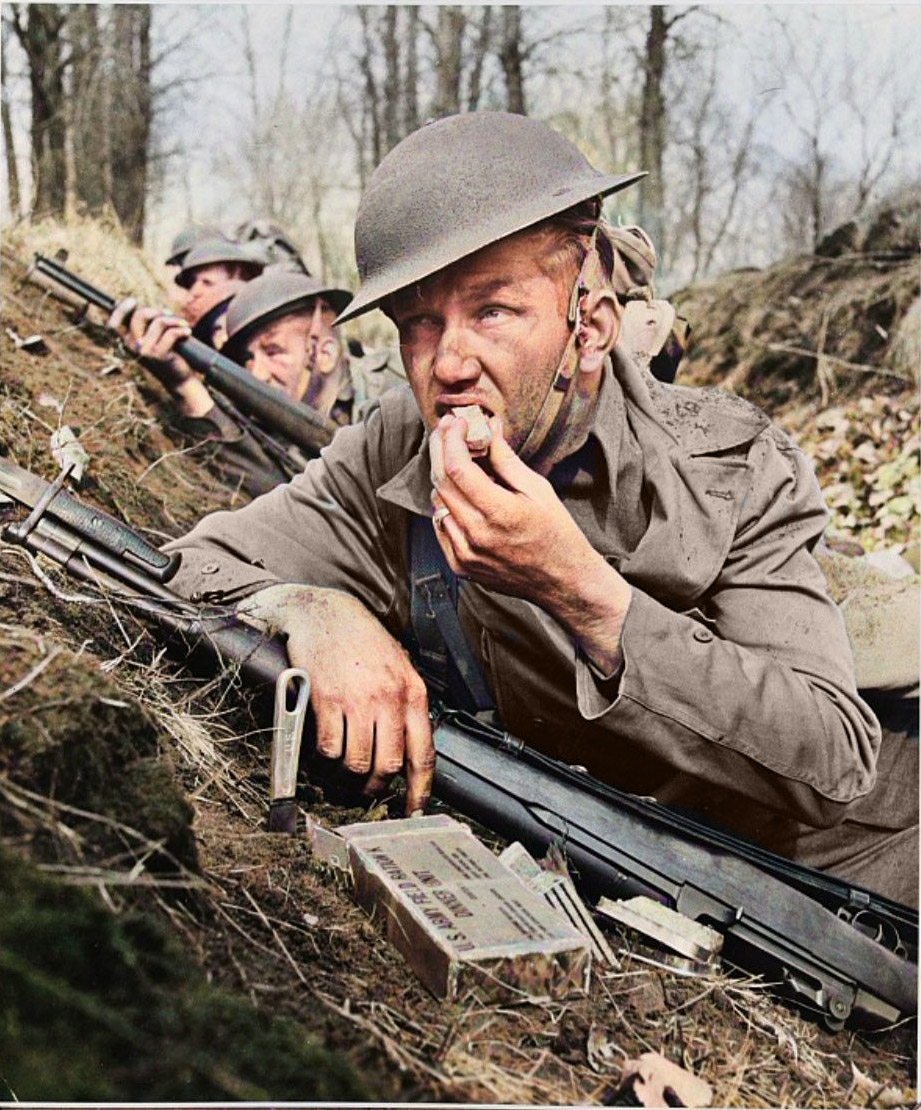 Despite being designed for short-use, officials in the Quartermaster Corps insisted that one K-ration per day was more than adequate as a complete field ration for each man on the front-line - a view bolstered by apparently successful field tests. This may have been the reason behind the British Army's decision to select the pack for use in the upcoming Burma Campaign. However, despite short and simplistic tests in Panama, its suitability for highly active troops in a challenging jungle terrain would prove to be ill-founded.

The Long Range Penetration Groups, or Chindits, were special operations units comprised of British and Indian armies put together by British Army Brigadier Orde Charles Wingate. He needed troops that could carry out raiding operations against the Japanese deep behind enemy lines. Marching for an extended period whilst negotiating rough terrain would be par for the course.

The first Operation in 1943, using 3,000 men issued with British and Indian ration packs, wasn’t particularly successful. The exhausted troops were beset by disease and ambushed by the Japanese. To make matters worse, the woefully-low calorie content of their ration packs only contributed to their weakened condition. By the end of April, Wingate had pulled the surviving Chindits out of Burma. Those who didn't make it home, a third of their original 3,000-strong force, were killed, taken prisoner, or had succumbed to disease. Those who survived were debilitated, having marched between 750-1,000 miles.

Wingate knew that poor quality rations had played a part in the Operation's difficulties; next time around things would be different, and so would the ration packs. He retrained more Chindits to make raids over much shorter distances, limiting the difficulties and exhaustion the troops would face due to the jungle terrain.

On 5 February 1944 the second operation commenced: Operation Thursday. Their mission was to cut the Japanese 18th Division's communications, aid Yunnan Chinese forces to enter Burma, and to generally inflict as much damage as possible along the way. This time the men were issued with the United States' K-rations. Aware of its designation as a short-use emergency pack that was supposedly adequate for front-line troops, it was deemed well-suited for the shorter distances travelled in the new raiding operations. Each man was allotted one three-meal ration per day. Having only been put through very light testing in a jungle environment, only time would tell whether the new provisions would actually sustain the new Chindit forces. 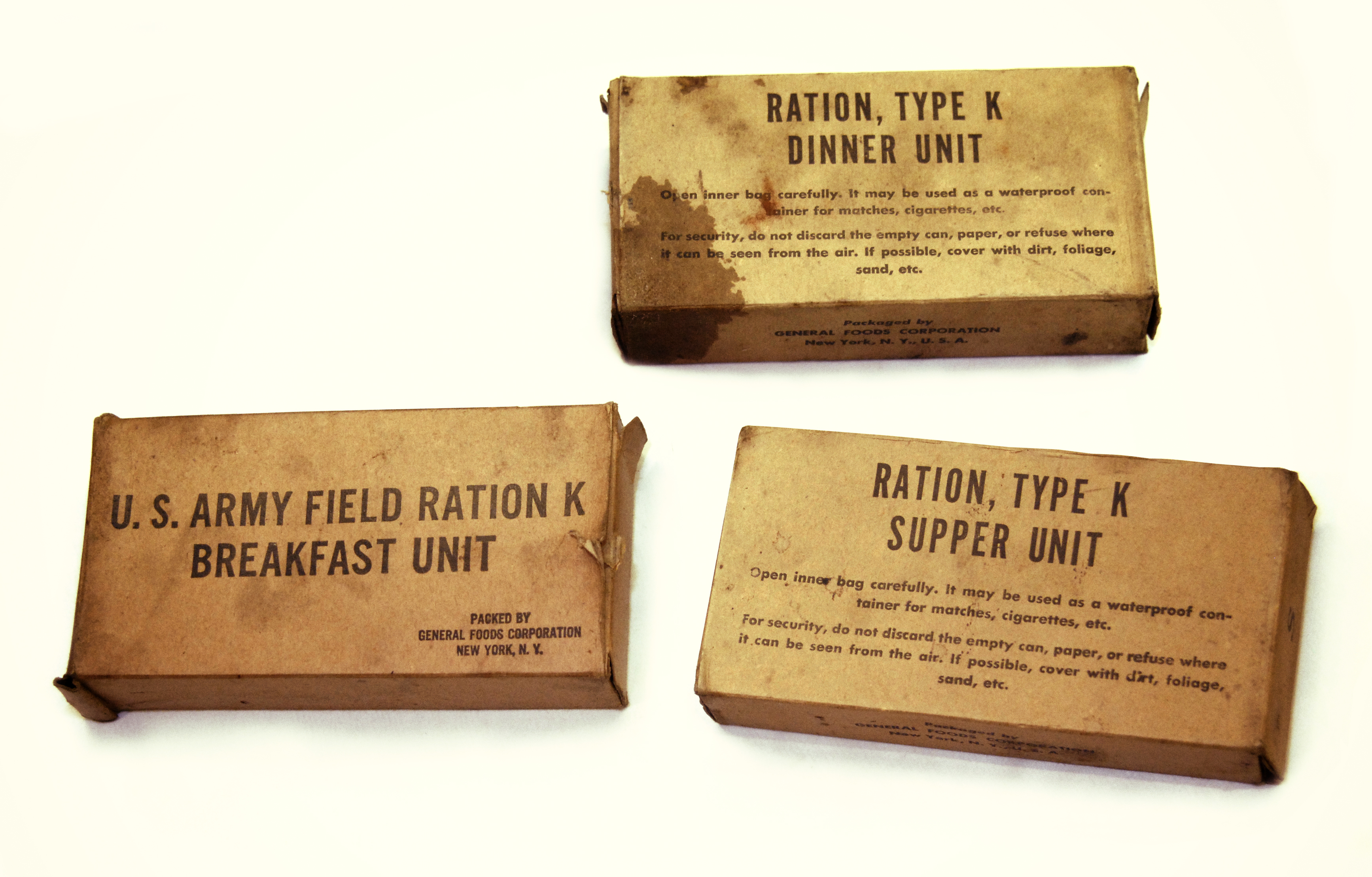 What’s in the box?
So, what was inside a K-ration? There were several versions of the pack, evolving from the 1941 prototype to Type I in 1942. The Type IIIa K-ration came in a tan-coloured cardboard box with the name of the meal – breakfast, dinner, or supper – printed in full on the front. By the start of Operation Thursday in 1944 the K-ration had gone through revisions to reach Type IIIb. During the course of the Operation (February-August 1944) there would also be a Type IVa. Issued from May 1944, it contained practically the same consumables as the Type IIIb in a newly designed set of colour-coded packaging. A tired and hungry Chindit soldier would sit down to:

Breakfast
A can of chopped ham and eggs, a dried fruit bar, some biscuits, sugar, and instant coffee. A packet of four cigarettes, several Halazone water purification tablets, some chewing gum, and toilet paper tissues.

Dinner
A can of processed American cheese, bacon and cheese, or Swiss and American cheese. Biscuits, five caramel candies, some sugar, and a salt packet. Four cigarettes and a book of matches. Also a packet of powdered drink (lemon or orange) and some chewing gum. 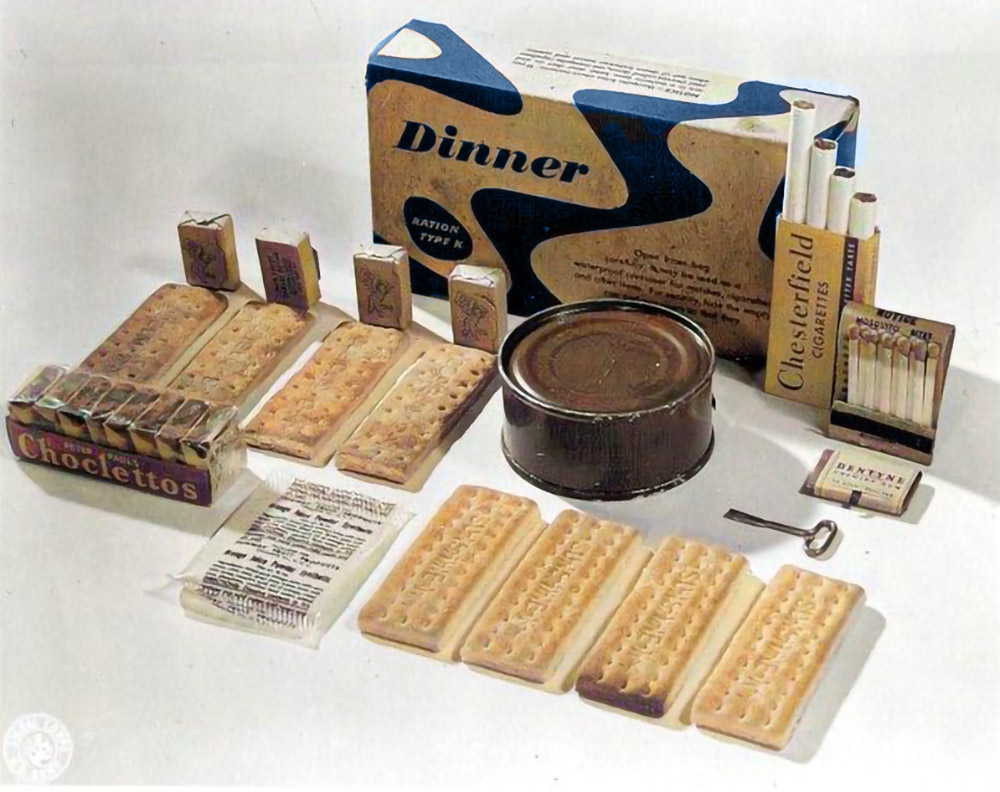 Supper
A can of beef and pork loaf, some biscuits, a 57g sweet chocolate bar and a packet of bouillon. Toilet paper tissues, four cigarettes, and some chewing gum. 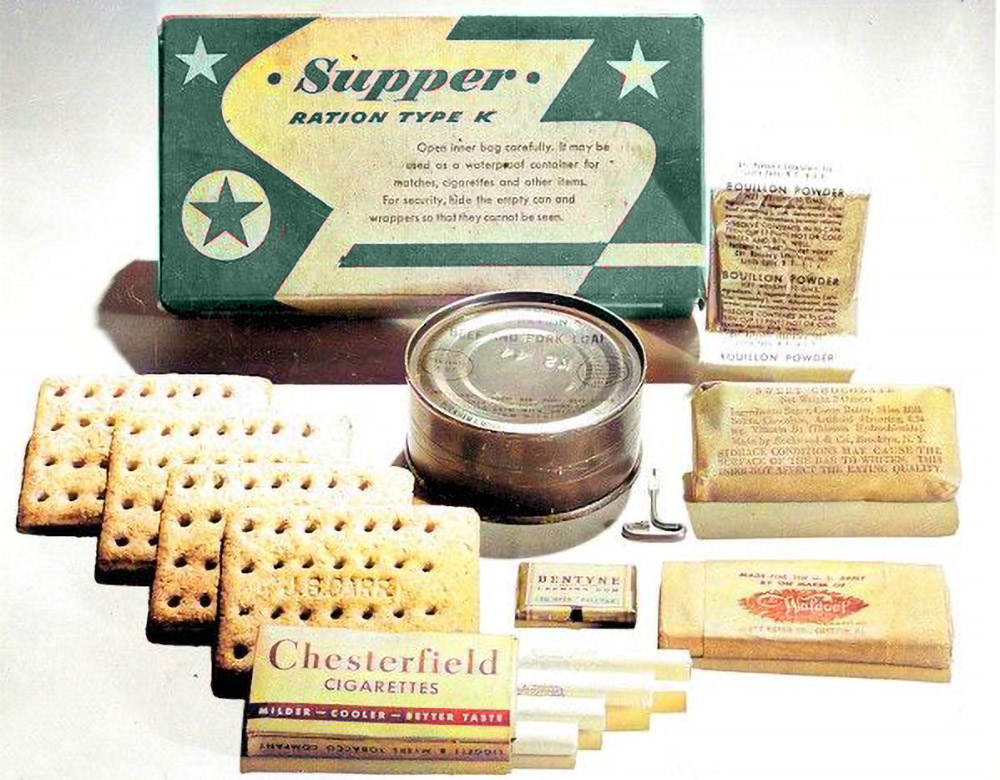 Whilst around 3,000 calories may sound reasonable for a front-line ration pack, the Chindits were not ordinary front-line troops and the shortcomings of the K-ration quickly became evident. Some of the men, such as Merrill's Marauders (a unit comprised of U.S. Army troops who coordinated with Wingate's Chindits) suffered extreme weight-loss and vitamin deficiencies due to 80% of their diet originating from K-rations. British men also lost between 30-70lb in weight and were prone to tropical diseases due to the poor vitamin content of the packs. Nutrition aside, the men generally found them unpalatable. It was even reported that one of Wingate's units, months after their last taste of K-rations, were given some more, two of the men vomited at the sight of the unopened box.

Wingate, realising the limitations of the K-ration, ordered airdrops of higher quality food and supplies to give the men some variety. However, the drops were often disrupted by military action on the ground or hampered by poor weather conditions, leaving the men to yet another day of processed cheese and powdered lemon drink. When the airdrops did succeed, the weary soldiers could look forward to jam, tea, rice, biscuits, bread, canned meat and more. But, this was the exception, and troops would buy food from the Burmese locals whenever they could. 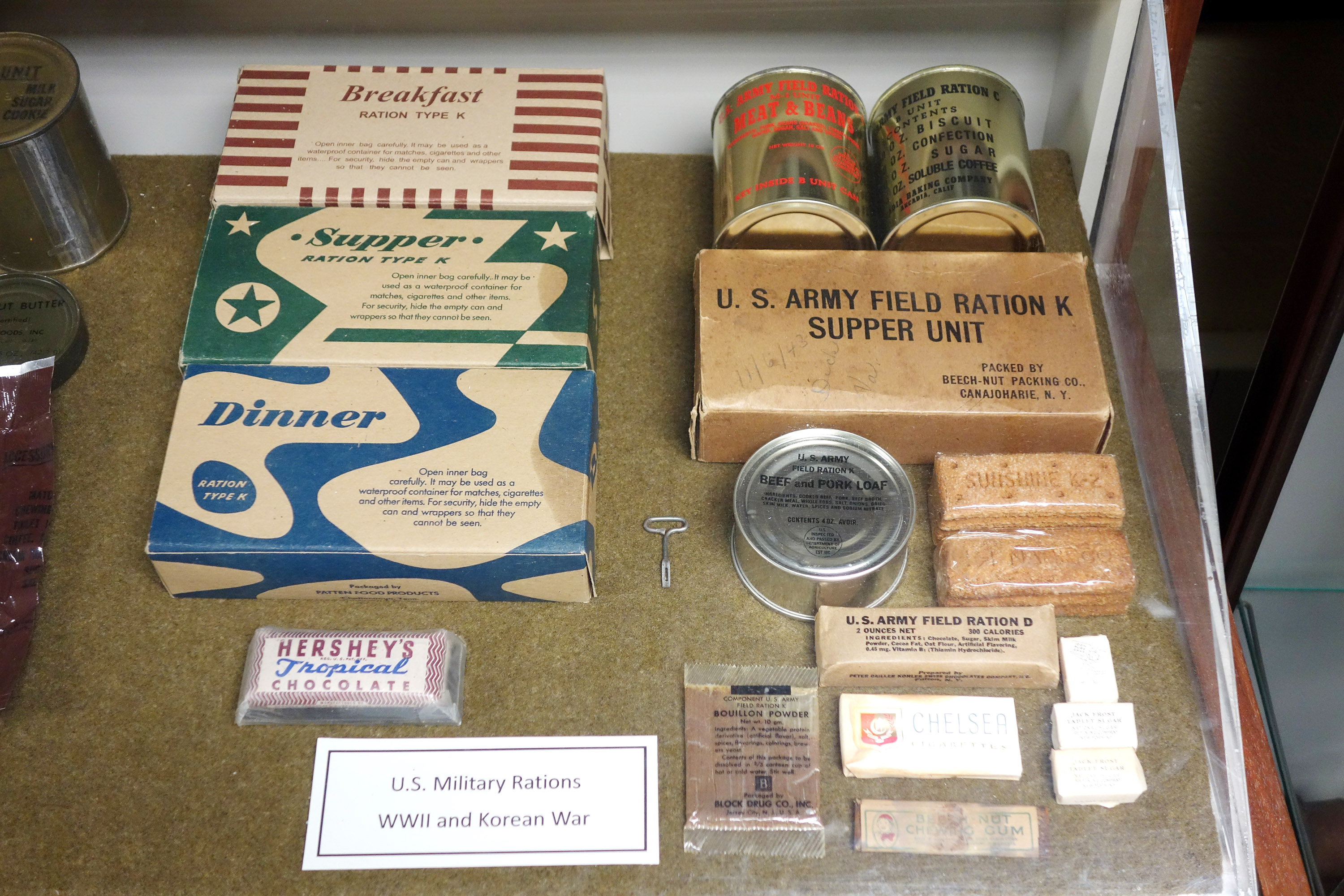 The last of the Chindits left Burma in August 1944 and Operation Thursday was finally over. They had spent almost five months living mainly on the low-bulk and poor-energy K-rations with only the occasional additional air-dropped food supplements - a gruelling achievement, given that previous field reports stated that it should not be eaten for more than around 10 days before switching to better rations.

Despite sustaining fewer casualties than Operation Longcloth, the Chindits suffered massive losses with over 1,300 killed and almost 2,500 injured. The rations, whilst better than those of the first Chindit raids in ‘43, were clearly a source of dismay and suffering to many. The K-ration itself was well designed as a short-use pack in emergency, but it was clearly not fit for purpose over an extended period in a physically challenging jungle environment such as Burma. Regardless of how military historians view the Chindit raids, the role of palatable calorie-dense rations in a theatre of operations is clearly paramount to the health and wellbeing of troops, and a determinant of mission success. 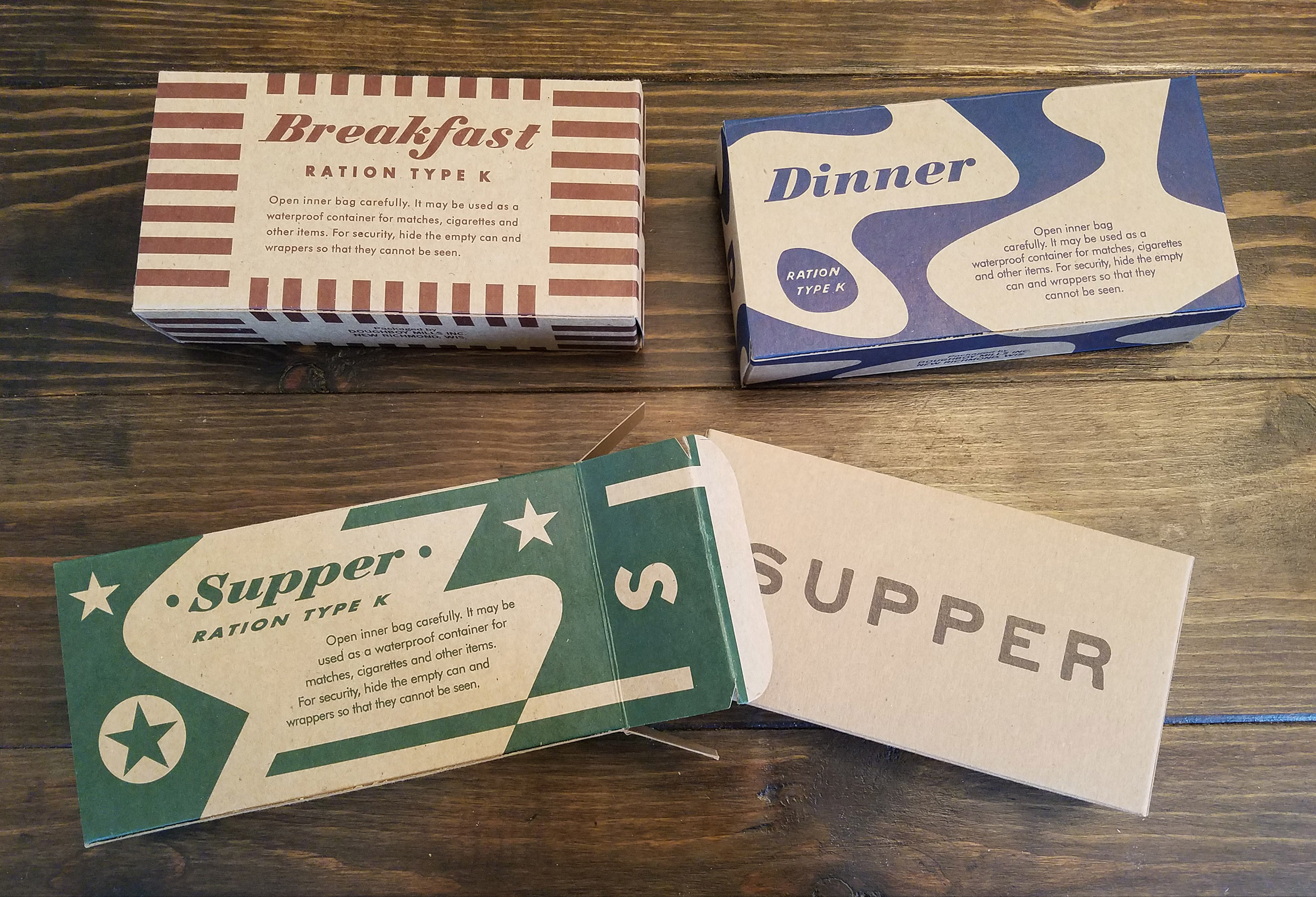 Collecting the K
Today, ration packs are much sought after by military re-enactment groups, military museums, and private collectors; and K-rations are no exception. As consumable items intended for front-line troops during wartime they are increasingly difficult to find, and when new stocks of old packs are unearthed they have often fallen to the ravages of time. Despite their non-perishable design, back in 1943-44, a surviving K-ration is often beset by rust, air-ingress, moisture and damaged packaging, not to mention perished foodstuffs.

Unopened K-rations in good condition have recently sold at auction for between £150-£260. However, collectors and re-enactors can find excellent packaging reproductions from places like www.kration.info, often priced at around £7-£15, and even authentic wooden crates from around £20-£30 from sources such as www.wwiiboxes.co.uk.

Finally, as a warning to the curious, those who do get their hands on an original K-ration may be tempted to discover for themselves how some of the contents have fared during the last 60 or so years. It goes without saying that eating anything this old is clearly a health risk and is not recommended; However, there is one person (known on YouTube as Steve1989MREInfo) who taste-tests old ration packs, under his doctor's advisement, to experience history first-hand. So, if you would like to know how a half-century-old biscuit tastes, it's probably best that you watch someone else eat a Chindit's breakfast.