Duncan Evans takes a look at a little known medal, issued for the first Gulf War.

When Iraqi T-72 tanks rolled into the tiny, neighbouring Gulf state of Kuwait on 2 August 1990 it set in motion events that would have repercussions for the wider world, even 30 years later. Iraq was in financial difficulties, after borrowing more than $14 billion to pursue a futile war again Iran, and saw the oil-rich kingdom as easy pickings. The two day invasion was followed by seven months of occupation as United Nations opposition solidified into a US-led military response. At 4am on 24 Feb, after numerous feints to give the impression of a seaborne landing, American M1 Abrams and M60 Patton tanks stormed into Kuwait. Some 650,000 military personnel were involved in the subsequent four days of fighting that saw outdated Iraqi tanks and armoured troop carriers destroyed at will by the American Abrams and British Challenger tanks. With the Iraqi forces surrendering en masse or fleeing back over the border, the liberation of Kuwait was complete and offensive operations were halted.

The British part of the conflict was known as Operation Granby and troops taking part were eligible for the Gulf War campaign medal, approved in 1992. However, on 16 July 1994, the Government of Kuwait also issued its own Wisam Al-Tahrir, or the Order of Liberation, to all coalition forces which took part in freeing the country. It came in five grades, with each one bearing slightly different implementations of the same elements. All feature, on the obverse, the traditional dhow, representing Kuwait as a nation of seafarers and ship builders; and the outstretched wings of the falcon, representing the sport of king in the Persian Gulf and symbolising Kuwaiti prowess. On the reverse is the map outline of the Kuwait borders.

The ribbon follows the flag of Kuwait and features equal stripes (11.5mm), from left to right, of red (signifying the blood of enemies), white (signifying deeds) and green (meadows), with a trapezoid over the top in black (for battlefields). 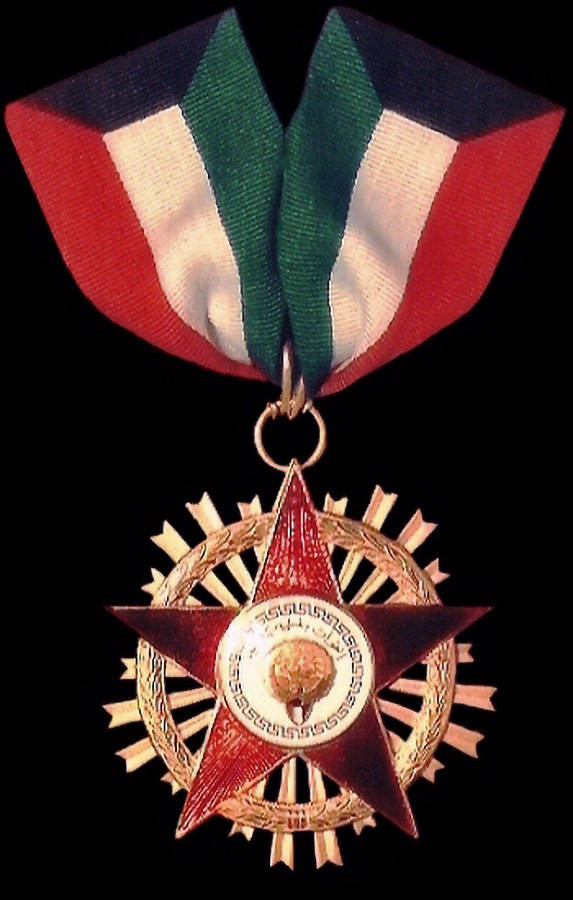 The Excellent Grade, or first class, medal was only issued to the most senior Coalition commanders. This is to be worn at the neck, unlike the others which are breast-worn. It features a five point star in red enamel, a circle of laurel wreaths, cut out radiating spokes at the back and a central dias with the dhow and falcon on. It’s suspended by a ring. 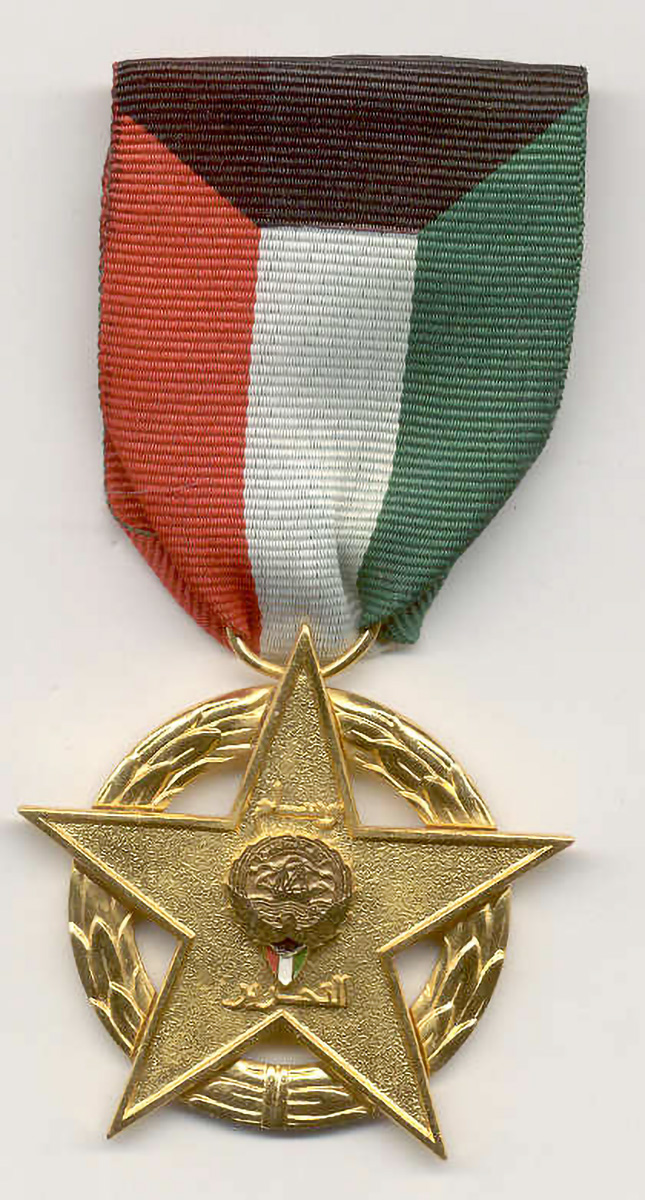 erlaying a thicker laurel wreath but the central emblem is smaller than the lower classes. It has a tiny enamel badge in the colours of Kuwait. It’s all in gilt and also has a ring suspension. The reverse is quite plain, simply featuring the map outline in the middle with the date. It was issued to Brigadiers and Major-Generals. 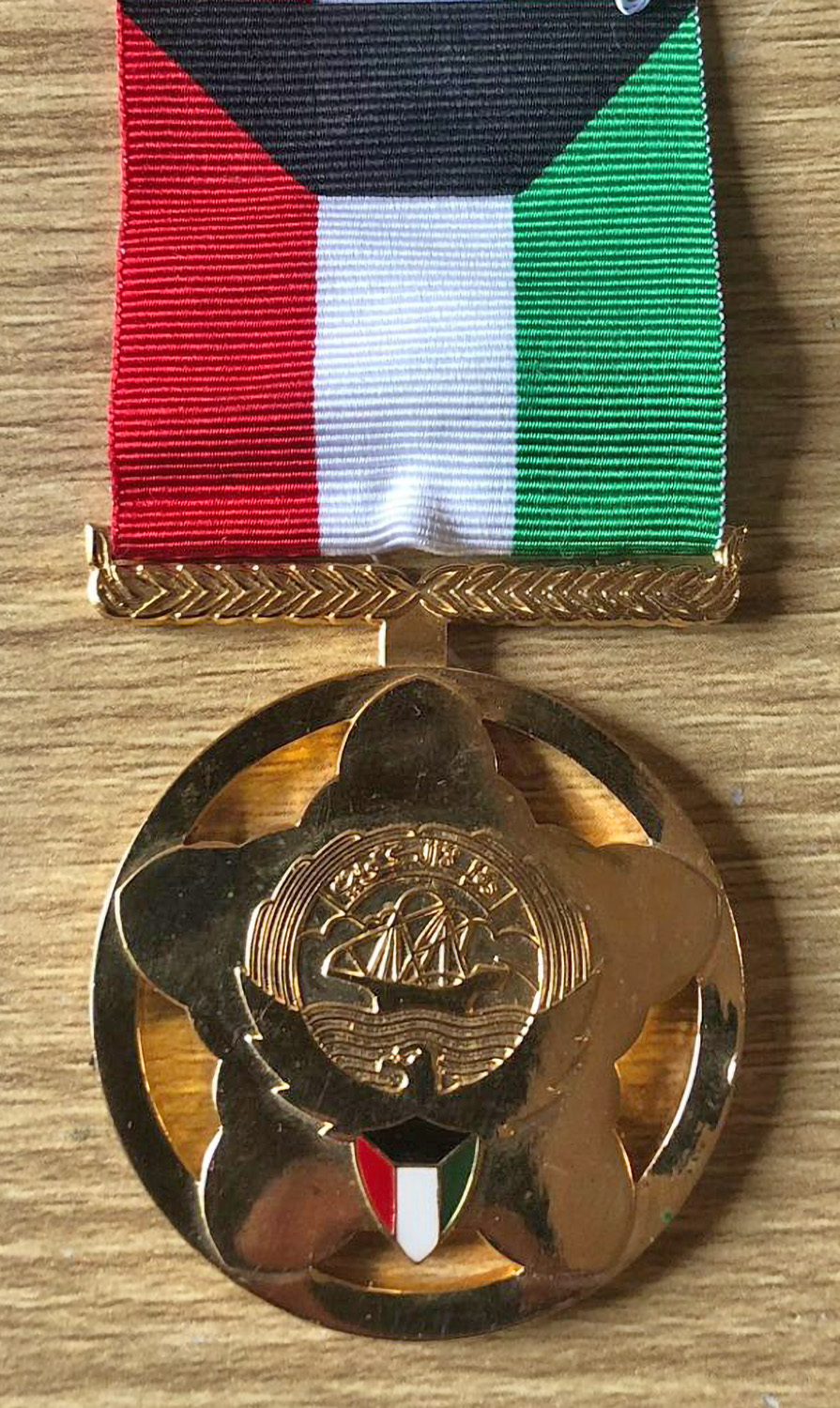 The Second Grade, or third class, went to Colonels and Majors varies in that it is made from a bright gilt metal, the arms of the star are rounded rather than points, the falcon has large wings and now there’s an enamel shield in the colours of Kuwait at the bottom. On the reverse, instead of the rayed background the map sits on the star shape. This medal and the next two have a suspension bar, this one fixed to the medal by a short, vertical strip.

The Third Grade, or fourth class, or was awarded to junior officers such as Captains, Lieutenants and equivalent ranks in other services. The medal here is quite different looking in that it’s made from a dull grey metal, suspended from a bar engraved with laurel leaves. On the obverse is a five pointed star, surrounded by rays, with the central falcon and dhow in a circle. This is now completely solid with no cut out element. The enamelled coat of arms is smaller. On the reverse the rayed background has been removed. 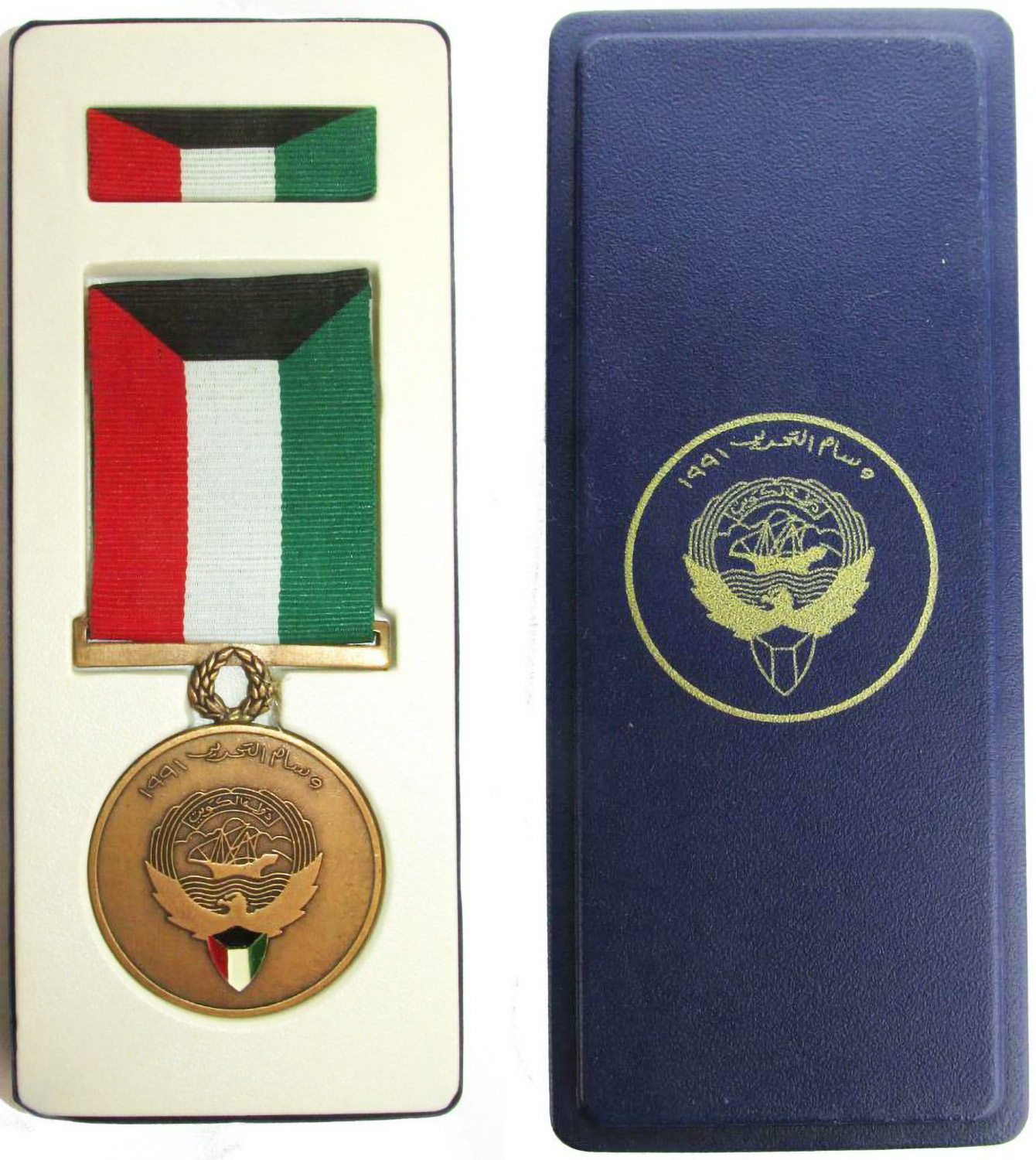 The Fourth Grade/fifth class, is an attractive, solid bronze medal, which doesn’t have a star on the obverse at all and is suspended from a ribbon bar by a wreath. The dhow and falcon sit in the middle with a large shield at the bottom. At the top is Arabic lettering translated as ‘1991 LIBERATION MEDAL’. On the reverse the map is surrounded by rays. Of all the medals issued, this is by far the most common and you’ll find examples on eBay and at dealers with ease. The Second Grade/third class and Third Grade/fourth class are also fairly easy to come across but the first two classes are very rare. Also be aware that due to how they were graded, you’ll often find them referred to by the wrong class.

Because the British Government had already issued the Gulf War campaign medal, British personnel were allowed to accept the medal as a keepsake, but permission to wear it has so far been refused. The Canadian and Australian Governments followed suit but the French Government both accepted the award and has allowed it to be worn in uniform. The USA only accepted the Fourth Grade/fifth class.