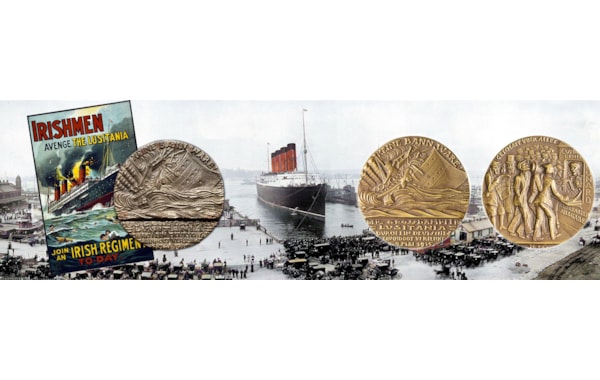 Duncan Evans looks at the curious case of a medal used by both sides in a naval atrocity.

Propaganda in wartime is often used to encourage recruits to join the armed forces, to firm up support at home and to demonise the enemy. However, it’s a rare occurrence where two opposing sides try to make capital out of the same event. That happened in 1915 when the German U-20 submarine torpedoed and sank the Cunard Line passenger cruiser, the RMS Lusitania, just off the coast of Ireland, resulting in the deaths of 1,198 passengers and crew. 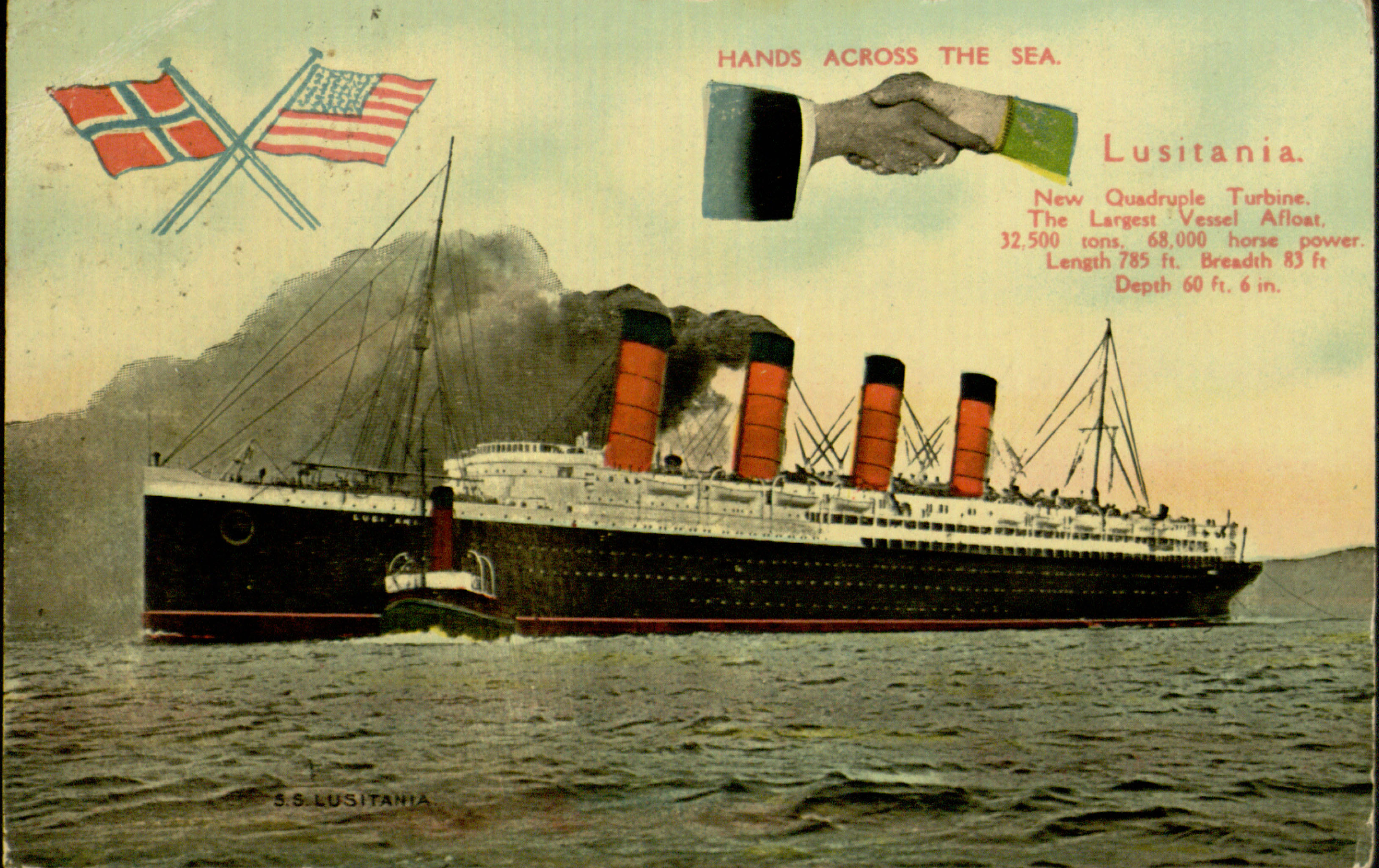 It all started when the Royal Navy blockaded Germany at the start of WWI. In response Germany declared the seas around Britain a war zone. At the time, the Lusitania and sister ship Mauretania were the most luxurious and fastest passenger cruise liners, plying the lucrative transatlantic route. The Imperial German Embassy in the USA placed newspaper adverts, warning anyone travelling on it that they were putting their life at risk. The Lusitania was officially listed as an auxiliary war ship and the manifest showed 750 tons of rifle/MG ammunition as well as artillery shells and explosive powder, which made it fair game, according to the Germans. 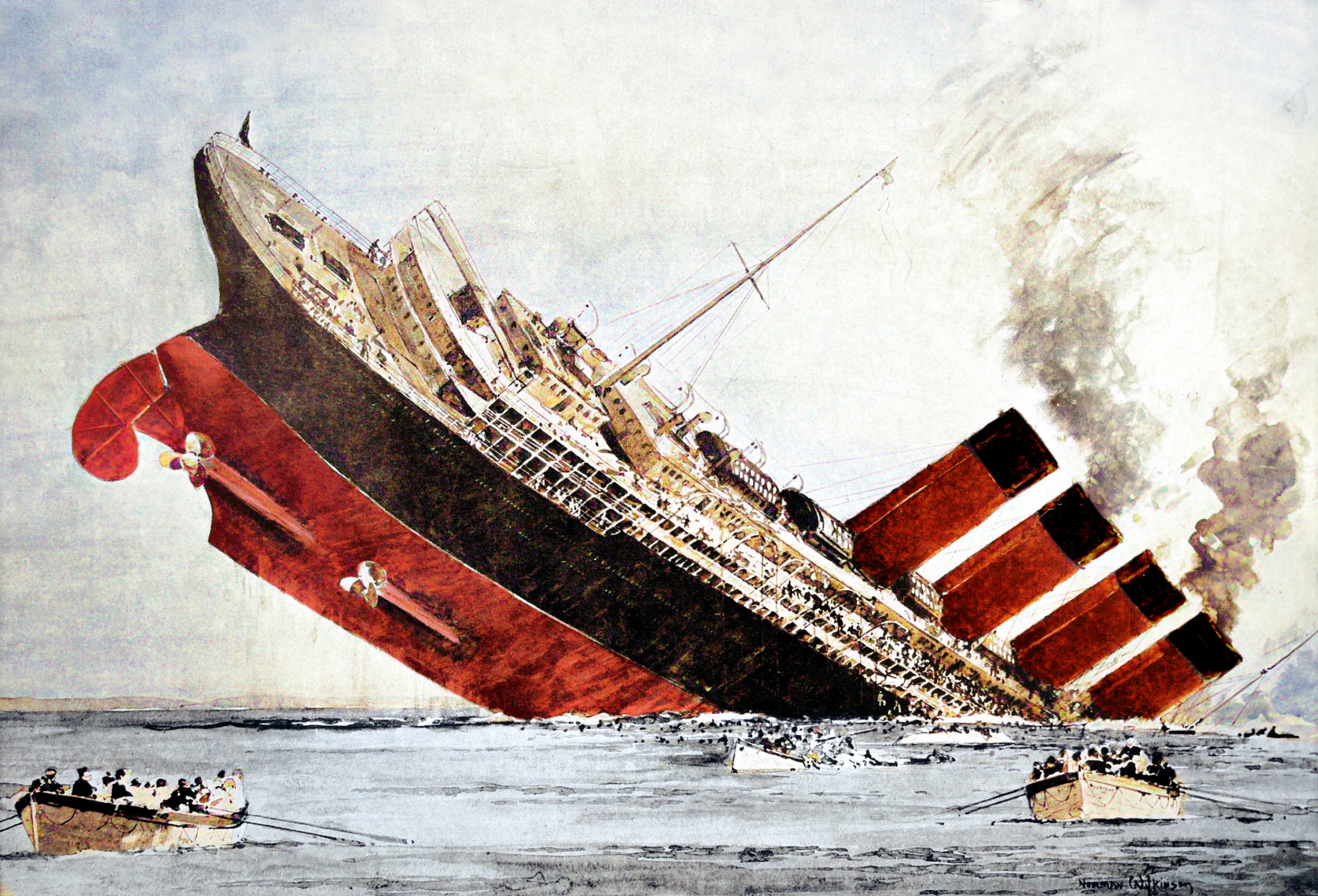 The liner left New York with 1,962 passengers and crew, on 1 May, regardless, and, sure enough, on 7 May, was torpedoed in the starboard bow. A second explosion in the same area followed, causing the ship to list alarmingly, preventing the deployment of many of the lifeboats. In just 18 minutes the huge ship had sunk beneath waves with most fatalities being caused by drowning and hypothermia. Among the dead were 128 Americans, which helped fuel an international outcry. However, that was just the start…

The German medal
The feeling in Germany was that the Lusitania was a legitimate target and that the triumph of the German Navy in sinking such a huge ship should be commemorated. And so, artist Karl Goetz created the large (56mm diameter), and astonishingly morbid, if satirical, Lusitania medal. This was a private endeavour, with 500 medals produced, which is why it is so rare and consequently, valuable. 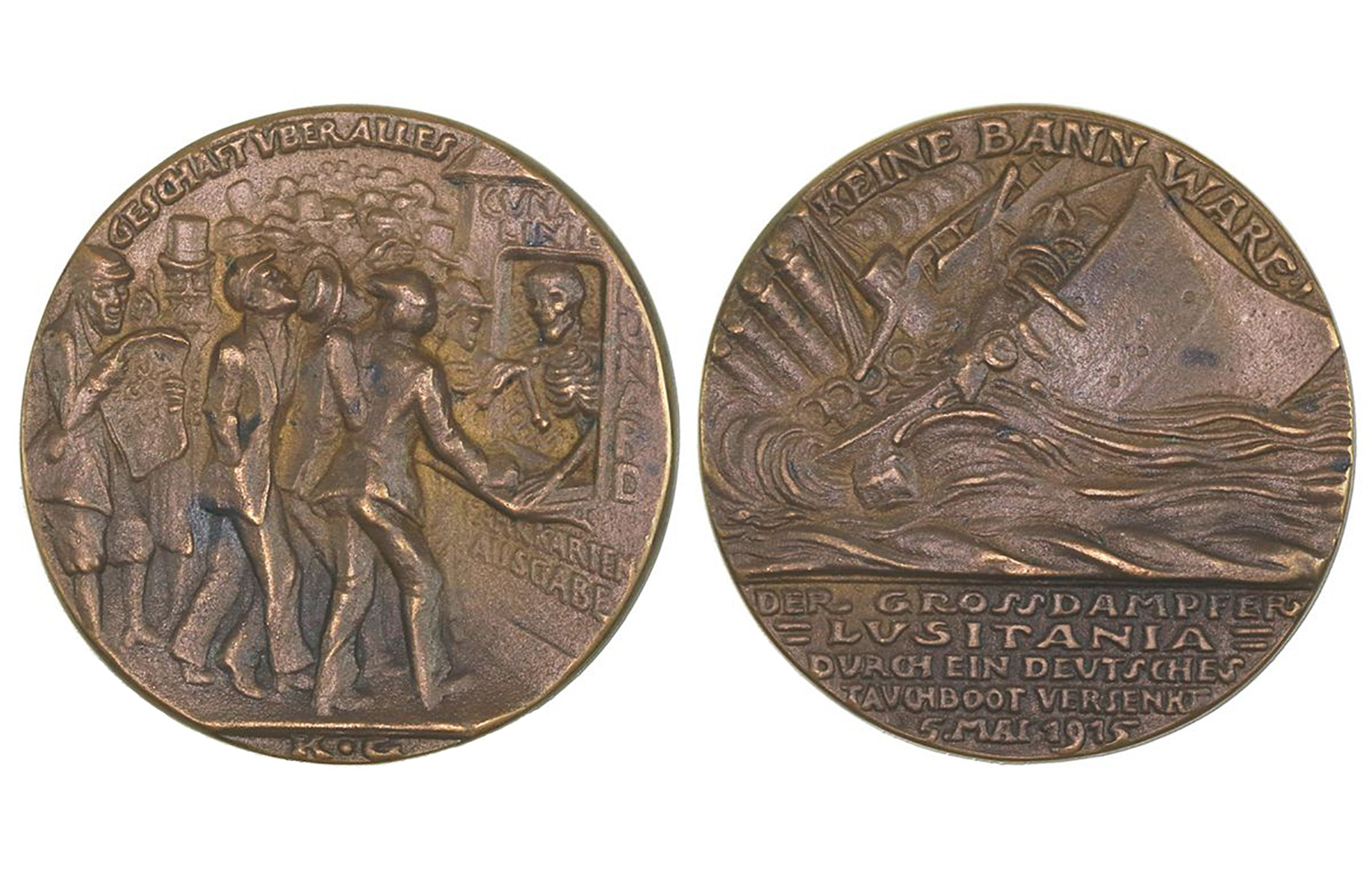 There are two versions of the original, German Lusitania medal. On the first version, the obverse features the Lusitania sinking beneath the waves with war materiel on the deck. Above this are the words, ‘KEINE BANN WARE!’, translated as ‘NO CONTRABAND GOODS!’ At the bottom of the medal is the date, ‘5 MAI 1915’. Of course, the ship was sunk on 7 May, which led many to speculate on the German pre-meditated intention to sink the passenger ship. It was, however, a mistake, which Goetz attributed to an error in a newspaper account. The second version of the German medal carries the wording, ‘7 MAI 1915’ to correct it. 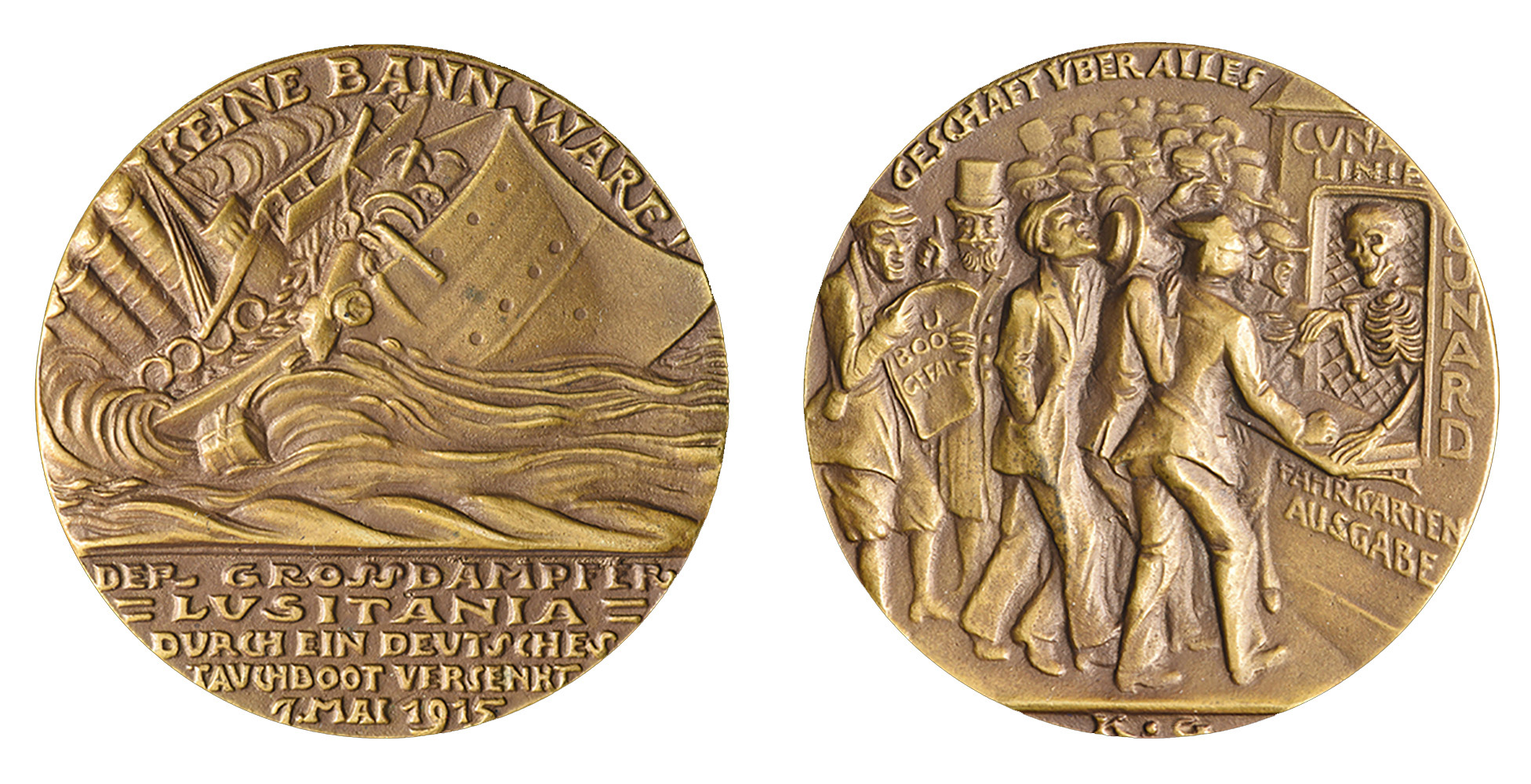 On the reverse you can see a skeleton representing death, selling tickets from the Cunard office, to queuing passengers. A man stands in the crowd, reading a newspaper whose headline is, ‘U-Boat Danger’. The words, ‘GESCHÄFT ÜBER ALLES’, translated as, ‘BUSINESS ABOVE ALL’ hammer home the message.
While most of the castings were in bronze, Goetz also used iron as well, so a genuine German version, which are the valuable ones, can be made of either.
Unlike the British ones, which are made of iron. The other identifier for the German version is that some of them, but not all, have ‘GOETZ’ stamped on the rim. The detail on the first version is slightly better than some pressings of the British version, but the second version is, clearly, much more detailed.

Which brings us on to the British response to the German medal. In 1916, the Foreign Office discovered the German medal and was duly incensed that one had been issued to commemorate the killing of civilians. So, ignoring that there was war materiel onboard, the government authorised the London department store Selfridges to create 250,000 copies of the same medal, with proceeds aiding St. Dunstan’s blind veterans charity (now known as Blind Veterans UK). It was cast from iron and issued with a box and certificate that clearly condemned the German action. It was designed to emphasise the callousness of the enemy. These are the most common versions of the medal and can have the date spelt as either ‘5 MAY 1915’ or ‘5 MAI 1915’ although the former is more common. These don’t have ‘GOETZ’ on the rim. 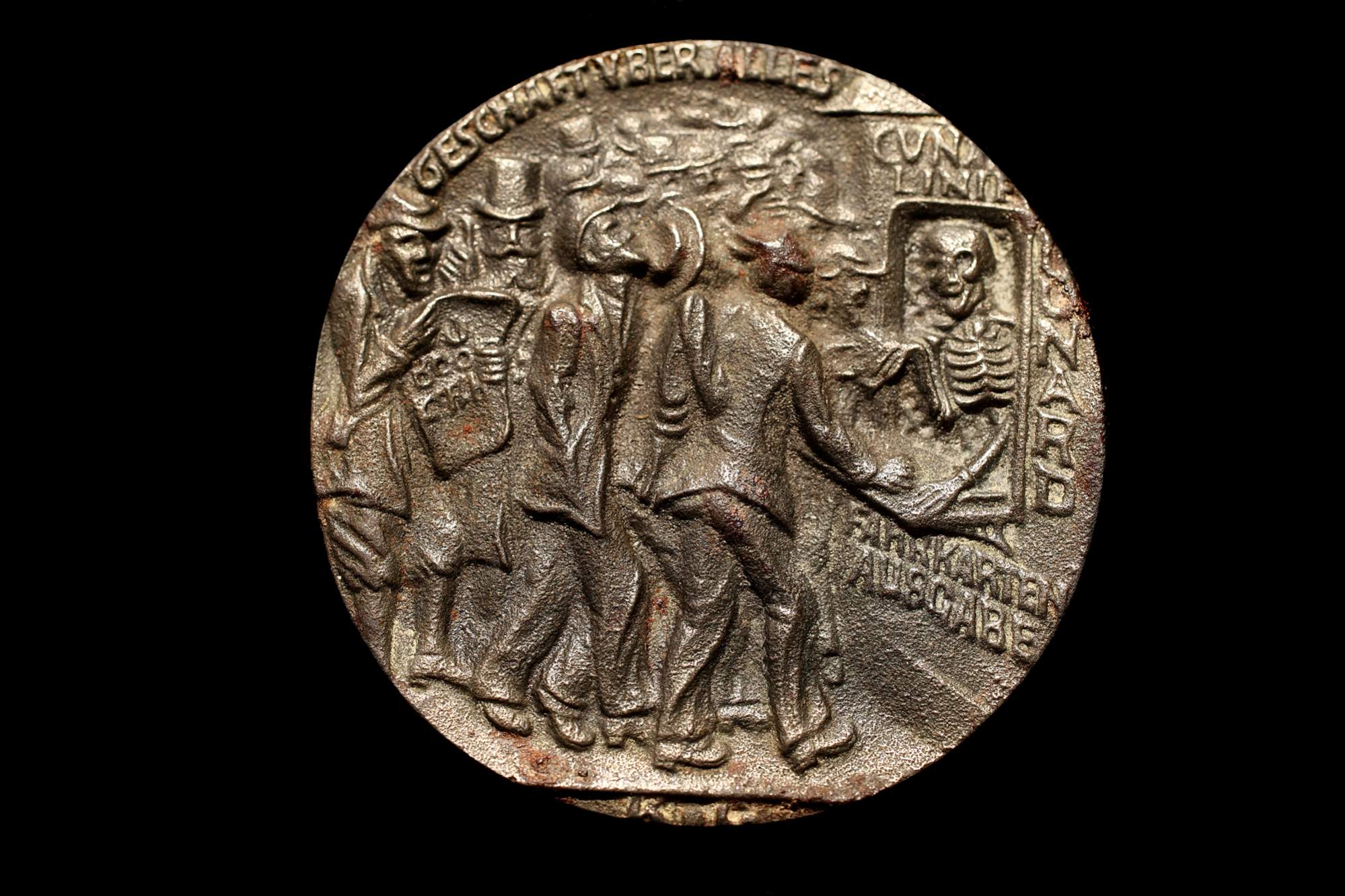 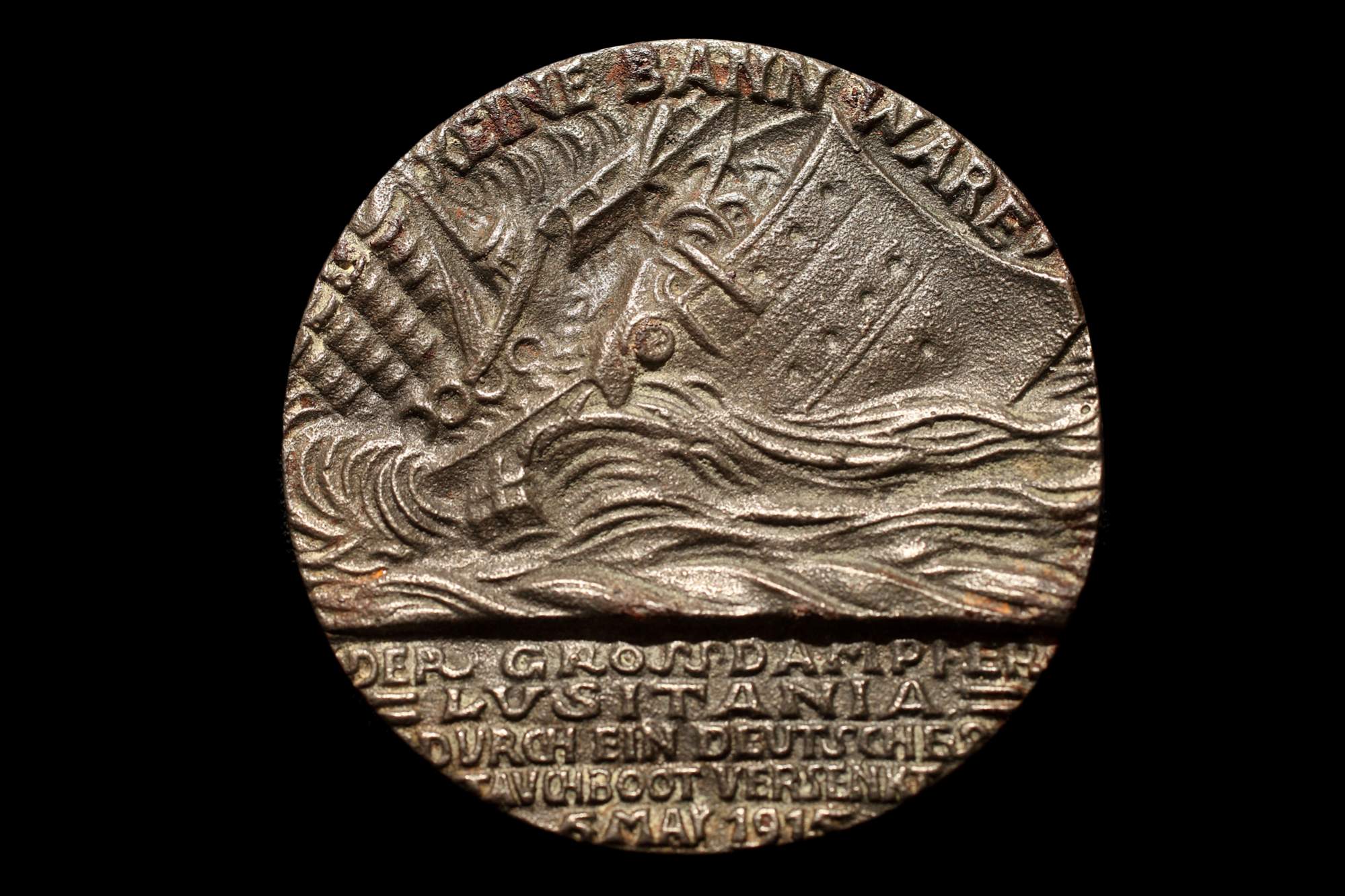 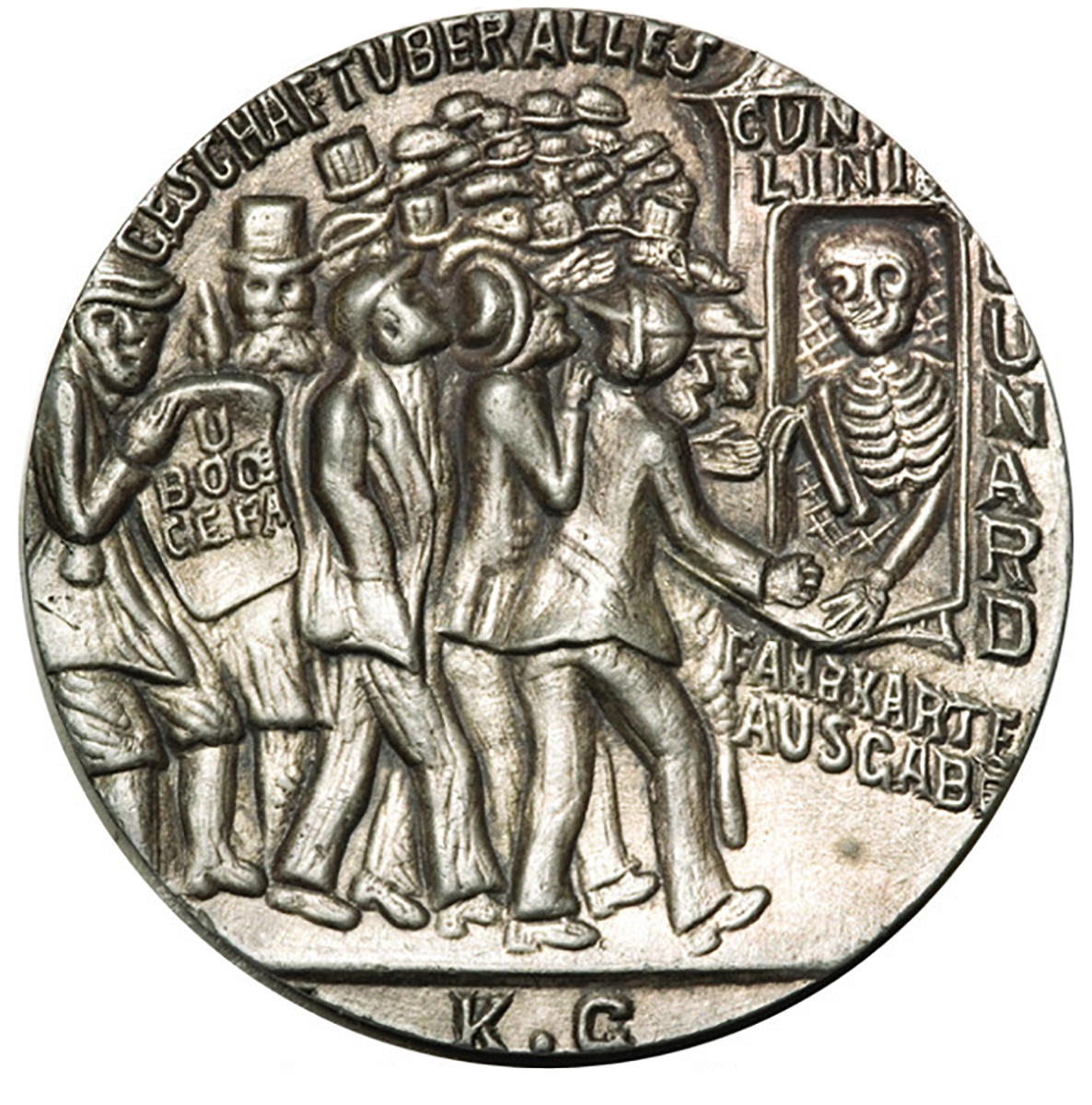 this wasn’t enough, there is also the American response. Gustav Sandstrom and Clarence Mahood of Pennsylvania produced their own version of the medal. On the obverse the main inscription isn’t as neat as the other versions, although it still carries the date as ‘5 MAI 1915’. The biggest difference is on the back, where the skeletal figure has a face more like a pumpkin, making it clearly identifiable. They were sold with Sandstrom and Mahood’s version of the box and propaganda leaflet. These are rarer than the British version.

There are also reputed to be Japanese copies in bronze and silver, as well as counterfeit and museum reproductions, which have very poor detail.

Medal values
These are the approximate values of the different versions of the medal. Examples of the original German version are extremely rare and when they do come up for sale it will be through reputable auction houses, not eBay. A German version sold at a Bonhams auction in 2015 for £535. Also note that the British version can sell for a lot more on American auction websites – an example sold in February 2018 for an astonishing $280.