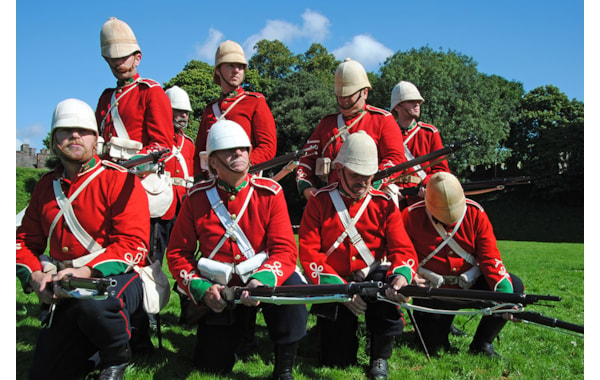 John Norris takes a look at the weapon that was instrumental in defending an empire.

During the 1860s, several European armies, including the British Army, began to equip their troops with modern breech-loading rifles, which were much better than the old-fashioned muzzle-loading musket types. The Prussian Army introduced a bolt-action rifle known as Zundnadelgewehr Needle Gun, while the French pressed the 11mm calibre Chassepot Modèle 1866 into service. The British Army adopted the .577in calibre Snider Enfield rifle, designed by the American-born Jacob Snider, as its first breech-loading rifle, which entered service in 1867. It did not prove entirely satisfactory and five years later it was augmented in service when the .455in calibre Martini-Henry, with an overall length of 49.5in, was adopted into service in 1871. 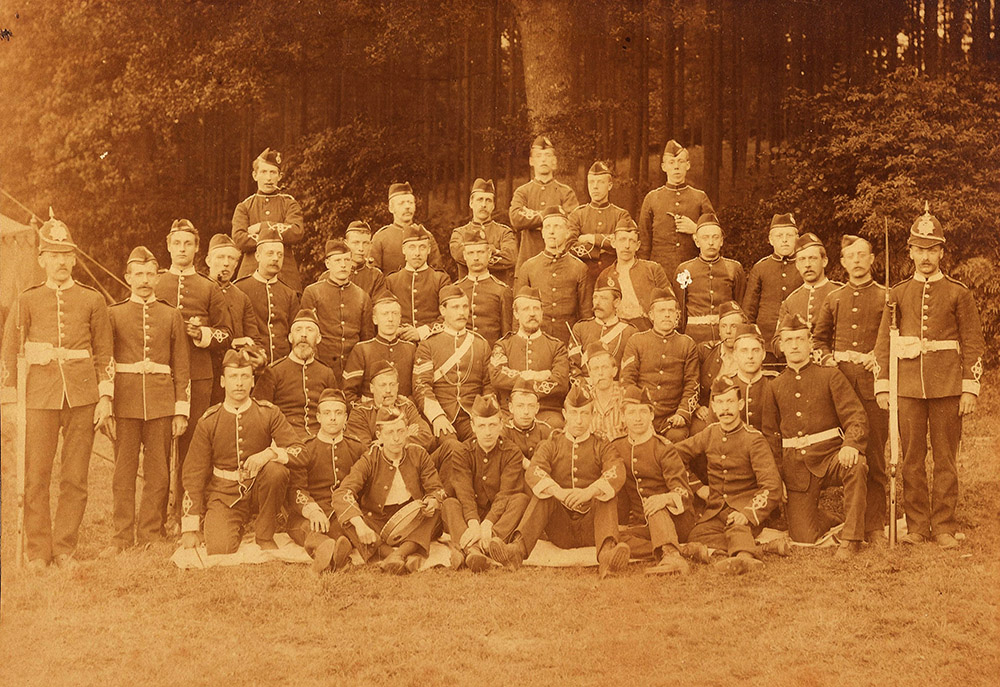 The new weapon was a combination of a barrel designed by Scottish gunsmith Alexander Henry, and the action designed by Austrian Friedrich von Martini. The two men had been collaborating since 1866 before submitting prototypes of their new rifle for consideration by the army between 1867 and 1869. In 1871, the Secretary of State for War, Lord Cardwell, introduced a series of reforms for the Army and it was on his advice that the Martini-Henry rifle was introduced into service.
The first model of the new rifle was the Mk.1 Martini-Henry, issued to British troops in 1871, and by 1874 it was in general service. The action of the weapon was not entirely new; it was based on a design known as the falling block, which had been developed by an American gun designer called Henry Peabody. The style of mechanism was hinged high at the rear and operated by a lever which made the breech-block fall, thereby opening the chamber to allow a single round to be loaded. The lever action of the rifle was under the butt-stock and behind the trigger guard. With the Peabody design, an external hammer struck the firing pin, but with the Martini-Henry design the action was modified so that the hammer was internal and cocked in readiness to fire when the lever was operated. 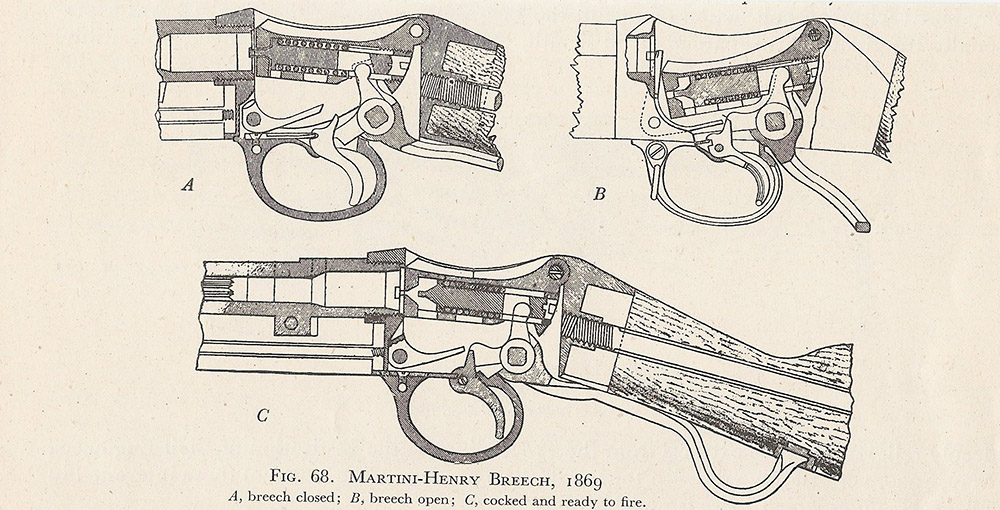 The cartridge was fired by the striker being driven forward by a strong spring, located within the breech-block. After firing, the lever was pushed down, causing the front of the block to drop, which in turn struck the lower arm of the extractor and ejected the spent case. A new round was inserted and as the lever was pushed up, it closed the action and chambered the round and compressed the mainspring. It was a simple action but prone to stoppages due to the ingress of grit, particularly during campaigns such as Egypt in 1882.
The barrel of the standard Martini-Henry rifle was 33in in length and chambered to take rounds of 577/450 calibre. This was a bottle-necked cartridge which had the calibre at the base the same as the earlier .577 Snider-Enfield rifle, but with a bullet head in the calibre of .450in. The cartridge case contained 85 grains of black powder and the complete round, with its paper-patched head, weighed 480 grains. The early cartridge cases were made using a process which produced a rolled or coiled brass case. As manufacturing methods improved, a more robust drawn brass case was developed. On being fired the .450in cartridge would typically achieve a muzzle velocity of some 1350fps. A carbine version, with a shorter barrel length of 21in firing a shorter cartridge with a lighter powder load, was produced for the cavalry. This version, known as the Mk 1 Cavalry Carbine, measured 37.7in overall and was also used by the artillery.
The Canadian Government purchased around 2,100 Martini-Henry rifles in 1874 which were placed in storage in Montreal. When the North-West Rebellion erupted in 1885, the rifles were issued to the militia. An order for a further 5,000 Martini-Henry rifles was placed and some of these weapons were issued to the North-West Mounted Police, later to become the Royal Canadian Mounted Police. The rifle version, rather than the carbine which was better suited to mounted troops, was never used by the North West Mounted Police.

The Martini-Henry rifle would be used in all the major campaigns of the British Army and, despite its shortcomings, gained a reputation among the troops for its accuracy over long range. For example, during the Kaffir Campaign or ninth Xhosa War, 1877-78, General Sir Arthur Cunningham KCB recorded an incident he witnessed, writing how: ‘All of them [rifles] were eclipsed at the Waterkloopf when the Sergeant-Instructor of Musketry of the 90th Perthshire Light Infantry killed a Kaffir by deliberate aim at 1,800 yards distance.’ Of all the campaigns where it was used, the Martini-Henry is best known for its role during the Zulu War of 1879, particularly the defence of Rorke’s Drift.
After the battle at Isandhlwana, a force of some 4,000 Zulus headed towards the outpost of Rorke’s Drift where a garrison of around 150 men, including those from the 24th Regiment of Foot, were preparing to defend their position. For more than twelve hours, extending into the early hours of 23 January, the defenders fought off repeated attacks. During the fighting almost 20,000 rounds of ammunition were fired and, with bayonets fitted, around 400 Zulus had been killed at a cost to the garrison of 25 killed and wounded. 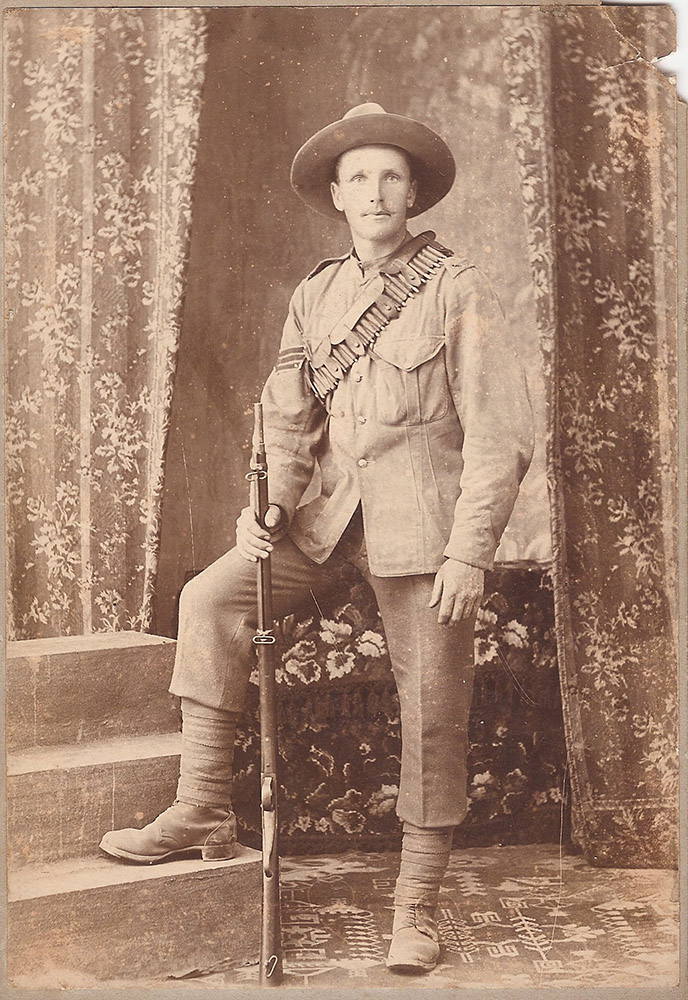 The first bayonet used with the Martini-Henry was a modified type originally developed for the Snider with a blade length of 17in. This was done by bushing out the socket ring by fitting a reducing ring so that it fitted the muzzle of the barrel, and this remained the standard type until 1876.The new bayonet was a socket-type known as the Type ‘73, with a triangular-section blade measuring 22in. This gave the troops a longer reach against an enemy when engaged in close-quarter fighting and the combined weight would have inflicted deadly wounds when thrust into the target. In 1875, the Royal Artillery had been issued with bayonets for its carbine version of the rifle with a blade length of 18in, of which 8in on the back edge had a cross-cut saw pattern. Further designs of bayonet were developed for the Martini-Henry, such as the new pattern sword-bayonets with a blade length of 18.5in, introduced in 1897.
During its service life, the Martini-Henry rifle received a series of modifications to produce four different Marks, as well as the carbine version. The first design, Mk 1, was followed by the Mk II, produced between 1877 and 1881, which lacked a safety catch. The Mk III was produced between 1881 and 1888, fitted with two metal bands to secure the barrel to the wooden fore-stock. The Mk IV design, produced in 1889, featured a longer operating lever but apart from this was otherwise unaltered.
The Martini-Henry remained in service until the late 1880s when it was replaced by the Lee-Metford, the first magazine-fed, bolt-action rifle to be used by the British Army. Today, the Martini-Henry remains a popular weapon with collectors who can build a full history of the weapon with an example of each version, complete bayonet types and inert ammunition, spanning its more than 30-year service history. Fully firing examples remain popular with shooters, with versions rechambered for a range of calibres, including .303in, .22in and 7.62mm. 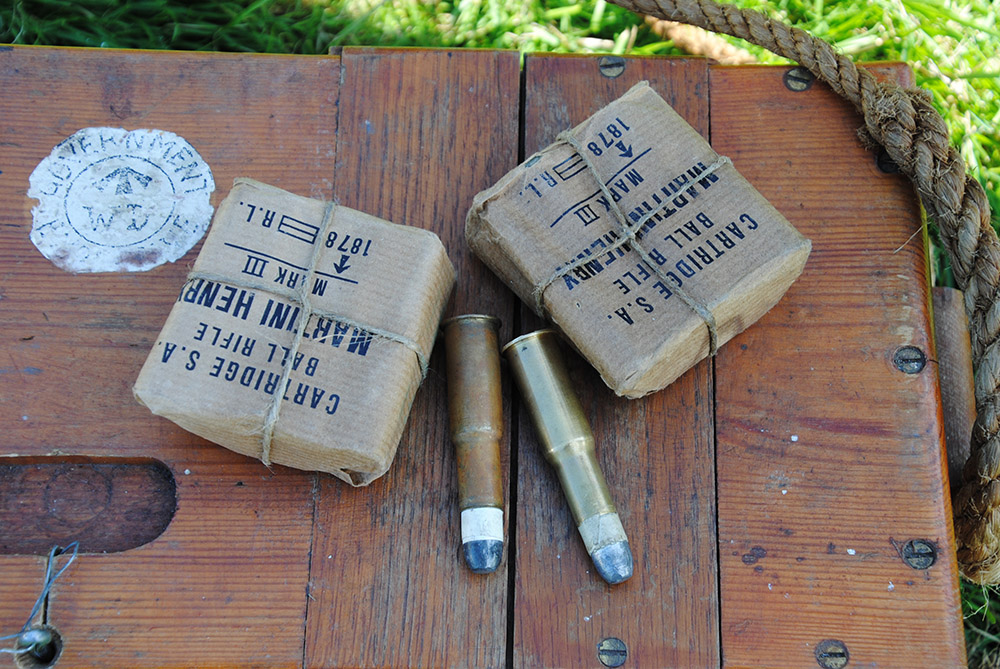 Rifle prices
Prices vary according to type, condition and calibre, such as around £200 for a .22in version to around £800 for a Mk II in original .450in calibre, increasing to £850 for a Mk IV version. The weapon has a unique appeal among military enthusiasts and collectors which, as the weapon approaches the 150th anniversary of its introduction into service, shows no sign of diminishing.

Want to know the full story of the Battle of Rorke's Drift? Click here.

Check out collecting these Zulu weapons.

Here are the medals awarded for the conflict.