George Prescott traces the development of the signalling tool from WWI.

The modern metal bugle was developed as a signalling and communications device from an instrument originally made from animal horn, its name originating from the Latin word buculus, meaning bullock. Formal military use of such a device in the British army began around 1764, when a German instrument, the Halbmondbläser, or half-moon bugle, started to be accepted by a small number of British infantry regiments. English cavalry regiments of the same period also used a similar valveless instrument with a smaller bell and more gradual taper, which had less carrying power than the infantry bugle but produced a clearer note at close range. 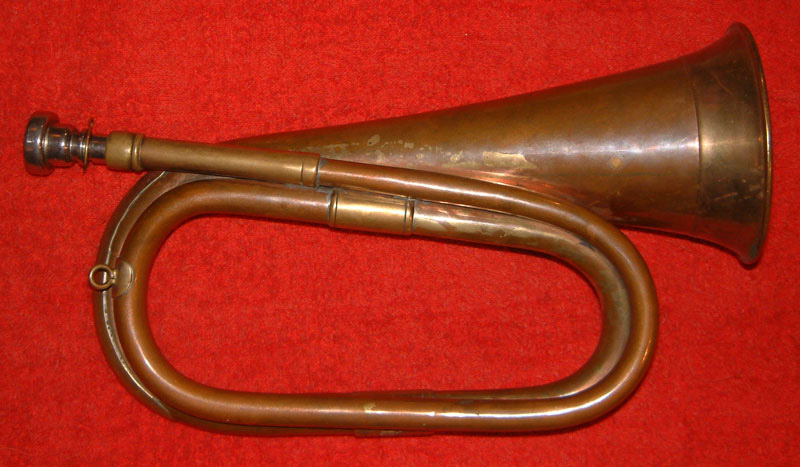 Right: British Duty bugle in good condition, showing the rings for attachment of the chain between the mouthpiece and the tube

Bugle calls were quickly standardised amongst infantry regiments for use in camp and barracks to direct men to a particular duty and signal events such as Reveille, Mess Call, Last Post and Lights Out. In addition to the more mundane camp calls, the cavalry bugle was also used to issue orders while in combat, typically Charge, Walk, Trot and March.

By 1914 and the beginning of the Great War, the limited use of cavalry and the introduction of telegraphs, field telephones and wireless resulted in the bugle being relegated to camp and ceremonial use by both sides, although buglers were assigned to Allied units as well as those of the Central powers, their role being to relay standardised instructions over short distances. 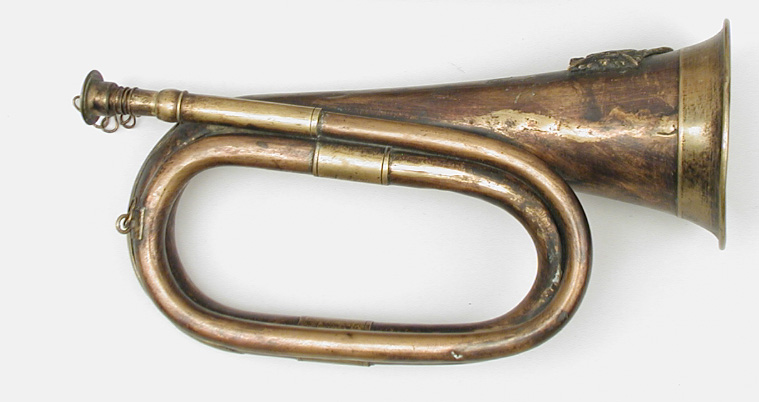 British bugles
After 1855 all regiments in the British Army were issued with a standard bugle, designated the British Duty Bugle, which is still in service up to the present day. This is a double twist instrument, 11in in overall length, the main body being a copper tube which is shaped into two roughly oval coils leading away from the brass mouthpiece and ending in a bell, also in brass, with a diameter of 4in. The bell of such a bugle originally purchased for issue by the British army is almost invariably stamped on the outer surface with the maker's name, a year (indicating the date of purchase) and the War Department's Broad Arrow.

British manufacturing stamps will include companies such as Distin, Hawkes & Son, Henry Potter & Co, Boosey & Hawkes and Besson. There are also legitimate Canadian makers such as R.S Wiliams & Sons Toronto. More complete examples will have a brass retaining chain between the body of the instrument and the mouth piece as well as tassels on the tube. 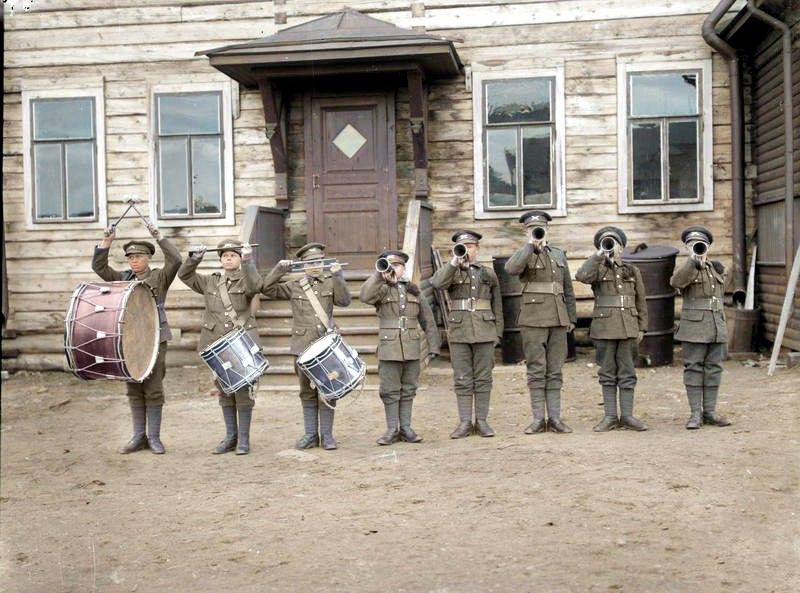 Right: Youthful buglers and drummer boys in service with the British army during WWI

Perhaps surprisingly, there is a considerable trade in reproduction British army bugles. Referred to disparagingly as Gunga Din bugles after Kipling's character, these instruments originate from India or Pakistan and are made of thinner gauge copper than the original antiques, and lack the stamps found on British Army bugles. The production of these bugles is not strictly a part of the illegal antiques trade, most instruments being sold honestly as souvenirs, although a number have turned up in US sales listed as Civil War relics, despite it being well known amongst Civil War experts that no British Duty bugle ever saw service with either side during that conflict.

More extreme examples of reproduction British army bugles can be found on the internet where there are well conditioned instruments with all manner of regimental and service markings stamped or soldered on the body of the bugle, together with the battles the bugle was used in. Often, they also come with a magnificent set of flamboyant tassels and even the name of the bugler and his service number. This is really a case of too much information because these were, above all, practical instruments and no bugler would bother with soldered badges that collected dirt and grime as soon as they were used in a muddy trench nor have his rank and serial number stamped on his instrument.

After all, he knew he was a bugler, didn't he? Another giveaway with reproductions of this sort is the nature of the WD’s Broad Arrow. It is illegal to stamp an item with that mark unless it is or was WD property, so these instruments sometimes have an incomplete Broad Arrow on the bell, often taking this form: /\

An original British Duty bugle with a verifiable history, complete, playable and in good condition may fetch as much as £500 at auction, although anything with a clear historical  provenance will, as is usual with militaria relics, fetch significantly more. A standard bugle without any history to say where it was used or came from, will be considerable cheaper, at around £30-£50. 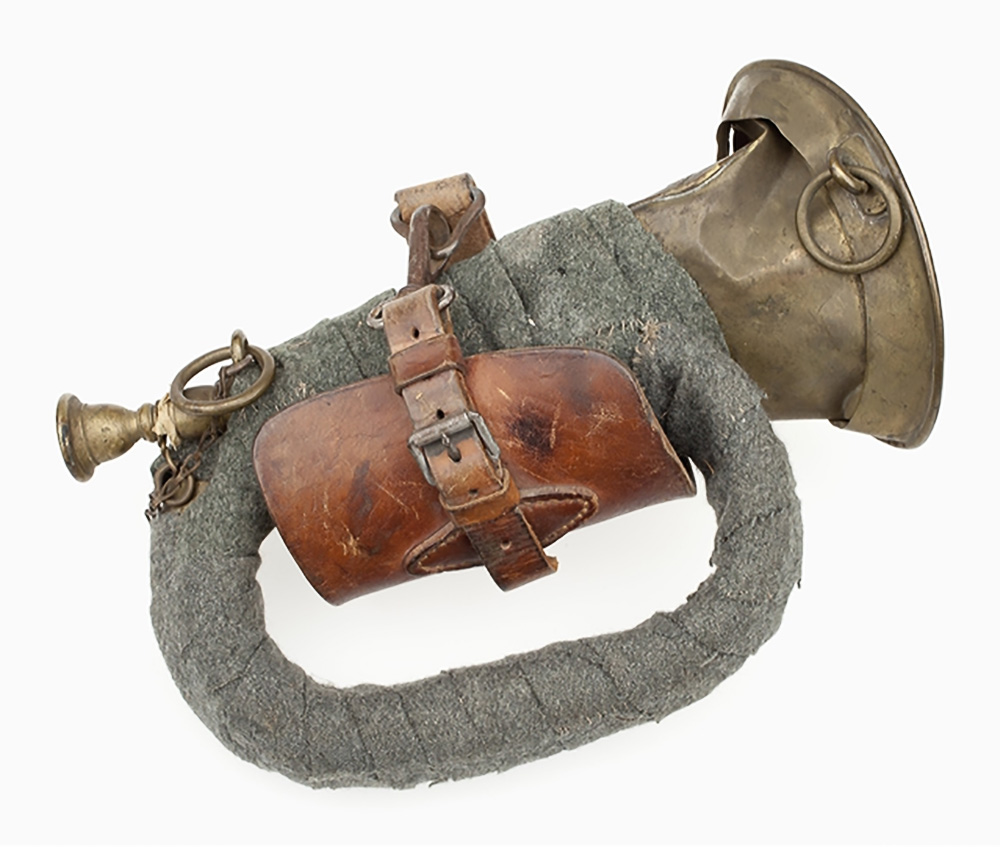 Right: German bugle from WWI. This example has seen hard service and is complete with a leather finger guard and chain between mouth piece and tube

US bugles
Two patterns of US military bugle are commonly offered for sale, the M1892 Field Bugle , tuned to G and the 1894 Trench Bugle tuned to B flat. The M1892 is between 16in and 17in in total length and is another double twist instrument, usually marked with a manufacturer's name or a ‘US Regulation’ stamp on the outside of the 4½in bell. Modern M1892 bugles are still manufactured in America by Buglecraft and copies made in India and Pakistan are common, but easily identifiable thanks to a lack of marks on the bell. Original manufacturers include: C.G. Conn, Wurlitzer, Holton, King, Buescher or Ludwig. 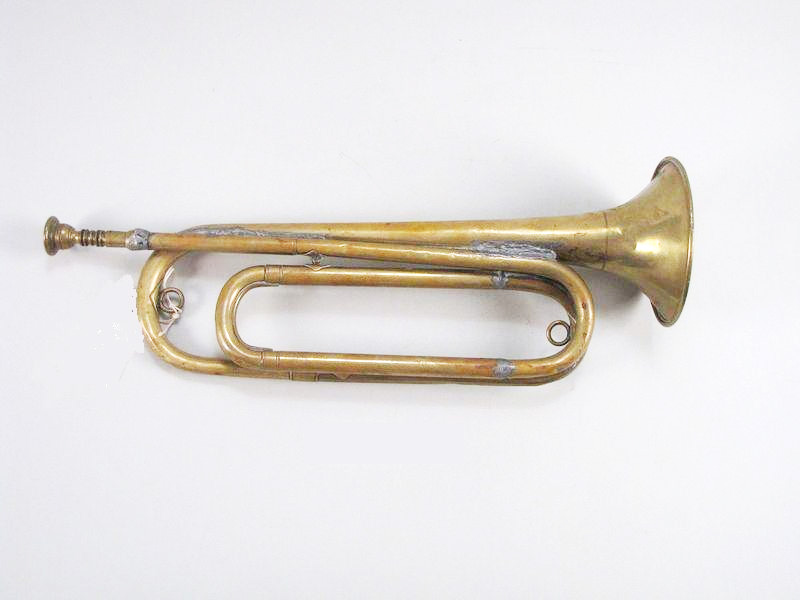 Left: A US army M1892 Field bugle, this example in poor condition, having been repaired with some clumsy soldering

The M1894 bugle is a smaller, triple twist instrument, only 10in long with a bell diameter of 3½in. Original military examples made after 1912 are stamped on the bell with the maker's name, specification number (Spec.1152) and year of production, while earlier military examples are often unmarked, as are all those manufactured for civilian use. Manufacturers include: Wurlitzer, R&H, J.W. York as well as a number of other, less well known brass instrument makers.

Other items associated with WWI bugles include 78rpm records produced for training purposes, leather straps for the American M1892 and M1984 bugles, original tassles for the British Duty bugle and cleaning kits.

Right: American Civil War bugle, showing the difference in conformation between this and the British Duty bugle. Instruments of this type are rare and collectible, this particular example having sold for $3,500