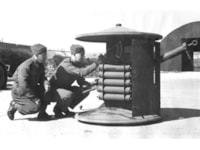 The British army, and indeed the entire British nation, was in a desperate situation following the Dunkirk evacuation of June 1940. While many trained personnel had been rescued for later campaigns almost the entire British gun park had been left behind in France. Invasion seemed imminent. While the determination to defend the United Kingdom mainland was present to a degree seldom seen before or since, modern warfare requires modern weapons and the British had virtually none.

In 1940 the United Kingdom was not fully organised or equipped for a modern war conducted by armoured forces. The nation’s defence industry was still at a stage where the heavier weapons, including artillery, were leaving the production lines in far too limited quantities and many of them were obsolescent, at best.

As always in such situations, one reaction was to devise numerous makeshift measures to provide the troops with something to fight with. High among the many priorities was some form of fire support weapon for the newly formed Local Defence Volunteers (LDV), later renamed as the Home Guard on 23rd July1940. Although largely armed with small arms, they were expected to harass and delay the enemy’s post invasion advances until the few fully trained army units still available could be deployed to where they could be most effective.

The situation was therefore ripe for improvisations, the unorthodox and the rough and ready. It was the era of the Home Guard pike, the Northover Projector and the Molotov Cocktail. Among all these desperate measures there was also the Smith Gun, one of the most unusual artillery weapons of the 20th Century.

What became widely known as the Smith Gun started life as a private venture by the Trianco Engineering Company of East Molesey, Surrey. This concern normally produced the range of toys and models marketed under the Triang (or Tri-ang) label.

One Trianco senior design engineer, recorded only as Mr Smith (about whom I would like to know more), decided that as the company had already devoted their resources to war work (their contractor code was S 411) they might as well design some form of fire support weapon. While the bulk of the Home Guard’s immediate small arms requirements were being met by mass purchases from the USA, the prospects for anything resembling field artillery would remain bleak for many months to come. That was where Mr Smith decided to act and his prototype gun emerged as early as July 1940.