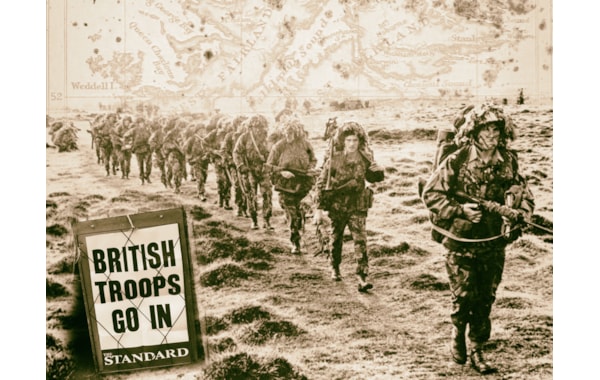 British troops go in to retake the Falkland Islands

Peter Duckers tells the story of the medal awarded to those who fought in the Falklands War.

Sometimes, British personnel have had to wait a long time to receive a medal rewarding their service in a particular campaign. Examples are easy to find: the retrospective Naval General Service Medal, instituted in 1847 for the French and Napoleonic Wars, was presented over 50 years after the first actions it commemorated, while the recent Canal Zone clasp for service in that area between 1951 and 1954 has also been awarded over 50 years after the event!
Some medals, on the other hand, have been produced and awarded very quickly; the Waterloo medal was issued within a year of the campaign, which is remarkably fast given that it was the first general award of its type. But few can have been proposed, designed, produced and issued with the speed of the medal for the Falklands War of 1982. The Argentine invasion of Las Malvinas began on 2 April 1982; the campaign was over in ten weeks and British authority restored by 14 June. The first South Atlantic medals were actually presented in the first weeks of October, fewer than four months later, the Medal Office at Droitwich having to take on extra staff to hurry the process. There were of course real political and propaganda reasons for this haste. The Tory Prime Minister, Margaret Thatcher, was eager to reinforce the political impact of the victory and anxious that the returning troops should be seen wearing their medals, especially for the Victory Parade in London on 12 October. The Conservatives won a landslide victory in the 1983 election partly as a result of the war. 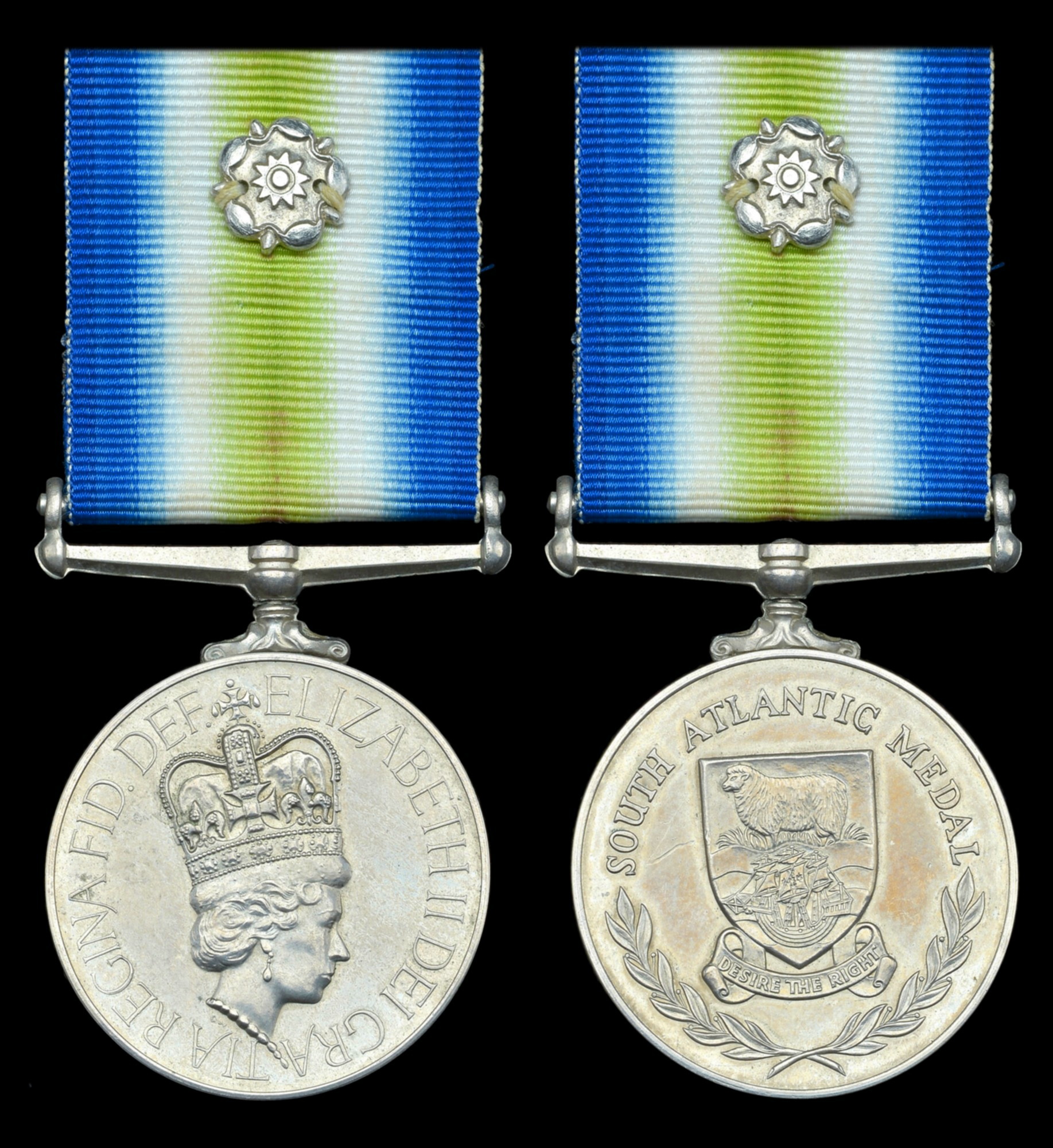 The medal itself was authorised by Command Paper 8601 of 13 July 1982 – the day before the Argentine surrender – and had been presented to all recipients by February 1983. Of standard 36mm diameter the medal was, unusually for a modern British campaign medal and on the grounds of cost, not made of silver but of cupro-nickel; it was struck by the Royal Mint and named and issued at the Army Medal Office.
The obverse bears a right-facing effigy of  Queen wearing the tall Jubilee Crown designed in 1977 for use during the Queen’s Silver Jubilee and used on medals several times since (e.g. the Jubilee Medal itself and some later campaign awards). It carries the usual abbreviated titles: ELIZABETH II DEI GRATIA REGINA FIDEI DEFENSOR (‘Elizabeth II, by the Grace of God, Queen, Defender of the Faith’).
The reverse has an uncomplicated but appropriate design in the form of the armorial bearings of the Falkland Islands, carrying the islands’ motto ‘Desire the right’ above the words ‘South Atlantic Medal’. A partial laurel wreath completes the reverse border.
Slightly fewer than 30,000 medals were awarded, all named around the rim in small sans-serif machine-impressed capitals; naming to Merchant Navy personnel is slightly larger and their medals do not carry the name of the vessel. Unsurprisingly, given the huge distance covered to reach and supply the campaign zone (8,000 miles) and the fact that it was an island war, most awards went to naval and merchant naval recipients (in approximate terms, 13,000 to the former, 2,000 to the Royal Fleet Auxiliary and 1,800 to the Merchant Navy). To the Army, there were approximately 7,000 awards, with 2,000 to the RAF, and a number also going to civilian recipients.
The shaded and watered ribbon, apparently designed by HM the Queen and produced in haste by Toye, Kenning and Spencer, reflects the colours of the ocean, with a central stripe of sea green flanked on each side by stripes of white and Empire blue. It bears a noticeable similarity to the ribbon of the 1939-45 Atlantic Star, for obvious reasons. 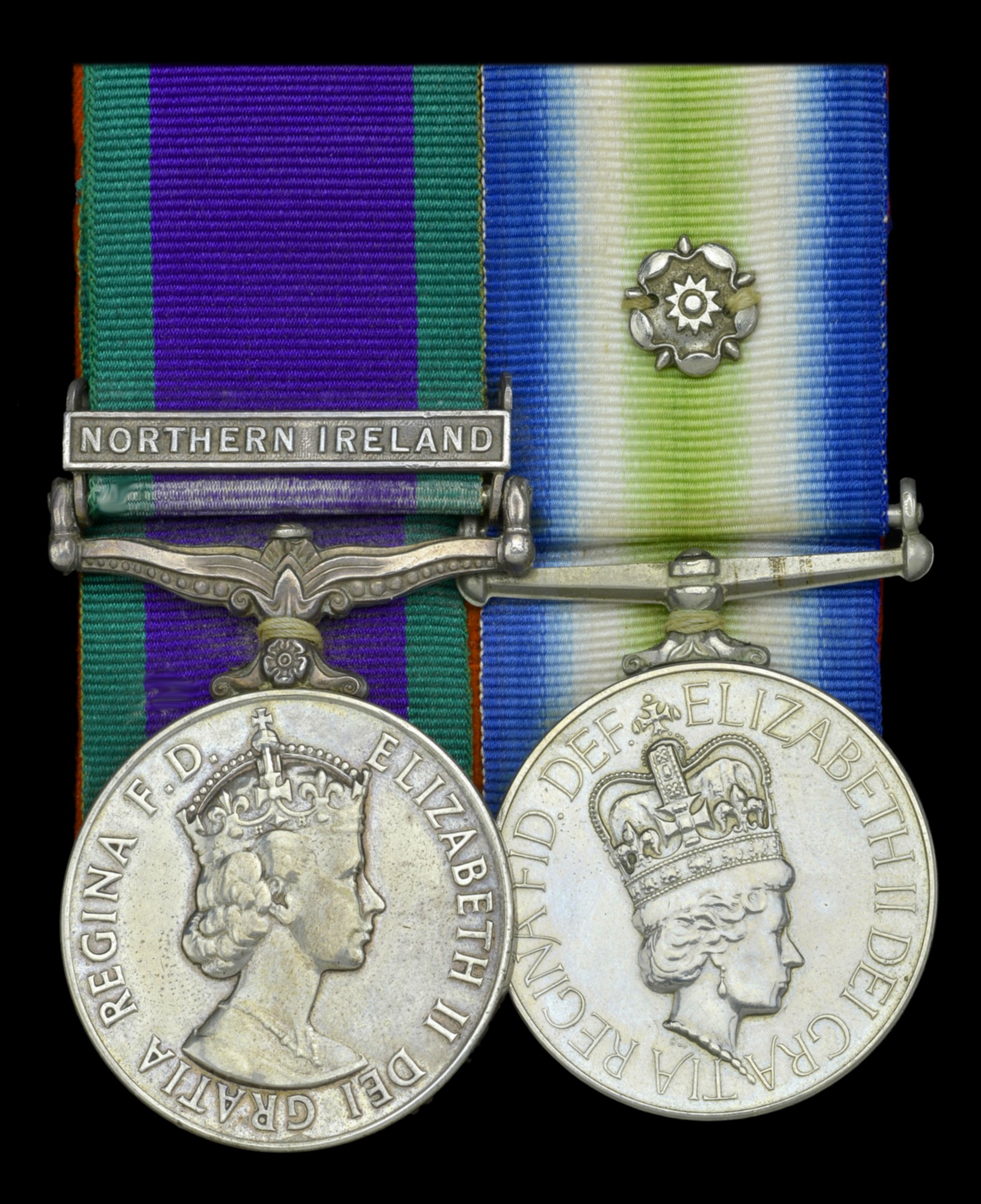 An unusual feature was that no battle clasps were authorised. Instead, the medal was awarded with or without the novelty of a white-metal rosette worn on the ribbon. The rosette (also produced by Toye, Kenning and Spencer) was given to those who had completed at least one day’s service within the designated war zone, between 35° and 60° South latitude, or at least one operational sortie south of Ascension Island, between 2 April and 14 June 1982, the beginning and end dates of the conflict. The rosette is also worn on the ribbon bar if ribbons alone are being worn.  The vast majority of South Atlantic medals were issued with rosette, although over 90% of those to the RAF were awarded without and are thus rarer; most of their recipients were stationed on Ascension Island, some 3,300 nautical miles north of the Falkland Islands and the war zone.
The medal without rosette was originally granted for 30 days’ continuous or accumulated service between 7° and 60° South latitude between 2 April and 14 June 1982 (and completing no later than 12 July 1982). However, following the Independent Medal Review by Sir John Holmes as late as 2012, the qualifying period for the medal without rosette was extended to 21 October 1982, the date that the RAF Stanley airfield was completed and other clearing up duties finished. Interestingly, the medal was conferred on the Falkland Islands as a whole, in recognition of their fortitude, in 2014.
A total of 255 servicemen and three Falkland Islanders were killed on the British side, along with up to 1,000 Argentinian personnel, and approximately 1,200 Argentine and 780 British personnel were wounded or injured. The conflict resulted in two awards of the Victoria Cross, both posthumous, conferred on Lieutenant Colonel H. Jones, OBE and Sergeant I.J. McKay of the 2nd and 3rd Battalions The Parachute Regiment respectively. Apart from these, there were over 830 honours and awards for the war – a large number for such a brief campaign – with only 26 to women. There were, for example, 29 DSCs, 21 DSOs, 15 MCs, 8 DCMs, 32 MMs and 6 DFCs. Such awards are rare on the market and command high prices. A complete list can be found at Falklands Gallantry Medals. 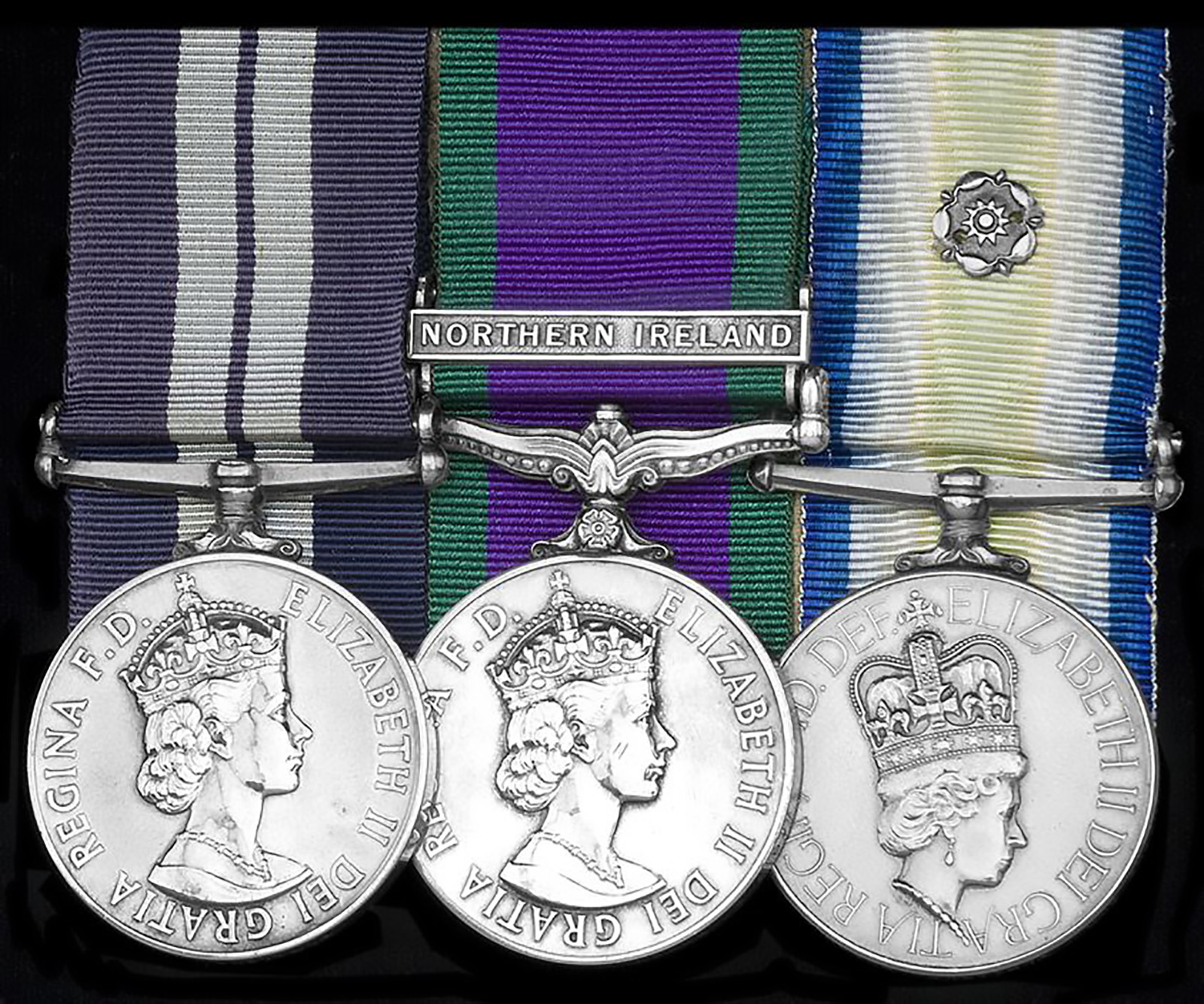 The medals remain popular with collectors, especially to those regiments which were heavily engaged, like the Welsh Guards, the Paras, the Royal Marines and the Gurkhas and not least those to Royal Navy recipients since, unusually for modern British campaigns, the medal actually names the ship on which the recipient served. Those to the submarines, especially HMS Conqueror, are very collectable (Conqueror controversially sank the Belgrano on 2 May), as are medals to ships which featured prominently in the conflict or were seriously engaged, like Ardent, Coventry, Sheffield and Glamorgan, as well as the flagship Hermes or the converted liner Canberra, which served as a troopship. Those to units represented by small numbers of personnel (like the Army Dental Corps) or to Special Forces, like the SAS, are also highly sought after.