George Prescott explains why the Sten sub-machine gun was the weapon of choice for SOE agents in WWII.

Produced after Dunkirk to replace the huge numbers of weapons lost during the evacuation, the Sten sub-machine gun was the brainchild of Major RV Shepherd OBE and Harold Turpin, its name composed of the initial letters of the inventors’ surnames and ‘EN’ from Enfield. With Britain in such desperate need of weapons, cheapness and speed of manufacture were the designer’s main concerns, and they came up with a sub-machine gun whose assembly required only minor welding of simple parts stamped from sheet metal, with minimal machining for the bolt and main and trigger springs.
Chambered for Luger’s ubiquitous 9mm Parabellum cartridge, the Sten had a simple blow-back mechanism, operated by placing a full magazine in a slot at the left side of the receiver, drawing back the bolt until it was retained by the sear and pulling the trigger. The standard 32-round magazine then emptied in approximately three seconds on fully automatic, a selector button on the right of the frame giving a choice of automatic or semi-automatic fire. Unfortunately its austere design, together with the 9mm pistol ammunition for which it was chambered, brought its own disadvantages. Most notable was severely restricted accuracy, the effective range of the weapon being only 100m, although at anything below this distance it was frighteningly effective.
Accepted into service with British forces in 1941 as the 9mm STEN Machine Carbine, Mark 1, later developments centered around simplifying the manufacturing process and reducing costs even further, rather than improving performance, and these measures were so effective that a later variant, the MkIII, could be produced in five man-hours for just over £2. By the end of WWII, approximately four million Stens had been manufactured by RSAF Enfield and its British and Canadian subsidiaries.

SOE arranged for thousands of these weapons to be dropped to European resistance groups who valued them for their devastating firepower and simple construction, which made a Sten easy to both conceal and repair. The Cairo office of the SOE also found them particularly useful because they were fired without lubrication and thus did not attract dirt and other debris into the mechanism, unlike the more sophisticated Thompson SMG. Its 9x19mm chambering also gave the Sten another overwhelming advantage - it used the same ammunition as the German Army’s own sub-machine guns, the MP38 and MP40, which was very convenient for Resistance groups, who could replenish their supply of cartridges from the enemy’s own ammunition pouches.
As well as receiving complete weapons several resistance groups also arranged their own production facilities. The Norwegian underground army (or Milorg) manufactured some of its own Sten guns and Danish resistance fighters also produced nearly 1,000 copies of the weapon from clandestine factories in and around Copenhagen. In Poland, approximately 23 underground workshops turned out 11,000 copies of the Sten MkII for the Polish Home Army between 1942 and 1944, all these Polish weapons being stamped with English marks to disguise their origin.

Despite its popularity, it is certainly true that the Sten had faults. It had to be kept clean or stoppages would occur due to dirt in the chamber or bolt mechanism. Magazines could also be temperamental and had to be loaded and treated carefully after fitting. Poorly tempered springs in early magazines were a particular problem, and experienced users loaded magazines with only 25 cartridges, rather than standard 32 rounds, so as not to over-stress this component. In addition, holding the weapon by the magazine when firing tended to bend its lips, often resulting in a stoppage, and hands had to be kept well clear of the cocking lever slot or the result might be a severed finger or thumb. Even more worrying, in earlier versions the simple, open bolt mechanism was prone to firing spontaneously if dropped or handled carelessly, since, if it was dropped on the butt, the bolt could move back far enough to chamber and fire a cartridge without the need to fully cock the weapon. 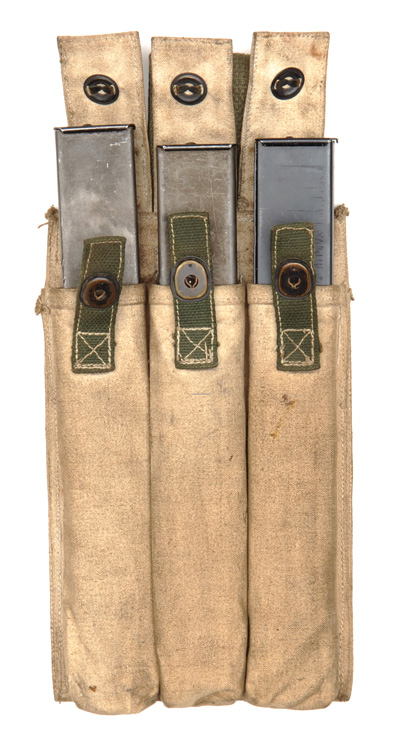 Wartime service with the SOE
Since it has become widely accepted as fact that all the men who used Shepherd and Turpin’s  Woolworths gun loathed it, it may come as something of a surprise to find that, in truth, many preferred it to the much heavier Thompson. This was especially true amongst SOE agents and their Resistance colleagues who found the simple Sten easy to conceal once it had been taken to pieces and particularly favoured the MkIIS suppressed version, which they used in semi-automatic mode to avoid damage to the silencer. Stens were used in many SOE operations, in particular: The Heydrich assassination, when the weakness in magazine construction may have been the reason Gabčík’s Sten failed to operate; Operation Ratweek, during which SOE agents executed collaborators in Norway, France, Denmark and the Netherlands prior to June 1944; and Operation Jedburgh, in which SOE agents coordinated continental resistance efforts in the run-up to D-day.

Variations
The magazine housing is often found stamped with the Model number, in the following form, although the stamp may be indistinct: ‘STEN’, ‘Mk5’, ‘M/78’. The ‘Mk5’ indicates the model designation, ‘M/78’ probably being an inspector’s stamp. The lower surface of the magazine housing may also be stamped with the maker’s name and a serial number and guns used by British forces will also bear a War Office Broad Arrow.

MkI*
A simplified version of the MkI, the wooden furniture being replaced with cheaper, steel components.

MkII
Production: approximately two million weapons. The most common variation, this type differed from the MkI in having a removable barrel which projected beyond the barrel sleeve. A suppressed (silenced) version, the MkIIS, were also produced at the specific request of the SOE for covert operations. The barrel of this weapon was ported and surrounded by a jacket filled with baffles to dissipate the propellant gases, the bolt being lightened and several coils removed from the recoil spring to improve cycling. Unfortunately, sustained  firing caused the barrel and silencer to overheat, emptying one magazine on fully-automatic being sufficient to burn out the suppressor.

MkIII
Production: approximately one million weapons. The most simplified of the war-time designs and the cheapest Sten, a MkIII could be produced in five man-hours for just over £2. 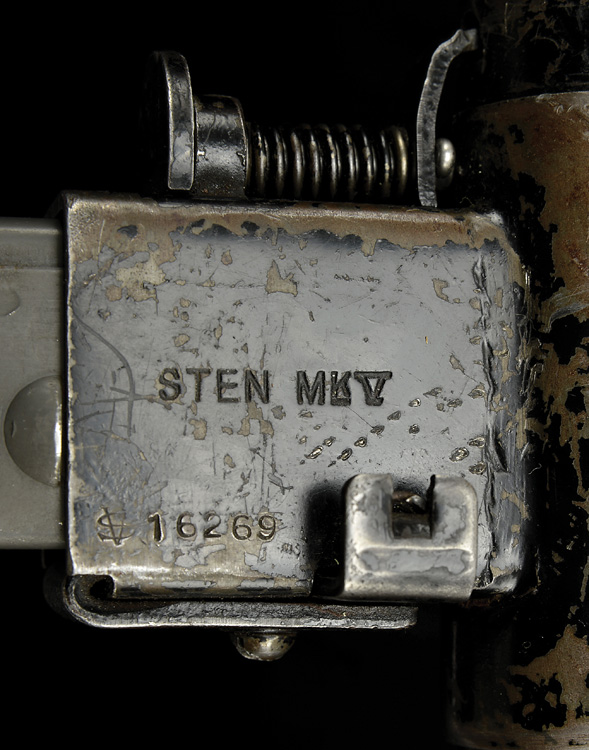 MkV
Production (including Mk VI): approximately 1 million weapons. Produced in 1944 when the threat from Nazi Germany was less immediate, these were a better quality version of the MkII, with a wooden pistol grip, fore grip and stock. A No 4 Lee-Enfield foresight and a bayonet mount were also fitted.

MkVI
A suppressed (silenced) version of the Mark V, the clumsy suppressor increasing its weight from seven to nearly 10lb.

Collecting
Being a weapon capable of fully automatic fire and chambered for a 9mm cartridge, a working Sten may not be held legally in Britain, except under special circumstances, although properly certificated, deactivated weapons are acceptable. In America, original, pre-1968 working Stens may be owned in some states, but legislation is inconsistent and any buyer needs to check with the local licensing authorities before purchase.
Original, deactivated guns of all types may be had for about £500. Magazines go for between £25-£35. Other spares, such as the skeleton butt, are also available, with butts starting at £50. Working weapons are very rare and much more expensive, a reasonable MkII fetching between $3,500 and $4,000 on US auction sites.