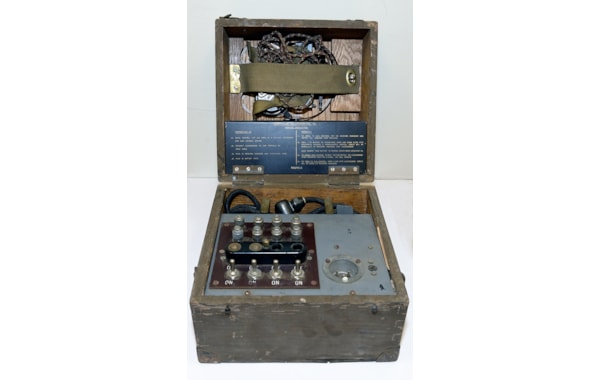 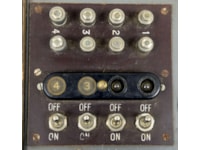 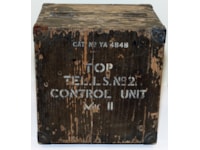 A late-night browse on a popular internet auction site resulted in a quick impulse purchase of a rather interesting piece of British military communications equipment from World War II. A few days later the postman delivered a large, heavy box containing a mobile switchboard for a battery of artillery pieces.

The Telephone Loud Speaker Control Unit was issued to artillery batteries during World War II. It allowed the battery commander to communicate with the four guns in the unit and provide immediate instruction on things such as range, shell type required and corrections. A US Army report in 1942 explained, “The wide dispersion of guns has made necessary the use of an enunciator system between the executive and the individual sections of the firing batteries. Such a system permits the executive to coordinate and command his guns in such a manner as to control rapidly the guns for effective fire.” A footnote adds, “The British use the Tannoy system. It is a miniature public address system, now reported to be standard issue for British artillery units.”

ltogether the set comprised the control unit, batteries and four speaker/transmitter units that went out to each of the guns. The control box was in effect a miniature switchboard for a five-way field telephone. As with most British Army communications equipment of World War II, the control unit is housed in a stout wooden box, with a label indicating contents painted on the lid; the box weighs 22lbs when complete, so is a heavy piece of equipment. A carrying strap attaches to two metal loops so it can be carried over the shoulder.

The box opens into two halves, with the main switchboard in the bottom of the box and storage for headphones and microphone in the lid. Four terminals are provided to connect the wires from each of the speaker/transmitter units, a switch beneath allows individual or multiple gun sites to be selected to speak with, and a bulb lights up to show which ones are connected.

A pair of terminals are provided on the main control panel, the larger one for the microphone (which is sadly missing), whilst the smaller terminal allows the headphones to be plugged in. Behind the switchboard are two coiled wires with terminals. The wires are used to attach the system to a battery box, and standard Niphan plugs are attached to the ends of the cables.

The lid of the control unit holds the accessories for the set, and white outlines painted on the base of the box indicate where to store the headphones and microphone when not in use. A webbing strap and brass turn button secure the headphones. The headphones provided are very similar to those used on other British Army radio and communications sets, with a pair of Bakelite speaker units and a wire and web harness to attach them over the operator’s head. Spare parts are very minimal for the control units, but a small tinplate cover between the arms of the headphone stowage reveals a space for spare bulbs for the gun indicator lights on the switchboard.

The microphone storage box is covered with a hinged tinplate lid, which has details of how to use the control box printed on it. These instructions indicate that this set was made by Truvox, one of two British manufacturers; the other is the more famous firm of Tannoy. These sets were also produced, with local variations, by manufacturers in Canada and Australia.

The Tannoy system of battery control was widespread across the British Army’s artillery units; it saw use in all theatres of war throughout WWII and well into the post-war period. As such these units are still available to buy, but as with all British communications equipment have become rarer and more expensive over the last few years: examples of the loudspeaker control unit can be found from £40 upwards.