Weapons of the Zulu 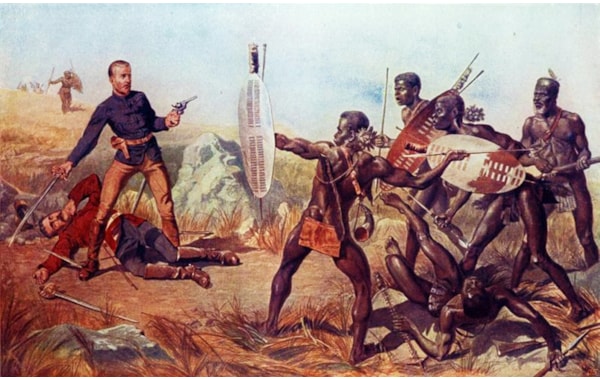 The primitive weapons and tactics, which nearly destroyed Chelmsford’s forces, are described by George Prescott. 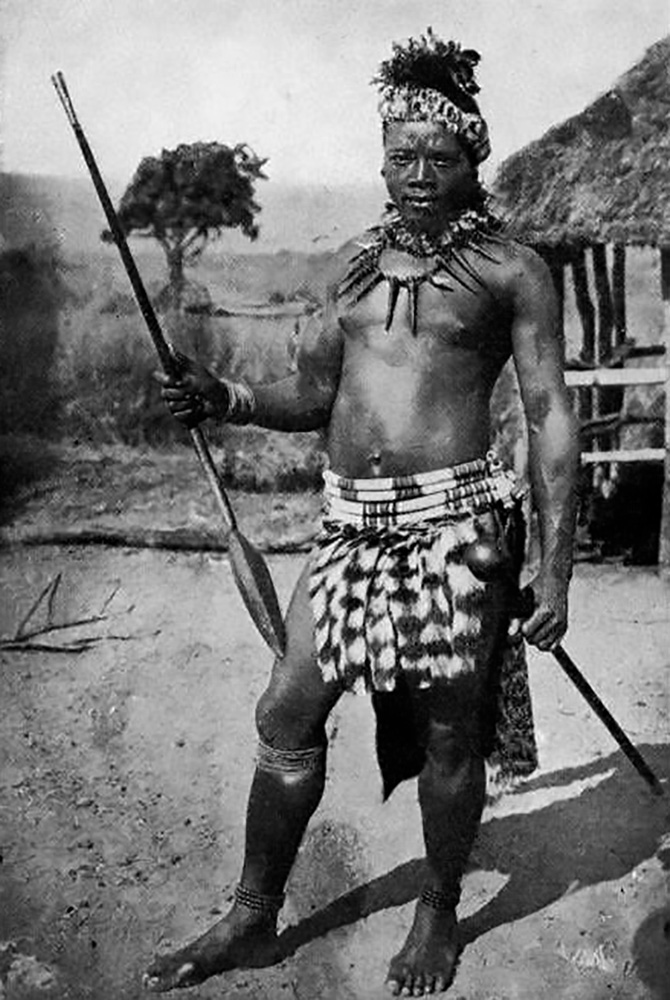 The Zulu army was initially brought into being by T’Shaka, first King of the Zulus, who introduced a number of innovations which had not been seen in warfare between Nguni tribes before. It was this army, forged by Shaka and maintained by his brother Mpande and nephew Cetawayo, which faced the white soldiers at Ishandlwana and then Rorke’s Drift.

Prior to Shaka’s ascent to the Zulu monarchy, battles between the various tribes had consisted of warriors standing at a long spear-throw from each other and hurling their light, throwing assegais at the enemy formations. Almost no one was ever killed and the battle usually ended when each side had used up all their spears. Shaka changed all that. He instituted a system of total war, employing his famous ‘Chest, Horns, Loins’ formation which surrounded and completely annihilated an enemy force. In order to ensure the success of his new tactics, he is said to have ordered his warriors to discard their sandals and harden their feet so that they could run barefoot, as well as introducing new weapons which further ensured the success of the Zulu army. 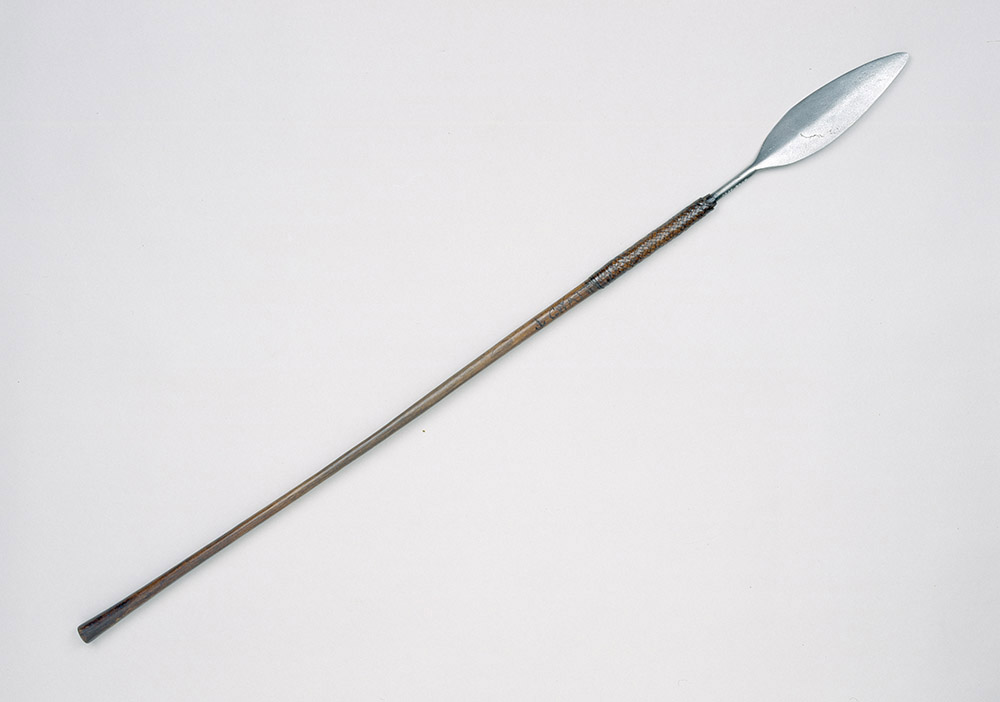 An assegai (or assagai) is the general name used on the African continent for a light spear designed for throwing. Various types of assegai were in use all over Africa and it became the most common type of weapon used there before the introduction of firearms. The Zulu and other Nguni tribes were particularly adept with this type of weapon but when Shaka became a soldier at 16, he quickly realised the throwing assegai’s limitations.

The throwing spear, with its narrow 5in blade, was no use at all at close quarters and Shaka is claimed to have broken a number before he decided that a new design of weapon was required. Thus was born the iklwa or ixwa, a short stabbing spear with a 14in double-sided, razor-sharp blade mounted on a 24in shaft. Its name derived from the sucking sound that was heard when the weapon was withdrawn from a victim’s wound. Throwing assegais was apparently still retained for use by the Zulu army as an initial barrage to disconcert the enemy and allow the Zulus more time to close upon the enemy with their ixwa. 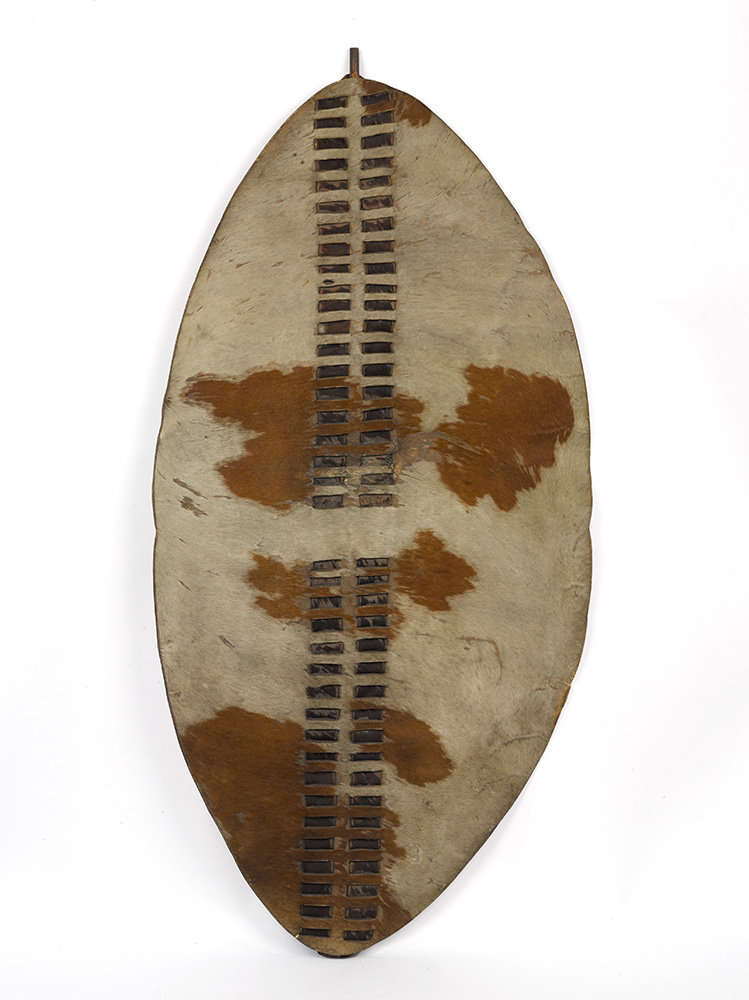 Since before the time of Shaka, shields had been the property of the king and every regiment was assigned a different colour. They were constructed of ox hide, which had been pegged out in the sun to dry before being pounded into a hollow shape with a rounded stone. The hide was then cut to size for the shield, a single shield requiring most of an ox hide.

With the shield cut to shape, a double row of slits termed imigabelo were then cut down the centre of the shield and fitted with ox-hide thongs to allow it to be secured to a long, stout, removable shaft called a mgobo, to which the handle was also secured. The mgobo projected from both ends of the shield, which was tall enough to allow the warrior to just glance over the top, while the top of the mgobo reached the crown of the owner’s head and was usually decorated with strips of fur wound around it.

The Zulu army during Shaka’s reign had a shield 5ft high, called an isihlangu, although later, they adopted a shorter shield only 36in high, called an umbumbolozo. Both types were made in the same way. At Rorke’s Drift the shorter shield seems to have predominated and more use was made of throwing assegais than in Shaka’s day.

The shield formed part of the Zulu fighting technique, so that when a Zulu soldier faced an enemy he immediately charged the other man, caught the side of his enemy’s shield with the edge of his own shield, wrenching his enemy’s shield aside and exposing his left side for a thrust from his ixwa. The nature of the wound produced by the massive blade probably meant that few, if any, survived that stroke.

Clubs were also standard equipment for Zulu soldiers and they were produced in a variety of patterns, although an ironwood shaft topped by a steel or brass sphere seems to have been the most popular type.

Zulu weapons are seen at auction more often than many collectors may suppose and they are starting to become a sound investment for those interested in Great Britain’s small colonial wars.

Shields need to be examined with some care as the hide from which they are made is often not well preserved. A Zulu shield in good condition will fetch between £300 and £500, much more if the object has some provenance.

Ixwa usually fetch around £150, but may realise much more if there is some provenance. Assegais are more common so expect to pay perhaps £50-£100 for a good example.

Also known as knobkerries, these Zulu war clubs go for between £80 and £100, depending upon their condition. As usual, any weapon with significant provenance will fetch considerably more.

Read all about the defence of Rorke's Drift here.

Check out the development of the Martini-Henry rifle here.

Discover the medals awarded for the campaign here.