Battle of Trafalgar pistol at auction 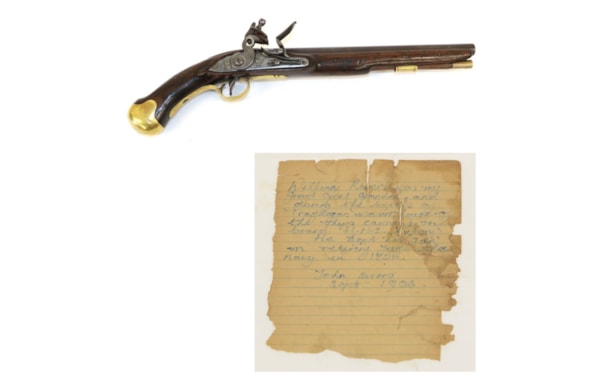 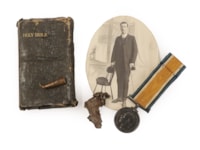 A flintlock pistol once owned by William Rivers, who served on board H.MS. Victory during the Battle of Trafalgar, is to be sold in Tennants Auctioneers’ Militaria and Ethnographic Sale on 14 April.

The 22 bore British Flintlock 1801 Pattern Long Sea Service Pistol is being sold with an estimate of £1,000-£2,000 plus Buyer’s Premium. The pistol is sold with a handwritten note which was found rolled up in the barrel. The note reads: ‘William Rivers was my great great grandad and during the Battle of Trafalgar was in charge of the ships cannons on board H.M.S. Victory. He kept his gun on retiring from the navy in 1825 - John Rivers 1906’. A bust of William Rivers (1788-1856) is held in the collection of the Royal Museums Greenwich. Rivers lost his leg at the Battle of Trafalgar, and later became Lieutenant of Greenwich Hospital.

Also in the auction, a British War Medal awarded to Sergeant CE Keay is being sold together with related items with an estimate of £60-£80. Amongst the collection of photographs, cap badges, wallets and sundry items are pieces of shrapnel and a pocket Bible with a bullet mark and the offending bullet. Sergeant Keay’s life was saved during World War I by the Bible, which was in his breast pocket and deflected a bullet that would otherwise have proved fatal. Keay was later hospitalised from September 1917 to March 1918, when he had over 20 pieces of shrapnel removed from his body.

From World War II comes a No. 2 Service Uniform that once belonged to Captain William Webster RASC (estimate £80-£120). Captain ‘Bill’ Webster was mentioned in Despatches in Italy in 1944 and was one of the few soldiers to be caught up in between the Communists and non-Communists in the Dekemvriana crisis in Athens in the aftermath of the War. Many people in Athens thought the small British SAS contingent and other support units had changed sides and were supporting ex-Fascists. Bill, who had run a garage in Edinburgh before the war, was organising support for the handful of Sherman tanks, when he was killed by a terrorist grenade.

Next is a Korea Pair, comprising Korea Medal and United Nations Korea Medal awarded to George Eric Goodwin of Everton following his service in the 11 (Sphinx) Battery during the Battle of the River Imjin in 1951 (estimate £180-£250). An Early 20th Century ‘Roorkhee’ Campaign Chair, a collapsible wood and leather contraption issued to British officers between 1898 and World War II is offered with an estimate of £100-£150. The top lot in the sale are a Pair of 19th Century Duelling or Officer’s Pistols by Joseph Manton, a leading London gunsmith, offered with an estimate of £7,000-£8,000.

Further highlights of the sale include a collection of posters from WWI and WWII, recruiting for the army, blood donors and more.  One of the top lots is a World War II Air Raid Precautions recruitment poster promoting the Women’s Voluntary Services (estimate £150-£250). Also of note is a nickel-plated Six-Dial Game Counter by James Dixon & Sons, Sheffield, designed with six dials for counting pheasants, grouse, partridge, rabbits, woodcock and hares (estimate £2,000-£3,000).

IWM opening in May

09 April 2021
Tweets by The Armourer Magazine 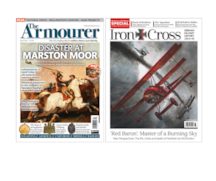 Buy issues of your favourite magazines directly from us or subscribe to save even more money!