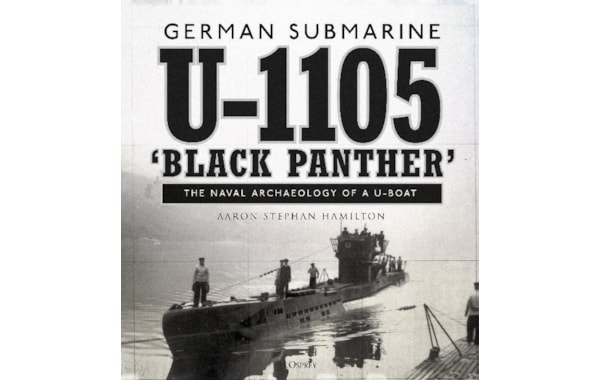 A new book looks at the history and marine archaeology of an innovative late-World War II U-Boat that currently lies as a wreck in the Potomac River.

The U-1105, called the Black Panther, is unique among German World War II submarines. Technologically innovative, it was the only U-Boat to conduct a wartime patrol while equipped with the airmast (snorkel), GHG Balkon passive sonar to improve detection of Allied ships while submerged, and a rubberized coating known as ‘Alberich’ which significantly reduced its own sonar signature. After the end of World War II, the U-1105 was the last U-Boat to sail across the North Atlantic under its own power during the winter of 1945–46, and became the single most tested U-Boat by the Western Allies before finally being sunk to the bottom of the Potomac River. Resting there in the mud, the U-1105’s complete history has remained obscured behind the veil of time – until now.
This highly illustrated book uses many new and previously unpublished images to tell the full story of this remarkable U-Boat. Drawing on decades of archival study and research dives, it provides technical detail on each of the U-1105’s late-war innovations and a full-colour underwater guide to all the key features of the wreck site.