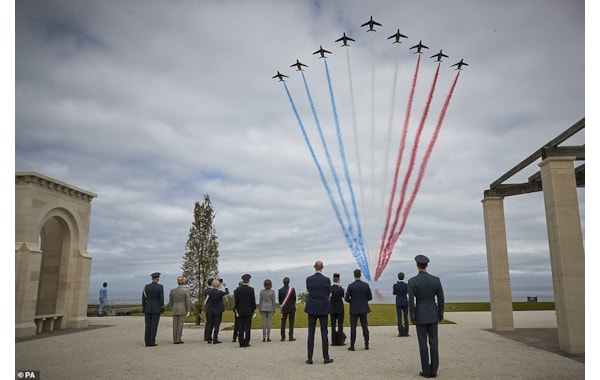 The British D-Day Memorial has been officially opened in France on the 77th anniversary of the Normandy landings.

Due to open last year, but postponed because of the pandemic, the British Normandy Memorial records the names of all the 22,442 people who were killed on D-Day. Its £30m cost was funded by the UK government, private donations and fundraising efforts by D-Day veterans like 94-year-old Harry Billinge, who was made an MBE for raising more than £25,000 towards it. It was designed by British architect Liam O'Connor.

Only a small number of people were able to attend the event this year in the Normandy town of Ver-sur-Mer, where the memorial is situated. As a result, many veterans watched the ceremony by video link, including 100 who gathered at the National Memorial Arboretum in Staffordshire.

During the ceremony the Last Post was played at 11am to begin a two minute silence, which was followed by British and French wreaths being laid while bagpipes played. The Red Arrows of the RAF and the Patrouille de France of the French Air Force then flew overhead to mark the opening of the Memorial. Lord Edward Llewellyn, the British Ambassador to France, presided over the ceremony. He was joined by Lord Peter Ricketts, chairman of Trustees at the Normandy Memorial Trust, and senior French guests.

The opening ceremony included coverage of the Royal British Legion's service of remembrance at the Bayeux Commonwealth War Graves Cemetery. The French ambassador to the UK was also able to formally present Legion d'Honneur medals to some of the surviving Normandy veterans.

Then, in a video message, The Prince of Wales, who is patron of the Normandy Memorial Trust, released a video message saying that the memory of these "Remarkable individuals should be preserved for future generations as an example of personal courage and sacrifice, for the benefit of the wider national and, indeed, international community. I know just how much our incomparable veterans had hoped to be in Normandy today to see their memorial for themselves. Despite having to watch via satellite link, this in no way obscures the enormous regard, and admiration, in which we hold our veterans - or diminishes our debt of gratitude to the more than 22,000 men and women whose names are now permanently inscribed in stone in this place of honour above Gold Beach.”

Prime Minister Boris Johnson paid tribute with a comment on Twitter, reading: ‘The hopes and prayers of liberty-loving people everywhere marched with them. 77 years on, we thank and remember them.’

The Normandy memorial sits on a hillside overlooking Gold Beach and consists of a temple-like structure containing 160 stone columns, inscribed with the names of the dead, a bronze sculpture of three charging infantrymen by British sculptor David Williams-Ellis, and a wall featuring the names of those who were killed on D-Day itself. Among those who lost their lives during D-Day and the Battle of Normandy were two women nurses: 27-year-old Sister Mollie Evershed and Sister Dorothy Anyta Field, aged 32. Sister Evershed was on a Hospital Carrier ship, the Amsterdam, treating casualties from Juno Beach when the ship hit a mine. As it sank, she and another nurse went below decks and carried 75 men to safety, helping them into a waiting lifeboat. Tragically, she and her fellow nurse went down with the ship. She was posthumously mentioned in dispatches and awarded the King's Commendation for Brave Conduct. There is also a monument dedicated to the memory of French civilians who died during the liberation of Northern France.