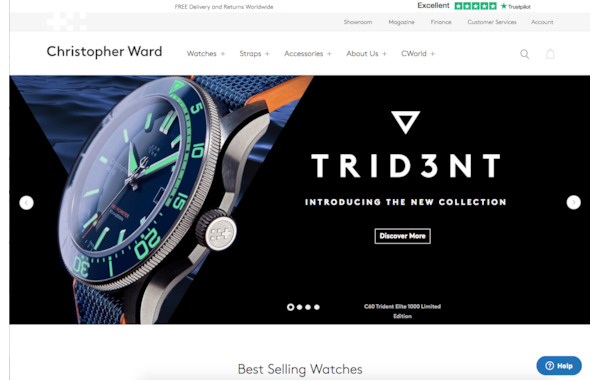 The Ministry of Defence (MOD) has named Anglo-Swiss watchmaker Christopher Ward as one of five brands approved to use official UK Armed Forces insignia on watches sold to the general public.

Christopher Ward, headquartered in Maidenhead Berkshire, designs in the UK and makes its watches in its own atelier in Biel, Switzerland. Combining the best of British design with the precision of Swiss manufacture allows the ecommerce-only brand to deliver premium quality mechanical and quartz watches at excellent value. Already the largest British mechanical watch brand by volume, the new partnership with the UK Armed Forces marks a milestone in the brand’s fast-growth trajectory over its short, 15-year history.
The Official License Agreement makes Christopher Ward one of just five brands approved to make watches bearing the official MOD insignia for sale to the UK Armed Forces as well as the general public.
Working in partnership with the Ministry of Defence and taking inspiration from military design cues both in watches and in the field, Christopher Ward’s first publicly-available collection of UK Armed Forces watches - which has been inspired by iconic British military watches from the post-war period will be available from October/November 2019. Each of the three Services will have a uniquely designed watch carrying its official insignia and will be available exclusively on the Christopher Ward website.
Christopher Ward has been selected based on its British heritage, enthusiasm for the MOD and ability to deliver quality watches between the £500 and £1000 price-points. “This pricing band is our sweet spot,” said Christopher Ward’s Head of Marketing, Helen McCall.
Christopher Ward’s 10-year history of making private, bespoke short runs for individual units within the Royal Navy, British Army and Royal Air Force testifies to the trusted quality, affordability and accessibility of its collections.
“Approval to use the important insignia and heraldic badges of the UK Armed Forces on watch designs made for public purchase is a great privilege for us. We are very excited to share our military work with the public. The UK Armed Forces are renowned worldwide and the new partnership provides a huge new platform for our brand to develop,” said Mike France CEO and co-founder of Christopher Ward.
A spokesperson for the MOD commented, “The MOD is pleased to have its fifth watch licensee join its growing UK Armed Forces Licensing programme, producing a range of products to raise awareness and understanding of the single Services through a range of quality products.”
The watches will be available exclusively at www.christopherward.co.uk