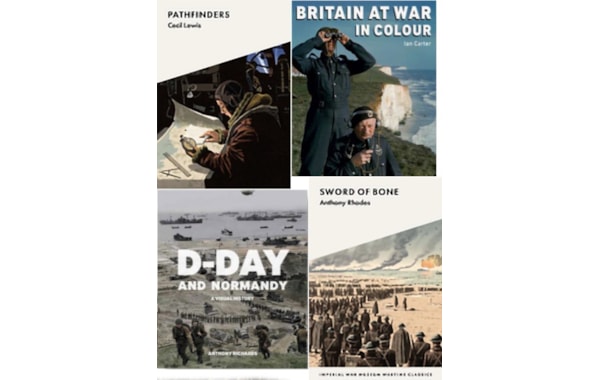 Imperial War Museums’ (IWM) Wartime Classics fictional series will see two new titles published this May, bringing the series up to 10 books in total. Pathfinders by British fighter ace and founding executive of the BBC, Cecil Lewis, tells the story of the men thrown together as they set out to raid a German target, while Sword of Bone recounts author Anthony Rhodes’ own experience in the Phoney War and subsequent retreat at Dunkirk. Also set for release this spring is the visually breath-taking Britain at War in Colour, combining never-before-seen and bestselling photographs from IWM’s collection, and the paperback of a visual history of D-Day, previously featured on BBC1’s The One Show.

From the author of the classic aerial combat novel, Sagittarius Rising, this story follows the fate of six men, thrown together by chance from different corners of the globe, as they set out to raid a target in Germany in 1942. Forever bound by the dangers they face, Lewis reveals the lives of these individuals and the innermost secrets that are locked in their hearts as they face the stark realities of war.

Sword of Bone by Anthony Rhodes (publication date 20 May 2021)

Anthony Rhodes presents a fictionalised account of his own experience in the British Army through Sword of Bone. Having been sent to France in September 1939, Rhodes’ recounts the minutiae of life during the Phoney War, where conflict seemed a distant prospect, before being faced with a desperate and terrifying wait for evacuation during the retreat from the beaches of Dunkirk in the spring of 1940.

New for spring 2021, Britain at War in Colour showcases 100 of the best rare, original colour images from the IWM photograph collection. This beautiful hardback brings rarely seen images together with the most striking photographs from the bestselling collections, The Second World War in Colour (2017) and War in the Air (2019). A powerful and visually impactful volume which brings World War II to life.

D-Day and Normandy: A Visual History by Anthony Richards (publication date 27 May 2021)

Originally published in 2019 to mark the 75th anniversary of D-Day, this highly illustrated book is now available in paperback. Drawing on artefacts, documents, interviews and photographs from IWM’s archives and featuring first-hand accounts of the action, this book gives the reader an insight into what it was like to live through one of the most challenging and risky military operations in history.

All titles will be available to purchase from the IWM online shop.