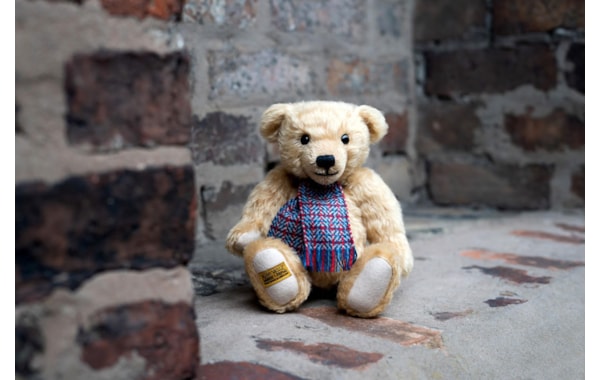 Britain’s oldest remaining teddy bear manufacturer, Merrythought, has collaborated with SSAFA, the Armed Forces charity, to create a teddy bear which will raise vital funds for members of the armed forces and their families.

The beautifully British-made collectable teddy bear, named James after SSAFA founder, Major James Gildea, has been specifically created during Merrythought’s 90th anniversary year to support the great work done by the charity.
Fourth-generation Managing Director, Sarah Holmes has said the partnership is close to everyone’s hearts at Merrythought. “My grandfather, Trayton Holmes, proudly served in the Royal Air Force during World War II, and Merrythought helped with the war effort, making various textile items such as gas mask covers, kit bags, and clothing. After returning home to Shropshire after the war, Trayton went on to become Managing Director of Merrythought,” said Sarah.
“Being able to support such a remarkable charity in the year we remember 75 years since VE Day is a true honour for Merrythought, especially as we celebrate our own milestone 90th anniversary this year, too.”
James Bear has been crafted from soft sandy-gold mohair plush and features pure wool felt paws. His nose and smile have been carefully hand-embroidered to give him a truly unique, friendly character. The special finishing touch is his pure wool tweed scarf, which has been exclusively woven in England to subtly incorporate SSAFA’s red and blue brand colours.
Rebecca Keaveney, Head of Commercial Operations at SSAFA, the Armed Forces charity said, “We are delighted to be working with Merrythought on this special edition bear. This is a significant year for SSAFA as we celebrate our 135th year of supporting the military community in need – and also commemorate 75 years since VE Day.
“It is fitting for both of these special occasions that Merrythought has created a bespoke bear, named after our founder, that can be treasured for years to come. We hope that these bears will be passed down through generations ahead, along with the knowledge that the purchase of each one has made a difference to our Nation’s Armed Forces family."
James Bear has been made to a limited edition of only 1885 pieces, to reflect the year SSAFA was founded, and is presented in a special edition premium cotton drawstring bag.
The teddy bear is priced at £125 and will be available from merrythought.com and other Merrythought stockists from 2 April 2020. Up to £12.50 for every James Bear sold will be paid in support of the charity.