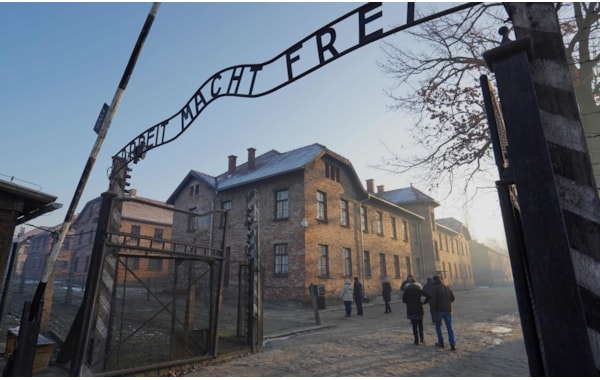 Some 200 survivors of the Nazi extermination camp are gathering today to mark the 75th anniversary of its liberation.

Elderly survivors, supported by children and grandchildren, are today gathering at the site of the former death camp in Poland where Polish President, Andrzej Duda and head of the World Jewish Congress, Ronald Lauder, will be leading the commemorations. The Ukraine's President Volodymyr Zelenskiy is also expected. A number of world leaders met just last week in Jerusalem to mark the anniversary as well. Those attending that ceremony included Russian President Vladmir Putin, US Vice President Mike Pence, French President Emmanuel Macron and Prince Charles representing the UK. Tensions between Poland and Russia resulted in the Polish President boycotting the even in Israel. Putin controversially claimed that Poland played a role in starting WWII, though the reality is that Germany and the Soviet Union carved it up between them.
In order to concentrate on the victims of Nazi genocide Ronald Lauder commented on Sunday, “This is about survivors. It's not about politics.” He added that world leaders must do more to fight anti-Semitism, even if that meant creating new laws to combat it.
Also on Sunday, Pope Francis appealed for remembrance of the Holocaust saying that, “In the face of this immense tragedy, indifference is not admissible and memory is due.” Speaking to those gathered in St. Peter’s Square for the Angelus Prayer, the Pope recalled that 27 January, marks the 75th anniversary of the liberation of the Auschwitz-Birkenau extermination camp. He added, “Tomorrow we are all invited to set aside a moment of prayer and recollection, saying in our hearts: never again!”
There were three main sites to Auschwitz, the original concentration camp called Auschwitz I, a combined concentration and extermination camp called Auschwitz II-Birkenau, built three miles away, and a labour camp called Auschwitz III–Monowitz. There were over 40 sub-camps in the surrounding area, with the whole vast complex surrounded by barbed wire. It was in Birkenau, which held 90,000 prisoners by 1944, that the first gas chamber was made operational in March 1942. It is estimated that around 1.3 million people were sent to the extermination camp with 1.1 million of those being killed or starved to death. Around 90% of the victims were Jews, the rest being Polish and Soviet prisoners, Romany people and those imprisoned for being homosexual. At the height of the slaughter, around 6,000 people per day were being gassed.
With the war in the east going badly by early 1945, the Germans started destroying the site to conceal their crimes and sent many of the prisoners on a death march westwards. The 7,000 people remaining in the camp were finally liberated by the advancing Red Army on 27 January 1945, which is commemorated as Holocaust Memorial Day.