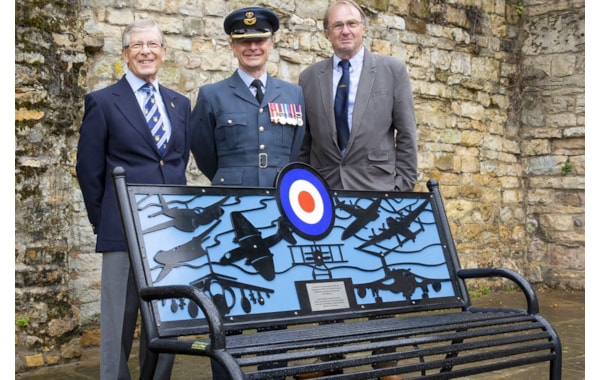 Three striking new benches have been installed in the sleepy town of Stamford, near Peterborough, to commemorate the 100th anniversary of World War I, the Royal Air Force and RAF Wittering.

Local photographer Don Lambert came up with the idea after discussions with the town council and Royal British Legion about how best to mark the anniversaries. After a successful fundraiser, two of the benches have been installed in Castle Dyke, while Stamford Town Council itself came up with the money for a third bench, installed at the war memorial in Broad Street.
Tony Story, the former Mayor of Stamford who served in the RAF before retiring said, “Don and I would like to thank everyone involved for their generosity and support given to help create this permanent memory in Stamford of those who fell in both World Wars and later conflicts, and the special relationship between RAF Wittering and Stamford. It is hoped these visual and tactile reminders of the past century’s conflicts will be seen and used by all age groups including our younger generations acting as a permanent reminder of sacrifices made to ensure our freedom today.”
One of the benches features the traditional RAF roundel, surrounded by silhouettes of planes from various eras, on a blue background.
Group Captain Tony Keeling, Station Commander at RAF Wittering, who was there for the unveiling of the new benches commented, “A big thank you to Don and Tony for bringing this project to life. They’re beautiful designs and I’m certain these benches will be very well used over the coming years. It is an expression of the genuine goodwill the people of Stamford have for the Royal Air Force. That goodwill makes a real difference to us at Wittering.”