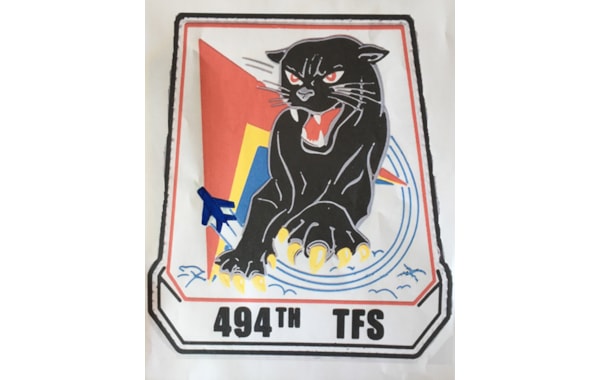 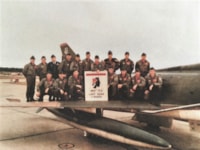 Just before the Covid-19 Lockdown Newark Air Museum (NAM) volunteers started work on the restoration and repainting of the North American F-100D Super Sabre. This particular aircraft is on long-term loan from the National Museum of the United States Air Force Collection Management Division (NMUSAF/MUC); located at Wright-Patterson AFB, Ohio, USA.
This work has been featured widely in the aviation press and this has led to lots of questions being asked about the new markings that will be applied to the aircraft once the repainting work is complete. It had been thought this may replicate the previous Ohio Air National Guard markings, but this is not the case.
Newark Air Museum is now pleased to confirm that the aircraft will be painted in the markings of the 494th TFS (Tactical Fighter Squadron). This unit was the last USAFE Squadron to use the F-100 Super Sabre in Europe, operating with the 48th TFW (Tactical Fighter Wing) at RAF Lakenheath in Suffolk.
Despite the limitations of the lockdown, work is already underway to prepare the specific markings for the aircraft, which will carry the distinctive ‘LT’ code letters and the aircraft’s serial number ‘063008’. As a special honour to the 494th TFS personnel that operated the type a special nose art is also being prepared that will carry the motto ‘Last Huns in USAFE’.
Some final measurements need to be taken to finalise the size of the markings on the aircraft. It is hoped that this can be incorporated into one of the essential site maintenance/security check visits that have continued by Air Museum volunteers during the recent weeks.
In the fullness of time the museum volunteers hope to have some involvement with the 494th TFS, which still flies out of RAF Lakenheath, and the also hope to establish contact with former personnel who operated the type from the Suffolk base.