Flying high at the Victory Show 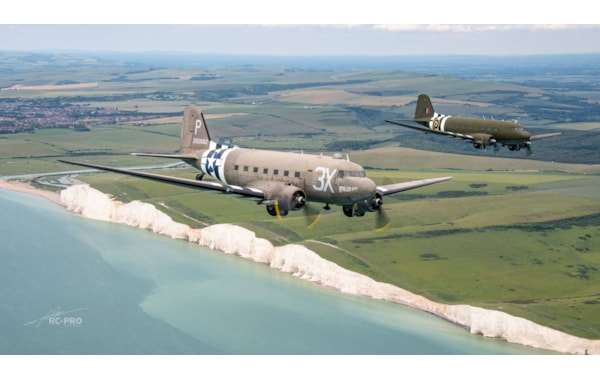 A brace of WWII aircraft have been confirmed for the Victory Show in early September.

The ‘Drag em Oot’ is a Douglas C-47 c/n 19345, and was delivered to the United States Army Air Force on 28 December 1943. It joined operations with 87th Troop Carrier Squadron, based at Greenham Common, equipped as glider pick up, where her crew named it ‘Drag ’em Oot’. The plane participated in the air assault during D-Day when, at 0.46am on 6 June 1944, 18 paratroopers of the US 82nd Airborne Division were dropped just behind the Normandy beach heads, near St. Mere Église. The C-47 returned safely to the UK and after a second mission that very same day, started to resupply the troops in France.

In September 1944 it was transferred to the RAF, designated a Dakota C3 and assigned the British serial number TS422. Once with the RAF it was assigned to Number 1 Heavy Glider Servicing Unit, attached to 38 Group RAF at Netheravon, Wiltshire. The RAF wanted to have a specialist glider recovery unit and TS422 was used to recover Horsa assault gliders from the Normandy beachheads. The unit recovered about 40 Horsas prior to Operation Market Garden.

During Market Garden the Dakota was found to have signs of 12 bullet holes on the top of the cockpit and nose. The damage was presumed to have been caused by a German fighter. The plane was repaired and, in August 1945, joined 435 Squadron of the Royal Canadian Air Force, which had just returned from Burma to the UK.

After the war ended the Dakota left for Canada, where it served with the RCAF as a trainer, a transport and whilst equipped with skis and jato rockets, as a search and rescue aircraft.

Eventually, on its return to the UK the plane was registered N473DC and repainted in the livery it now appears in with the original markings as worn during missions on D-Day 1944 with USAAF serial 42-100882 and coded 3X-P, nicknamed ‘Drag ’em Oot’ then piloted by Bill Allin.

G-ANAF 'Pegasus'
The other plane featuring in the Victory Show was originally delivered to the US Army Air Forces in June 1945 as 44-77104 but was soon transferred to the RAF as a Dakota IV, serial KP220. It spent the late 1940s operating with No. 24 Squadron at Bassingbourn, coded ODA-H, before being retired in November 1950. It was acquired by BKS Aerocharter in June 1953. Sold to Hunting Aero Surveys in 1958, it went to Air Atlantique in October 1977, and was initially used on ad hoc charters until it found more permanent duties on a mail contract from the Post Office. Subsequently selected for radar trials duties, G-ANAF was fitted with a large under-fuselage radome and set to work testing radar systems developed by Racal, and latterly Thales. In recent years it had worn a bright red and black livery, and been operated by the RVL Group. The conversion from radar trials to spraying fit had been undertaken for RVL in 2014.

26 July 2021
Tweets by The Armourer Magazine