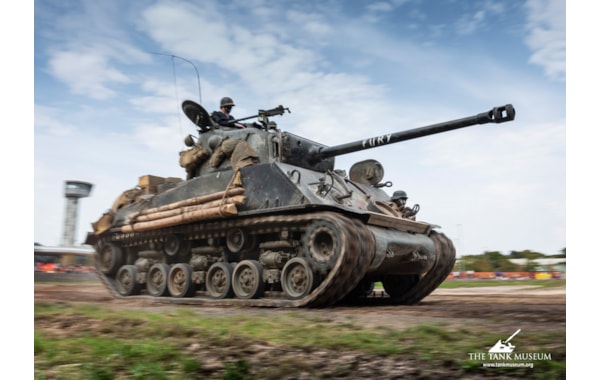 The Tank Museum is offering movie buffs the opportunity to celebrate the Sherman tank in general in a new premium Experience Day.

It’s seven years since The Tank Museum’s Sherman M4E8 graced the silver screen in the title role of David Ayer’s Fury, turning it into one of the popular vehicles in the collection. Head of Marketing, Nik Wyness, said, “Fury is just one of 10 Sherman’s held by The Tank Museum, which exhibits a range of variants telling a story of utility, adaptability, and capitalism’s mass-production approach to the defeat of Nazism. This Experience Day will celebrate the humble, often under-rated workhorse of Allied armoured units and look in more detail at the role The Tank Museum played in the production of the biggest tank-based movie of recent times.”

Participants will hear from Curator David Willey on how the Museum advised the production team and cast - and explore the ethical issues and debates that arose from loaning priceless historic artefacts (including Tiger 131) to a Hollywood production.

The controversy surrounding the historical accuracy of the film will be addressed by the Museum Curator, who will highlight how compromises and difficult decisions were made for the sake of cinematic convenience. Then learn about the history of the Sherman tank itself, from its development to its role on the battlefield, in a lecture from Museum experts.

Armed with a specially produced map, guests will then take a self-guided tour of The Tank Museum to examine the many variants of Sherman tank in the collection. Starting with Michael (The second Sherman off the line and oldest surviving Sherman in the world), you’ll discover a story of utility, adaptability and learn to spot the subtle differences as the design developed.

Finally, you’ll have the chance to see real props from the Fury film set, alongside significant documents and objects relating to the history of the Sherman tank. For fans of Fury and the Sherman, this is an experience not to be missed! Book your place by clicking here.