German defeat in the East 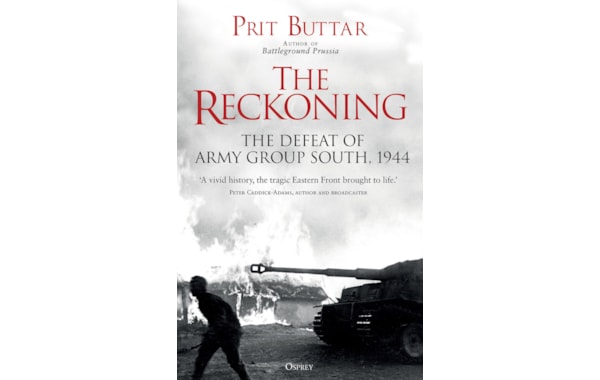 The Reckoning details the defeat of Army Group South in 1944

Prit Buttar’s latest book tells the story of the defeat of Army Group South in 1944 as the Soviet steamroller gathered pace.

From critically acclaimed Eastern Front expert Prit Buttar, The Reckoning is the third book about war in the East and offers a detailed account of 1944 in Ukraine, during which the Red Army evolved from stumbling giant to war-winning machine. This is a story not of how the Germans lost, as is all too often told, but of how the Russians increasingly learned how to win.
The fighting throughout Ukraine and Romania was brutal, with the German defence dogged and desperate. But for too long the Wehrmacht had relied on the superior combat prowess of its fighting men. What had not been taken into account, however, was that the Red Army would not only rely on its sheer size, but would fine-tune its fighting performance from its senior commanders right down to the individual soldier battling to take each line, each trench, each inch of land. In this third installment to his ground-breaking series, Prit Buttar retraces the ebb and flow of the various battles and campaigns of 1944, weaving into the narrative first-hand accounts from German and Russian soldiers, as well as partisans behind the German lines, to offer a powerful retelling of events as they unfolded.
Unlike most conflicts, the history of the Eastern Front has largely been written and shaped from the perspective of those on the losing side – the German generals. The Reckoning, however, offers a balanced re-evaluation of events. In this masterful narrative, renowned Eastern Front expert Prit Buttar examines the often overlooked successes of the Red Army and skilfully unpicks and analyses other myths that surround the moments in which the tide of war was irrevocably turned.