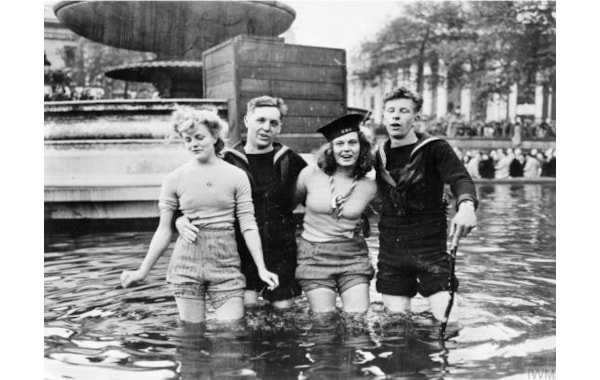 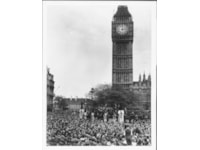 This year, Imperial War Museums (IWM) will bring daily life to a standstill in public venues nationwide to mark 75 years since the end of World War II.

On the 75th anniversaries of VE (Victory in Europe) Day, VJ (Victory over Japan) Day and the dropping of the atomic bombs, IWM will share World War II voices from its unique sound archive on an unprecedented scale, broadcasting them in locations across the UK such as schools, universities, supermarkets, historic landmarks, and transport hubs. Alongside its five branches and partner locations, IWM is also calling on all public venues and organisations interested in broadcasting these voices to register their interest via the IWM website.
Voices of War consists of three separate compilations of excerpts from audio interviews held in IWM’s rich sound archive. This trilogy of unique testimonies reveals personal responses and first-hand memories, from Prime Minister Winston Churchill to prisoners of war and civilians, to the three major milestones that led to the end of World War II. From intense celebration to vast desolation, the 75th anniversaries of VE Day, VJ Day and the dropping of the atomic bombs will allow a 21st century audience to reflect on what victory really meant for people in factories and fields, and in hospitals and homes around the world in 1945.
Voices of War will be broadcast at 3pm on the anniversary VE Day (Friday 8 May), the exact time that Prime Minister Winston Churchill announced end of hostilities in Europe 75 years earlier, and at 11am on both Thursday 6 August, to mark the dropping of the atomic bomb on Hiroshima, and on Saturday 15 August, the anniversary of VJ Day.
Voices of War leads IWM’s Victory 75 programme which will retell the dramatic story of the end of World War II and its global aftermath from 30 April to 15 August 2020. The programme will respond to the question, ‘What does victory mean?’ and will encourage the public to consider the complexity and lasting global impact of the end of World War II.
Diane Lees, Director General of IWM, said, “Voices of War takes inspiration from the huge crowds who stopped and listened together 75 years ago, in public spaces across the world, to the declaration of victory in Europe and then the Far East. We want to recreate that moment, using our fascinating sound archive to share the stories and memories of those who lived through the conflicting jubilation, hope, sadness and fear that was felt during the summer of 1945. I encourage organisations and venues interested in being part of such an important national moment alongside IWM to get in touch with us.”
As part of IWM’s Victory 75 programme, IWM London will also hold a series of live events on Friday 8 May, Saturday 8 August and Saturday 15 August. These performances will be a contemporary response to the end of World War II, a moment that forever changed the world we live in.
Further announcements relating to Voices of War and IWM’s Victory 75 programme will be released in due course.