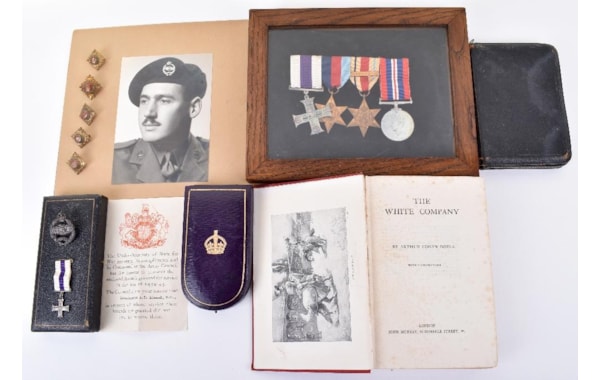 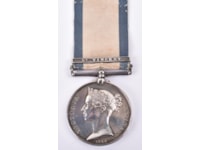 There was a flotilla of medals at the February auction with C & T Auctioneers, starting with a number of awards to the Navy.

First up then, a Naval GSM with a clasp for ‘ST VINCENT’ which was awarded to John Hancock and remains in very good overall condition. John Hancock is confirmed on the roll as an Able Seaman on HMS Britannia, a 100 gun first rate ship-of-the-line. The battle of Cape St Vincent was one of the opening battles of the Anglo-Spanish war of 1796-1908. It hammered for £3,300. The next lot was a miniature, but with a clasp for possibly the most famous naval battle ever, Trafalgar. So, a miniature GSM, clasp for ‘TRAFALGAR’, awarded to Henry Rich, a Midshipman who was serving on HMS Defiance during the battle which captured the Spanish ship San Juan Nepomuceno and the French ship Aigle. It hammered at £1,100. The third navy medal was a GSM with two clasps, awarded Commander Richard Morgan of HMS Tonnant. It came with clasps for ’14 BOAT SERVICE 1814’, of which only 205 were ever issued, and ‘ST DOMINGO’. The award was for action against Americans in the War of Independence and has connections to the American national anthem. It sold for £6,600.
Let’s have a look an unusual Great War Royal Naval Volunteer Reserve Medal pair with League of Neutral Countries Medal, consisting of British War and Victory medals awarded to ‘R.1344 O HICKS A.B R.N.V.R’, bronze medallion showing British sailor shaking hands with Dutch merchant sailors. The medal is housed in its original card case. Accompanied by a quantity of research material. The award of the League of Neutral Nations was for the following action: Lieutenant Commander Hersing in submarine U.21 was heading for home on 22 February when he met a Dutch convoy of eight steamers off the Scillies and sank six of them. In response to a wireless signal from one of them, three of HM Tugs from the newly formed Rescue Service came out from Falmouth and, with the assistance of other vessels, saved two of the steamers. About 200 of the occupants were brought ashore at Penzance. Apparently the convoy had a safe conduct issued by Germany but Hersing was unaware of this. The outcome was that Germany eventually made compensation by transferring to Holland six German steamers then lying in the Dutch East Indies. The lot sold for £700.
Moving on to WWII now and a Battle of El Alamein Casualty Military Cross Medal group of four of Lieutenant AT Almond 46th (Liverpool Welsh) Royal Tank Regiment RAC, consisting of 1942-dated George VI Military Cross (MC), 1939-45 Star, Africa Star with 8th Army bar and 1939-45 War Medal. Accompanied by the original Royal Mint case for the Military Cross, casualty forwarding slip named to ‘Lieutenant AT Almond MC’, bronze OSD Royal Tank Regiment collar badge, miniature Military Cross, tunic rank pips, Holy Bible and presentation book awarded to AT Almond by Bishop’s Sortford College in 1927. The group sold for £1,500.
Let’s combine WWII and that navy theme with the next lot, centred around the siege of Malta. The group of six medals consisted of 1939-45 Star, Atlantic Star, Africa Star, Italy Star, 1939-45 War medal with MID oak leaf and George VI Royal Navy Long Service Good Conduct medal to ‘J.101813 JFE TUBB P.O HMS PEMBROKE’. The medals were mounted on display board along with various items of Royal Navy cloth insignia. Accompanied by a folder of research material. HMS Beryl was an armed trawler, she was heavily involved during the siege of Malta. It is believed that Tubb was mentioned in dispatches for an action against Luftwaffe dive bombers on 29 December 1941. The lot sold for £280.