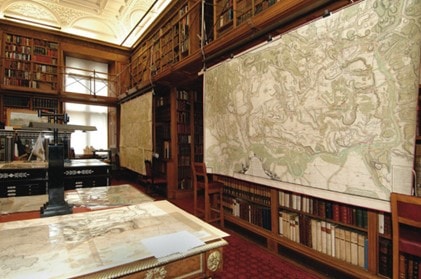 George III’s treasured collection of military maps is published online to mark the 200th anniversary of his death. Highlights include charting the loss of the American colonies and maps by the founder of the Ordnance Survey.

On 29 January 2020, the 200th anniversary of George III’s death, the King’s unparalleled collection of more than 3,000 military maps, views and prints in the Royal Collection will be published online, offering an extraordinary insight into the art of warfare and mapping. The culmination of 10 years of research by Dr Yolande Hodson to catalogue one of George III’s most prized collections, the new website (militarymaps.rct.uk) makes these important documents publicly available for the first time and allows them to be explored in minute detail.
George III’s Collection of Military Maps presents a diverse range of material from the 16th to 18th centuries, from highly finished presentation maps of sieges, battles and marches, to rough sketches drawn in the field, depictions of uniforms and fortification plans, providing a vivid contemporary account of major theatres of war in Britain, Europe and America.
Maps were an important part of George’s early life and education, and his passion for the cartographic sciences continued once he became King. He never left the south of England or fought on a battlefield, but his vast collection of more than 55,000 topographical, maritime and military prints, drawings, maps and charts allowed him to travel the world from the comfort of his library at Buckingham House, now Buckingham Palace. Upon the King's death, his son, George IV, gave his father’s collection of topographical views and maritime charts to the British Museum (now in the British Library), but retained the military plans due to their strategic value and his own keen interest in the tactics of warfare.
Highlights of the collection include 2m-wide maps of the American War of Independence (1775–83). George III took a close interest in every detail of the war, from how many blankets were required by the British forces to the number of cannon in the French fleet. These vast maps were probably hung on purpose-made mahogany stands in Buckingham House, enabling the King to follow the steady erosion of his hold on the American colonies. A map of the final British defeat at the Battle of Yorktown in 1781 is the only known copy to survive outside the USA. An annotation by the American mapmaker marks ‘The Field where the British laid down their Arms’.
In 1766 the Scottish military engineer William Roy wrote to George III proposing a national survey of Britain based on his map and survey experience during the Seven Years War (1756–63). This memorandum, which survives in the Royal Archives, is regarded as the founding document of the Ordnance Survey. The King was very keen on the idea, visiting Hounslow Heath in 1784 to watch the preliminary setting out of a baseline. He also paid for the construction of the Ramsden theodolite, the most accurate surveying instrument of its time. Several unique examples of Roy’s maps from the Seven Years War survive in the Royal Collection and can now be viewed on the website.
As well as purchasing individual items from contemporary mapmakers, George III bought large groups of maps from other collectors. In 1762 he acquired the Paper Museum of the Italian art patron Cassiano dal Pozzo, as part of the collection of Cardinal Alessandro Albani. Among this collection were 500 military prints relating to European wars in the 16th and 17th centuries, many of them unique. A rare engraving of the Siege of Malta in 1565 shows the Fort of St Elmo overrun by the besieging Turkish forces, resulting in the death of 1,300 Christian knights, captains and soldiers.
The King also acquired a major collection of military maps and plans from his uncle, William Augustus, Duke of Cumberland, who led British and allied armies on the Continent during the War of the Austrian Succession (1740–48) and against the Jacobite Rebellion of 1745–6 at home. The first map known to have been commissioned by Cumberland records the Battle of Dettingen of 1743, the last occasion on which a British monarch (George III’s father, George II) went into battle at the head of his troops.
Illustrated maps in George III’s collection provide a glimpse of what life was like for the ordinary soldier in a military campsite – from the catering supplies and makeshift taverns, to the latrines and endless baggage trains. A map of the Siege of La Rochelle during the Huguenot Rebellions of 1627–9 shows a group of soldiers drinking in a tented tavern, with one turning away from the table to be violently sick.
George III’s passion for cartography was matched by his enthusiasm for the military sciences and military education. In 1799 he supported the founding of the Royal Military College at High Wycombe, where young officers were taught topography, surveying and mapping. Examples of their college work can be found in George’s collection, as well as maps made by the King’s seventh son, Adolphus, Duke of Cambridge, while undertaking his military training in Hanover in 1791 aged 15.
Martin Clayton, Head of Prints and Drawings, Royal Collection Trust, said, “It is fitting, and rather moving, that on the 200th anniversary of George III’s death we are able to make the King’s collection of military maps digitally available to all, offering new insight into his topographical interests and his contribution to the cartographic sciences.”