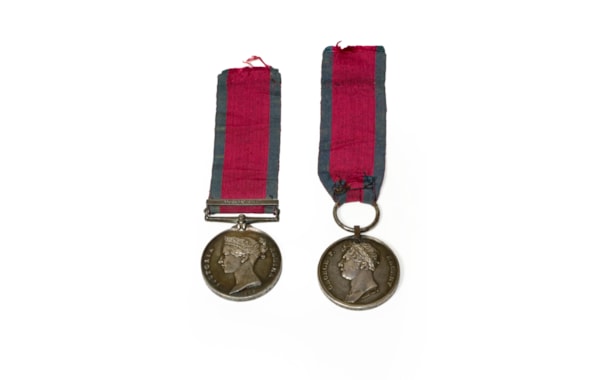 Rare medals awarded to Corporal John Rushton who fought in the Battle of Waterloo are up for auction.

The medals are to be sold in Tennants Auctioneers’ Militaria and Ethnographic Sale on 8 September with an estimate of £4,000-5,000 (plus 24% Buyer’s Premium).  The medals comprise a Military General Service Medal with clasp for ‘Talavera’, and the Waterloo Medal.

John Rushton, a labourer from Elston, Nottinghamshire, was born c. 1792. He enlisted in the 23rd Regiment Light Dragoons in 1808 and went on to fight at the Battle of Talavera in 1809, which took place southwest of Madrid as part of the Peninsular War. The 23rd Regiment was at the forefront of the British attack on the French Infantry, and Rushton was wounded alongside 3,717 of his comrades. He was promoted to Corporal in 1815, and in the same year fought at Waterloo, and he is listed on the Waterloo Medal Roll. He was discharged in 1817 when his regiment was disbanded, was admitted as a Chelsea Pensioner in 1853 at the age of 61 and died in 1866.

Tennants’ Militaria Specialist said of the medals, “It is rare to have a pair of such medals, as they are often split up and sold separately, and as such they will be of great interest to collectors. Corporal Rushton served with the 23rd Regiment of Light Dragoons which is well known to have suffered great casualties at Talavera, only 252 men of a total of 459 survived. Corporal Rushton was one of those rare survivors and was one of 100 of his regiment to receive the ‘Talavera’ clasp for the Military General Service Medal.

Whilst the complete history of the medals is unknown, the vendor believes that the medals came into his family through his great-great-great grandfather who owned an auction house in Newark, Nottinghamshire. Corporal Rushton was from near Newark, so it is possible that he put his medals in for auction to raise money when he was pensioned off injured.