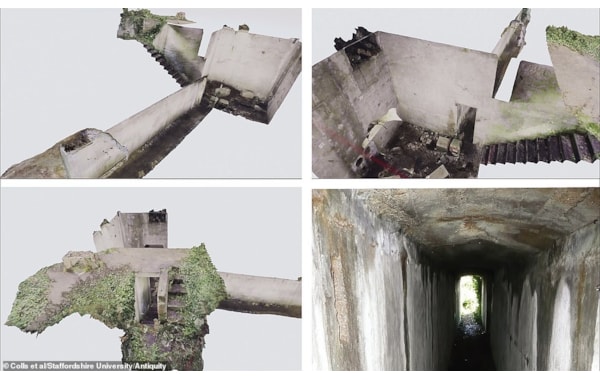 The newly discovered tunnel linking the camp to outside 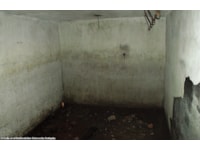 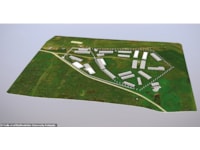 The secrets of a Nazi concentration camp from WWII on the Channel Island of Alderney have been revealed thanks to ground-penetrating radar.

Alderney was home to the only concentration camps on British soil during the war and the remains of more than 30 structures have been exposed by archaeologists using ground-penetrating radar at the most notorious, called Sylt. The researchers from Staffordshire University used non-invasive methods and were able to identify and map key features of the camp and show how it expanded from a small forced labour camp run by Organisation Todt, to a fully-fledged Nazi death camp under the control of the SS.
Some 32 features were discovered in total with four boundaries, five buildings for SS soldiers, two for the Commandant himself and 21 for the prisoners. One of the new discoveries at the site of the death camp, which was taken over by the SS in 1943 and run until being destroyed by them in 1944, was a tunnel from the soldiers’ bathhouse, below the barbed wire fence and into a villa outside of the camp that was occupied by the camp’s Commandant.
The camp was divided into two separate compounds by a stone-covered wall and gateposts, with one for the prisoners and the other for the SS guards. There was also a central square for roll call. A toilet block with bathhouse, stables and kitchen, with accompanying subterranean cellar, were some of the structures in the prisoner's area. The explorations revealed the foundations of the site’s canteen, guardroom and workshops as well as both the prisoner and SS barracks, the sickbay and the construction office. Sentry posts, gateposts and the remnants of the camp fences appeared as lines on the radar map.
Professor Sturdy Colls, who led the study for Staffordshire University, which was published today in the journal Antiquity, commented, “This work has shed new light on the German occupation of Alderney and, crucially, the experiences of the thousands of forced and slave labourers who were sent there. Historical, forensic and archaeological approaches have finally offered the possibility to uncover new evidence and give a voice to those who suffered and died on Alderney so many years ago.”