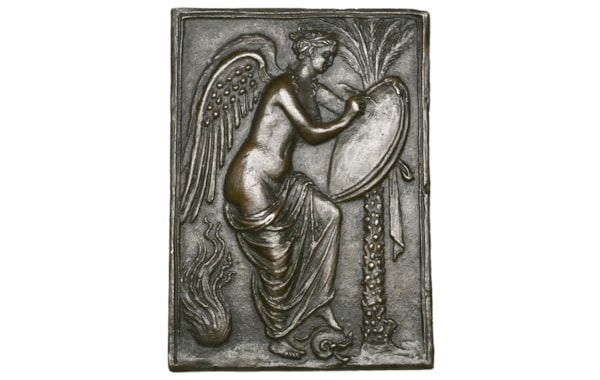 An important 16th century Renaissance plaqueyte is one of the highlights of Morton & Eden’s forthcoming sale of Coins, Medals and Banknotes on 4 November 2020.

An important early 16th century Renaissance plaquette, depicting Victory inscribing a Shield, has recently been re-attributed to the renowned Italian Renaissance sculptor Antonio Lombardo (c. 1458–1516), and is one of the highlights of Morton & Eden’s forthcoming auction.
Tom Eden, of Morton & Eden, said, “This, hitherto, virtually unknown plaquette is believed to be the only known casting of this subject. Its recent attribution to the Renaissance artist Antonio Lombardo, the court sculptor of Alfonso I d’Este, Duke of Ferrara makes it an exceptionally exciting new art historical discovery.”
The bronze rectangular plaquette is small, measuring only 50.8mm x 36.2mm, and depicts, in exceptionally fine relief, a standing winged figure of Victory. Victory is shown, one foot resting on a helmet, inscribing a shield set upon a palm tree, with a flaming artillery projectile behind her. It is estimated to fetch £40,000-£60,000.
Although the plaquette was known to be in two highly distinguished French collections during the 19th and early 20th centuries, at that time scholars could not shed much light on who it was executed by or why.
Morton & Eden recently consulted Dr Jeremy Warren, Honorary Curator of Sculpture, Ashmolean Museum, Oxford, and Sculpture Research Curator, The National Trust, a leading specialist in this field. It is thanks to Dr Warren’s subsequent additional research that this significant new attribution can now be proposed.
The source for the image of the plaquette, Victory inscribing a shield, is clearly based on a form found on Roman coins. The same image was also used by another Renaissance sculptor, as can be seen in a similar plaquette attributed to the artist Andrea Riccio (c. 1470–1532).
Although the main figure of Victory is the shared motif, in every other respect this plaquette is quite distinct. Here Victory is depicted nude with the exception of drapery over her lower limbs, and, in comparison to the version by Riccio, this plaquette has an elegant neo-classical feel to its execution.
It is, however, the flaming artillery projectile shown behind Victory that provides the most conclusive evidence to support the re-attribution. In all likelihood the subject of the plaquette was a direct allegory of the victory of Alfonso I d’Este and the French at the Battle of Ravenna on 11 April 1512. It was at the Battle that Duke Alfonso made use for the first time of a deadly new weapon he had developed, a metal ball filled with an artificial fire, which would explode into flying fragments when it hit its target.
Alfonso was extremely proud of this sophisticated and modern piece of ordnance. Hence the inclusion of the artillery ball in the imagery points to the fact that, in all likelihood, the plaquette was executed c. 1512 by Antonio Lombardo, Alfonso’s court sculptor, to commemorate both the important victory and the introduction of his patron’s lethal new military weapon.
Stylistic comparisons can also be drawn between the wonderfully sinuous and elegant flames of the artillery ball in the plaquette and details in other works by Lombardo - most notably the flaming crucible at the left of The Forge of Vulcan (St Petersburg, Hermitage), and the waves at the foot of Lombardo’s relief of the Venus Anadyomene (London, V&A).
There are no other versions of this fascinating plaquette known to be in existence. Morton & Eden’s catalogue describes it as: ‘Seemingly unique and an extremely fine contemporary cast of high quality.’