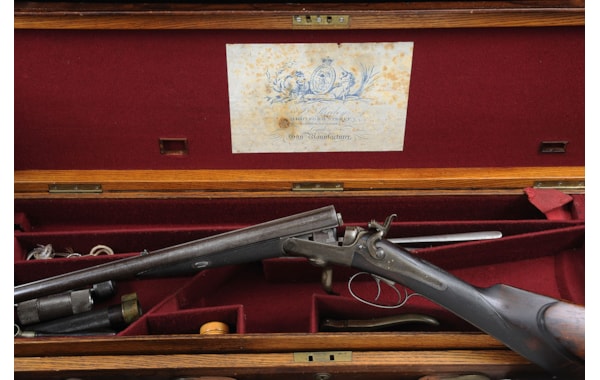 A rare James Purdey & Sons .360 double barrel hammer rifle, built in 1875 for the Prince of Wales’ Indian tour of 1875/6 sold for £10,000 in Gavin Gardiner Limited’s online/live auction of Modern & Vintage Sporting Guns on Wednesday, April 22, 2020. It had been estimated to fetch £8,000-£12,000 and was purchased by an UK private buyer. The rifle was presented to the Nizam of the Decan, the ruler of the state of Hydrabad, in South Central India, by the Prince of Wales on the tour, and is engraved on the rib ‘H.H. The Nizam of the Decan from H.R.H. The Prince of Wales, KG, GCSI 1876’. It carries a gold oval engraved with the Royal crest and the Order of the Star of India. It was in its original makers case with the Nizam’s name on the lid.

As Gavin Gardiner explained, “In October 1875, Albert Edward Prince of Wales, the eldest son of Queen Victoria, embarked on an extensive tour of the Indian subcontinent. Here the Prince visited more than 21 towns and cities before returning to England in May 1876. British monarchs and members of the Royal Family undertook lengthy tours to strengthen ties with other countries, and also to learn more about the culture and history of those regions. The Prince of Wales’ tour of India was envisaged as a way of forging diplomatic links between the Indian rulers and the British Crown. The Prince exchanged gifts with each ruler he met and a number of rifles were ordered from Purdey as well as Alexander Henry to be given as gifts during the tour. Purdey’s records indicate that two rifles were presented to the Nizam, the other is now in the collection of the Royal Armouries.”

Elsewhere in the sale was a pair of 12-bore single trigger sidelock ejector guns by Boss & Co, which the maker confirms were built in 1921, which sold for £7,500 against an estimate of £5,000-£7,000. They were bought by a European private buyer.

Also of note was a scarce 16-bore side lever hammer gun by Stephen Grant sold for £6,875 against an estimate of £3,000-£3,500. The gun had a 30in damascus barrel and the maker confirms that the gun was built as the No. 2 gun of a pair, it was bought by a USA private buyer. Selling for the same price of £6,875 was a pair of 12-bore sidelock ejector guns by F. Beesley that had been presented to Richard W.G Welby on his coming of age in 1909. They were estimated to fetch £5,000-£7,000 and were bought by an overseas private buyer.

Among the Continental guns was a 12-bore S3 EELL model single trigger sidelock ejector over and under gun, a three barrel set, which sold for £6,250 to an Australian private buyer against an estimate of £5,000-£7,000.