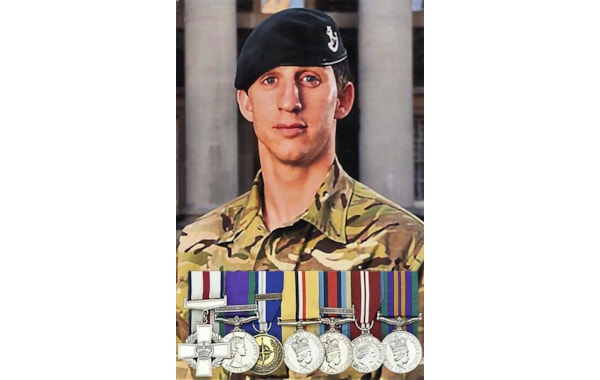 The actions by Colour Sergeant Deacon Cutterham that led to the award of the Conspicuous Gallantry Cross have been disputed by fellow soldiers.

The CGC, which was awarded for an action in Afghanistan in 2002, is up for auction at Dix Noonan Webb this week, along with several other medals of Colour Sergeant Deacon Cutterham. However, several former soldiers in 1 Battalion, The Rifles (formerly Royal Gloucestershire, Berkshire and Wiltshire Regiment) told BBC News that they disputed his version of events. Col. Sgt Cutterham was on patrol near Tabila Village, Nahr-e-Saraj District, on May 24, 2011 and recalled, “It was then I heard a familiar ping noise and knew exactly what it was, I looked up and in slow motion I could see a hand grenade which had been thrown from the other side of the wall and landed roughly a metre in front of me.” He described his reaction, “With that I shouted ‘grenade’ and then advanced on it, picked the grenade up and then posted it, and it literally went off as soon as I pulled my hand away - and prevented me and my lead scout from getting serious injuries or death.”

However, in another account of the incident he said the grenade had landed in a water-filled ditch and then, “I had seen exactly where it had landed but couldn't see it in the stream. I quickly placed my hand in the water to search for it and placed my hand directly on the grenade, shouted to take cover and posted it.”

Following his report on the patrol, he was recommended for the award by his Commanding Officer and a few months later was told in person he had been awarded the CGC for his actions. Cutterham added, “Roughly a year later, I was presented with my medal at Buckingham Palace by Prince Charles in front of my family.”

Now, with the medals set to fetch up to £120,000 when sold at auction, his former colleagues are calling his actions into question. One said, “I don't believe he earned that medal and now he might make money from it.” Another added, “If you have a medal it makes you look good; it makes the commanders look good.”

The other patrol members do not dispute that a grenade went off, they all heard an explosion. However, no-one on the patrol has backed up Cutterham’s account. One soldier said, “We believe a grenade was thrown, but it was his.” Another, who said he carried out an equipment check when the patrol returned to base said, “There was one grenade missing.” Also, the BBC has reported that they were told by several sources that a drone flying above the patrol saw no sign of enemy activity in the area or even any individuals nearby.

Several of the soldiers who spoke to the BBC said they raised concerns about the action at the time, but were told they were only doing so because they disliked Col. Sgt Cutterham. For his part, Cutterham made a statement by email: ‘I'm extremely disappointed that people are questioning the events of that day. I strongly deny these claims.’