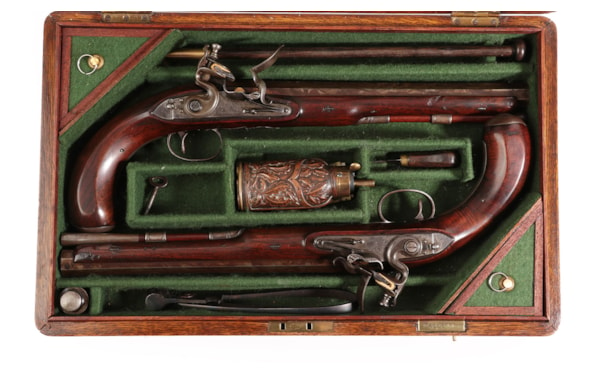 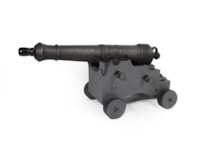 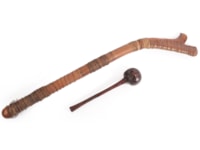 Rare flintlock and percussion pistols are set to star in Tennants Auctioneers’ sale of Militaria and Ethnographica on 8 July.

The auction features a good pair of 18th century flintlock duelling pistols by Wogdon and Barton leading the way with an estimate of £14,000-£16,000 (plus buyer’s premium). Robert Wogdon was a renowned gunmaker in London, famed for making the finest duelling pistols; he partnered with John Barton later in his career. The pistols come with provenance from Charles Bennet, Earl of Tankerville of Chillingham Castle, from whom they were purchased by a friend of the present vendor’s father. The initials ‘CB’ are engraved on a plaque to the original Calcutta made oak case.
From the same vendor comes a further good pair of 19th century flintlock ‘Man-Stopper’ travelling pistols by W & J Rigby of Dublin (estimate £9,000-£12,000). An engraved brass plaque to the case reads: ‘To Sir Mathew Slater, King’s Messenger to King George The Third. Travel Safely My Friend, Captain Nathaniel Mcbride’, and the pistols come with provenance from Vice Admiral Sir Roderick Macdonald. A third pair of 19th century percussion duelling pistols from the same vendor, this time made by John Manton & Son, London, are estimated at £8,500-£9,500. This pair were originally the property of Baron von Arnsdorf of Germany and survived a bombing raid during World War II when they were buried under rubble.
Further interesting armaments in the sale include a 1795 cast iron one pounder cannon (estimate £2,500-£2,800) and a World War I prototype model of a Coastal Defence Gun, made in 1915 and submitted to the Ministry of Defence for Approval (estimate £2,000-£2,500). An Edwardian full dress part uniform to 2nd Lieutenant Cecil Foster of the Yorkshire Hussars is also of note, which is being sold with an estimate of £700-£1,000.
In the Ethnographic section of the sale, highlights include a late 19th century Fijian Ula or throwing club, inset with a single human tooth (estimate £600-£800) and a 19th century Fijian gun stock war club (estimate £600-£800).
A fully illustrated catalogue is available at www.tennants.co.uk.