Rare tank books to be republished 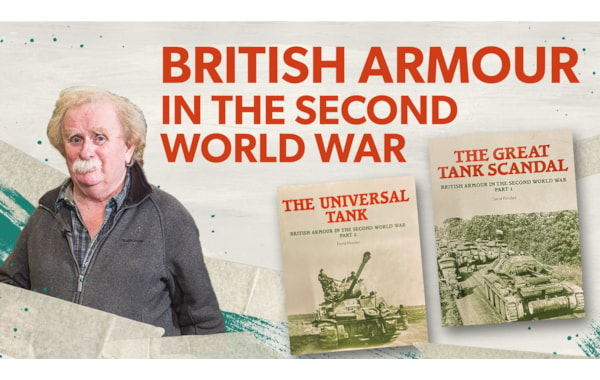 Over 600 backers supported the campaign to republish two of David Fletcher’s iconic books on tank warfare – The Great Tank Scandal and Universal Tank, originally published in 1989. Both editions will be reissued with David Fletcher’s original text, complete with rescanned high-resolution images.

Initially a target to sell 150 editions was needed to secure publication, which the Museum expected to achieve over the period of a month. However, less than 24 hours after starting the campaign, 600 people had bought this special signed double-edition and the numbers had to be capped.

Following the success of this campaign, The Great Tank Scandal and Universal Tank are now available to pre-order for £29 on The Tank Museum Online Shop.

Museum Curator David Willey said, “These books offer a critique of the military authorities, industry and government, all presented in David’s unique and witty style. In Volume 1 - The Great Tank Scandal, he looks at the confusion and indecision that left Britain seemingly unprepared the threat of Nazi Germany.
“In Volume 2 - The Universal Tank, he examines the lessons learned from combat, which ultimately gave rise to one of the most successful tank designs ever – the Centurion. And they have stood the test of time well – which is why a signed set has recently been offered for sale for over £200.

“David Fletcher is a leading authority on the history of British military vehicles and this collection is a must have for die-hard tank aficionados.”

This latest success in publishing, follows the Museum’s recent appeal to crowdfund the first English translation of the wartime German Panther-Fibel. This too was achieved within days of being launched and The Tank Museum is now looking to republish more out-of-print tank books.