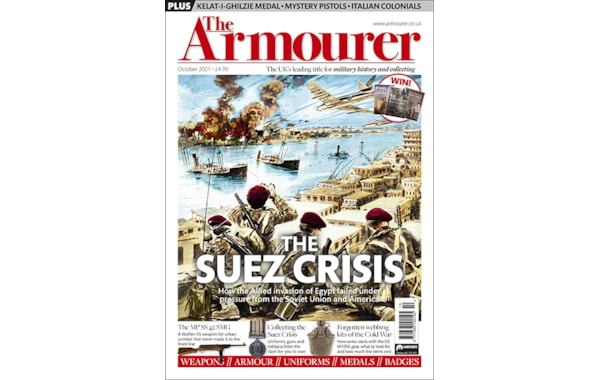 Editor Duncan Evans talks through what you can come to expect from reading the latest issue of The Armourer. On sale in most good newsagents 01.09.2021

REGULARS
Welcome
What the Editor has to say about this month’s issue as we look at the post WWII conflict that ended with Britain and France backing down under pressure from the new superpowers.

News
What’s happening in the world of militaria, museums, exhibitions, collections and events. There’s a new film to look out for, new exhibits at Newark and the Tank Museum and some cancellations.

EVENTS
In the sale rooms
Discover what’s coming up for auction with air force items at Bosleys and Peninsular War and Waterloo medals at Tennants.

The Household Cavalry
Kerry Culbert gets on her high horse with a trip to see the Queen’s bodyguards, the museum and stables in central London.

Under the hammer
Let’s have a look at what’s gone under the hammer in auction rooms, with medals, badges, buckles and bizarre items at C&T; Battle of Britain medals and log books at DNW; and German medals and headgear at Ratisbon’s.

FEATURES
US M1956 web gear
In the first of a new six part series looking at the accoutrements of the NATO Allies in the Cold War, Edward Hallett looks at the ubiquitous US M1956 set.

Third Reich civilian daggers
In the fourth part of this series on bladed dress weapons, John C Pursley describes the daggers used by the numerous domestic civil administrations in Germany.

Victorian military paintings
Ray Westlake looks at a selection of prints and paintings by Richard Caton Woodville, one of the premier artists of the British Victorian Army.

Collecting the Battle of Omdurman
It’s off to the heat of the Sudan as Edward Hallett looks at what militaria is available to collect for this fascinating campaign that saw Kitchener avenge the death of General Gordon of Khartoum.

The Earl's holster pistols
Neil Melville investigates the puzzle behind a pair of flintlock pistols that are fine examples and absolutely typical of top quality English holster pistols of the early 18th century.

The SMG gun of the Waffen-SS
Michael Heidler examines how the Waffen-SS tried to develop a weapon to rival the Russian PPSh41 but in-fighting scuppered production.

The defence of Kelat-i-Ghilzie, 1842
The Afghan War of 1839-42 established the basic principle that British soldiers would receive basic war medals to reward and commemorate their campaign service.

Italian Colonial troops in Eritrea
Gabriele Esposito describes the composition and organisation of the Italian colonial forces that fought in Eastern Africa during 1935-1941.

Photo Inspector
Ray Westlake looks at the uniforms and insignia of five officers of the Special Reserve which was made up of civilians who had undertaken to attend regular training camps.

COVER FEATURES
The Suez Crisis
Graham Caldwell examines how Britain’s tactical success during the Suez conflict was let down by political and strategic failure, ending her role as a world superpower.

Collecting Suez
Ed Hallett  scours dealers in search of items of militaria related to the Suez Crisis for you to collect. There’s everything from medals and uniforms to weapons.

SIGNALS
Militaria reviews
Duncan Evans takes a look at the latest releases including puncturing the Spartan myth in The Bronze Lie, getting inside The 4th Waffen-SS, the history of the Navy SEALS in By Water Beneath the Walls and the early life of Prince Philip.

Your Letters
Your comments on what you’ve been reading and doing. This month we’re discussing sinking the Bismarck, a dodgy photo, Vietnam medals and new book.

Auction & Fair Diary
Lockdown has now officially ended with restrictions lifted, so check out the online arrangements for the auctions where you can top up your militaria collection and what fairs will be opening.

Competition
Thanks to our friends at Pen and Sword with have two prize bundles up for grabs with two winner each receiving a copy of Philip Prince of Greece, Waterloo Witnesses and Resistance Heroines in Nazi & Russian Occupied Austria.