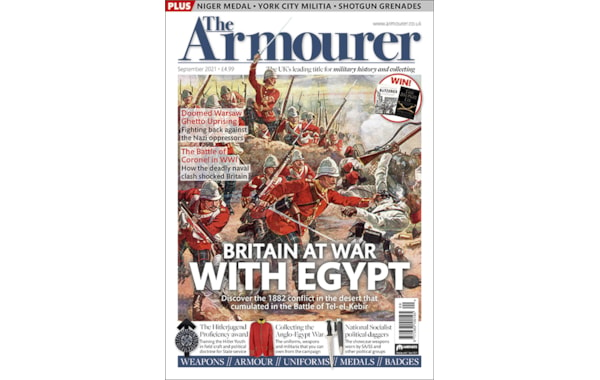 Read the story of the Anglo-Egyptian War as Britain sought to secure its colonial possessions and install a puppet ruler in the desert.

Anglo-Egyptian War – With a nationalistic Egypt threatening the Suez Canal and Westerners living in the country, Britain decided to intervene and sent a sizeable military force to the desert.
Displaying your collection part 2 - Time to look at the various means of showcasing your collection, from cases and stands to special mounts.
Third Reich political daggers – The dress edged weapons of political organisations are revealed.
Hitler Youth Proficiency Badge – The award design to encourage physical fitness and political adherence to the Nazi doctrine.
The Battle of Coronel – Trouble in the South Atlantic as an underpowered British force runs into German raiders.
Shotgun grenades of the Volkssturm – Last ditch plans to add grenades to the shotguns of hunters.
Muskets of the York City militia – The Jacobites are coming! Panic sets in and the good folk of York pay for an armed militia to protect them.
The Warsaw Ghetto Uprising – The final solution to the problem of the remaining Jews in Warsaw leads to a brave, but doomed, uprising.
The Niger medal – British trade companies led the way with medals awarded those in the dark continent.
MBG: Double action weapons – Why fire just one barrel when you can fire multiple shots at once?
Print Inspector – Two chaps on the way to a village store come under the eagle eyed gaze of Ray Westlake.
Collecting militaria from the Anglo-Egypt War – What items are our there for you to collect, from ephemera to weapons, medals to uniforms.