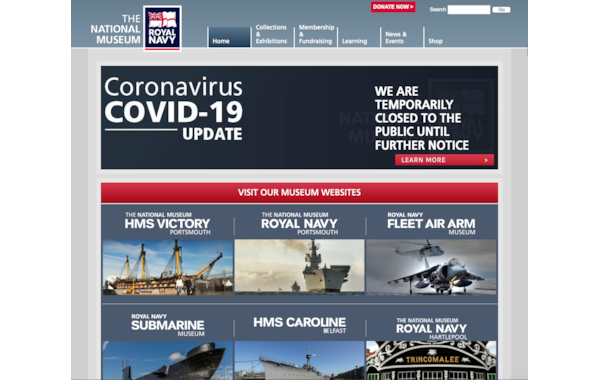 Emergency funding from the Treasury will mean the National Museum of the Royal Navy stays afloat.

The National Museum of the Royal Navy (NMRN) has announced that it will receive emergency funding from Her Majesty’s Treasury, in response to losses incurred by its enforced closure, because of the Coronavirus crisis. The Museum - which without this support would have had to declare itself insolvent within the next month – can now begin the investment it needs to remobilise its sites in Portsmouth, Gosport, Hartlepool and Yeovilton and will be making announcements about dates for reopening, in the coming weeks.
NMRN will not, however, be able to open its site in Belfast as HMS Caroline is governed by a different funding model via the Northern Ireland Executive. They have chosen to keep the ship closed for the remainder of the year, something the NMRN is still vigorously campaigning to avoid.
Dominic Tweddle, Director General for the NMRN said, “I cannot express the relief we all felt when were told that additional funding would be made available to us. It has been incredibly difficult over the last weeks and months with so much uncertainty around the future of the Museum. We are incredibly grateful to HM Treasury, MOD and the Royal Navy for all of their support and also to all of those who have advocated on our behalf. We are still liaising with the Department for the Economy in Northern Ireland to see if we can come to an agreement which will also offer HMS Caroline a more certain future.”
Many UK National Museums receive between 60% and 80% of their total funding from central government. Whilst the NMRN is a National Museum and holds an internationally recognised collection, only 19% of its funding is provided by the UK Government with the remaining 81% having to be self-generated. This is means that unlike its peers at the Imperial War Museum, National Army Museum or Royal Air Force Museum; NMRN is not able to offer the same access to its collections through free entry; and is dependent on the income it makes, primarily from admissions. It is therefore more akin to the Independent Museum sector, many of whom have been vocal about their dire financial vulnerability.
Reflecting on this, Dominic said, “Whilst we are relieved and grateful for the support we have received, we do need to reflect on, and address for the future, what has left us in this financial position. Other National Museums are funded to a level that enables them to offer free access to their permanent collections whilst building in additional income opportunities.
However, NMRN is not funded sufficiently to offer the same access, we are disproportionality dependent on the generosity of donors and our admissions income just to survive. This was particularly evident when our museum colleagues, were able to welcome back visitors from the 4 July, whilst we were not even able to confirm if we would reopen at all. I simply cannot see why the historic ships and collections we care for, are not treated with the same significance as those in the care of our National Museum peers. Is our naval history not of equal value?”

31 July 2020
Tweets by The Armourer Magazine