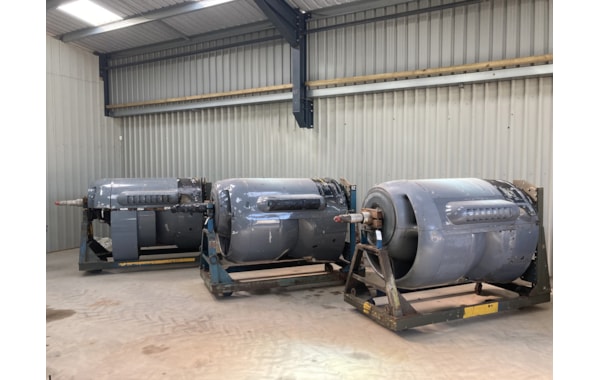 Seven Rolls-Royce Griffon engines, used in RAF bombers, will go under the hammer with Cheffins, from 11 November until 18th November.

Sold on behalf of Kevan Whittingham, from Team Whittingham, the British champion tractor pullers, the engines have been collected over a number of years, one of which has never been used and could sell for in excess of £70,000. The engines, which measure on average 10ft long and 4ft wide, have over 2,500hp and weigh over 1t each. The engines were fitted to Shackleton bomber planes which stayed in service with the Ministry of Defence from 1949 until 1991, after replacing the wartime Lancaster bomber.

Mr Whittingham, 58, who is also a Lancashire-based farmer, commented, “It was my love for the motorsport which really kicked off my enthusiasm for these engines. I bought them from various places, not only from the Ministry of Defence. I always had a fascination with World War II piston engines of which the Rolls-Royce version really are the best in class. These engines are really very rare, and this is an unusual opportunity for someone who wants to perhaps put these back into a plane, or into a boat or car or use them for motorsport. Through the tractor pull world we have had lots of people interested in the engines which I have had stored in the barn since the early 1990s, however they are big old brutes and you need the capability to move or store them. We have carefully preserved these important pieces of RAF history and it’s been a fascinating journey so far, but I now own more than enough engines and spares and it’s time for someone to be able to get enjoyment for them, or even buy them as an investment. As there aren’t any more being made and they are a real rarity.”

The sale will take place online at www.cheffins.co.uk from 11 November until 18 November, with a viewing day on Friday 12 November, near Preston, Lancashire.

22 October 2021
Tweets by The Armourer Magazine