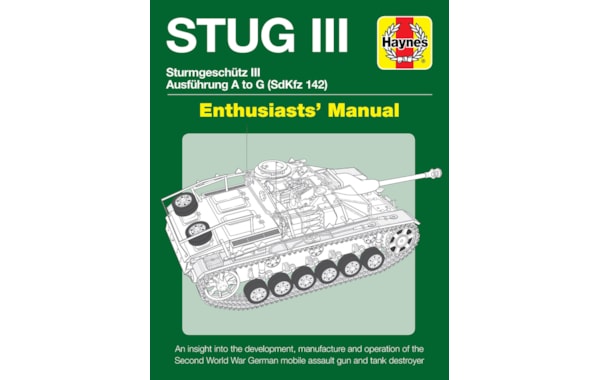 The StuGs were a successful and cost-effective range of armoured fighting vehicles, of which more than 10,000 were built during World War II. Now Haynes has saluted its immense fighting power with the new StuG III Enthusiasts’ Manual.

With a focus on one of the last surviving StuG III Ausf Gs on display in the Tank Museum at Bovington, the manual charts the StuG’s extensive use on all battlefronts. The StuG III has a long history as a formidable armoured fighting vehicle, from the invasion of France in 1940 to its twilight years in the Middle East wars of the late 1960s.

The book showcases the StuG III in its many variants as it fought on the battlefields of Europe in the first three years of World War II. It’s here that it acquired a reputation as an effective mobile infantry support weapon and tank destroyer. However, it didn’t stop there; the StuG III was constantly modified and when later fitted with the lethal 7.5cm StuK 40 L/48 gun it cemented its reputation as a feared adversary, capable of engaging and defeating any Soviet armour at range, claiming a high number of kills.

Readers can follow in the tracks of the StuG III, ending with the final G model. This went into production in December 1942 and was produced in greater numbers than all preceding models combined.

In the manual, author Mark Healy looks at the development, construction and fighting qualities of the StuG III. He also includes insights into what it was like to operate and maintain, shining a light on the lives of those who experienced it at first-hand. Mark said: “Based on the chassis of the fierce Panzer III tank, the StuG’s success was a result of its brutal and powerful simplicity. It was cheaper to build than a battle tank with a rotating turret, while its low height meant it was easy to conceal. This was an irresistible combination for an economy on a war footing. As a result, more StuGs than tanks were built towards the end of the war – despite the German Army having initial doubts about it.”

The Haynes StuG III Enthusiasts’ Manual joins other military history titles from Haynes from the same author. These include books on the iconic Soviet-era T-34 Tank and its nemesis, the German Panther Tank.