The end of WWII at IWM 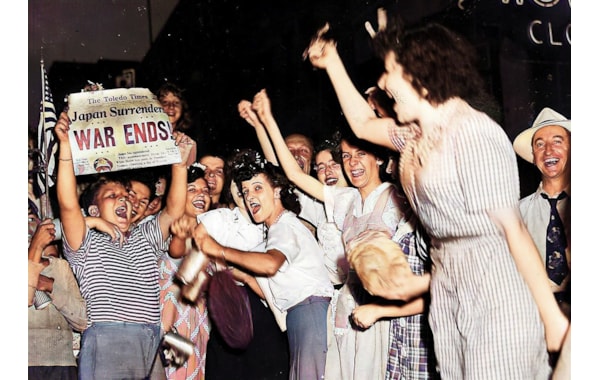 VJ Day as Japan surrenders and WWII is over 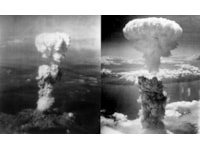 75 years after World War II came to an end on all fronts, Imperial War Museums (IWM) will explore the momentous events through an extensive digital programme.

A highlight of IWM’s programme will be a new digital artwork from contemporary artist Es Devlin, working in collaboration with her long-term studio colleague Machiko Weston, which has been specially commissioned by IWM to mark the 75th anniversary of the dropping of the atomic bombs on Hiroshima and Nagasaki.
IWM’s programme also includes Voices of War - audio compilations from IWM’s rich sound archive. These, together with associated videos and blogs, will invite audiences to question what the end of World War II meant to people around the world.
Diane Lees, Director-General of IWM, said,“The story of the Second World does not finish with what we know as VE Day on 8 May 1945. The world witnesses three more months of intense fighting and the annihilation of the Japanese cities of Hiroshima and Nagasaki by two atomic bombs before the conflict came to a close.
“Through IWM’s programme, we want our audiences to explore beyond how the news of the end of the war was received on the streets of Britain. We are delighted to be working with Es and Machiko to delve deeper into the significance of the dropping of the atomic bombs from multiple perspectives, considering their lasting global impact through art. We hope to enable people to reflect on not just how the Second World War came to an end, but to consider the new world that conflict had created, a world in which the potential consequences of war had changed forever.”
The new commission, The End of the World, responds to the moment the nature and consequences of war were irrevocably redefined, reflecting on the impact of the event from both a British and a Japanese perspective. The artwork will highlight precise moments of destructions within a 10s period – the time it took for the atomic weapons to eliminate both Japanese cities. The work will be released on IWM’s website and social media channels on 6 August, the anniversary of the dropping of the atomic bomb on Hiroshima.
The United States detonated two atomic weapons over the Japanese cities of Hiroshima and Nagasaki on 6 and 9 August 1945, respectively, with the consent of the United Kingdom, as required by the Quebec Agreement. The two bombings killed over 100,000 people directly, most of whom were civilians, and caused thousands more to die of their injuries or the after-effects of radiation. The detonation of these weapons remains the first and only time they have been used in war.
IWM will also be sharing first-hand testimonies of the intense combination of celebration, trepidation and devastation felt during August 1945 from its rich sound archive. Three new instalments of Voices of War, whose VE Day soundscape reached tens of thousands of people in May, will be released on IWM’s website and social media channels to mark the 75th anniversaries of the dropping of the atomic bombs on Hiroshima on 6 August, the bomb on Nagasaki on 9 August and the official end of World War II on 15 August, which was recognised as VJ Day by the Allied nations.
By listening to Voices of War, people can reflect on these momentous events in modern history through the experiences of those who were there, including; a Japanese school mistress who was living and working in Hiroshima when the atomic bomb was dropped; British, Australian, Indian and Chinese prisoners of war; and servicemen and women from all over the world, including the Seychelles and Mauritius.
The voices of witnesses to the end of World War II, such as British Prisoner of War Sidney Lawrence, will encourage people today to reconsider their understanding of what the conflict’s culmination meant to those who lived through it: ‘I remember saying to the Japanese, “What have we done to you?” The tears rolled down his eyes and he said, “What have we done to each other?” And from that moment I felt at one with them.’
The series is available now and free to view on IWM’s website and YouTube channel.
Meanwhile, four of IWM’s five branches will reopen to the public from Saturday 1 August. IWM London, IWM North, Churchill War Rooms and IWM Duxford will welcome back visitors with a revised programme of events, exhibitions and activity throughout the late summer and autumn. Due to the limitations of social distancing on board, HMS Belfast will remain temporarily closed.

25 January 2021
Tweets by The Armourer Magazine