The hunt for Nazi uranium 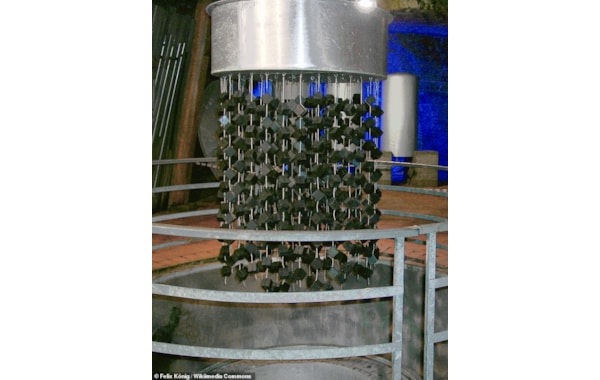 A chandelier of uranium blocks 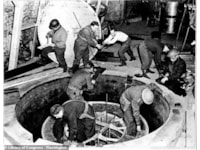 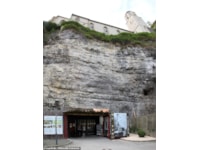 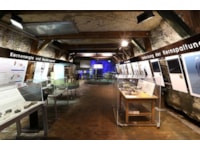 After a radioactive uranium cube was delivered to a Professor in the USA, the hunt for the remaining, and missing, cubes is on.

It sounds like a TV show on the History channel but US academic researchers are actually searching for hundreds of uranium cubes which were intended to power a nuclear reactor being built by German atomic scientists in WWII. The reactor, was dismantled by US soldiers at the end of WWII and its 664 uranium cubes, which had been buried, were shipped to America. From there they disappeared into obscurity.

The quest for the missing uranium cubes started after Professor Timothy Koeth of the University of Maryland mysteriously received one in the post. Accompanying it was a crumpled note, which read: ‘Taken from Germany, from the nuclear reactor Hitler tried to build. Gift of Ninninger.’

Robert Nininger (the note spells his name wrongly) was an expert involved in the Manhattan Project, the US programme that developed the first atomic bomb. According to his widow, Robert Nininger did once own a uranium cube but he passed it on to a friend. The researchers believe that the cube probably changed hands a number of times before finding its way to Professor Koeth’s desk.

Since then Prof Koeth has been working with fellow Maryland researcher Miriam Hiebert to investigate the history of the reactor and track down any other surviving parts. The dense uranium block he received weighs about 5lb (2.3kg) and came wrapped in brown paper towels inside a small cloth pouch. The first task for Professor Koeth was to prove whether the cube was really from the Haigerloch reactor. The surface of it is pockmarked, which would be the case because of the early uranium processing methods used in the 1940s. The research team measured the energy of the gamma rays given off by the cube, which confirmed that it was made of natural, enriched uranium. The fact that the cube does not emit the specific type of gamma rays that come from the radioactive isotope caesium-137 means it had never been inside a working reactor.

The Germans were in a race with the USA to build the first atomic weapon, but there were not enough uranium blocks in the reactor to make it operational. However, Professor Koeth and his team have now discovered that there were another 400 cubes in the possession of a competing team of German scientists. If they had pooled their resources they would have been a step closer to making a functioning reactor. Those 400 cubes disappeared onto the black market in Europe after the war.

The B-VIII reactor was originally built by Nazi scientists in Berlin in the final days of World War II, but as the Red Army advanced and Berlinw as subjected to constant bombing, it was relocated to the town of Haigerloch in south-west Germany. Here the new lab was located underneath the town’s castle church in a converted potato and beer cellar.

At the heart of the reactor were the 664 uranium cubes, 2in square, like the one currently possessed by Professor Koeth. They were strung together in a chandelier-type arrangement and tied together by aircraft cabling. The core of the reactor was surrounded by a metal-encased graphite shell, which in turn sat inside a concrete-lined tank of water. The uranium chandelier itself was hung in heavy water, which would have regulated the nuclear reaction.

However, even if the German team had managed to get hold of the rest of the uranium needed, there were still issues. Professor Koeth explained, “Even if the 400 additional cubes had been brought to Haigerloch to use within that reactor experiment, the German scientists would have still needed more heavy water to make the reactor work.”

However, that was in short supply after the SOE blew up the German heavy water production facility at the Vemork Hydroelectric Plant in Telemark, Norway, in 1943. Norwegian resistance forces then sank the ferry which was to take the remaining reserves of heavy water back to Germany.

Professor Koeth revealed that, “Despite being the birthplace of nuclear physics and having nearly a two-year head start on American efforts, there was no imminent threat of a nuclear Germany by the end of the war.”

Today, the remains of the underground facility are open to the public, having been converted into the Atomkeller Museum.